Betty White on "The Golden Girls" taught me queer self-acceptance

I grew up in a conservative county in Kentucky. I went to church & did the right things, but love was conditional 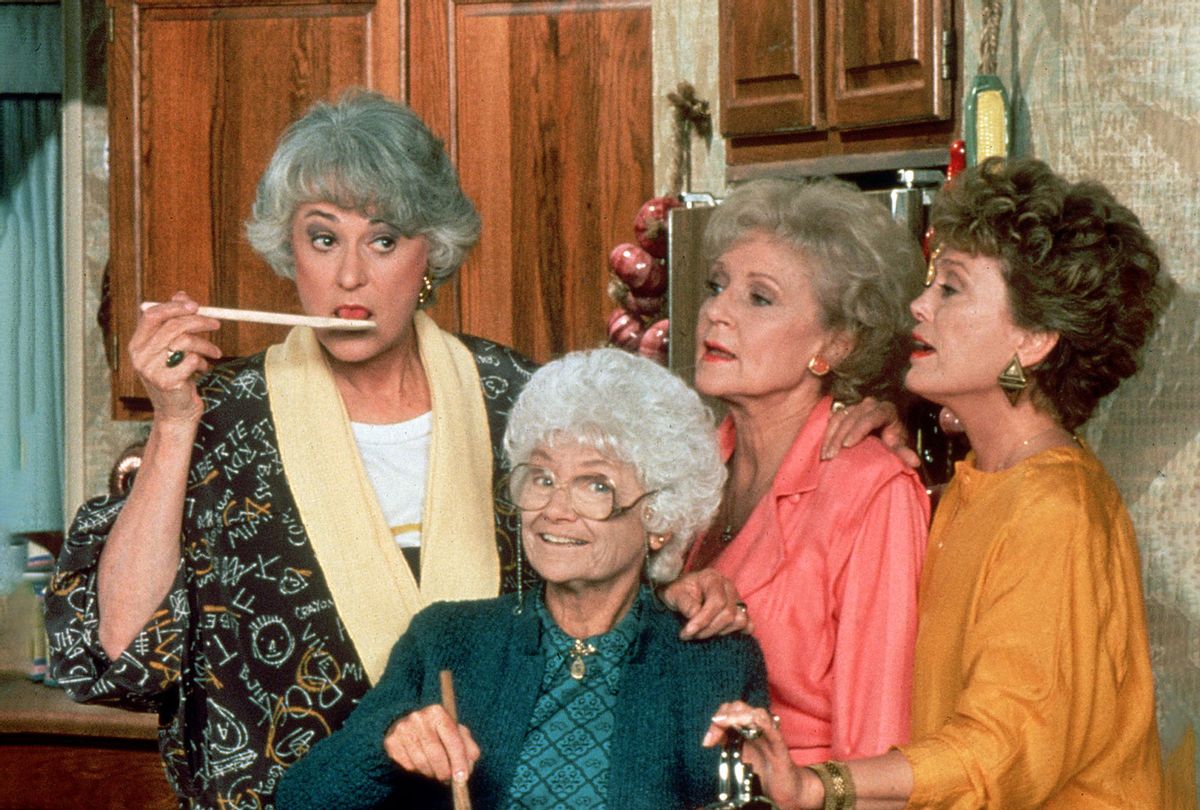 I was sitting in the living room of a friend's trailer the first time I saw "The Golden Girls." I usually ended up there when I needed an escape from my family and her house was the closest. I was 14 or 15 at the time, so by then the show was on as reruns. My friend made dinner for her kids, and in the background, three older ladies stood in a jail cell while a short white-haired woman in glasses said, "I can't believe these dumb cops would think anyone would pay money to sleep with you."

"What show is this?" I asked, but I already knew I wanted to watch more. Old women and humor — I was hooked.

My devotion to "The Golden Girls" began because the show was funny as hell. Dorothy's sarcasm and Sophia's one-liners were never-ending. The more I watched, the more I connected with them. Dorothy was an English teacher. Rose grew up in a rural, isolated place. Sophia was sassy and a hell of a cook. And Blanche, a southerner, had confidence a lot of women never achieve. They all embodied something I admired. I quickly became a super fan.

I grew up in a small conservative county in eastern Kentucky. I went to church on Sundays, and my friends were either from church or children of my parents' friends. In some ways, I was a typical girl. My mother put me in dance and gymnastics, and I wore dresses and sported hot-rolled hair just like all the other little ballerinas. But I wasn't little. I was at least six inches taller and much heavier than the others. As I got older, my differences grew along with my body. I was a tomboy. I ditched the long hair for a pixie cut. I played sports, hated dresses, and didn't wear makeup. There's a laundry list of things that made me different, but there was one I tried to hide. I was gay.

By the time I was 17, I'd seen most of the show — often out of order. But I hadn't seen the season 7 episode "Home Again, Rose," where the golden girls crash a high school reunion. Just as their lie is about to be uncovered, Rose clutches her shoulder, calls out for Dorothy, and passes out. We learn she suffered a heart attack. I was in a hotel on a school trip. We were in our rooms for curfew, and a few of us were playing cards. "The Golden Girls" played in the background, but I was the only one paying it much attention. When the episode ended and it was unclear whether Rose would make it, I stopped the card game.

"Wait! Wait! Time out. We have to see what happens to Rose!" I sat on the end of the hotel bed and waited for the next episode. My friends laughed, but I needed to know the fabulous foursome wouldn't be broken up.

At 17, I tried hard to be more acceptable. I spent four months on a liquid diet to lose weight and I was active in youth group. I was devoutly religious. I wanted to be enough for someone, for something, so I threw myself into church and religion, but even when I was trying so hard to do the right things, love felt conditional. I moved back home after college and felt even more isolated. By then I knew I was gay, but I could not reconcile that part of me with my religious beliefs. I even worked at a Christian television station — how was I supposed to try to come out? Instead, I developed coping mechanisms and ways to escape. I read. I wrote. I watched a hell of a lot of television. And every morning with my coffee, I watched "The Golden Girls." I was unhappy. But beginning my day with those four women gave me as much of a start as the caffeine.

I grew up in a region, a religion, a town, a family where the rules were clear: it was Adam and Eve, not Steve. When oppression is not just an event but a climate, it can separate you from yourself. But through it all, I had my maternal grandmother. She was the closest thing I had to unconditional love. She helped raise me, and as she aged and her health declined, I cared for her. In some ways, she was similar to Rose. She grew up on a rural farm. She was deeply good and somewhat innocent, and she was there to listen when someone needed to talk. She was the one person who would just let me be. She loved me. But she was also so devout in her religion I never came out to her. The one time I came close, a mere few weeks before she passed, I stopped myself. She was in a care home and in poor health. She told me about her physical therapist who had just gotten married.

"Her dress was pretty, but she married a woman."

I almost told her one day, I wanted to marry a woman. But her tone made me stop. I was afraid the truth would break her heart and then mine. 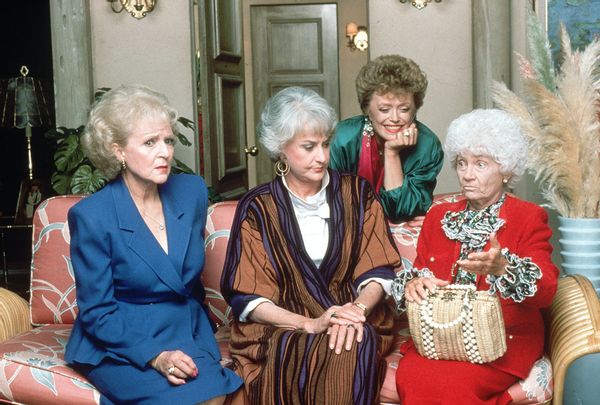 Rose gave me a different coming out story. In the season 4 episode "Scared Straight," Blanche's brother Clayton comes out to Blanche. It's Rose who encourages Clayton to tell Blanche. She says to Clayton, "She'd be upset, but not for long, and just think how it would help you two in the long run." The moment that sticks out to me is the way Rose treats Clayton when he tells her he's gay. She doesn't act shocked or make a disgusted face or scoot away from him. She doesn't tell him he's going to hell. She encourages him to be himself, and says, wisely, that the relationship's future actually depends on his being honest about who he is.

In the second season episode "Isn't It Romantic?" Dorothy's friend Jean is a lesbian who falls for Rose during her visit. Dorothy and Sophia already know Jean is gay, and in true Golden Girls style, Blanche is only upset because she thinks Jean should be attracted to her. When Jeans tries to cut her visit short, Rose tells her, "You only said what you were feeling. [. . . ] I don't understand these kinds of feelings, but if I did understand, and if I were, you know, like you, I think I'd be very flattered that you thought of me that way." She validates the experience. She says what is true: another person's affections are always a gift to handle with care.

That episode originally aired in November 1986, during the height of the AIDS epidemic. I can't imagine what it might have felt like at the time to have been gay and see an older straight woman get it. Rose was old and from a rural place and had few qualms about being friends with a woman who was attracted to her. That mattered to me. I grew up hearing the church grannies whisper about lezzies, and I heard the men who made threats about what they'd do if a homo ever came near them. I had learned at a very young age that I was supposed to hate myself because I was a threat. But I found relief in the ways the women on the show tried to care for people as they were. And Rose was the best at it.

I loved Sophia, met Rue McClanahan once, and in my personality, I am a Dorothy, but Betty White was the person who captured my heart. White's prolific career began way before "The Golden Girls" and extended far beyond the reach of the show. In the years leading up to my coming out, I learned she volunteered during WWII driving military supplies in Hollywood. That she was passionate about animals and worked with multiple charities and zoos to raise money for animal welfare. She was also an open advocate for LGBTQ rights and racial equity. Early on in her career she included Arthur Duncan, a black tap dancer, regular airtime on "The Betty White Show." In fact, when pressured, she refused to reduce his airtime. I liked watching her in "Hot in Cleveland" and movies like "The Proposal" because it felt like more of White's personality and expansive sense of humor were allowed to shine in ways it couldn't in Rose. I celebrated White when she hosted "SNL" and appeared in a Superbowl Halftime commercial. I loved that she could be at her wittiest, and wisest, she could be progressive and still have this undertone of goodness.

I had to permanently move away from my hometown in order to come out. It breaks something in you when you know the place that raised you doesn't want you. That first year after moving away, I worked hard to come to terms with who I was and what I'd been taught. And I looked for solace in many other things. I read Jeanette Winterson. I joined dating apps, then deleted them in a panic. I watched "The L Word" and "Queer as Folk." I felt both insecure and lost. But through all of it, I could turn on "The Golden Girls." I felt safe with them.

The day Betty White died, my wife and I were driving home. She was in the passenger seat, scrolling through Instagram and I heard her gasp.

"I think she did. People are posting."

It felt a little ridiculous, but I couldn't stop my tears. I was almost 32 years old when I started coming out to people. It was not an easy process, and it has meant some of my friendships have dissipated or changed. But my life feels more honest now than it ever has. I'm happy. I wish my grandma could see me now.

When we pulled into our driveway, I full-blown ugly cried for a 99-year-old woman I have never met. Even now, days later, I tear up, and it isn't just because I loved "The Golden Girls." It's because Betty White embodied kindness. She lived it. For me, her kindness was there when I needed it most, like the best kind of friend.

Savannah Sipple is a writer from east Kentucky. Her debut poetry collection "WWJD and Other Poems" (Sibling Rivalry Press, 2019) explores what it is to be a queer woman in Appalachia and is rooted in its culture and in her body. With a beer-drinking Jesus as her wing man, she navigates this difficult terrain of stereotype, conservative Evangelicalism, and, perhaps most, shame. Her poems have recently been published in Appalachian Heritage, Waxwing, Talking River, The Offing, and The Louisville Review. She is also the recipient of grants from the Money for Women/Barbara Deming Memorial Fund and the Kentucky Foundation for Women