Remembering Betty White, America's grandmother and the first lady of television, dead at 99

White's more than 80-year career earned her generations of fans. She's one of the rare things Americans agree upon 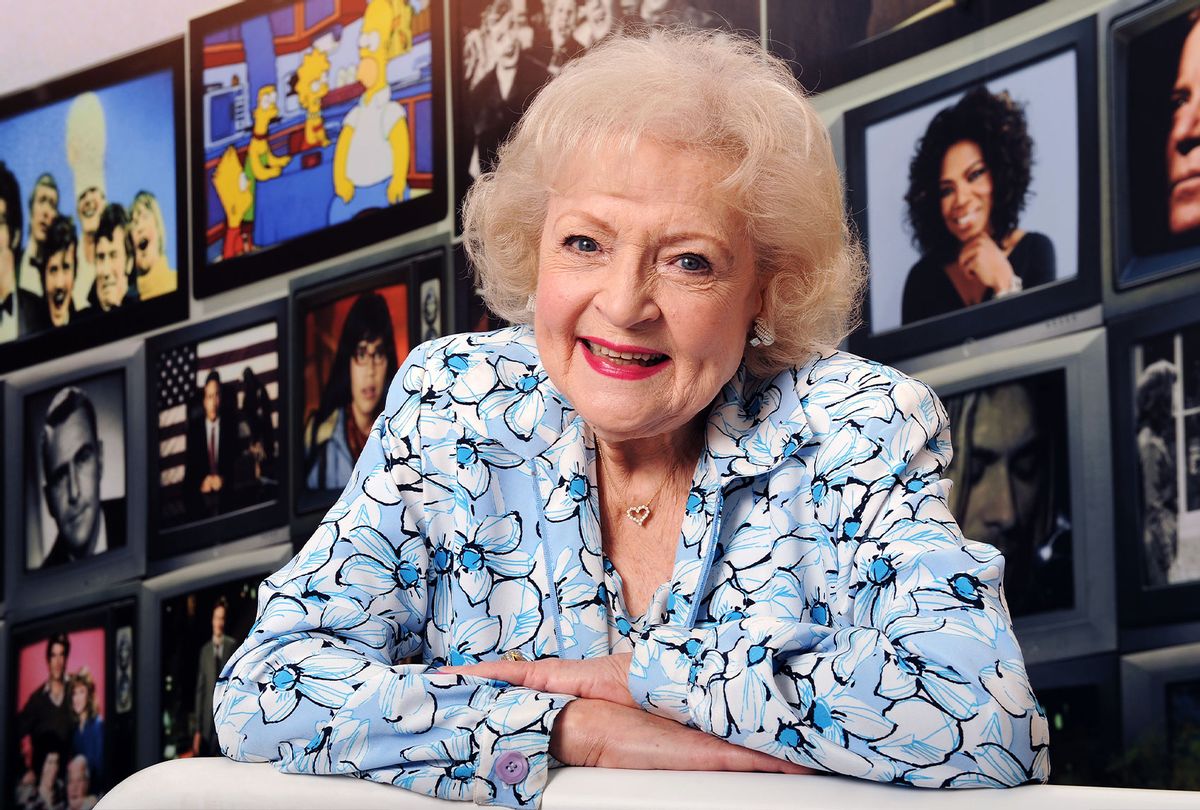 Legendary actress Betty White during portrait session on March 29, 2011 at the Museum of Radio and TV in Los Angeles, California. White talked about her career and her new book called "If You Ask Me". (Bob Riha, Jr./Getty Images)
--

Betty White, the five-time Emmy Award winner died Friday morning, reports said, leaving behind legions of fans who came to love her over the course of a storied career spanning more than 81 years. She was 99.

TMZ first reported the news of White's death, citing police sources who confirmed that she passed away at home just weeks before her 100th birthday.

"Even though Betty was about to be 100, I thought she would live forever," her agent and close friend Jeff Witjas told PEOPLE. "I will miss her terribly and so will the animal world that she loved so much. I don't think Betty ever feared passing because she always wanted to be with her most beloved husband Allen Ludden. She believed she would be with him again."

The near-universally beloved entertainment icon best known for her starring roles on "The Golden Girls" and "The Mary Tyler Moore Show," is remembered for being game for almost anything.

America got a reminder of that back in 2010 when White appeared in a Super Bowl commercial for Snickers, where she appeared to be knocked into a mud puddle during a football game with much younger men. "Mike, you're playing like Betty White out there!" a teammate screams in her face a millisecond before she shoots back with, "That's not what your girlfriend says!"

It bowled over millions of viewers, ignited a Facebook-based campaign to get White to host "Saturday Night Live" – which she did months later, becoming its oldest host at 88 – and introduced her to an entirely new generation of fans.

"When I first heard about the campaign to get me to host 'Saturday Night Live,' I didn't know what Facebook was," White said in her monologue. "And, now that I do know what it is, I have to say, it sounds like a huge waste of time. I would never say that people on it are losers, but that's only because I'm polite."

Well, not too polite. White's reputation for ribald riffing became the stuff of memes, including one quote that she swears she didn't say, an assertion confirmed by Snopes: "Why do people say 'grow some balls'? Balls are weak and sensitive. If you wanna be tough, grow a vagina. Those things can take a pounding."

"That's what I hate about Facebook and the internet," she told The Guardian back in 2012. "They can say you said anything. I never would have said that. I'd never say that in a million years."

RELATED: The worst film performances of 2021

That may be the case, but it also discounts the reason that misattribution has such legs. We can completely imagine her saying it and wouldn't have loved her any less if she had. Remember, she might not have uttered that particular quote, but this is still the woman who, in 2011, collaborated with British pop singer Luciana on a remix of the star's club hit "I'm Still Hot," appearing in a video surrounded by beefcakes barely swathed in tight gold hot pants.

And according to People, she did say: "My answer to anything under the sun, like 'What have you not done in the business that you've always wanted to do?' is 'Robert Redford.'"

It is no exaggeration to say America adored Betty White. Whether this adulation is a result of connecting with her "Golden Girls" character Rose Nylund; or Sue Ann Nivens, the tart-tongued, sex-loving frenemy of Moore's Mary Richards; or her work on the many series she's starred in or produced since then, her appeal spans multiple generations and transcends partisanship.

White described herself as apolitical and did not identify as a feminist even though, as her lengthy list of outspoken characters she's played indicates, she had few problems with playing them on TV, particularly in a subversive manner.

As for her politics, White may not have declared for a particular party but her advocacy behind the scenes did not go unnoticed. In 1954 she discovered tap dancer Arthur Duncan, who would become the first African-American regular to be featured on a variety series with his work on "The Lawrence Welk Show."

RELATED: These MVPs of television delivered greatness in a year that almost broke us

Duncan, who was featured in 2018 PBS documentary "Betty White: First Lady of Television," told critics covering a PBS event promoting the film that he worked with White on her nationally distributed talk variety series for NBC, "The Betty White Show." Back in the 1950s, he said, "They had people from various areas . . . that sort of resented black Americans on the program and they threatened to withdraw their support of the show if I continued on the show."

Duncan said he wasn't aware of the racist backlash to his appearance until White wrote about it in one of her memoirs.  "And she explained it this way," Duncan recalled. "Her remark was, 'Needless to say, we used Arthur Duncan every opportunity we could.' . . .  I think that she just stood up for her beliefs, and that ended that."

For every person wishing "America's Grandmother" were actually their own, there are others who aspire to be like her in their mature years: bright, playful, mischievous, devoid of apology or, at least outwardly, regret. White is the only woman to win Emmys in all performing comedic categories, receiving her first nomination in 1951 and her most recent in 2011.

She also was the kind of woman "Tenet" star and future Batman Robert Pattinson would refer to with complete sincerity as "one of the sexiest women in America."

And she remained busy well into her 90s, starring TV Land's "Hot in Cleveland" between 2010 through 2015, and the NBC prank series "Betty White's Off Their Rockers" from 2012 and 2017.  Her voice talents can be heard in a many children's series, including the 2019 Disney+ series "Forky Asks a Question," a spinoff of its "Toy Story" franchise. (She voiced a toy tiger called Bitey White.)

Cinephiles may recognize her feature film debut in Otto Preminger's 1962 drama, "Advise & Consent." But it's equally as likely for people to recall her roles in the 2009 rom-com "The Proposal," or 1999's "Lake Placid." Like we said – she was game for just about anything.

Betty Marion White Ludden was born on January 17, 1922, in Oak Park, Illinois, the only child of electrical engineer Horace White and his wife Tess, a homemaker. Her family moved to Los Angeles when White was two years old, and she grew up on Sunset Boulevard.

She began her Hollywood career working as an assistant at a local television station, and made her TV debut shortly after graduating from high school in 1939, according to the Guinness Book of World Records. White holds the record for Longest TV Career By an Entertainer (Female).

In 1949, White became the co-host of "Hollywood on Television with Al Jarvis," a local live and unscripted variety show that ran for five and a half hours a day, six days a week. This led to her becoming one of Hollywood's first female producers when, in 1953, she launched her first TV series "Life with Elizabeth," which she developed with screenwriter George Tibbles, her partner in Bandy Productions alongside producer Don Fedderson. Tibbles would later work with White on NBC's "The Betty White Show" in 1954.

For 19 years, during most of the 1950s and 1960s, White served as the hostess and commentator on NBC's annual broadcast of Tournament of Roses Parade. NBC replaced her in 1975 due to the popularity of "Mary Tyler Moore" on network rival CBS, which responded in kind by naming White as hostess of the Macy's Thanksgiving Day Parade, a job she held for a decade.

In the 1960s White became a celebrity guest staple on game shows  – particularly "Password," where she popped up many times between 1961 and 1975 – marrying the show's host Allen Ludden, in 1963. (Ludden was her third husband, and they remained together until his death in 1981.) Her string of appearances on these daytime staples eventually earned her the unofficial title of "First Lady of Game Shows."

But in 1983, she became the first woman to win a Daytime Emmy Award in the Outstanding Game Show Host category for her work on NBC's "Just Men!," mostly memorable for its role in securing White another piece of Academy of Television Arts & Sciences hardware.

Her appearances on "The Mary Tyler Moore Show" as the "icky sweet" Sue Ann Nivens snagged White her second and third Emmys, but her portrayal of the daffy, "terminally naïve" Rose Nylund, of the iconic "Golden Girls" foursome, earned White her fourth.

And it is White's work on the 1980s hit that cemented her popularity among Generation Xers, Millennials, and Zoomers. White originally read for the part of Blanche Devereaux, the legendary seductress played by Rue McClanahan, but at the suggestion of the pilot's director Jay Sandrich, they switched roles. The rest is history.

White went on to reprise Rose after "The Golden Girls" ended in 1992 with Bea Arthur's departure, in the show's short-lived spinoff "The Golden Palace." From there she remained in front of TV audiences by way of guest starring appearances on '90s series such as NBC's "Suddenly Susan," CBS' "Yes Dear," and the ABC drama "The Practice," and earned yet another Emmy in 1996 for her guest star appearance on "The John Larroquette Show."

White was formally inducted into the Academy of Television Arts & Sciences Hall of Fame in 1995, receiving a star on the Hollywood Walk of Fame in 1995. The Television Critics Association honored her with the TCA Career Achievement Award in 2009, and she won a Grammy for Best Spoken Word recording in 2011 for her work on the audiobook version of her book "If You Ask Me (And of Course You Won't)."

On top of her massive TV resume, White was a lifelong animal rights and welfare advocate who worked with many organizations, and served as a member of the board of directors of the Greater Los Angeles Zoo Association since 1974.

White had no children of her own but is survived, instead, by a formidable legacy built on a deep foundation of hilarity, fortified with substance. She made us laugh and smile a lot over the decades, but according to her own report, never compromised her sense of self.

"You can lie to anyone in the world and even get away with it, perhaps," she observed in "If You Ask Me," "but when you are alone and look into your own eyes in the mirror, you can't sidestep the truth. Always be sure you can meet those eyes directly."

Correction: An earlier version of this story contained an error in the character Blanche Devereaux's name. The story has been updated.