Sea levels have been rising since the American Civil War. The reason? Coal 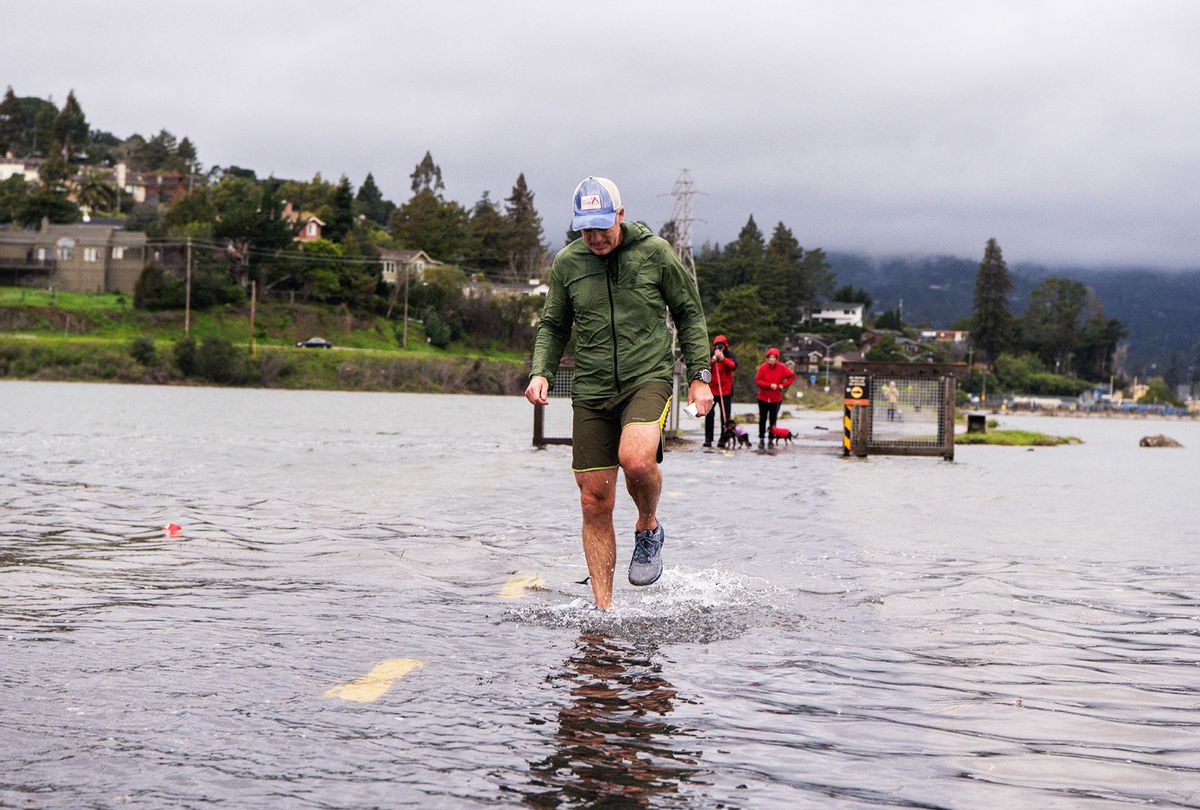 A jogger makes his way along a flooded Sausalito/Mill Valley bike path during the "King Tide" in Mill Valley, California on Jananury 3, 2022. - "King Tides" occur when the Earth, moon, and sun align in orbit to produce unusually high water levels and can cause local tidal flooding. Over time, sea level rise is raising the height of tidal systems. (JOSH EDELSON/AFP via Getty Images)
--

The American Civil War was well underway by the time President Abraham Lincoln issued the Emancipation Proclamation in 1863. Coincidentally, new findings show that global patterns of modern sea-level rise first emerged that same year. Though climate change and rising tides may have seemingly nothing in common with the famous, if symbolic, gesture of freeing slaves, they are more connected to Civil War than one might assume.

Nowadays, we associate climate change with clogged highways full of gas-guzzling cars and smoke stacks belching fumes from coal-fired power plants. But in the mid-19th century, climate change certainly was not the problem that it is today; but coal, which still powers 20 percent of the electrical grid today, was fueling an era of industrialization. Revolutionized by the coal-powered steam engine, transportation in the form of steamboats and railroads ultimately aided Union victory in what has been described as the first modern war.

There is broad consensus at this point that climate change started in the mid-19th century, and little doubt that burning fossil fuels, primarily coal, is the cause.

"Sea level rise is a really important indicator of broader climate change," writes Dr. Jennifer Walker, a Rutgers University professor in the Department of Earth and Planetary Sciences. "If we can estimate when sea-level rise really emerged from background variability, we can pinpoint this onset of a significant period of climate change."

"The fact that we're seeing an emergence of modern rates of rise at all of these individual study sites as well by the mid 20th century just further demonstrates the really significant influence of global sea-level rise especially in the last century," she explained. "By delving into individual sites the better understanding we have of regional and local processes impacting sea-level rise will continue to improve our understanding for future impacts."

Utilizing a global database of geological sea-level records from the past 2,000 years, the international team of researchers modeled global and site specific sea-level rise. They determined that in the United States, modern sea-level rise can be discerned earliest in the Mid-Atlantic region somewhat later in the 19th century. By doing so, they hope to facilitate a better understanding of local processes driving variations in sea-level changes.

"In the North Atlantic it seems that the spatial pattern is driven by more regional ocean and atmospheric changes," she added. "By diving into individual sites in more detail we're getting an understanding of these other driving processes of sea level change. When we think about broader climate change we want to know what's happening, but it's really important to understand on these more local levels what processes are really causing the change. That's the kind of information we need to plan for and project future sea-level rise at individual locations."

As climate change continues to accelerate sea-level rise this knowledge is crucial to climate adaptation. This study focused on the North Atlantic but can provide a map for governments to use the same statistical model in the study to tailor climate responses to regional variations of specific sites.

The study comes as a new report from the National Oceanic and Atmospheric Association  projects an average sea-level rise in the contiguous United States of nearly a foot by 2050 regardless of emissions levels.

"Monitoring the sources of ongoing sea level rise and the processes driving changes in sea level is critical for assessing scenario divergence and tracking the trajectory of observed sea level rise, particularly during the time period when future emissions pathways lead to increased ranges in projected sea level rise," the report reads.