Urban renewal under the guise of “going green” isn’t working — for the environment, or for residents 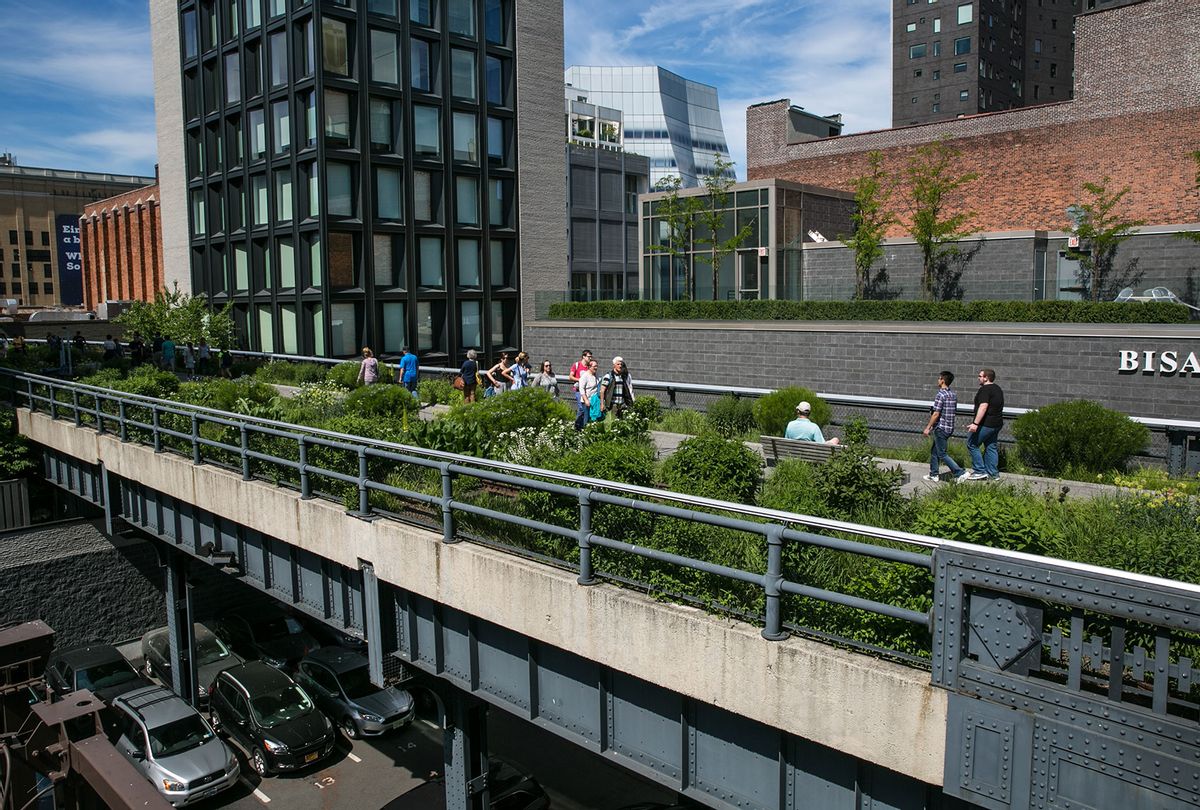 Running just under one and a half miles long and featuring a beautiful array of botanical gardens and art sculptures, the High Line — an elevated park in Manhattan — is a major recreational attraction to both tourists and native New Yorkers alike. Created in 2009 and inspired by the Promenade plantee in Paris, the final section of the High Line, known as "the Spur," was completed in 2019. Since then, annual visits to the High Line jumped from 5 million to 8 million people.

But despite its immense popularity and often being touted as a success story in urban renewal, the High Line is not a boon to all. A 2020 study of the High Line found that its creation directly led to a 35% increase in home values in the area. While that might be good news for homeowners, over 75 percent of Manhattanites are renters and more apt to be evicted or suffer rent increases as a result.

Built over a formerly derelict section of the New York Central Railroad West Side Line, the walkway and area immediately surrounding the High Line prior to its construction were often characterized as "gritty." The nearby Chelsea section of Manhattan, where two large public housing developments are located, is historically home to many Black and brown residents. However, the High Line's cascading price impacts on surrounding real estate spurred rapid closures of local businesses and pushed many lower income renters out of the area.

The High Line isn't an isolated cautionary tale. Many municipalities are pushing for or have implemented "green" features that have led to major rent hikes in the area — and, in turn, displacement of working class and low income families. In fact, the phenomenon is so commonplace it even has a name: eco-gentrification.

The sad irony is the people most likely to be displaced by eco-gentrification are those most in need of its benefits. In the past few years, there has been an emergence of research confirming that low income communities  — and particularly low income communities of color  — have far fewer trees and conservation lands in their borders as compared to more affluent communities.

This scarcity of green space contributes to profound public health inequities, including greater rates of asthma and other respiratory illnesses. Lack of tree cover also translates into actual temperature disparities, with poorer neighborhoods experiencing more sweltering conditions in the summer months and higher incidences of heatstroke.

"Gentrification wouldn't be as much of a problem if displacement didn't follow," says Melissa Checker, an associate professor of anthropology and environmental psychology at the CUNY Graduate Center and the author of The Sustainability Myth, a book that examines eco-gentrification in New York City.

"The problem is 'greening' projects get tied to property values," says Checker.

And it isn't only parks and greenways that can cause eco-gentrification.

In the Boston metro area, since plans for the Green Line extension of the subway for the Union Square section of the City of Somerville were finalized in 2016, property values for that neighborhood have increased approximately 40 percent. Union Square is home to a large population of Haitian, Brazilian and Latinx communities and cultures that are gradually disappearing with escalating rents.

Over in Boston proper itself, the opening of the Blue Hill Avenue station in Dorchester (a Black-majority neighborhood) as part of the Fairmount Line of the commuter rail ushered in steep rent increases that threaten the ability of long-time residents to remain in the area.

"The lack of stops was accurately described as transit racism….the trains went through communities of color but hardly stopped there," a spokesperson for City Life/Vida Urbana  — a Boston tenants' rights organization that was part of the coalition that advocated for the opening of the Blue Hill Avenue station  —  wrote in an email to Salon. "At the same time…all social efforts by community activists to improve the neighborhood create value that is then privatized by real estate investors in the form of raising rents and flipping buildings."

This real estate response is enabled by a larger pattern of local governments in urban and ex-urban communities across the country embracing free market-friendly "Yes In My Backyard" policies. Such policies usually favor new development projects that foster increased "density," often boasting of their climate benefits, regardless of their affordability to residents.

Yet one major study from UC-Berkeley found that the carbon savings from dense cities and suburbs are usually undermined by the sprawl they cause. The study authors also indicated that densifying suburbs could in fact potentially increase carbon emissions by creating their own sprawl and offshoot suburbs, as well as concentrating affluence. Indeed, people with higher incomes have much higher carbon footprints than those with lower incomes and as such, more affluent neighborhoods and towns have higher carbon emission rates.

As rent prices increase with the growing density of a given community, lower income people are often displaced and so are less able to access the improved public transit and the other green features that often go along with density plans.

"[W]hen low income people are pushed further and further out, it increases their emissions for traveling by cars—cars that are often less efficient and emit more [greenhouse gasses]," says Jennifer Rice, an urban geographer with the University of Georgia, who has researched eco-gentrification trends in Seattle.

Further compounding this problem is a growing trend of rental buildings being built with little-to-no off-street parking spaces partially as an effort to "go green." Some affordable housing complexes are even attempting to mandate that tenants do not own cars at all in the name of sustainability. However, car ownership among lower income demographics is strongly linked to greater job stability and economic mobility and — for chronically ill and disabled folks  — significantly better healthcare access.

Instead, Spotts suggest municipalities employ an on-street parking permitting system as a way to reduce or eliminate off-street parking spaces for new developments. This would help lower a development's environmental footprint (not to mention, construction costs) without risking the consequence of pushing low income residents who need cars for work or healthcare needs out of the area — and upping their emissions as a result.

Spotts also recommends that policymakers "Pay more attention to buses, which lower income people use … more than trains" as improving and extending bus services tends not have the same level of influence on rent prices as rail or subway extensions do.

When asked about other ways to ensure greening efforts in communities don't displace marginalized residents, researchers on eco-gentrification consulted for this article all had one common response: expanding investments in low income housing.

"If cities require inclusionary zoning with units affordable for households who make 80% of the Area Median Income, it is unlikely that low-income folks can afford them," says Alessandro Rigolon, an assistant professor at the department of City & Metropolitan Planning at the University of Utah.

"Mainstream thinking that just getting out of the way for developers to build more and more — often called 'increasing supply' is not going to get us out of the affordability or carbon gentrification problem," says Rice, who notes that most developers are not interested in building low income housing in hot market neighborhoods. "We really need massive investments in public green housing."

Additionally, new developments tend to mostly contain one bedroom or studio apartments as a way to be "greener" — which can pose a major problem for low income families.

"One bedrooms and studios are cheaper units to build….[but] these are clearly too small for families, and especially multi-generational families…who might be at risk of displacement," says Rigolon. "So unit size also needs to be considered….to help longtime residents of color remain in their neighborhood."

Other solutions to eco-gentrification could be re-examining policies that were expected to increase equity via greening efforts but instead have had the opposite impact.

Though it is a state law, municipalities in the Commonwealth can opt to adopt the CPA by ballot vote. The Act then requires those municipalities to contribute funds from their own property taxes to subsidize their intended projects, that the state government then subsequently matches.

As any proposed projects are required to be partially funded by property taxes, it automatically privileges upper class towns and cities over financially disadvantaged ones. Some reports have suggested the CPA has enabled some white-majority communities in the state to conserve and add green spaces — and as a result, grow their affluence — while largely forsaking (or even altogether abandoning) the other major goal of the Act's creation: funding affordable housing.

So, while greening projects in traditionally depressed communities can increase rents and push low income people out, programs like the CPA can also be used in already-affluent towns in Massachusetts to invest in "sustainable" projects at the expense of affordable housing. This has had the consequence of making these advantaged communities even more elite and exclusionary — and their green amenities even more inaccessible — to low income individuals.

These kinds of impacts are why Checker believes there should be increased investments in rental voucher programs like Section 8, as well as tighter regulations on rental prices through policies like rent control and stabilization.

The spokesperson for City Life/Vida Urbana, which is a proponent of recent legislative attempts to return rent control — which was banned in Massachusetts by ballot vote in 1994  — back to the Boston area, couldn't agree more: "We back the [environmental] improvements, but we demand some control over the market that escalates rents."

Read more on cities and environmentalism: