What's the difference between Italian gelato and ice cream, anyway? 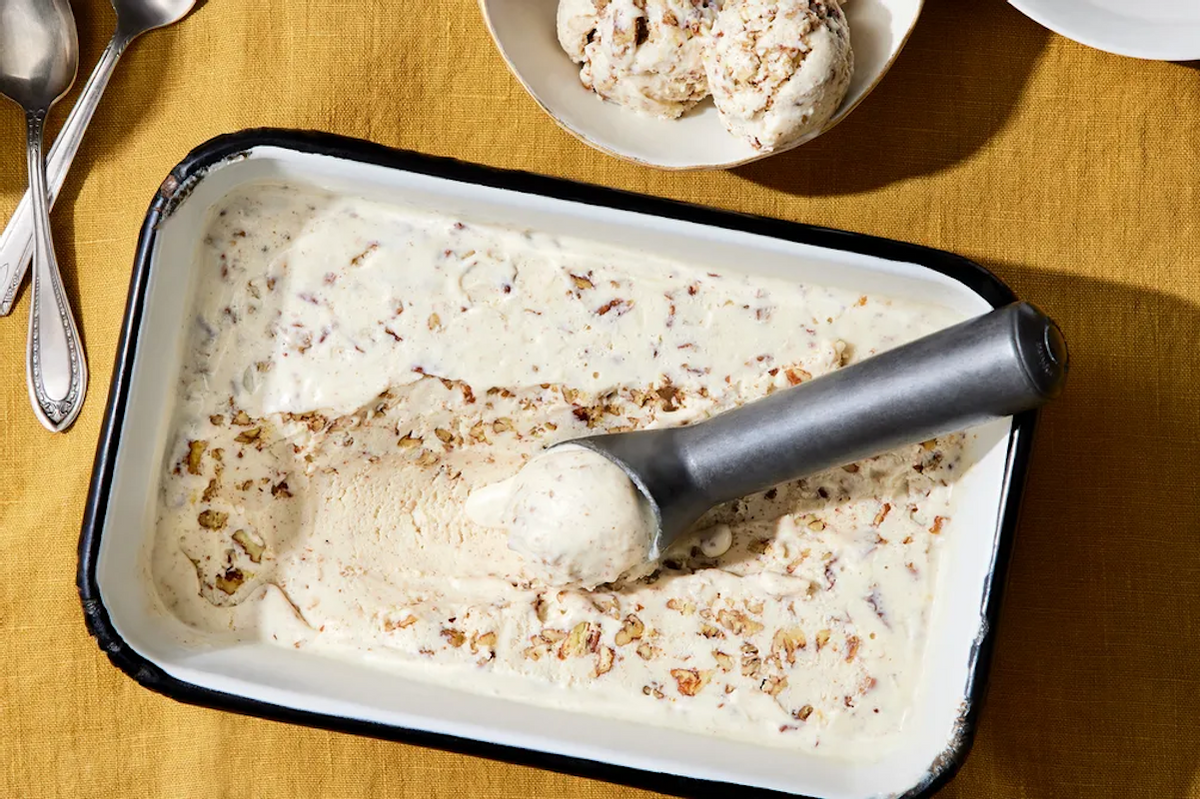 Writing this guide to gelato and why it's different from ice cream took me far longer than it should have because the truth is, I was planning my Italian honeymoon, which means deciding where to get gelato each day and night. I've imagined walking around Piazza Navona with a cup of limone gelato in one hand and a cone of stracciatella in the other. I've imagined being greeted by the hotel concierge with a pint of pistachio and receiving a tour of the Colosseum while housing a double scoop of tiramisu. I love ice cream, too, but you can't exactly watch a svelte man named Luca form the perfect cone of nocciotella inside a building older than the United States of America. But aside from the setting, what's the difference between Italian gelato and ice cream, anyway?

"It's really a question of semantics. Gelato is just the Italian word for ice cream. However, there are definitely certain qualities that gelato tends to have, and a different set of qualities that ice cream tends to have but it really depends on the individual producer," says Hallie Meyer, owner of Caffè Panna, a New York City-based shop that churns out Roman-inspired gelato. Dr. Robert Roberts, Professor and Head of Food Science at Penn State University, adds that gelato can also include sorbet, water-based gelato, and high-fat dairy products.

Traditional versions of Italian gelato and ice cream both usually contain some combination of milk, cream, eggs, and sugar, but neither has to. As Meyer said, this is by no means a hard and fast rule. For example, most fruit-based gelato flavors like lemon, raspberry, and blood orange are often entirely dairy-free. Gelato and ice cream may contain egg yolks, creating a custard base, or they might be made with no eggs at all.

One thing that's almost always true about Italian gelato is that it's churned at a much slower speed than American ice cream, which typically creates a denser, richer frozen dessert.

While there aren't regulations about how gelato is made, there are very strict guidelines set by the U.S. Food and Drug Administration about ice cream: "Ice cream contains not less than 1.6 pounds of total solids to the gallon, and weighs not less than 4.5 pounds to the gallon. Ice cream contains not less than 10 percent milkfat, nor less than 10 percent nonfat milk solids, except that when it contains milkfat at one percent increments above the 10 percent minimum." Confusing government jargon aside, this proves that the process for making ice cream is much more standardized than gelato.

If you pull a pint of store-bought gelato from the freezer, you might think your refrigerator is broken. That's because gelato is generally churned at a slightly warmer temperature and served at around 4℉ to 7℉. The warmer temperature means that the product will be softer, which is why gelato is not scooped, but rather collected using a paddle to form a scoop-like shape. Ice cream, on the other hand, is usually served below 0℉, which means that it's easier to get a perfect round shape using an ice cream scoop. "If you're in a gelato shop and they're scraping it, they're doing something wrong," says Meridith Ford, owner of Cremalosa Gelato in Decatur, Ga.

Another thing that sets gelato and ice cream apart is that gelato is, traditionally, served much fresher. "Gelato is usually made and sold within 48 to 96 hours because it's not hardened," says Dr. Roberts.

When you think of American ice cream, what comes to mind? For me, it's kooky flavors like Cookie Monster (a gastronomical masterpiece, in my opinion), cake batter, Rocky Road, and a collection of pints created by late-night talk show hosts, cookie dough-brownie batter hybrids. Italian gelato, on the other hand, tends to consist of more dialed back, traditional flavors like pistachio, lemon, hazelnut, stracciatella, and tiramisu. In Sicily, you'll find more fruit-based gelato flavors, says Ford. But these are not hard and fast rules. The craziest flavor you'd find at an old-fashioned, all-American ice cream shop might be Rocky Road or Moose Tracks. In Rome, Meyer points to Otaleg as an example of a gelateria pushing the envelope with flavors like cinnamon cake or barley and coffee.

Meyer and Ford both agree that gelato has a stigma for being fancier or more luxurious because it's Italian, but they say that it all comes down to the quality of ingredients. Ice cream is highly regulated in the States, whereas in Italy, Meyer says gelato-making comes down to a common set of widely acknowledged norms. But that soon may change. "A bill has been introduced into the Italian parliament so that gelato can be designated in somewhat the same way that wine is," says Ford. "If passed, the bill will require gelato to be designated as 'artizionale,' which means that it's made by hand with high-quality ingredients. Right now, anyone can call it artizionale and it may not actually be handmade," she adds. This will also likely mean that high-quality gelato will be, deservedly, at a higher price in Italy and abroad.

"Gelato tends to be more expensive in the States, but it all depends on how high-quality the ingredients are. My pistachio is super expensive because I import Sicilian pistachio paste, whereas my Oreo flavor is very cheap because I use all domestic ingredients," explains Meyer. Additionally, ice cream or gelatos made with homemade cookie dough or brownies, for example, will likely drive the price up because they're labor-intensive and therefore, expensive to produce.

For what it's worth, my paycheck might as well be deposited directly into these gelaterias.