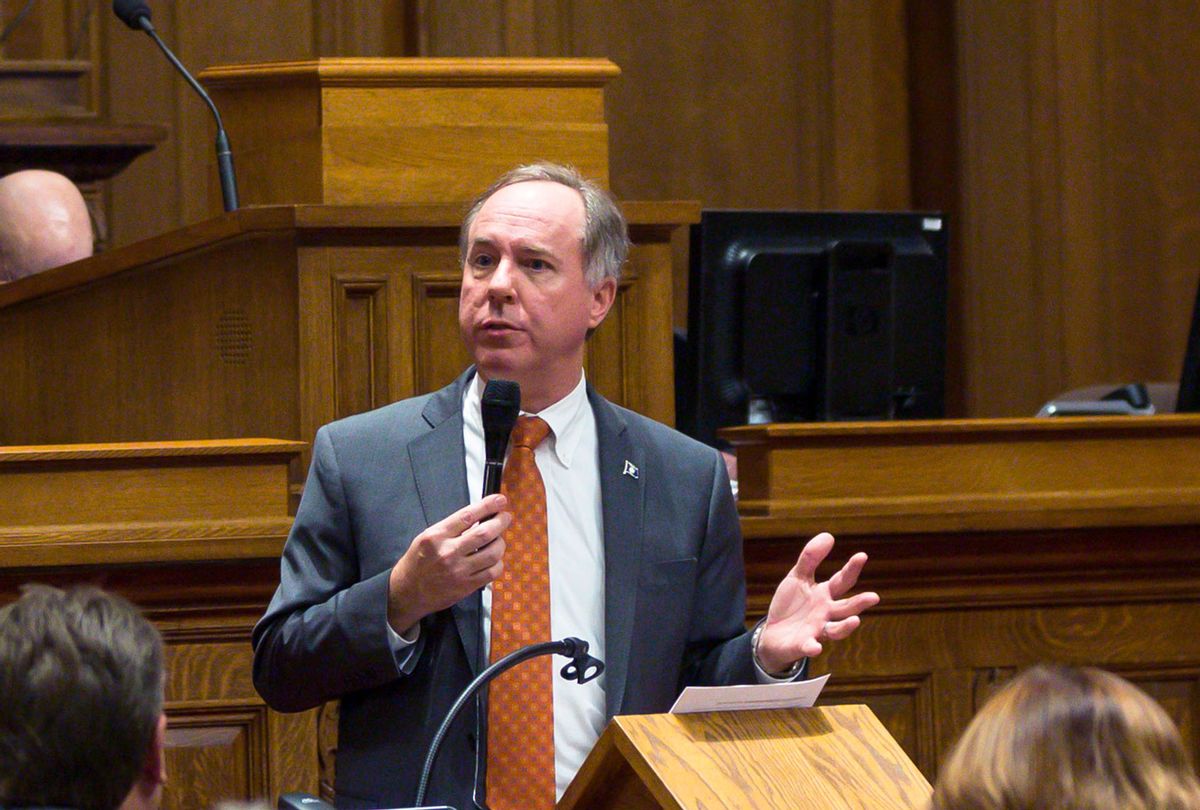 A former state Supreme Court justice leading Wisconsin Republicans' investigation into the 2020 election echoed a slew of debunked conspiracy theories and suggested that lawmakers should move to decertify Joe Biden's victory in the state, even though there is no legal mechanism for doing so.

Michael Gableman, who spoke at a pro-Trump "stop the steal" rally fueled by conspiracy theories before he was hired by Republican Assembly Speaker Robin Vos to investigate the election, released his interim report on Tuesday ahead of a legislative hearing on his probe.

Gableman, who has previously claimed without evidence that the election was stolen, and traveled to MyPillow founder Mike Lindell's election conspiracy symposium, suggested that the state election board had broken the law by sending absentee ballots to nursing homes. He also suggested a conspiracy by Milwaukee, Green Bay, Madison, Racine and Kenosha — Wisconsin's largest cities — to boost Democrats because they received grant money to help administer the election during the pandemic from Center for Tech and Civic Life, which is funded by Facebook founder Mark Zuckerberg. More than half the state's counties received funding from the nonprofit, as did 2,500 other election offices across the U.S., but Gableman claimed that the funding favored Democratic areas, saying the grants elsewhere were "insubstantial" and alleging that Zuckerberg "bought the 2020 election for Biden."

Gableman told lawmakers on Tuesday that they should consider decertifying the election results, even though Vos acknowledged last month that doing that would be "impossible."

"I believe the Legislature ought to take a very hard look at the option of decertification," Gableman testified to a state Assembly committee on elections, according to Politico.

His claim that the election could be decertified was refuted by the legislature's own attorney during the same hearing.

"Our position is that once the electoral votes have been received by the Congress, that closes the door. The election is then done," the attorney said.

Rick Hasen, an election law expert at the University of California, Irvine, called Gableman's claim that the state could decertify the election "utter, utter bullshit."

"This is a bad joke that will only serve to undermine further Wisconsinites faith in an election system that used to be the envy of the entire nation," he tweeted. "Despicable, disgusting, irresponsible. Gableman's actions today are horrible."

Gableman's report acknowledged that even if the state could decertify the election, "this action would not, on its own, have any other legal consequence under state or federal law. It would not, for example, change who the current president is."

"This is IMPOSSIBLE," she tweeted. "NOT LEGAL."

Wisconsin Gov. Tony Evers, a Democrat, said that Gableman's investigation had "long surpassed being a mere embarrassment for our state."

"This effort has spread disinformation about our election processes, it has attacked the integrity of our clerks, election administrators, and poll workers, and it has emboldened individuals to harass and demean dedicated public servants," Evers said in a statement. "Enough is enough. Republicans in the Legislature have always had the ability to end this effort, and I call on them to do so today."

Even some Wisconsin Republicans, who have tried to placate pro-Trump diehards' debunked election conspiracy theories — even though numerous recounts, audits and investigations have found no evidence of widespread fraud or irregularities, suggested it was time to move on from the 2020 race.

"I can guarantee that I will not be part of any effort, and will do everything possible to stop any effort, to put politicians in charge of deciding who wins or loses elections," Assembly Republican Leader Jim Steineke said on Twitter. "Handing authority to partisan politicians to determine if election fraud exists would be the end of our republic as we know it," he wrote.

Wisconsin lawmakers have already passed an onslaught of new voting restrictions, but they were blocked by Evers, who faces a tight re-election contest in November. Gableman's report further urged Republicans to make it easier to decertify future elections.

"In the event of widespread contest, the thumb should be on the scale in favor of withholding certification of electors," his report said, arguing that the decision to certify should be left to a "politically accountable body" rather than the state's elected governor.

Despite Republican pleas to move on, Gableman said that his work would continue with full support from Vos despite acknowledging that it is unclear whether his contract with the state would be extended.

"I'm going to keep going, whether anyone signs a contract or not," he said Tuesday. "This is just the beginning of the investigation."

Republicans have already paid Gableman $676,000 in taxpayer money since he launched his probe last summer. Gableman said he has been unable to complete his investigation because "witnesses" have refused to cooperate. Gableman recently sought a court order to jail several big-city mayors and election officials for refusing to sit down for closed-door depositions.

Sen. Tammy Baldwin, D-Wis., accused Gableman of stoking conspiracy theories to pander to Trump supporters who have refused to accept his defeat.