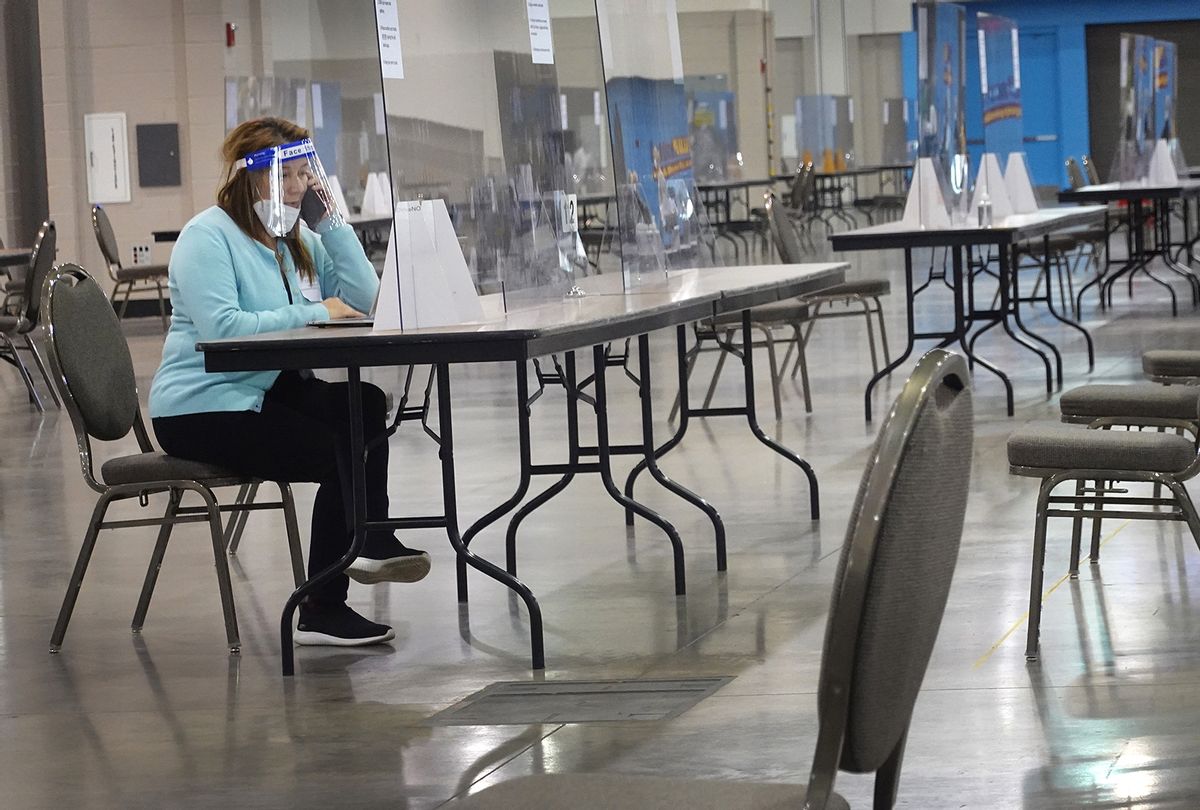 Wisconsin election officials wait as procedural issues are argued during the process of recounting ballots from the Nov. 3, 2020 election. (Scott Olson/Getty Images)
--

A conservative group investigating allegations of election fraud in Wisconsin was unable to find any evidence of wrongdoing or miscounting that would have affected the state's 2020 results.

Wisconsin Institute for Liberty and Law (WILL), the group in charge of the 10-month investigation, examined nearly 20,000 ballots and 29,000 absentee ballots, writing in a report that it found "no evidence of widespread voter fraud," according to Forbes. Just 42 ballots were confirmed to be someone voting on behalf of someone who was deceased, and 130 ballots were found to come from registered felons.

The group also found no evidence of "ballot dumping" for President Joe Biden.

The group also spent months investigating accusations from MyPillow CEO-turned-election conspiracy theorist Mike Lindell, including the claim that technology made by election security company Dominion voting systems was hacked or otherwise manipulated. But, unsurprisingly to elections experts who had been sounding the alarm for months that Lindell's claims were bogus, WILL was unable to substantiate those claims.

In fact, the group even noted that Democrats underperformed expectations, on average, in areas that used the Dominion Voting machines in question.

Trump and his allies still maintain widespread election fraud contributed to his loss to President Biden — though similar audits across a number of other states have repeatedly debunked these claims. The most high profile of these came earlier this year in Arizona, where a first-time conservative election audit group called the Cyber Ninjas also failed to substantiate a number of claims about widespread election fraud in the state.

Moving forward, a major fissure in the Republican Party is forming over how much emphasis to put on false allegations of election fraud — and with Trump eyeing the 2024 nomination, it's a problem that won't be going away anytime soon.

Even after these high-profile defeats, elected officials like Rep Brian Babin of Texas have said things like: "We need to make sure that we're getting to the bottom of some very abnormal, anomalistic, strange or irregular things that happened, so that we don't have a repeat of that. We've got to have confidence in our election."

Other Republicans, like Rep. Dan Crenshaw, have said that they've grown tired of the investigations into the 2020 election. He said Trump's obsession over his loss is "absolutely unhelpful," to the GOP, adding that "When I talk to voters, I am very blunt with them. I say, 'Stop being self-defeating. Get out and vote."

"You shouldn't listen to anyone who tells you not to."

CORRECTION: A previous version of the story erroneously stated that WILL's election audit was funded by taxpayers. The Associated Press reported that a different Republican-led audit cost taxpayers more than $600,000. Salon regrets the error.