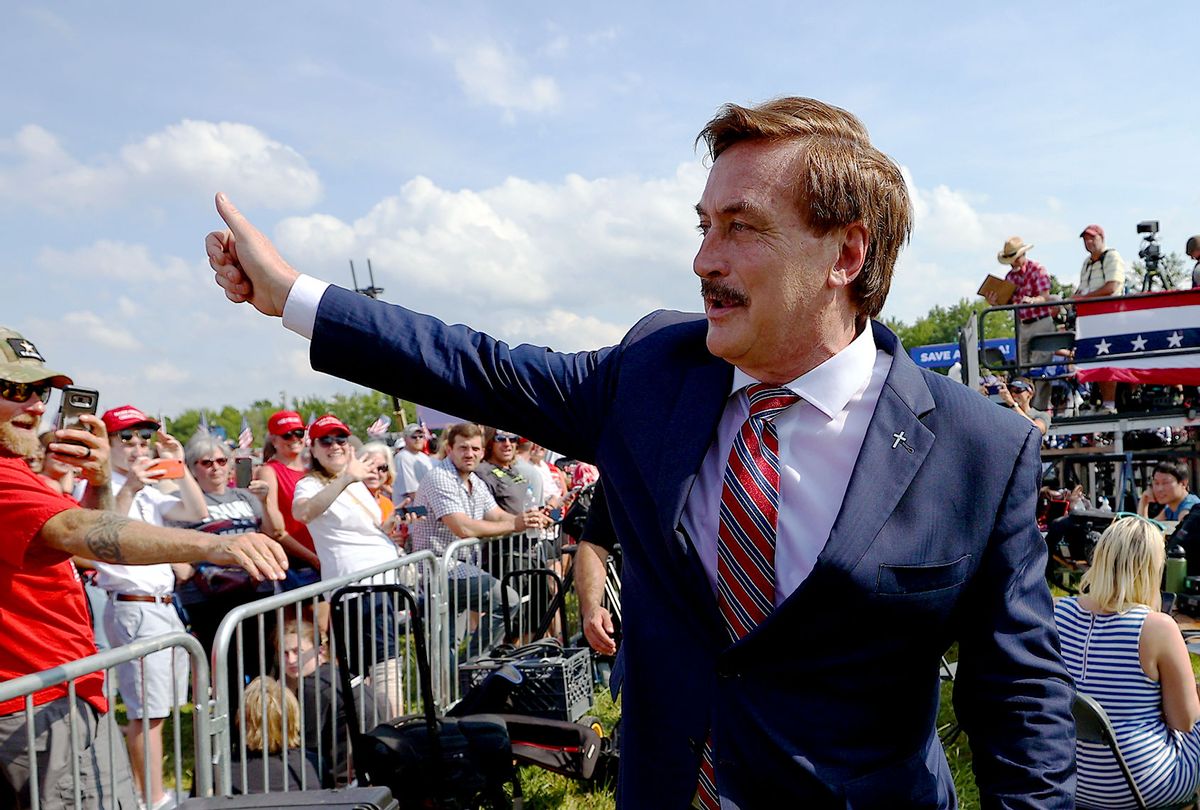 SIOUX FALLS, S.D. — Day One of Mike Lindell's conspiracy theory laced three-day cyber-symposium on alleged election fraud, held for unclear reasons in one of the most sparsely populated regions of the country, has gotten off to a rough start. First came a vague allegation that the MyPillow CEO's "television station," Lindell TV, has been hacked. Then there's the fact that Lindell has no actual evidence of voter fraud, just color-coded maps marked with seemingly random numbers.

On Tuesday morning, Lindell opened the proceedings by announcing from the stage, "We need to get the word out because they blocked the thing." Who is "they"? What exactly is "the thing"? That was not clear. "But this is part of what I'm going to talk about today," he continued. "This is the cover-up. This is the absolute cover-up of the worst in history."

The pillow king then told the eager crowd that his streaming platform had been "attacked."

"The whole technology was attacked, we expected that, but we do have a backup plan," Lindell stated, adding with no evidence that 40 million people tuned in to the activities throughout the day. (Only 960 million short of the Elvis-like global audience Lindell has hoped for.) "We're going to educate everybody," he added.

"Tonight, you're going to see something, at 7 o'clock, that's going to change the world," Lindell added, to the crowd's delight. "We have stuff that only a handful of people know about. And there's a reason for that!"

But Tuesday remained uneventful, with Lindell occasionally appearing on stage, announcing he'd cut the lunch break short and launching diatribes against members of the press while eagerly watching for published news stories about the event.

Brannon Howse, the co-host and producer at Lindell TV, who appears to have produced or directed most of Lindell's videos, was asked by Salon if he thought Day One was a "win" for Lindell. Howse paused and said, "It's a three-day event," before being whisked away.

Some conference-goers expressed disappointment and apprehension that Lindell has yet to produce hard evidence supporting his "theories," and one expert told Salon he believes Lindell could face legal consequences.

Sandy Salmon, a Republican state legislator from Iowa, told Salon he was still optimistic and said Lindell's presentation was "really clear about the results they had gotten," but cautioned that so far, the pillow king had not shown evidence "broken down by county and precinct."

Former Trump White House strategist Steve Bannon, a key weathervane on the pro-Trump right, appears skeptical about Lindell's claims, claiming he needed to see additional evidence that was not forthcoming on the first day.

While Lindell did not come close to proving a massive 2020 election conspiracy on Tuesday, he has two more days to pull out all the stops. A routine request from Salon for a sit-down interview during the symposium became the trigger for an extended monologue from the main stage, with Lindell describing this reporter's work as "hit jobs."

In a late-night Tuesday text to Salon, Lindell said, "Zach go write your garbage, and then we will interview on stage." This reporter responded on Wednesday morning, "Sounds great. Let me know when."

However, when Wednesday arrived, Lindell backtracked on his offer to invite this reporter to the main stage. "Lose my number. You are a cancer to our country," he told Salon via text message.