Will lumbering MAGAsaurs do battle? Stone throws down "gauntlet" to "sloppy Steve" in Infowars appearance 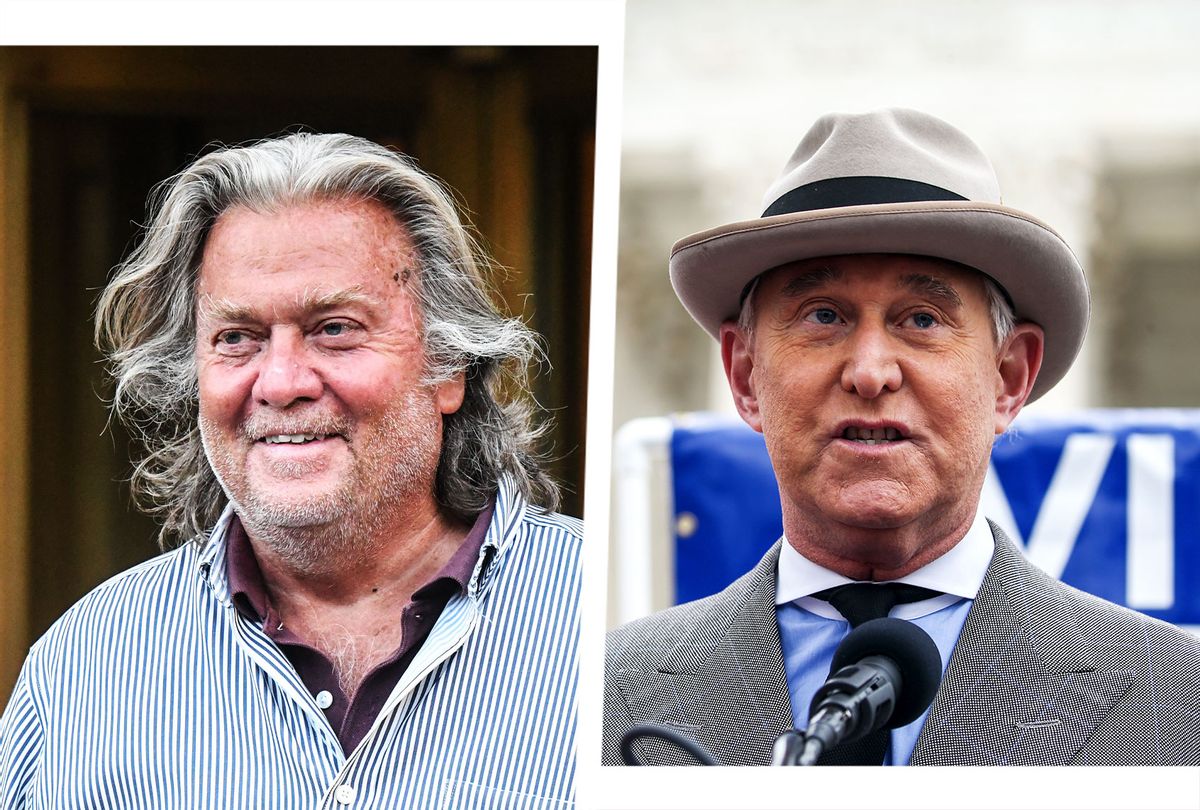 Stone's throwdown directed at Bannon came during a Tuesday appearance on the far-right Infowars program alongside conspiracy theorist and host Alex Jones.

"Let's be very clear. Not only did Steve Bannon steal the name of my Infowars show with the great American Owen Shroyer — The War Room — but he testified falsely at my trial against me. He was an informant for Robert Mueller," Stone stated. "So right now, here, today, I am challenging Steve Bannon to come on Infowars and debate this; let's have it out. Alex [Jones], you can moderate it, so it stays civil."

Stone proceeded to taunt Bannon, who has long billed himself as willing to speak to anyone on his "War Room: Pandemic" podcast.

Stone said that Bannon "needs to answer as to why he was working with Robert Muller to destroy me and send me to prison. So there it is, the gauntlet has been laid down, big Steve. Come on, sloppy Steve. We can find you a suit and tie that is clean, I think, and you should come on Infowars and answer what I just said."

The self-described "dirty trickster" then addressed Bannon's followers online who seek to troll or challenge him: "I will merely block you."

In recent weeks, Stone has taken frequent aim on the far-right social media platform Gab at both Bannon and his sidekick, former Breitbart editor Raheem Kassam. "It appears that Steve Bannon has eaten Raheem," Stone wrote on Gab this past week. 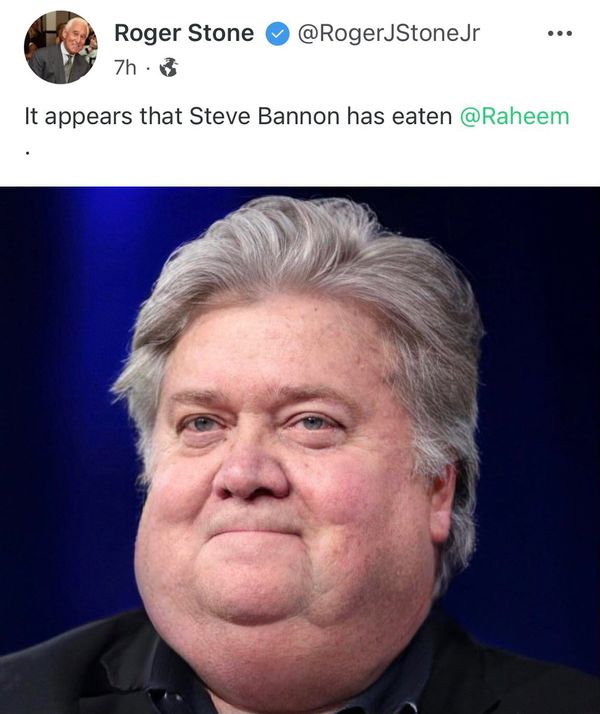 Numerous attempts to contact Bannon for comment were met with no response. Kassam responded to a separate Salon request for comment regarding Stone with a shrug emoji.

Near the end of the Infowars interview with Jones, Stone stated that Bannon should not continue to be able to put himself forward as an advocate for the 'America First' agenda."

In early May, Stone recommended punching Bannon in the face for being an "informant" to Mueller during Trump's presidency.

"Bannon was an informant for Robert Mueller and indisputably perjured himself at my trial. He also accused Donald Trump Junior of being a Russian traitor and insisted that President Donald Trump was suffering from Alzheimer's," Stone wrote. "If you see this fat disheveled load of s**t, I strongly recommend that you punch him in the mouth as hard as you possibly can. Do it for America!"

The tension between the duo appears to stem from Bannon telling a federal court in 2019 that Stone "was the link between the [Trump] campaign and WikiLeaks," according to Newsweek. "The campaign had no official access to WikiLeaks or to Julian Assange," Bannon said in court at the time. "But Roger would be considered if we needed an access point."

Stone, who has also said that this Salon reporter has a punchable face, didn't immediately return a request for comment on Thursday morning.