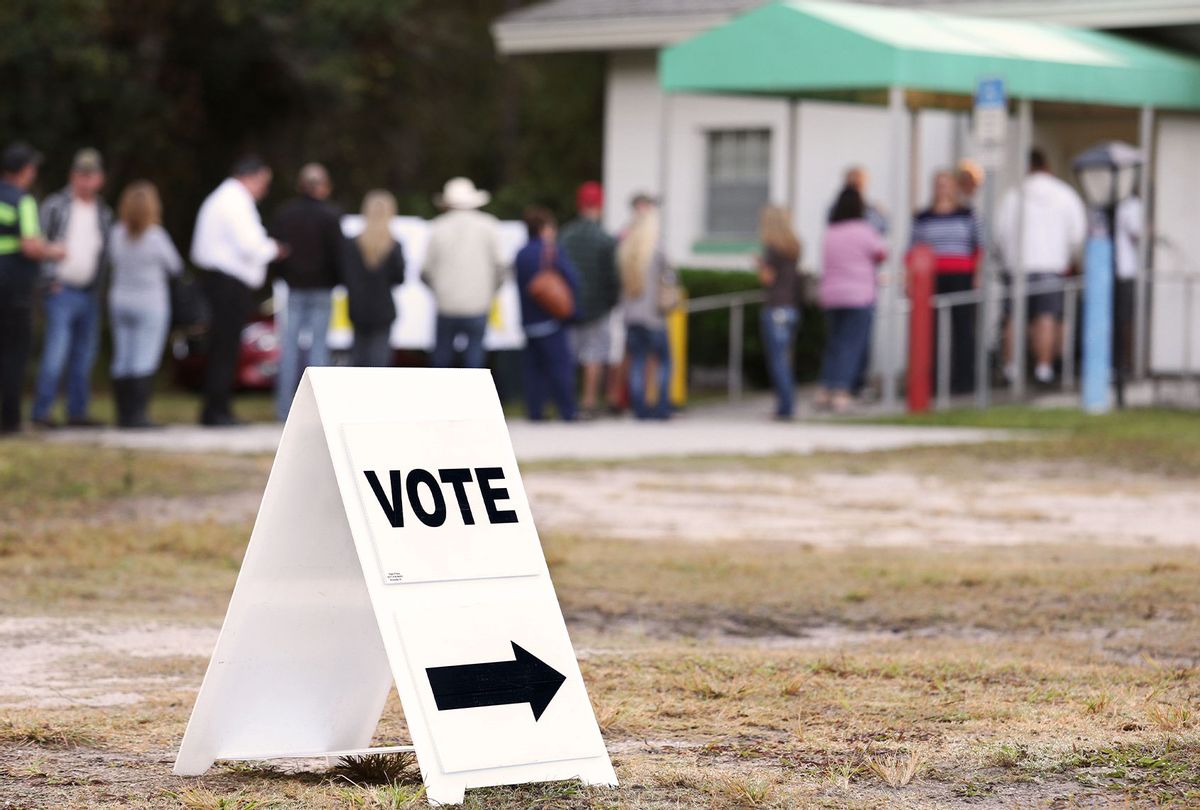 Voters wait in a queue to cast their ballots in the presidential election at a polling station in Christmas, Florida (GREGG NEWTON/AFP via Getty Images)
--

A controversial scheme by Michigan Republicans to circumvent Democratic Gov. Gretchen Whitmer's veto of their proposed voting restrictions could eliminate one in every five polling sites in the state, according to a new study.

The head of the Michigan Republican Party is funding the "Secure MI Vote" petition, which includes a ban on in-kind contributions to local election clerks. Organizers have acknowledged that this provision would in fact end the use of donated polling sites, such as churches. Some cities and townships could lose half their polling sites — or in some cases all of them — under the new restrictions, according to a new report from the liberal advocacy group Progress Michigan.

"I hope people are able to see the danger and the impact of this proposal," Mary Clark, president of the Michigan Association of Municipal Clerks and Delta Township clerk, said in a statement. "This is the type of policy that causes me to lay awake at night because it will cause so much confusion amongst voters and put clerks in impossible situations. This would absolutely negatively impact legally registered voters in my jurisdiction and every jurisdiction in this state."

Michigan Republicans, who introduced a 39-bill package to change the state's voting laws in the wake of Donald Trump's defeat, in September launched an effort to pull an end-around on Whitmer's veto of their proposed voting laws by introducing a ballot petition — one that voters will never get to see. An unusual quirk in the state's constitution allows the Republican-dominated state legislature to adopt the initiative rather than put it on the ballot if they collect just 340,047 signatures, or 8% of the number of voters who participated in the last gubernatorial election. Whitmer has no power to veto such an initiative if it is passed by the legislature.

The initiative would create the "most restrictive voter ID law in the entire country," voting rights groups say, even though the state already has a voter ID law on the books. It would also ban election officials from "sending or providing access to" an absentee ballot application unless it is requested and ban election clerks from accepting donated spaces or private donations to help administer the elections.

Local election clerks have sounded the alarm over the proposed initiative, arguing that the stricter voter ID requirement amounts to a "poll tax" and will restrict ballot access while causing confusion among voters. But the ban on donated spaces "would be devastating," Clark said in a news conference last week.

Ingham County, which includes most of Lansing, could lose a quarter of its polling locations.

"The most effective way to kill something in government is to cut off its funding," Ingham County Clerk Barb Byrum told Salon. "Republicans, through this petition, are trying to starve our clerks, who safeguard and administer our democracy, of funding in every way possible. The result will be a democratic system that is anything but."

Delta township had 16 polling locations for 26,000 voters, Clark said, 12 of which are located in religious sites. Under the proposed ban, local election clerks would have to make do with fewer polling locations or pay to use sites they otherwise would have accessed for free.

"I wake up in the middle of the night and think, 'Where am I going to put 26,000 voters?' There are townships that don't have a township hall. What are you going to do in a small community?" she said, adding, "It's alarming, it's frustrating, and it's scary. … It's starting to create panic about how we are going to manage this."

Jamie Roe, a spokesman for the Secure MI Vote ballot committee, did not respond to questions from Salon but defended the provision in a statement to the Associated Press.

"We do not believe that it is improper for churches to serve as polling places," he said. "It's wholly appropriate. The fact of the matter is, though, churches are providing a benefit to the public and they should be compensated for that benefit."

The initiative does not include any funds for local election clerks to cover the cost of the new polling sites, meaning that cash-strapped election officials may be forced to reduce the number of polling locations. This could lead to longer lines and longer journeys for voters to get to the polls, the report said. But state law also requires election clerks to provide a minimum number of polling places depending on the population, meaning that local election officials will have to find ways to stretch budgets to pay for locations they would have had access to for free.

"Banning donated spaces while not also increasing budgets for local clerks will mean that precincts have to move to cheap, inaccessible spaces, be consolidated, or be paid for at the expense of other necessary fiscal expenditures for the smooth operations of the municipal clerks' offices," Bynum explained. "So it will be difficult for voters to use, will be consolidated so that lines are long and force voters to wait for hours to cast a ballot, or will disrupt the local clerks in carrying out their duties in other, unforeseen ways."

Changing polling locations voters have used for years could also spark confusion. When voters who have been voting at the same location for years "show up to vote and are turned away, they are being disenfranchised," Byrum said.

While the new report focuses only on houses of worship, the language in the petition would also ban clerks from using schools and senior centers as polling sites.

These locations "all give this space as their contribution to our democracy and their community," Clark said. "It's quite unsettling."

The religious sites listed in the report as "just the tip of the iceberg," said Sam Inglot, deputy director of Progress Michigan.

"This proposal will negatively impact voters and clerks across Michigan," he said. "This initiative will change where voters have voted in previous elections, in some cases for decades, and could reduce the overall number of polling places available to voters. This systematic defunding of our elections will result in longer lines, longer drives and less people able to make their voices heard."

A survey of members of the Michigan Association of Municipal Clerks found that 82% of respondents oppose at least some components of the petition, Clark said, leading the group to oppose the initiative.

"It's not a Dem issue, it's not a Republican issue, it's a voter issue," she said, adding that no one from the state legislature reached out to the group for input on the provision.

The proposal in the Secure MI Vote petition are similar to the voting restrictions introduced by Republicans in the state legislature amid a slew of Republican legislation restricting ballot access nationwide amid baseless allegations of voter fraud from President Donald Trump and his allies. But the ban on private donations appears aimed at Republican suspicions over "Zuck bucks," or private grants from a nonprofit that received funding from Facebook founder Mark Zuckerberg and his wife Priscilla Chan.

The couple gave $400 million to the Center for Technology and Civic Life, a nonprofit that donated funding to local election officials to help administrators conduct elections amid the pandemic. The funds, including nearly $8 million that it donated to cash-strapped election officials in Michigan, were meant for renting polling places, recruiting poll workers, equipment and PPE, according to the organization.

Though the organization said it donated funds to urban, suburban and rural areas, Republican lawmakers have raised suspicions over "what strings are attached" to the grants and whether third-party group donations may favor liberal areas. Some Trump allies have used the donations to claim that tech "oligarchs" are "buying the administration of the state's elections."

Byrum rejected the Republican argument, questioning whether lawmakers also want to ban sheriffs from using grant money because it is "tantamount to buying off law enforcement."

"Is Mark Zuckerberg calling up 1,600 local clerks in Michigan? We have dozens of safeguards that prevent malfeasance at every level," she said. "We can review paper ballots if needed, the results are tabulated, canvassed, audited, audited a second time and can be recounted if the candidate believes there is some kind of error."

Beyond the impact of the ban on donated spaces, prohibiting cash-strapped election clerks from accepting outside funding could make it more difficult to administer elections.

"No other constitutional office holders are restricted from accepting grants and donations to supplement the meager funding that we get to do the jobs that the constitution requires of us," Byrum said. "Clerks use these grants to buy ballot drop boxes, tabulators, envelope openers and office supplies."

Republicans in Michigan and around the country have framed their onslaught of new voting restrictions as necessary to preserve "election integrity" amid Trump's years-long fear-mongering over baseless allegations of voter fraud and unfounded concerns about mail voting. But Republicans in Michigan and other states have failed to find any evidence of voter fraud, and some have even admitted that restrictions are necessary for their party to counter the increase in voter turnout boosted by the expansion of mail voting during the pandemic.

"Let me be absolutely clear about what the intent is of this petition as well as other efforts by Republican lawmakers in Michigan and across the country: The intent is to ensure that fewer people vote," Byrum said. "In Michigan, the Senate Republican leader stated that more voters did not 'accrue to his interest' during the 2020 election. But this is not just true for 2020. Republicans have tried to suppress the vote for decades because when more people vote, they lose."