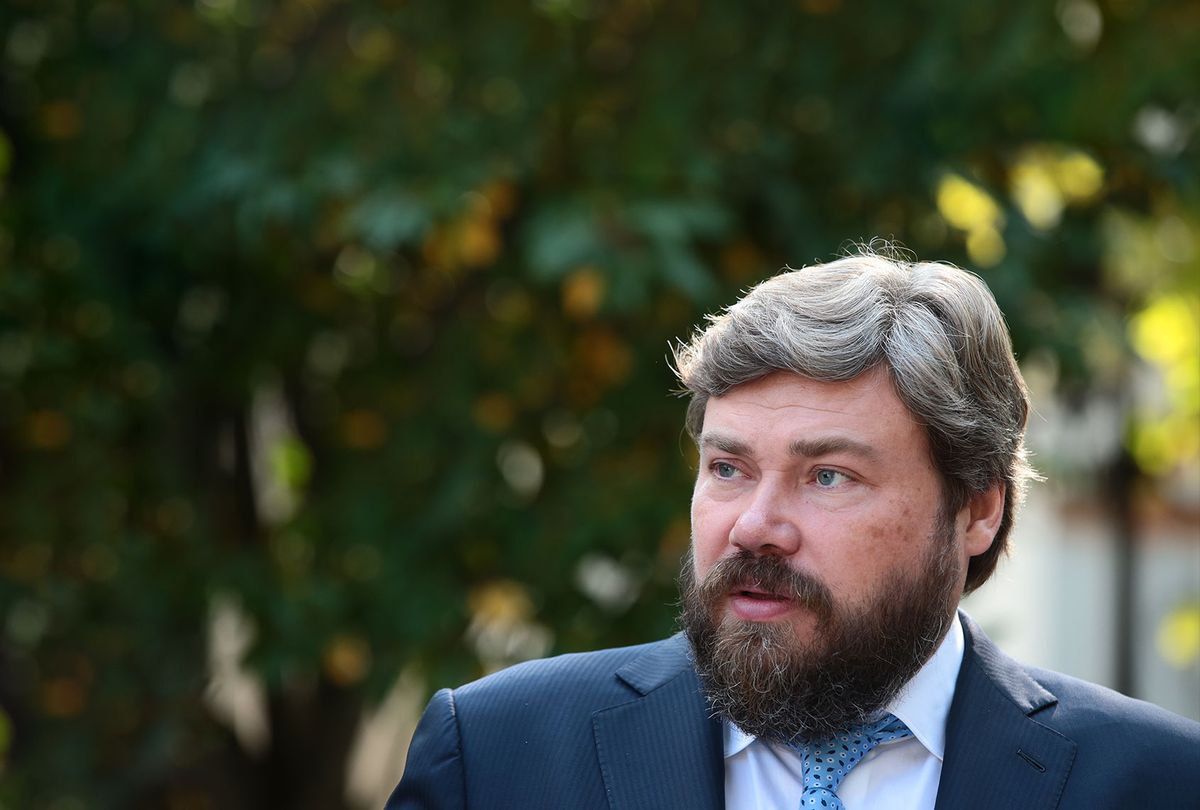 The chairman of the Double-Headed Eagle Society for Russian historical education, St Basil the Great Foundation founder Konstantin Malofeyev attends an international academic conference titled "Crimea in the Life of the Romanov Dynasty. The Beginning and the End of the Reign of Emperor Nicholas II of Russia" held at the Livadia Palace. (Sergei Malgavko\TASS via Getty Images)
--

A former Fox News director who helped a Russian oligarch launch a propaganda network was arrested last month in London on charges that he helped the oligarch dodge sanctions, according to newly unsealed court documents.

John Hanick, who worked at Fox News for 15 years, beginning when the network first launched in 1996, was charged with violating sanctions and lying to the FBI in U.S. District Court in Manhattan.

Hanick, who left Fox in 2011, spent four years working for sanctioned Russian oligarch Konstantin Malofeyev, who is "closely tied to Russian aggression in Ukraine," the Justice Department said in a news release.

The DOJ said that Hanick's work for the oligarch had violated sanctions imposed by the Treasury Department in 2014 in response to Russia's annexation of Ukraine's Crimea territory. The Treasury at the time called Malofeyev "one of the main sources of financing for Russians promoting separatism in Crimea."

"Hanick knowingly chose to help Malofeyev spread his destabilizing messages by establishing, or attempting to establish, TV networks in Russia, Bulgaria and Greece, in violation of those sanctions," Assistant Attorney General Matthew Olsen, who oversees the National Security Division, said in a statement.

Though the charges stem from past sanctions and not the latest slew of economic sanctions imposed on Russian oligarchs in response to the invasion of Ukraine, U.S. Attorney Damian Williams stressed that Hanick's indictment shows the department's commitment to the "enforcement of laws intended to hamstring those who would use their wealth to undermine fundamental democratic processes. This office will continue to be a leader in the Justice Department's work to hold accountable actors who would support flagrant and unjustified acts of war."

Malofeyev, a banker, is a prominent right-wing figure in Russia with ties to far-right politicians in the U.S. and Europe, according to the New York Times. Malofeyev hired Hanick in 2013 to build a Russian cable news network, according to the DOJ. The network was called Tsargrad TV and was intended to be a Russian version of Fox News, according to the indictment.

"In many ways, Tsargrad is similar to what Fox News has done. We started from the idea that there are many people who adhere to traditional values and they absolutely need a voice," Malofeyev told the Financial Times in 2015.

Hanick later moved to Greece to launch a TV network that would provide an "opportunity to detail Russia's point of view on Greek TV," Hanick wrote to Malofeyev, according to the court documents. He also traveled to Bulgaria to purchase a TV network on behalf of the oligarch, the DOJ alleged.

In an interview with FBI agents in February 2021, Hanick admitted that he knew that his boss was under sanctions, but falsely claimed he did not know about Malofeyev's connection to the Bulgarian network, according to the indictment.

The DOJ alleged that Hanick "reportedly directly back to Malofeyev" about his efforts in Greece and Bulgaria but "took steps to conceal Malofeyev's role in the acquisition by arranging to travel to Bulgaria with another person identified by a Greek associate of Malofeyev, so that it would appear the buyer was a Greek national rather than Malofeyev."

Prosecutors learned about Hanick's activities from an unpublished memoir that was "discovered by investigators through a judiciously authorized search of Hanick's email account," according to the indictment.

Hanick was arrested in London last month and is awaiting extradition. He faces up to 25 years in prison in convicted on both charges.

The indictment described Hanick as a former Fox News producer, although a Fox News spokesperson describes him as a "weekend daytime director."

Hanick and Malofeyev appear to have connected over religion. The Times reported that Malofeyev is a "devoted follower" of the Russian Orthodox faith and Hanick and his family joined the Russian Orthodox church after moving to Moscow. Hanick complained in a 2013 interview flagged by Right Wing Watch that in the U.S., "serious problems, including the decline of morals ... brought the separation of church and state" and praised Russia for its state embrace of religion.

Malofeyev, who sought to launch a Russian Orthodox-based news network, is also a proponent of bringing back Russia's monarchy.

"The quasi-monarchy that we basically now have is a very good thing," he told the Times in 2020, after Russian President Vladimir Putin was re-elected. "If we were now to start calling him emperor, not president, then we wouldn't have to change much in the Constitution."

The indictment was unsealed after the Justice Department launched Task Force KleptoCapture as part of the Biden administration's sanctions on Russia over its brutal invasion of Ukraine. Attorney General Merrick Garland said last Wednesday that the task force will "use all of its authorities to seize the assets of individuals and entities" who violate sanctions against Russia.

President Joe Biden, during his State of the Union address last week, said that his administration would move to seize assets from sanctioned Russian oligarchs.

"We are joining with our European allies to find and seize your yachts your luxury apartments your private jets," he said. "We are coming for your ill-begotten gains."