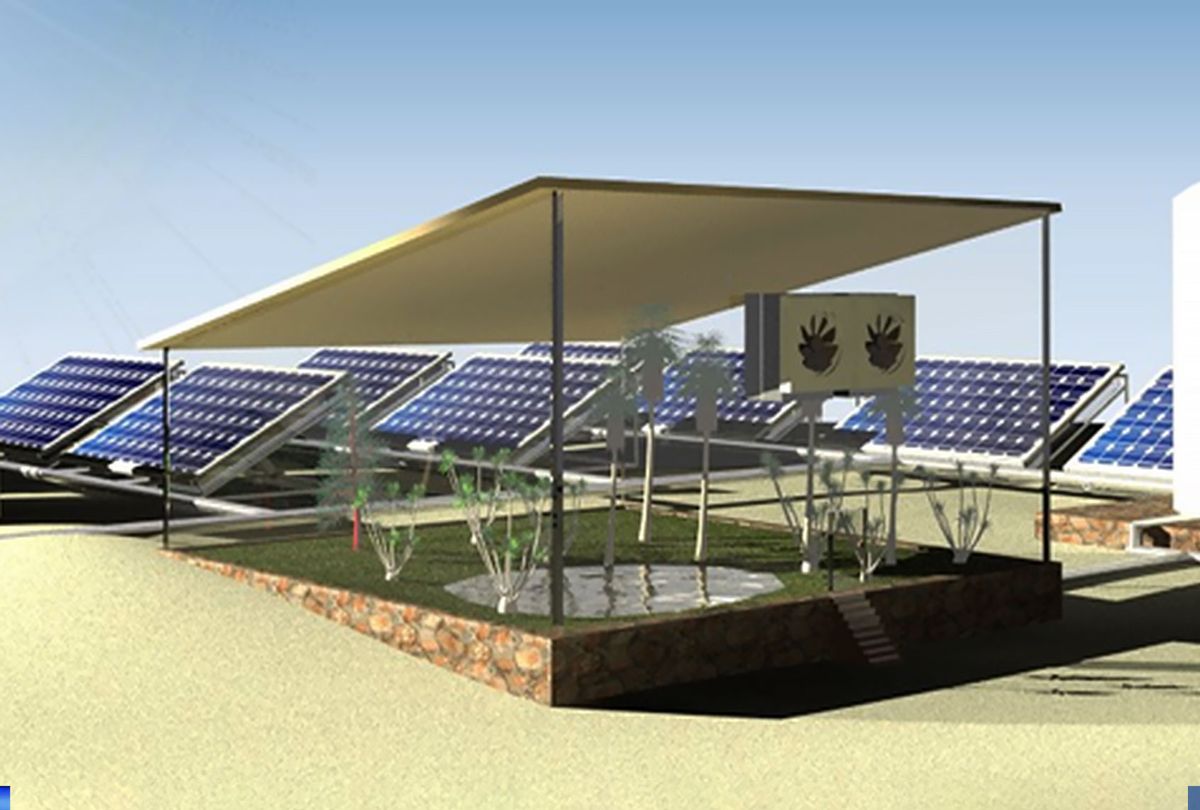 Climate change has all kinds of ancillary effects beyond mere rising temperatures: from its effect on agriculture, water resources, cooling and wildlife ranges, when we talk about stopping climate change we are talking about a huge, multifaceted project. In other words, supplying reliable sources of water, energy, and food in a rapidly changing world simply requires outside of the box thinking.

Hence, scientists at King Abdullah University of Science and Technology have built an "integrated solar-driven system" that does just that — offering a low-cost source of renewable energy, water, and food providing life saving benefits for those people living in remote, arid regions of the world. It's a remarkable all-in-one system that solves multiple problems — water supplies, electricity, and food — in effect killing three birds with one stone

This specific system is called a "water-electricity-crop coproduction system" or "WEC2P." Using a unique hydrogel to capture waste heat and condense water vapor to irrigate crops, researchers increased electricity generation of the solar panels by 10% — a massive leap considering most solar panels are only able to convert about 20% of the solar energy they are exposed to into electricity. Combining irrigation, agriculture, and photovoltaics the conceptual design makes promising headway for a type of integrative solar energy known as agrophotovoltaics.

In the arid climate of Saudi Arabia, the research team tested a proof-of-concept model with spinach plants for two weeks this past summer. Even in exceptionally hot weather, the experiment yielded a 95% success rate with 57 of the 60 seeds sprouting and growing to a normal height using only the 2 liters of water the system itself condensed.

"Our goal is to create an integrated system of clean energy, water, and food production, especially the water-creation part in our design, which sets us apart from current agrophotovoltaics," Dr. Peng Wang, a researcher on the project, explained in a statement.

With the proof of concept demonstrating very promising results, before turning the model into a product the team will work on developing a more absorbent hydrogel that can generate even higher quantities of water.

"Making sure everyone on Earth has access to clean water and affordable clean energy is part of the Sustainable Development Goals set by the United Nations," Wang continued. "I hope our design can be a decentralized power and water system to light homes and water crops."

Photovoltaics are widely a key tool in any strategy to avert a total climate crisis. Still, like any developing technology, photovoltaics come with their own set of problems. Notoriously inefficient in hot climates, photovoltaics are severely limited in the desert, one of the few environments with nearly constant daytime solar exposure and effectively limitless potential for clean energy.

Meanwhile, climate change is driving water shortages and desertification, a process in which previously hospitable environments become veritable wastelands of desert ecosystems. According to the World Health Organization, over 2 million people live without safe drinking water, 800 million people lack access to any electricity, and 700 million people suffer from starvation.

"A fraction of the world's population still doesn't have access to clean water or green power, and many of them live in rural areas with arid or semi-arid climate," Wang said. "Our design makes water out of air using clean energy that would've been wasted and is suitable for decentralized, small-scale farms in remote places like deserts and oceanic islands."

Read more on the climate crisis: