Modern environmental messaging stresses changes in individual behavior. But most CO2 emissions come from the rich 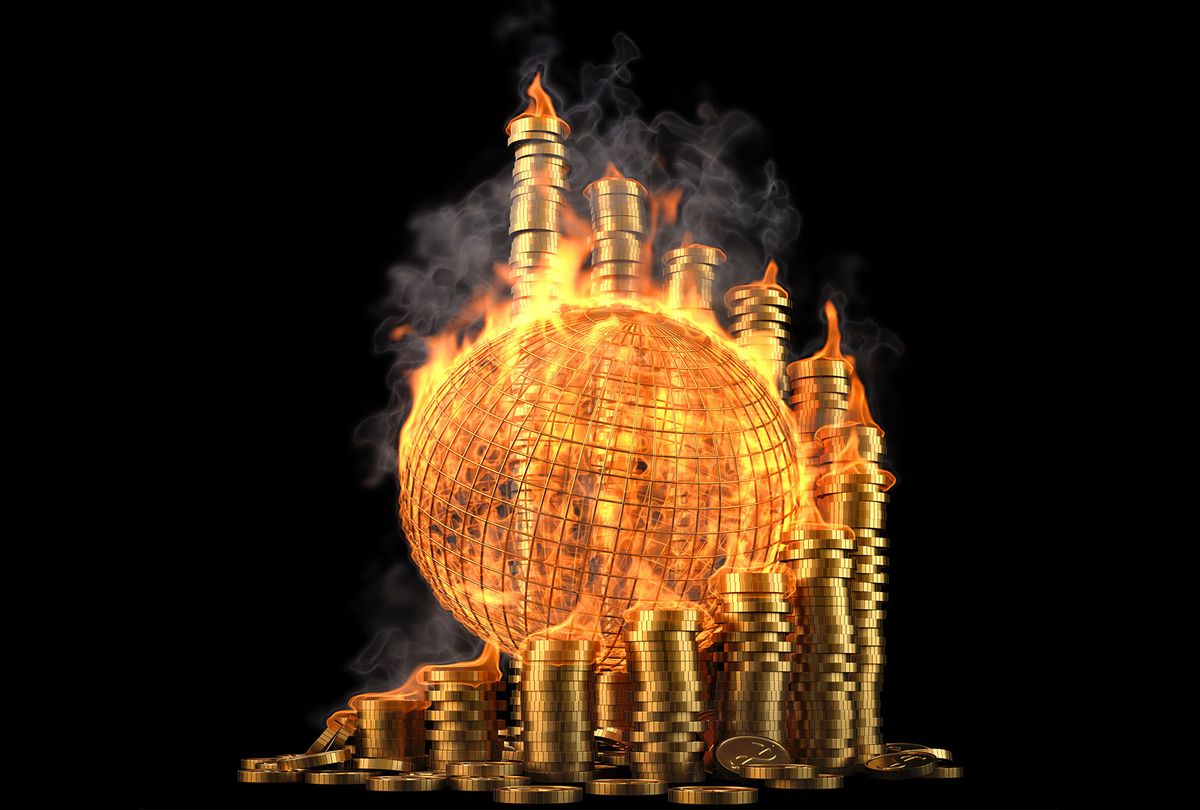 Africa has 54 countries, more than one-quarter of the 195 nations on the planet today. The continent is also home to roughly 1.3 billion souls, more than one-sixth of the human population. And despite comprising a large chunk of the community of Homo sapiens, however, Africa is responsible for less than four percent of the world's greenhouse gas emissions.

Life being unfair, that isn't going to spare Africans from suffering as a result of man-made global warming. A recent study revealed that Mount Kilimanjaro in Tanzania, the Rwenzori Mountains in Uganda and the Mount Kenya massif in Kenya are going to lose their glaciers — the only ones on the entire continent. Losing these iconic natural landmarks isn't the worst thing that will happen to Africa because of climate change — there will be extreme weather events, rising sea levels, economic devastation and more — but there is a melancholy symbolism to their impending disappearance.

Climate change isn't a problem caused by all people equally; it is caused mostly by the rich, and since we live in a capitalist world, the suffering will fall disproportionately on the poor. Climate scientists, sociologists and economists are largely in agreement on this point. And it presages the way that things will need to change in order to stave off the extinction of humanity.

"The problem is structural and systemic," Dr. David Fasenfest, an American sociologist and associate professor at Wayne State University, told Salon by email. "Capitalist society is geared towards waste and destruction in order to promote consumption while producing at the lowest cost. That requires power and that means without strict restrictions most of the time we use 'dirty' forms of energy like coal that pollutes and promotes climate change."

In this sense, there is no individual or group of individuals who can be accurately described as the single "culprit" behind climate change. Everyone is acting according to their self-interest within the system of incentives established by our neoliberal economic system. Cumulatively, these led to social developments that exacerbate climate change. For example, if a business uses a more expensive form of energy rather than a green one, their production costs will rise and consumers will probably respond to the likely price increase by rewarding their competitors.

"We are all both culpable and not," Fasenfest observed. People who can afford and use air conditioning during hot weather, or continue to eat beef even though it exacerbates climate change, all contribute to a system that is destroying the planet. As Fasenfest observed, most people have no practical alternatives to participating in this system on a day-to-day basis; they can make lifestyle alterations which make teensy dents in the greater problem, but that is about it. If you are fortunate enough to live in a society that prospers under capitalism (relatively speaking), the chances are that you fall into the category of major climate perpetrator in one way or another.

One cannot discuss this problem without also mentioning industrialization. An advanced energy technology expert, Dr. Martin Hoffert of New York University, broke down the history by email for Salon.

"The agriculture-based civilization of the eighteenth-century using water and animal power to augment human muscle emitted few greenhouse gases," Hoffert explained. Once humanity became reliant on technologies that burn fossil fuel, they kicked off "an unprecedented transfer of carbon from the lithosphere (rocks) to the atmosphere was taking place with no precedents geologically."

"It took two hundred million years for the hydrocarbon energy reserves (coal, oil, and gas) to form, whereas at the current mining and oil pumping rates fueling civilization and supporting global GDP growth, we will have depleted them in a few hundred years," Hoffert added. "We're using fossil fuels a million times faster than nature made them."

In a sense, then, global warming is the story of how industrialized nations put humanity on a collision course with disaster in a capitalist system. It is a global problem, albeit one that wealthier nations have exacerbated the most. To quote Howard Beale from "Network": "We're just the most advanced country, so we're getting there first."

This is reflected in the nation-by-nation statistics that serve as the backdrop for the melting of the African glaciers.

"Most of the world's total greenhouse emissions have come from the world's rich countries—basically the members of the OECD [Organisation for Economic Co-operation and Development]," Dr. Naomi Oreskes, an American historian of science at Harvard University, wrote to Salon. "Climate change is driven by greenhouse gases, which are produced by economic activity, so the countries with the most economic activity are most responsible for climate change." For most of modern history this included the United States, Japan and industrialized European countries like France, Germany and the United Kingdom. Now that China is experiencing an economic boom, it has become the world's top annual emitter. Moreover, Oreskes noted that national annual emission statistics are somewhat misleading "since the climate doesn't care when the emissions were emitted."

If you look at per capita carbon footprints by country — that is, ascertaining how much carbon is emitted by the average individual in a given nation — the list is consistently topped by the affluent states.

"We are talking about people in nations that are either very rich, very inefficient, or both," Oreskes explained. In 2011, for instance, the top nations in terms of per capita emissions were Luxembourg, the United Kingdom, the United States, Belgium and the Czech Republic. In lectures to students, Oreskes explains that the average American has the same carbon footprint as 1.3 Koreans, 7 Brazilians, 9 Pakistanis, 35 Nigerians and 52 Ugandans. Even so, those national statistics are also misleading in the sense that they can dupe someone into believing the problem is about border rather than money.

"This reflects consumption, which reflects wealth," Oreskes told Salon. "A rich person in India might have a carbon footprint similar to an average American. So basically, the answer is rich people."

If you're reading this and are among the global affluent, you should pause before starting to feel too guilty. As mentioned earlier, few outside the tiniest sliver of the billionaire class has the power to single-handedly make massive changes to the socioeconomic order. Even if you live a middle class lifestyle in an industrialized nation, that does not mean you chose the economic infrastructure you inhabit. There is a reason why our economy has not adapted to mitigate climate change, even though the world's nations acknowledged they had to do so by signing the United Nations Framework Convention on Climate Change in 1992. It isn't everyone's fault: It's the lobbyists from industries that, in one way or another, depend on climate change to make their profits.

Dr. Riley Dunlap, a sociologist at Oklahoma State University who specializes in environmental sociology, described how the fossil fuel industry — including oil, coal and natural gas corporations — have undermined the planet's future.

"They sign pledges and advertise their commitment to reducing carbon emissions, but continually oppose (via PR campaigns, lobbying, and campaign contributions) efforts to achieve reductions — such as their current attempts to undermine [President Joe] Biden's climate agenda," Dunlap wrote to Salon. He identified a number of major actors in this campaign, from the U.S. Chamber of Commerce and the National Manufacturers Association to industry groups like the American Petroleum Institute and the National Coal Association.

"All of these actors rely heavily on PR firms to design and deliver their messages to the public," Dunlap explained. "Opposition to climate change mitigation policies from these economically motivated actors was strengthened considerably in the 1990s when key segments of the U.S. conservative movement—conservative philanthropists such as the Koch Brothers and their foundations, the conservative think tanks they support, and conservative media and commentators—committed to a 'free-market' ideology began promoting denial and skepticism among the public, policy-makers and mainstream media out of fear of the regulatory implications of reducing carbon emissions."

In addition to casting doubt on the indisputable science proving the planet is warming, conservative groups also try to convince people that individual behaviors are more important than the consequences of their industries. Since Earth Day 1970, Dunlap pointed out, industries have tried to manipulate the public dialogue so that individual consumers believe their choices can save or destroy the planet, such as stopping littering and helping clean up green spaces. This obscures the systemic issues that are actually causing this problem, guaranteeing that they'll only get worse.

So what is the solution? Simply put: Acknowledge that capitalism is the problem, and tailor one's political solutions accordingly.

"The only way forward is political — challenging the very forces and structures that permit this degradation," Fasenfest told Salon. He noted how people continue to bitcoin mine even though it uses more energy than many small cities, or how corporate interest groups and economic fears overrode self-preservation after humanity began to make strides for the environment in the 1960s and 1970s.

"Today we debate social spending and the senator from a coal producing state [Joe Manchin of West Virginia] insists that alternative energy supports be dropped from those plans," Fasenfest wrote. "Consider that the gap between the 1% and 99% is smaller than the gap between the 0.1% and the 1%, and consider that those people are both insulated and indifferent to a whole range of problems, and you get the reason there has to be a mass intervention that aggressively forces changes."

In addition, people need to become more aware of the exact nature of the political forces that threaten humanity's future. While the elites are responsible for manipulating the masses, that doesn't mean there aren't millions and millions of ordinary people who are complicit through their political choices.

"A big issue is the GOP's tribal nonacceptance of inconvenient scientific truths, as Al Gore first observed," Hoffert wrote to Salon. "The Trump-led Republican Party is in full opposition to science: Whether it's anti-covid vaccinations, universal health care, unequal application of laws by police, Democrat-leaning Black vote suppression, or denying fossil fueled climate change -- in many cases opposing their own economic interests. This looks increasingly unlike loyal opposition and more like visceral hatred of "coastal elites." prioritizing "Owning the Libs,' over other policy alternatives."

He added, "Perhaps because they perceive themselves as dismissed by better educated 'progressive elites' as bunch of ignorant hillbillies. Humiliation is an unappreciated factor in politics. They may not easily give up their gasoline powered pickups with gun racks and Confederate Battle Flags to environmentally friendly cars and trucks."