Is the real monster in “Pieces of Her” the mother-artist?

The witness protection program is probably the best metaphor for motherhood 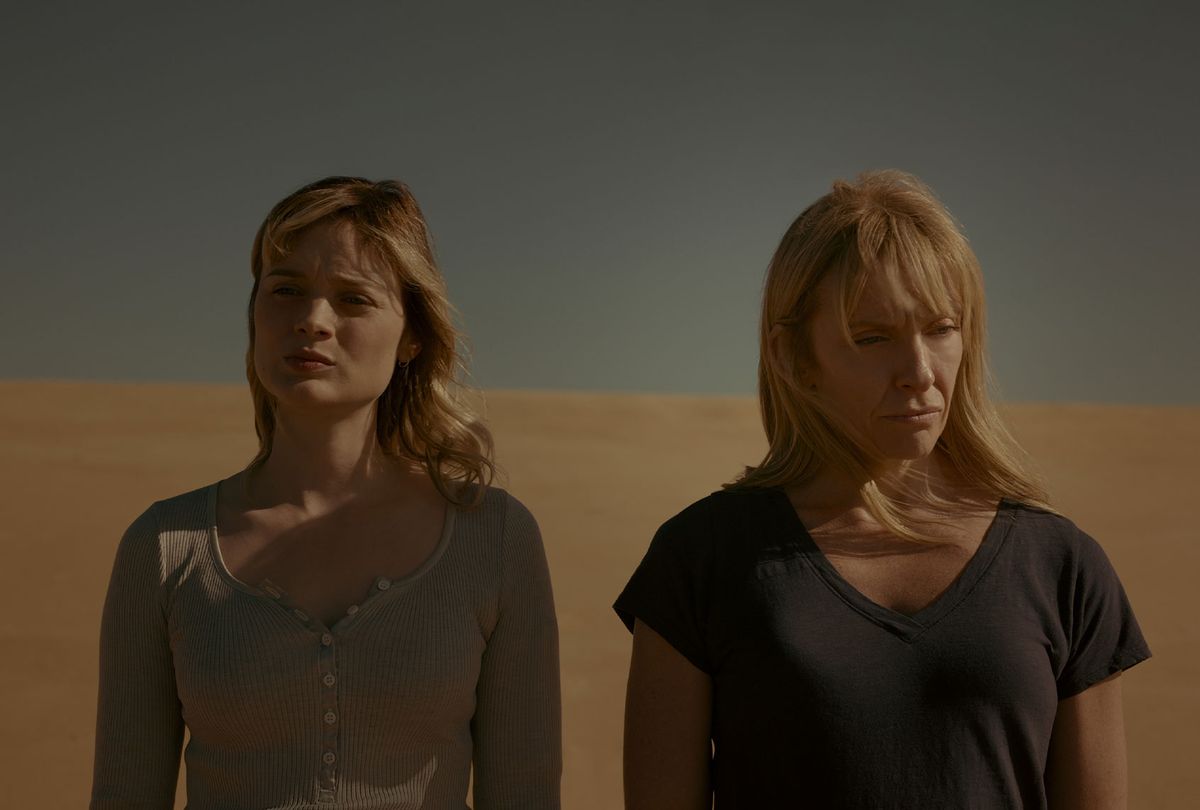 Bella Heathcote as Andy Oliver, Toni Collette as Laura Oliver in "Pieces of Her" (Netflix)
--

When confronted by a man murdering women in a restaurant, the protagonist of "Pieces of Her" does something unexpected. Stabbed by the killer as she tries to intervene, to protect her grown daughter, Andy (Bella Heathcote), the woman, Laura (Toni Collette), does not freeze. Nor does she flee when faced with danger. Or break down in fear as she's horribly injured by the killer. In a move that goes viral, thanks to a recording phone, Laura turns her hand around, knife still poking out of it, and slices the killer's neck, ending his rampage.

With a move like that, you're apt to make the nightly news. Laura's heroic action seems destined to disrupt her life, perhaps bringing unwanted attention, or drawing her old life back in, as happens to the character of Tom Stall in David Cronenberg's stunner "A History of Violence."

And with knife skills such as those, one would imagine Laura to have been a killer in her past, a criminal, maybe an assassin? But in the new Netflix show, Laura is something more dangerous. Laura is an artist.

"Pieces of Her" is based on a 2018 crime novel by Karin Slaughter. Despite the dramatic start, the show flounders for a few episodes, presenting a lot of information that when strung together may not be enough to hold a story—or viewers' attention. It's around the fourth episode when things start getting clearer and more compelling. If you haven't watched until then, hang in there (and perhaps watch and come back, as this piece contains spoilers).

But well before the fog of the story clears, Laura is nervous after the attack and the media attention it brings. She sends her daughter away. The experience of the violence has rattled her even more than it should.

When Laura's cryptic instructions send Andy on the road for a long, boring time, finally leading her to a storage shed where Andy finds a car — which contains an old suitcase with fake IDs, a photo of her mom as a young woman with bloody wounds, and a lot of money — she has even more questions. Her mother had a past. A violent one, the evidence suggests. And one she was anticipating would come back.

In 2018, novelist Edan Lepucki started a popular Instagram feed called "Mothers Before," which turned into the book "Mothers Before: Stories and Portraits of our Mothers as We Never Saw Them." Women sent in vintage pictures of their moms before they were moms, when they had big hair, bell bottoms or bikinis; when they sang in bands, studied shorthand, went to Pink Floyd concerts, played softball. As Lepucki said in an interview with the Today show, the vintage photos remind daughters, "you're not the only thing on this timeline."

In my favorite photos of my mother before me, she has long black hair down to her waist, dark tan legs in shorts. She cut off her hair right before I was born, never to grow it long again.

Andy's mother, Laura, is more unknowable than most. Because Laura, it turns out, is in the witness protection program, hiding from a man in her past who may be a monster. Andy has been under protection too, nearly her whole life without realizing it. One of Andy's first shocking discoveries about her mother's actual life? Laura was an artist.

Unlike Laura's brothers — whom we meet in flashbacks of "Pieces of Her" that feel more vivid than the contemporary scenes — we don't hear about Laura in school. We don't see her having friends or any life at all as a young woman. We only see her playing, gorgeously and intensely. All she has is music.

And giving that up — when she agrees to go into protection, she's told she can never even touch a piano again, because her talent would identify her — is a huge loss, worse than giving up her family (who, in this case, seem terrible) and giving up her wealth, which she doesn't seem to care for.

Motherhood is always a loss of self, and the tension between being an artist while being a mother is much more taut (and fraught) than being an artist while being a father. As Rufi Thorpe says in her stunning essay "Mother, Writer, Monster, Maid": "The conflict is between the selfishness of the artist and the selflessness of a mother," an absolute devotion and sacrifice to childrearing that men still are not expected to make. For evidence: see the pandemic. How many mothers have left work or been forced to leave because men's work is seen as more important and women as the default caregivers? How many books will never be written because of this? How many songs?

The witness protection program is probably the best metaphor for motherhood I never thought of before. You have to take a new name (around 70% of women in the US still do after marriage). You have to give up your job and career path. You lose your friends. You must hide yourself away. "When my mother gave birth to me, she told me she felt lost to the stars," Olivia Clare Friedman writes in her just-released debut novel "Here Lies." You might as well be in space.

And Laura is doubly adrift: Forced to start over with no way back, not even time. For the present-day scenes, her daughter is very much an adult but has still not lost the selfishness of children who refuse to see their female parent as a whole person. "It is my job to be invisible," Thorpe writes of parenting young children, describing them as "a hinge that only bends one way."

But because even adult Andy has no idea of her mother's musical past, she lashes out when Laura tries to warn her realistically about going to art school: "It is harder than you think … Having talent is only part of it. Being an artist takes drive. And focus."

"What the f*** would you know about being an artist?" Andy interrupts her. "When have you ever, ever tried to actually express yourself?"

Laura doesn't break the character established for her by the program and doesn't tell her. Protecting her daughter takes precedence above all else, even being herself. "I locked that old self away. I told myself it was my choice," Laura says later.

But the choice wasn't really a choice at all, and the consequence is the dissolving of her happiness, which echoes through Andy's life too. You can't be a mother if you feel you are not even a person anymore.

The message mothers still get is that you can't be more than one thing. Motherhood is too encompassing. It demands too much, with not enough — or any — help. And you certainly can't also be an artist, to feed that other demanding, all-consuming creature which robs your life of time and attention.

My work got better when my son went to kindergarten, when I was finally able to publish my first novel, when I finally had time. If I had not become a mother, I likely would have published one much sooner. But I don't think the story would have been as true.

Motherhood doesn't dull the artistic drive or any drive. It sharpens it, like a knife—and the scene near the end of "Pieces of Her" when Laura finally finds her way back to a piano, her aged and wounded hands shaking on the keys but finding the right notes, finding her home, is the most moving part of the whole series.

"Pieces of Her" is a show in pieces. But once the mystery finally reveals itself, the story gets really interesting. Perhaps motherhood works the same way. It's one potential aspect of being a person—and what does art do, if not reflect and challenge what we know of being alive?