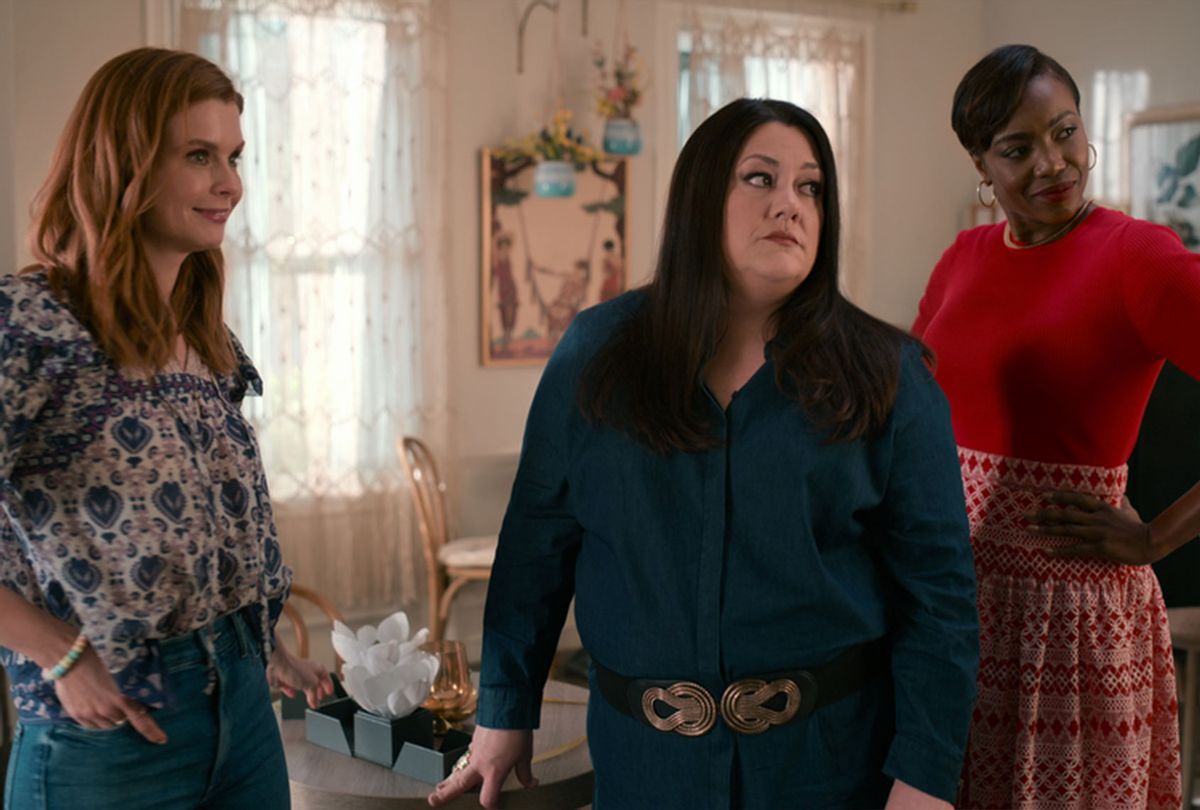 In the first scene of "Sweet Magnolias," Maddie Townsend (JoAnna Garcia Swisher) storms out of divorce proceedings when her wealthy, soon to be ex suggests selling off their family home. Maddie has three kids who live in that home, and her struggles to adjust to life as a single mother – after her doctor husband cheats, fathering a baby with an employee – occupies much of the first season of the Netflix show. "There is nothing to celebrate," Maddie says grimly when she and her lawyer and best friend Helen (Heather Headley) head to the restaurant run by the third best friend in the group, chef Dana Sue (Brooke Elliott).

This is a relatable portrayal of divorce and child custody proceedings, also known as one of the worst times in my life and the lives of many other single mothers I know. These experiences are a huge part of the show. It's not just Maddie, but both Maddie's friends — the magnolias themselves — who are or are in the process of becoming single moms in "Sweet Magnolias."

We've come a long way (baby) since Candice Bergen's "Murphy Brown" became a single mother and was singled out by then Vice President Dan Quayle — who had not seen the show at the time — for "mocking the importance of fathers."

But while shows like "Sweet Magnolias," now in its second season on Netflix, reflect the prevalence of single mother headed-households — nearly every main female character in the show is a single mom — characterizations of single motherhood that are both realistic, relatable and unharmful still remain as elusive as a state championship for Serenity's high school boys' baseball team.

Related: Bless their hearts: The women of Netflix's "Sweet Magnolias" need to do more than pour it out

"Sweet Magnolias" does a good job of dispelling the myth that by already having children, a woman is un-dateable, undesirable. Both Maddie and Dana Sue, who has a teenage daughter with her estranged husband, have no problem in that department. The issue as a single mother is not "Who will I ever find to love me?" (gag), but, "Is this person worth the babysitting money?" And, "How am I ever going to find the time?"

In Jeremy (Chase Anderson), a vegetable farmer, Dana Sue may have found a person who understands that her daughter must come first, always. It's unclear that she recognizes that. It's also unclear if Maddie's boyfriend, Cal (Justin Bruening), with his explosive anger and obsessions about a previous relationship, is a good fit for her family. Maddie has enough to deal with; she doesn't need a fourth, temper tantrum-throwing child.

Fortunately, "Sweet Magnolias" also resists that other myth about single moms and relationships: that single moms are easy to get to date you, desperate for a man and promiscuous. This trope runs thickly through TV portrayals of single motherhood from "Gilmore Girls" to "Ginny and Georgia," though in the latter show, the single mom's propensity for marriage is due more to a desperate need to just survive and provide for her kids.

The relationship fickleness ascribed to single moms like serial dater Lorelai in "Gilmore Girls" may be more due to the hectic nature of our lives. Parenting children alone means a lot of emergencies. Some potential partners don't understand this, and nothing raises your standards quite like having a child you have to protect.

Early on, when my son was a baby and I was unexpectedly left to parent him alone, I learned quickly that some friends weren't going to be around. Some friends weren't going to be friends anymore, or to understand that the nature of parenting solo — with kids getting sick, kids having a terrible day, a non-custodial parent or babysitter not showing up — meant canceled plans, meant I was sometimes running late or fell asleep during movies because I was so exhausted, or couldn't stay out late because I had to pay for a sitter.

Where "Sweet Magnolias" starts to get a little sour is the lack of showing anything like this.

The town where the characters live is called Serenity and never has a village been more aptly named. Like Lorelai, Maddie has a huge, beautiful house she gets to keep in the divorce. The fact that she does not seem to have worked outside the home before her unexpected divorce — a common experience that can doom many single moms due to the lack of their own career history, savings, education, even credit cards in their own name — is not a problem. Because Maddie and her friends start a spa, and it's a huge success, and I guess they have health insurance.

Nowhere is anxiety about money present for the single mothers of Serenity. They don't struggle to find enough childcare to work and to find enough work to afford childcare, as nearly all mothers do, especially single ones. Either Helen must be the best lawyer to ever live or they exist in a utopia. "It would be years before women on TV and films could openly struggle," writes Elena Nicolaou in a Refinery 29 piece about TV single motherhood. But I think we're not there yet.

The newest single mom in town is Noreen (Jamie Lynn Spears), the nurse whom Maddie's ex-husband, Bill (Chris Klein) had an affair with. Bill and Noreen are no longer together, but Noreen makes the brave move to live with a friend — a new friend who's willing to have a mom and newborn room with him, no problem — and not her parents, who have gamely offered help.

But who's going to watch the baby while Noreen works? Where is she going to work? Who's paying for all this? How inexpensive is childcare in Serenity, and where are all the daycare centers (other than Bible camp, which seems to be the only place kids go in the summer here)? In most places in America, you need to get on the list for daycare before a baby is even born, and I don't think Noreen did that.

Noreen also has no problem getting child support for her child. Bill is quick to reassure her parents that he's supporting her and the baby. He's also paid the hospital bill in full. What planet is Serenity on, and how can I move there?

The struggle to receive proper, legal child support is unending for many single mothers — 70% of whom never receive any child support at all. Several mothers I know decided never to go to court to try to get support, not having the money for a lawyer as well as not wanting to provoke ex-husbands into violence. (The only reason I could afford a lawyer is that I sold a book; I signed over the entire book advance to her.) Single mother-headed households are almost five times as likely to live in poverty as married couples.

"Sweet Magnolias" shows the lack of father involvement as Bill emotionally distances himself from his kids. For the most part, though, Bill is an easygoing ex, a non-issue. He doesn't fight, perhaps because he was never really there, even when he was there — and now he's distancing himself more than ever as he moves away. We get more than a hint of violence from Dana Sue's ex-husband, but Bill is simply ineffective. He slumps and shrugs.

Noreen, the mother of Bill's most recent child, falls into the single mom trope trap of being young and emotionally stunted, like TV single moms from Lorelai to Annie on "Good Girls." They eat junk food, they stay up late with their kids. They go to the kids' parties, wear their clothes. They are the cool mom. They are really just kids themselves. Noreen's immaturity comes more in the decisions she makes: to refuse her parents' help, to stay in a town where she doesn't have a job, to visit one of Maddie's other children without asking Maddie first. One hopes the show allows her to grow.

The last, future single mother of Serenity, Helen, bucks the TV trope by being older, unmarried, successful and Black. She's choosing to become a mother alone, a bit later in life (thankfully, the show has not yet age-shamed her). She tells her would-be partner Erik, one of the best characters of the show (the compelling Dion Johnstone in an emotional role) about her decision early in their relationship. She sticks with it, even though she may have unexpectedly found love with him. Not only is Erik not scared away by her desire to become a mother on her own terms, despite his own trauma about family, he doesn't try to jump in and make everything better, either: offering to marry her or to have the baby with her.

Helen's journey through IVF is an extraordinary opportunity for the show to delve into this often long, expensive and difficult experience some parents go through. But "Sweet Magnolias" has yet to talk about how the world treats single mothers, no matter what in life brought us there.

One thing I didn't expect when I became a single mom was how mad everybody would be about it. Especially men. This wasn't my idea, guys. Also? I didn't do this having a baby thing by myself. But the whispering, shame and blame I have endured is nothing compared to what single mothers of color go through.

So far, there doesn't seem to be any racism or homophobia in the small Southern town of Serenity. Good for Serenity, I guess. But with a Black woman becoming pregnant alone, "Sweet Magnolias" has the opportunity to touch upon desperately needed, real stories of medical racism and Black maternal health. I hope they dare to engage with those storylines and to respect them.

Yes, "Sweet Magnolias" is a fantasy, but the danger of showing only the fantasy of single motherhood is how isolated it makes those of us — millions of us — living the reality feel.