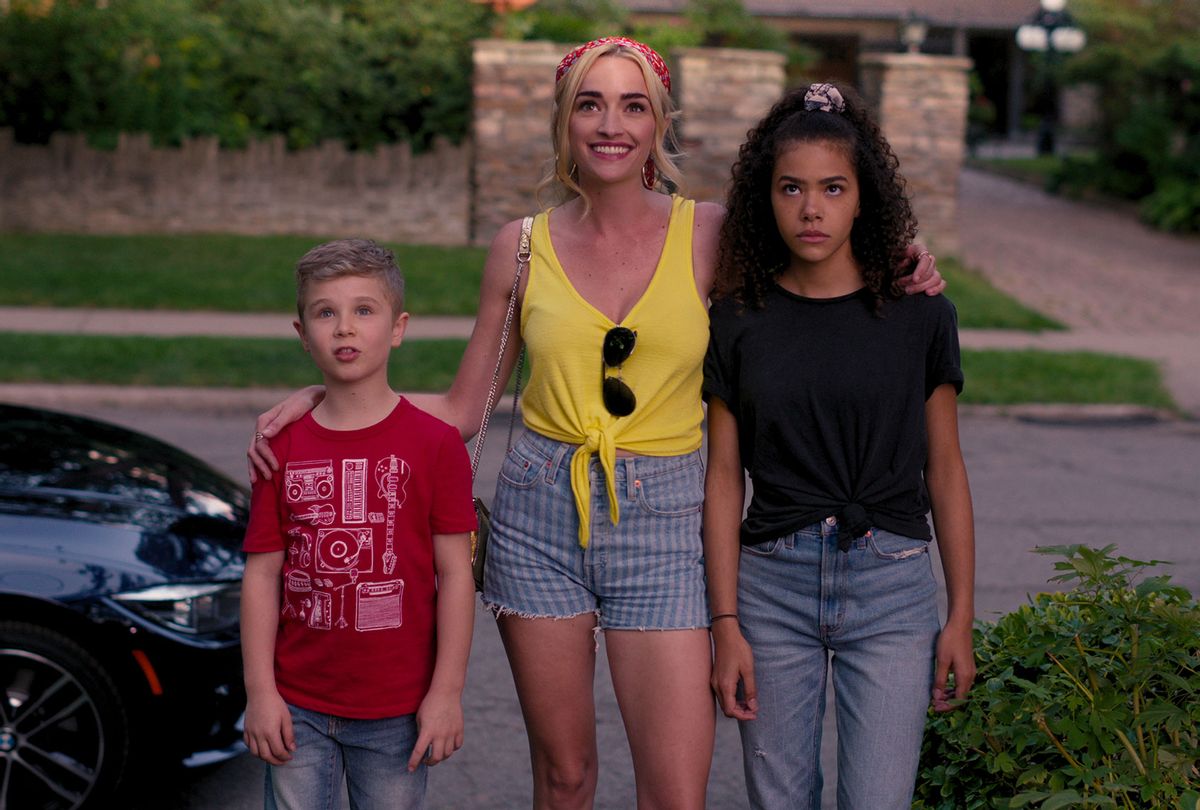 Stars Hollow, like the family relationship around which it revolves, is a TV fantasy built on a foundation of spun sugar. This is precisely what the loyal "Gilmore Girls" audience loved about this little American paradise and adored about Lorelai Gilmore and her daughter Rory. More than merely a mother and daughter who deeply loved one another, they were also best friends.

Watch a few minutes of "Ginny and Georgia" and one can assume Ginny Miller (Antonia Gentry) takes issue with that portrayal of the mother-daughter bond despite the best efforts of her mother Georgia (Brianna Howey).

We meet them at the moment that Georgia's husband dies suddenly. Shortly after the funeral she uproots Ginny and her half-brother Austin (Diesel La Torraca) from Houston, Texas and moves them abruptly to Wellsbury, Massachusetts, a wealthy enclave nestled around a postcard-perfect main drag. Ginny accurately describes it as looking "like Paul Revere boned a pumpkin spice latte." But we recognize it as a stand-in for someplace else.

Series creator Sarah Lampert plainly created Ginny and Georgia (Brianna Howey) as a film negative's version of Rory and Lorelei, inserting darkness in her characters where "Gilmore" embraced light. She even namechecks that other show in the opening episode she wrote. People who click in and expect a hit of that old Gilmore froth may be disappointed though because "Ginny & Georgia" is not that show.

It lacks the former's gymnastic dialogue and unapologetic sweetness. Aside from Ginny's defensive pride in her high academic achievements the writers don't bend over backwards to make intellectual viewers feel better about watching a coming-of-age drama.

None of this is an argument against "Ginny & Georgia." I'm simply explaining what one shouldn't expect from a show that blends teen angst, adult mystery, and soap opera twists into 10 episodes while also leaning into harsher realities rarely if ever confronted in Stars Hollow.

The only things Lorelai and Georgia have in common is that each is lovable, easy to root for and fiercely loyal to her daughter. But where Lorelai is pure sunshine, Georgia's glow is purely cosmetic. Ginny loves her mom, and she also knows she's dishonest, curiously quiet about her past, and probably dangerous. Georgia makes promises she can't keep such as assuring her kids that she'll refrain from dating anyone to focus on them. But once she gets an eyeful of Wellsbury's mayor Paul Randolph (Scott Porter from "Friday Night Lights") that assurance flies out the window.

Wellsbury is the kind of town built for people who look like Georgia, which makes it ripe for conquest. For Ginny, whose father is Black, it is less welcoming. Still, the chameleonic Georgia sees the place for what it is and does what she has to do, changing her appearance to fit in with its class-conscious denizens.

When she and the kids first arrive in town, Georgia is wearing denim cut-off shorts. Not long after she gets Ginny and Austin situated at their schools, Georgia hits the boutiques and finagles herself a wardrobe and a blowout suitable for blending in with all the right people.

At the same time Ginny is confronted by an English teacher who assumes she isn't cut out for his advanced placement class based on taking one look at her – and he's not judging her fashion choices. Efficiently cutting the man to the quick in front of her class gains her a friend in Maxine (Sara Waisglass), who also happens to live across the street from her. She also attracts the attention of popular nice guy Hunter (Mason Temple) and Maxine's troubled-but-hot twin brother Marcus (Felix Mallard). There are worse fates for a teenage girl than to have two of the best-looking guys in school contending for her affections. And yet, Ginny also has to navigate peers wanting to touch her hair, calling her "exotic," and asking which of her parents is Black.

"Ginny and Georgia" could have left out these small aggressions instead of quite accurately inserting them into its narrative stream and had a by-the-numbers appealing Netflix teen show to work with.

There are plenty of other reasons for Ginny to feel like an outsider, including the classics: she's the new kid in a small town where everybody knows everyone else. She's the child of a single mother with a luscious Southern drawl built to provoke snobbery, particularly in tony New England.

The fact that the writers make the effort to confront the casual racial politics of places like Wellsbury should earn it a bit more respect than it may be getting. And it handles this covertly, for the most part. That clothes shopping spree in which Georgia indulges? Entirely accomplished with a string of small cons. Whereas later, when Ginny succumbs to peer pressure and tries to fit in by joining them in shoplifting, she's the only one to gets caught because she's the only one the boutique owner searches.

Playing with class conflict in a show like this is easy. Leaning into other essential American ugliness while permeating the plot's intrigue with black humor and snark is a more challenging knit.

This show blends all of these emotional colors nicely while also ensuring that neither Ginny nor Georgia or anyone else comes off as one-dimensional. Not even Wellsbury's resident queen bee Cynthia (Sabrina Grdevich) is entirely detestable; she may be used to getting her way, but she's also being surreptitiously undermined by Georgia, who is all honey, smiles and ambition.

As messy and terrifying as Georgia can be, she's also an entertaining maneater and thrilling to watch. She's a predator, but less a wolf than coyote, a creature whose prey drive is coded for survival as opposed to dominance. Her personality also wins her a true friend in Max and Marcus's mother Ellen (Jennifer Robertson), who may be Wellsbury's only truly easygoing, accepting person. (Not for nothing, she's also married to a deaf man, and in all of the scenes the family shares the actors all use sign language as they're saying their lines.)

Of course, all of Georgia's existing problems compound as she begins setting others into motion, further alienating her already suffering children in the process.

Gentry's sensitive performance shoulders the weight of "Ginny & Georgia," and she wears her character's excitement, hope and pain with a heartbreaking lightness. When we experience the world through Ginny's eyes it's as intoxicating and seductive as her mother wants to it be, but as she warns us in her moody voiceover narration to entirely buy her mother's act is foolish.

Ginny has her secrets too. She's also is the daughter of a shady woman who lies, steals and cheats to get what she wants, perhaps not expressly to get ahead but definitely to stay a few strides in front of something she's running from. Howey never allows us to completely hate Georgia, though, even when we watch her make choices to get by in the here and now that may make life more difficult for them down road.

Nevertheless, as part of a family of series that includes and is defined by "Gilmore" on one end of the scale and the stylized nightmare that is "Euphoria" on the other, a show like "Ginny & Georgia" plays like a product of Netflix's algorithm – a little Stars Hollow and a few parts "13 Reasons Why" with a touch of "White Oleander" to add some spice. But that only proves that it knows its audience and trusts in its awareness of the world we live in now, a place where Stars Hollow feels more unrealistic than ever. Wellsbury is fictional too, but we know its places and its people. That may be why we can relate more to the Millers with all their unenviable flaws and the melodrama mother and daughter create around them.

Sane people wouldn't dream of wanting to live through (or relive) Ginny's aches or contend with the menace Georgia attracts through her actions. But damn if they aren't a good time to view from a safe distance.