Bless their hearts: The women of Netflix's "Sweet Magnolias" need to do more than pour it out

In Netflix's Southern drama about a trio of friends, the fourth "magnolia" is rage 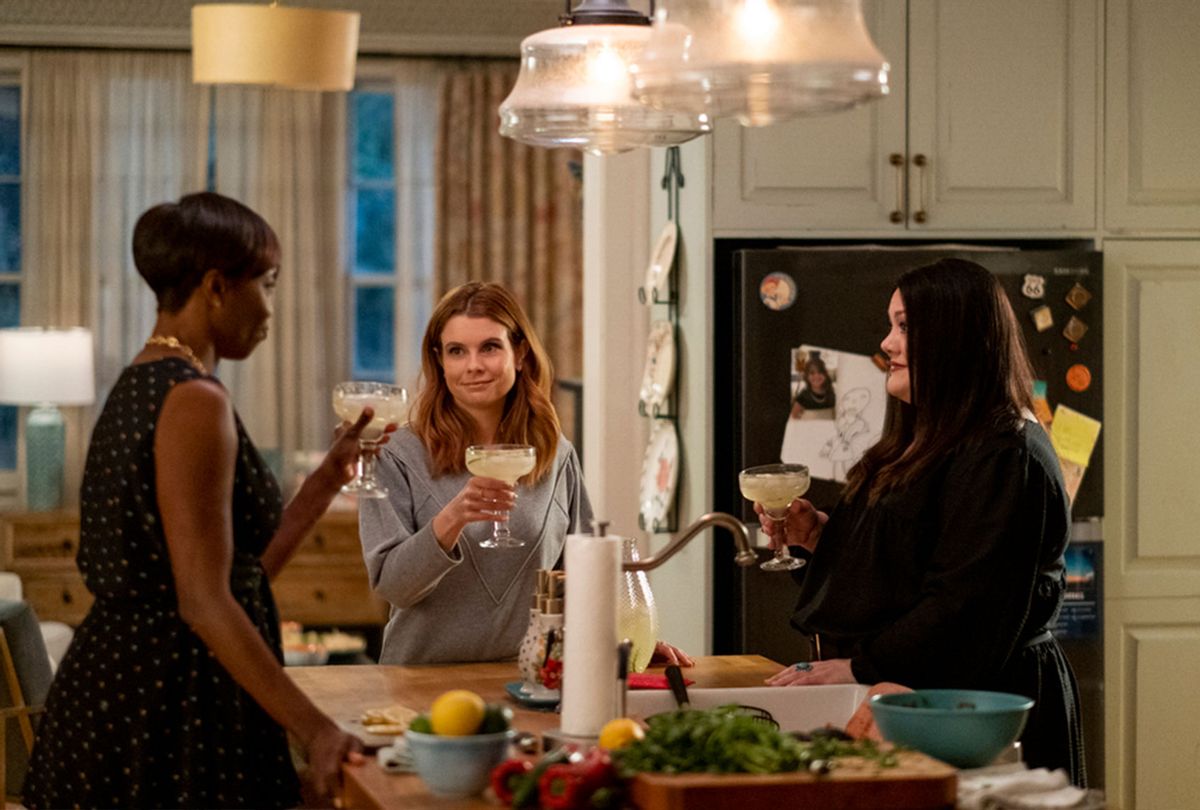 My family lived in rural Georgia when I was a child, and as anyone who's spent time in the South knows, "Bless your heart" can be one of the more passive aggressive, regional expressions a person can muster. At least in polite company. In season 2 of "Sweet Magnolias," main character Maddie (JoAnna Garcia Swisher) flings the phrase around like warmup pitches in a baseball game. I wish, however, she said it more than twice.

Everybody's mad in the first episode of the return of Netflix's "Sweet Magnolias" — and I for one could not remember why, at first. It's quite the in medias res opener in a hospital emergency room with nearly the entire cast picking up straight where the season 1 finale left off. Tensions start high, which makes it difficult for the scenes to have much rise and fall, and would make it impossible for a casual fan to simply drop in.

But not everybody is allowed to stay mad, especially not the women.

Related: "What it means to be a red wine mom"

"Sweet Magnolias," based on a series of books by Sherryl Woods, has been compared to "Virgin River." Unlike the Netflix hit adapted from Robyn Carr's books about a nurse who seeks a fresh start in remote northern California, the characters of "Sweet Magnolias" live in the same small South Carolina town where they were born and raised. Family is a big part of the show. So is festering. The show provides less of an escape than shows like "Virgin River" and other romances, because of the characters' refusal to deal with their emotions, especially anger.

"Sweet Magnolias" centers on three women. Maddie, the recently single mother of three kids, who was a wealthy doctor's wife and now has opened a popular spa with her two best friends: Dana Sue (Brooke Elliott), a chef and the mother of a teen, and Helen (Heather Headley), an accomplished lawyer who is childless (so far). Together, they are the magnolias.

Everybody's successful in their town, appropriately called Serenity. Even financial problems, like Dana Sue's restaurant needing a new investor, are swiftly solved without tension. Money problems aren't real, and everybody looks great in their designer clothes.

Despite this seeming utopia, Maddie, Dana Sue and Helen have a lot to be angry about. Mostly, men and children. Neither live up to their promises. Both are constantly disappointing and betraying, whether getting into fist fights in hospital waiting rooms, lying or having yet another child with a woman not their wife (that would be a man who does that).

There are a lot of ex-husbands and ex-lovers on "Sweet Magnolias," and as a longtime single mother, I can attest that the women of Serenity have plenty to be upset about. But they're not. At least, not outwardly. They won't allow themselves to dwell on that unladylike and unchristianly human emotion: anger.

The only time the three main women express anger is at their margarita nights. (Which, at this stage of the pandemic, do look heavenly.) But it's not anger so much as gentle sighs. One of the friends blends a nice pitcher of drinks, makes snacks. When someone brings up a frustration, the other women say in a singsong chant: "Pour it out."

But they don't. Not really. The characters bring up real issues in their lives, wrongs that have truly been done, but the other two are quick to remind her to forgive, to do the Christian thing — which is, apparently, not to feel your feelings. Religion is brought up so many times in the second season, you might begin to question: Is this "Sweet Magnolias" or "Touched by an Angel"?

It interferes with the story because it shuts down further questioning. It shuts the women up like a lid Dana Sue would clamp on a boiling pot. The constant referral to religion slams down any real conversation or questioning. Bible verses replace advice. Conflict — necessary for any fiction — sputters out. The women sip their drinks. At a time of great disagreement, they send a magnolia to each other. Once the flower is received, the feud is over. No argument.

In this milieu, we have Jamie Lynn Spears playing the fallen woman character, Noreen: a former nurse who gets pregnant by a (married-at-the-time) man she decided in season 1 to leave. Noreen's redemptive arc — or rather, how the other women decide to finally embrace her — is one of the only storylines with real heart.

Spears's reccurring appearance has courted controversy, with some fans calling for a boycott of the show or removal of her character, after her comments about the 13-year conservatorship of her older sister, Britney. That conservatorship, a court-ordered arrangement many called ableist, which gave Britney Spears's father control over Britney's personal and professional decisions and finances, finally ended last November.

The younger Spears published a memoir in January, "Things I Should Have Said," and has brought up Britney repeatedly and disparagingly in interviews. Ironic, given that Jamie Lynn Spears plays a young mother very much at the mercy of others in "Sweet Magnolias."

Forgiving Noreen and offering assistance to her and her baby makes sense in "Sweet Magnolias." Forgiving men for patterns of repeatedly abusive behavior, less so.

There are times in the show when so-called small town values tread dangerously close to enabling violence and patriarchal abuse. Male characters have less of an excuse yet are given much more leeway for their serious rage: including destroying things, verbal threats and escalating physical violence.

The men of "Sweet Magnolias" exist in a kind of dichotomy often reserved for women: They are saints, like the lovely, kind and suffering Erik (Dion Johnstone) who will wait for Helen forever, or earnest Jeremy (Chase Anderson), not scared away by Dana Sue's terrible choices, or Isaac (Chris Medlin) who rearranges his whole life to help a virtual stranger.

Or they are sinners, mercurial like Dana Sue's smug estranged husband (Brandon Quinn) scoffing at her for "updating the score, sweetheart." Or Maddie's boyfriend Cal (Justin Bruening), who turns on a dime into someone manipulative, impulsive and dangerous.

Cal, like Nate on "Ted Lasso," has been given a personality shift in season 2 of "Sweet Magnolias," high geared into a villain on the fast track. Maddie's face the first time his veneer slips into rage, when it dawns on her she doesn't know the man she loves — the man her children spend time with — not really, not at all, is the most real part of the show's entire run.

It's unsurprising perhaps that Erik and Isaac become close friends, and regularly make space and time to talk about their feelings together. They're the only male characters who do so. But male anger is an emotion that is permitted, exercised in the throwing of objects, the ripping down of signs. Everyone looks the other way when Cal seethes after a sports team loss, pouting like a petulant child.

The male refusal to accept consequences for violence is learned young. So is enabling it. "You're just grumpy," Maddie's youngest child Katie (Bianca Berry Tarantino) says to her brother after he has been raging for weeks following an accident where he was at fault. Likewise, the adult women don't take Cal's rage seriously enough early enough. When asked if she's worried about his sudden temper, Maddie dismisses it: "It was just a flash of a side of him that I didn't know was there." Her friends advise her to "keep an eye on that." And then they move on.

While it's true that this season sees a young male character eventually in therapy with a family friend, most men in "Sweet Magnolias" deal with anger only by storming out. Or, much worse. Female anger is not allowed at all, aired only in the "pouring out" of drinks.

When the face you show polite society must be as tooth-achingly sweet as those pink margaritas, a lot gets buried. This season reveals some secrets, but like the dishes on Dana Sue's stove, most deeper stories — and especially, feelings — are still simmering on the show. They may sputter out entirely. It's frustrating and probably fruitless to wish the women characters spent more time publicly speaking their minds, especially about the way men treat them, and less time holding their tongues.

Pour one out for "Sweet Magnolias" and the lives of quiet, socially acceptable desperation — emphasis on quiet — these women must lead.