As the Syfy show enters its second season, the greatest love affairs on television are now between friends 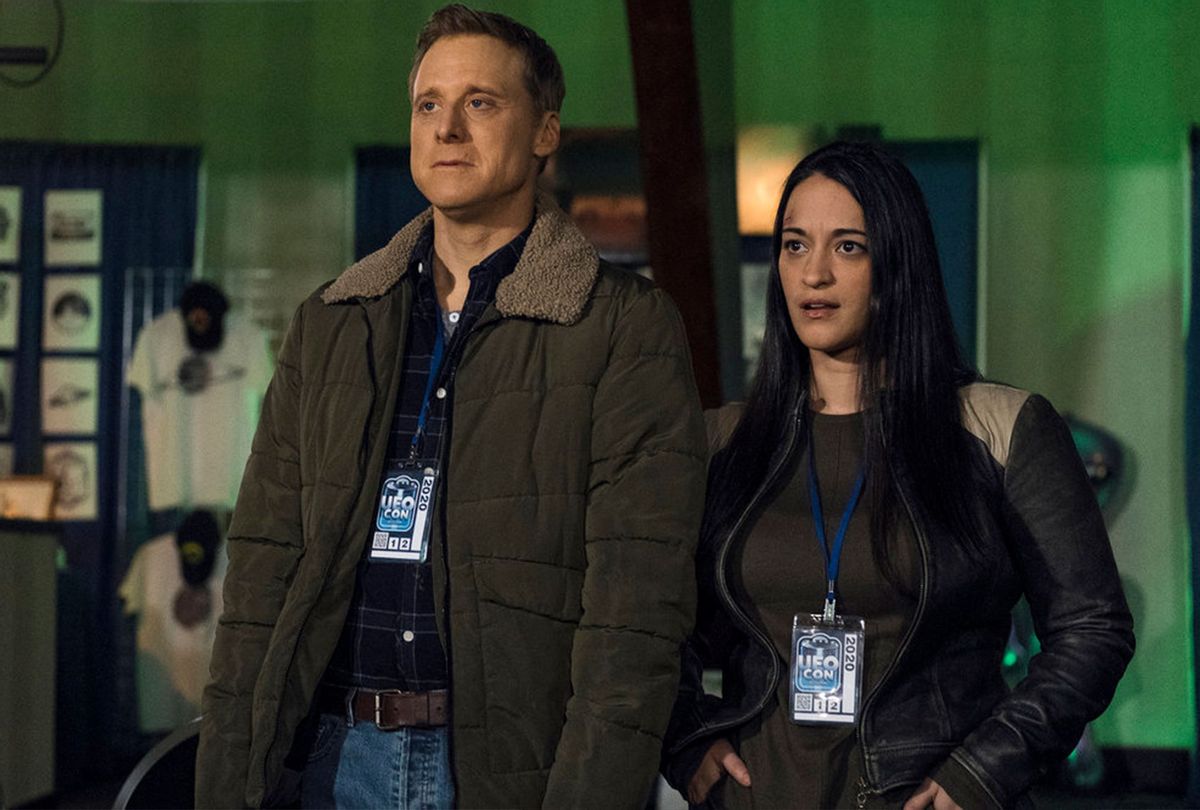 When Asta Twelvetrees first sees Harry Vanderspeigle on "Resident Alien," she thinks he's someone else.

She can be forgiven for that as Harry is not really Harry: human doctor on vacation, but an alien with an unpronounceable first name who has crash-landed on Earth, killed one Dr. Vanderspeigle, thrown his body in an icy lake, and taken over his life and physical appearance. All great love affairs have to start somewhere.

It's not exactly a meet cute. But the Syfy show, now in its second season, has other hallmarks of romance. Asta (Sara Tomko) and Harry (Alan Tudyk) have frosty interactions at first, possibly because Harry is literally another creature. He keeps offending her. She keeps confusing him. They end up working together closely in an office where Asta is a nurse — oh, the potential for office place romance! It never actually happens, at least not yet. But the love affair does. Like the best romances on television right now, "Resident Alien" is a love story between friends.

"Love means never having to say you're sorry" went the line in "Love Story," the 1970 tragic romance film starring Ryan O'Neal and Ali MacGraw, the actor for whom my parents named me. That adage definitely holds true for "Resident Alien." In the first season, newly in his human form, Harry the alien struggles with how to move through the world, physically and emotionally. In his very first sight of Asta, asleep in a chair, he assumes she's dead, sniffs her and pokes her face. "What the mother hell?" she yells. "You're not dead," he replies.

As Harry becomes the ad hoc town doctor for the small, mountain community of Patience, Colorado, he flounders his way through being alive, calling the mayor "Mayor Snowflake," imitating the body postures of others without realizing that might be offensive or at the very least, strange. He's like a large toddler in a parka.

Tudyk should teach a graduate class in line reading. His odd alien inflections turn what could be throwaway lines into meaningful, often hilarious moments. Every line, every time. Harry often does not know where to look, and Tudyk somehow manages to make his face, well, utterly alien with his shifting glances, tight jawline and nearly closed mouth. You can see him thinking in his eyes, and see him coming to the wrong, naïve conclusion most of the time, extolling the brainstorming properties of whisky, for example.

Despite her confusion and annoyance with him, Asta defends Harry from the beginning. "Don't talk to me" she tells the sheriff (Corey Reynolds) when he tries to banter with her about how strange Harry is. And after a night of drinking (which Harry feels pressure to attend, like every lower-level employee coerced into happy hour, to confirm he's "stopped being a weirdo"), Harry and Asta slip quickly into helping each other.

She tries to assist him at first without realizing how much he needs it, coaching him through human conversation. "This is when you're supposed to ask me about my childhood." Harry in turn assists Asta, skipping straight to the advanced love level of helping her move. And soon, defending her life from the abusive man she married at 16 after she got pregnant.

Harry's bluntness perhaps allows Asta to trust him sooner than she might otherwise. He's disarmingly direct. He hasn't developed yet the social niceties of many humans. As a woman of color in a small, overwhelmingly white town, Asta tells him: "I've always been an outsider. Maybe that's why I understand you. You're just different. I know what that feels like." In the first episode, sharing a moment with Harry while overlooking a mountain view, she says one of the best lines of the show: "Sometimes just feeling human is alien to me."

You can be weird with your love. You can be yourself. And the confessions bring them close. But like the best love relationships, they help each other be their better selves too. Harry learns loyalty, devotion and sacrifice from Asta. And from him, she learns patience and compromise. The quick Asta is a good match for Harry, and Tomko and Tudyk play off each other with sparking chemistry.

But Harry the alien is on a mission that he keeps secret even from the woman he's closest to, the one he loves. He's been sent to Earth to destroy all humans, and as soon as he finds the pieces of his spaceship and a device, he will do just that.

As in the best romances, he didn't plan on her. "She's not your problem," he tells himself in vain, like any rugged romantic lead, before turning his truck around and going back to rescue Asta.

Asta has a secret too. When she became pregnant as a teen, she gave up her baby for adoption, pressured by her abusive partner. Her daughter still lives in town, a smart, moody teen who is at first unclear about her birth mother's identity. Asta tells Harry about her child right away, and Harry accidentally spills that and a lot of Asta's secrets, perhaps not being entirely clear on the concept.

But he keeps his big secret from her until the last episode of the first season. He's an alien. Like a real friend, like a real love, Asta does not turn away from him after finding out his true, otherworldly identity. She's surprised and upset, but they work it out. She helps him. The first episode of the second season finds them closer than ever.

More and more, the greatest love affairs on television are between friends: Shauna and Jackie, Moiraine and Lan. And Harry and Asta.

Maybe platonic love is harder to find than romantic, finding someone who will stick by you and you by them as you both make mistakes and grow and change. And maybe Harry and Asta's love will shift into something more in season 2 as Harry will risk not destroying the entire world for her. Or, destroying it all except for her.

But it's love that keeps her by Harry's side, teaching him: "on Earth, you don't really have to be related to be family . . . Sometimes family is just people in your life that you love, that you'd do anything for." It's unconditional love for Asta that causes Harry to insist to her, even as it goes against his alien nature: "We are friends. And I won't kill everyone." Maybe love is never killing everyone.