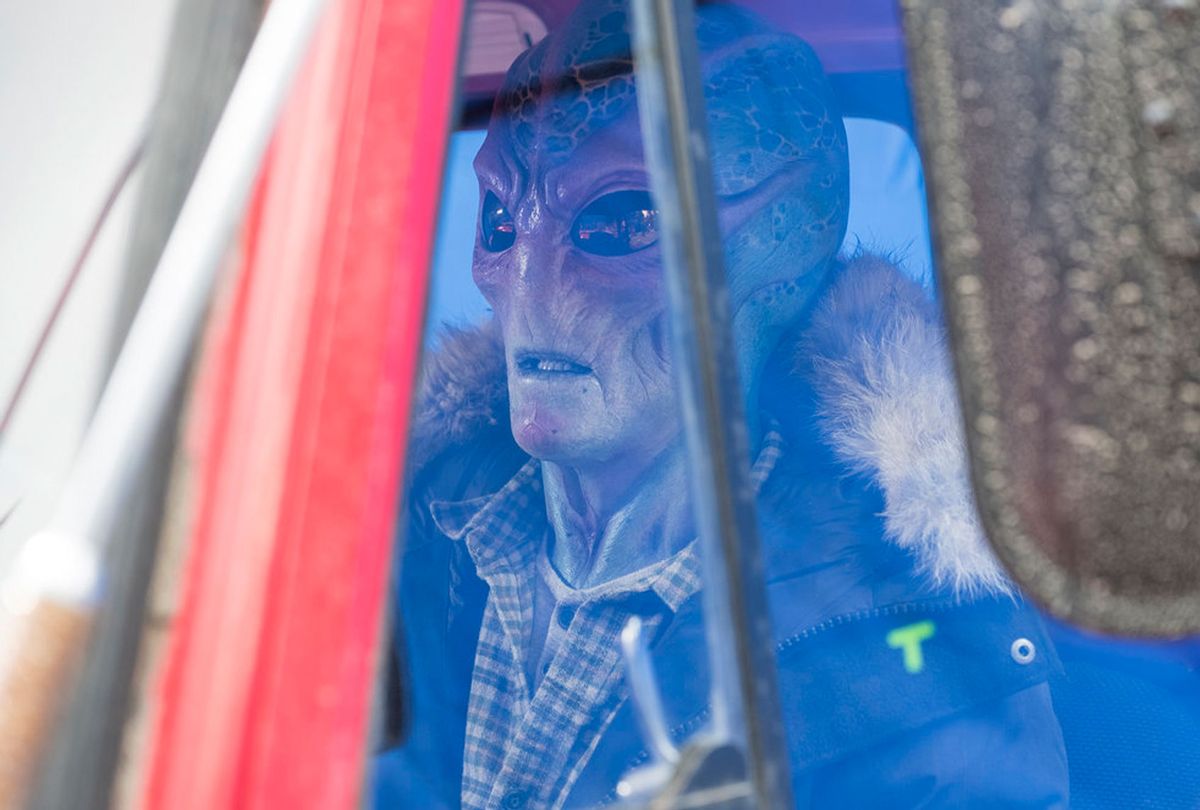 No character actor does awkward like Alan Tudyk, the man who gave "Firefly" its goofy soul and stole "Rogue One" out from under nearly everyone else in the cast despite never appearing onscreen in his own flesh.

Syfy's "Resident Alien," based on a comic book series, splits the difference by casting Tudyk as an extraterrestrial stranded on our planet after his malicious mission goes awry. Here, Tudyk is a being who goes by the highly unusual name Dr. Harry Vanderspeigle and forces the citizens of Patience, Colorado to live up to the town's name in virtually every interaction with him.

The remoteness of the place and its need for a new town doctor pretty much forces them to after their longtime physician turns up dead. In the way of all out-of-the-way places where the odds are good and the goods are odd, Harry's weirdness and flat affect seem harmless. The guy whose life he swiped happens to be a wealthy part-time resident, and that also helps immensely since nobody truly knew him.

On the whole the audience sees his character as most townsfolk see him, as another human who isn't comfortable in his own skin, hasn't quite mastered the subtleties of body language or what to do with his face and with negligible interpersonal skills.

A couple of people see the "doctor" for the huge-eyed amphibian-looking creature that he actually is, and that frightens him and them, until fright gives way to curiosity and curiosity evolves into something like caring.

This is the story "Resident Alien" is trying to tell from the perspective of Tudyk's bizarre yet charming character, and when it does that it's a sweet series that places to the actor's natural ability to surprise g us in new ways in every episode.

If you were to judge by the title's dual significance – the term "resident alien" is used to describe an immigrant who attains lawful resident status in the United States – you may be expecting the show to use Harry's situation to metaphorically examine the obstacles faced by newcomers in a land that seems welcoming but actually isn't.

Presenting Tudyk's character as both the stranger in a strange land and in the role of interspecies bigot enables the show to approach this well-worn concept in an unusual way. He's an outsider hiding in plain sight who learns English and Earthly customs by binge-watching "Law & Order," but he's also a member of a race utterly convinced of its own superiority.

Harry explains in one of the show's many instances of voiceover narration that if the universe had a scale for intelligence, "humans would land right below lizards." Crashing on our planet forces him to interact with the lower life forms he believes us to be, and he slowly begins to realize the many ways his kind misunderstands and underestimates humans.

Nevertheless he refuses to veer from his original directive even as it increasingly is at odds with his burgeoning emotions and evolving connections with the people around him like Asta Twelvetrees (Sara Tomko), the physician's assistant who works with him at the town's medical clinic.

Harry and Asta make a wonderful platonic pair because they both feel like outsiders, and the people who are the most interesting to follow also fit this description even if they don't specifically say it out loud. And they each nurture relationships that are established solidly enough to make for interesting storylines.

Asta's best friend D'Arcy (Alice Wetterlund) is a heavy-drinking bartender with dollar signs in her eyes who throws herself at Harry, and her efforts to overlook his complete lack of charisma allow Wetterlund to shine through her antics.

Viewing the world through Harry's calculating, emotionally chilled perspective enables the show to circumvent potential discomfort with addressing any realistic issues related to race and culture in Patience, at least initially.  Small moments acknowledge the existence of ordinary human prejudice in this world, particularly when a subplot involving Max's smarter friend, a classmate who wears a hijab, comes into play.

All told, though, Patience is a kindly and TV-diverse type of town that breaks free of the usual portrayals of small town tensions in ways that can be a tad cloying. Corey Reynolds, for example, plays the town's sheriff Mike Thompson as a combination of Boss Hogg and Rosco P. Coltrane, and in case we're not picking up the homage he loudly dotes on his designer pooch Cletus.

He's also the only Black man you see on the streets of this mountain town, which could be a clue that he's overshooting in his efforts to fit into the culture. Or maybe this is an entirely unnecessarily flourish.

Playing up the ridiculousness of its characters gives the show a slight "Northern Exposure" flavor.  Building upon this is the script's considerate exploration of Tomko's character through the lens of her personal life also highlights Asta's Native American heritage in ways that feel genuine and unforced, and the fact that I have to point that out tells you how unusual that still is in TV.

Where "Resident Alien" doesn't entirely work is its desire to be many shows at the same time as it meanders its way to figuring out which stories it eventually wants to tell. The alien-as-metaphor for immigrants or outsiders is a well-trodden path in TV, seen in series that treat it with solemnity ("Alien Nation" and "Roswell" come to mind) and with a surfeit of humor ("A.L.F.", "3rd Rock from the Sun" and "Mork & Mindy" which, like this show, is set in Colorado).

"Resident Alien" takes what we know about those shows and gestures at modernizing its paradigm to connect with 2021 audiences with a semblance of profundity through this alien that is equal parts genius and ignoramus.

If his misadventures and Asta's emotional journey were the season's main events, that would be more than enough to successfully sustain the first season. Instead the writers decide that every character needs several cases to keep them busy. Just because a show is blessed with an able ensemble cast doesn't mean that every character needs a mystery to chase in order to seize our interest, but if that's the approach they'd better be doing something vital to the main plot or something absolutely fascinating. This not the case here.

Indeed, I haven't even mentioned the government agency pursuing Harry through these episodes because the representatives of said agency aren't even interesting enough to mention. You could cut most of the scenes featuring this D-plot and have a leaner, more meaningful tale.

When "Resident Alien" resists the urge to meander and sits with Harry's various epiphanies about the human need to belong and yearning to forge bonds with others, it glimmers with the potential to be a show that's as heartfelt and contemplative as it is dark and funny. These strengths become lost in its initial journey, but with Tudyk serving as its beacon that may not matter. He'll just keep on stealing our attention until the rest of the show figures out where it need to go.