"Yellowjackets" unapologetically follows YA logic, from the Big Dance to bitter betrayals

A bunch of teens crash-landed and are stranded in the wilderness? May as well throw a rager! 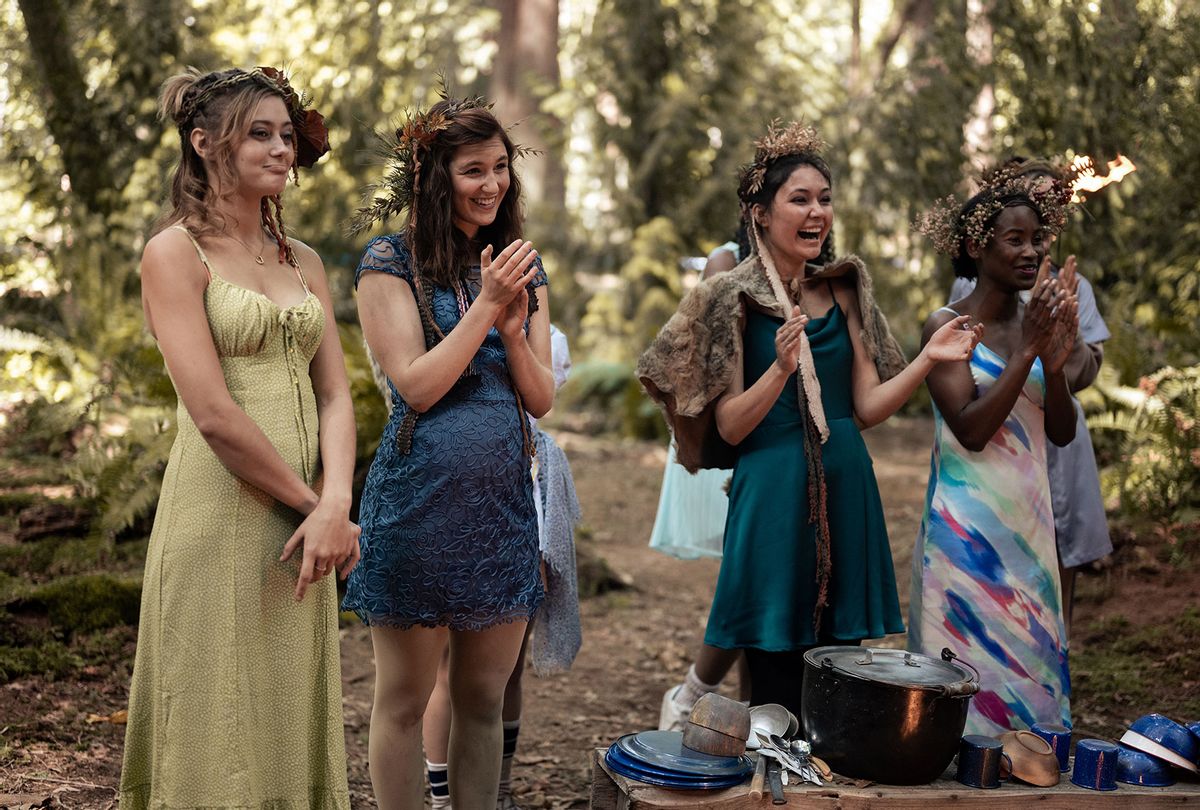 The following may contain spoilers from the first nine episodes of "Yellowjackets."

He would be a "floppy-haired, sad-eyed poet boy who ran the school lit magazine . . . We were going to be like, full rivals until we weren't."

Shauna (Melanie Lynskey) confesses this to Taissa (Tawny Cypress), imagining what their lives could have been, who they might have loved, as she makes up a bed for Taissa to sleep over beneath a poster that reads "KEEP CALM. You can still MARRY HARRY."

This could be a scene from a bestselling Young Adult novel, but it's from "Yellowjackets," the Showtime series about what happens when a small plane carrying a high school girls' soccer team crashes in a remote, mountainous area with no rescue in sight. What happens is (a dwindling amount of) people stop being polite and start getting real. Also, cannibalism.

"Yellowjackets" has been, from the beginning, unapologetically teen. And not "Sweet Valley High" teen with "easy" Annie on the cheerleading squad and oh no, Todd got a motorcycle — but drinking in the liquor store parking lot and taking medication on a breakfast tray teen. When the majority of the cast are adolescent girls, there are going to be scenes of journals and parties. But "Yellowjackets" has taken it deeper and darker with scenes of menstruation and a home abortion attempt.

Being a teen girl is rough. Surviving childhood is visceral, raw, and hard, even if you don't have to shoot and butcher your own wild game. At the time the girls in "Yellowjackets" were growing up in the mid-'90s — and to a different extent, now — you were also maligned, simply for the fact of existing, having a body.

RELATED: The swarming secrets of "Yellowjackets"

In 1996, the year the Yellowjackets were heading to nationals in Seattle, we were three years away from Britney Spears. Mariah Carey and Celine Dione topped the charts. I saw my first concert at the Coliseum in Columbus (Tori Amos; my friend Brad's dad drove us, and waited in the van for us the entire show), and Fiona Apple released her first album "Tidal." The 18-year-old, who had struggled with an eating disorder after being raped at age 12, felt pressure to look and act a certain way in her first music video. The New Yorker labeled her "underfed" while the New York Times called her "a Lolita-ish suburban party girl."

John Grisham, Danielle Steel, and Michael Crichton made the bestseller lists, but books for young adults were a smaller but growing category. We were just a few years away from "Twilight" and "The Hunger Games." I devoured all of Christopher Pike, pulpy teen horror books with florescent covers I had to hide from my mom. After winning a writing contest awarded by the writer Richard Peck, who was unflaggingly supportive of a young writer, I read all of his novels too.

Many were "single issue" YA books, stories that dealt with a deadbeat dad or surviving rape — but I had never read such real, intense, teen issues before. You could write about what happens to you? As a teen girl — many of Peck's compelling narrators were young women — your story could matter?

In the years since, YA has become big business, selling 5 million books in 2013 to a whopping 10 million books last year, with many attributing the jump in YA title sales to Book TikTok. In 1996, the year the plane of "Yellowjackets" never makes it to nationals, the YA book "The Thief" by Meg Whalen Turner was a bestseller, and while the girls in the blue and gold may not have read other teen hits of that year (I know in my school we were much more likely to be assigned "Lord of the Flies" than anything by any living writer), the show certainly uses the logic of YA novels.

A central tenet of writing for children or teens? Get adults out of the way. Adults are useless, and nothing slows a story down faster than parental units. Growing up, most of my favorite novels centered orphans: "Anne of Green Gables," "Emily of New Moon," "The Boxcar Children." "Yellowjackets" applies this tenet with the plane crash that swiftly dispatches almost all of the adults. The lone adult survivor, Coach Ben (Steven Krueger) loses a leg in the accident, and while he gamely does his best on a makeshift crutch, he has limited mobility and influence. As Laura Lee (Jane Widdop) defiantly and rhetorically asks him, when he says he forbids her from flying an ancient seaplane out of the forest, "What are you going to do to stop me, Coach?"

Laura Lee believes she's The One, the singular and unlikely person chosen to save them all, a trope familiar to readers of "Harry Potter," "The Hunger Games," "Percy Jackson," and a whole library's worth of literature for young people. She was saved herself from drowning and saved in the religious sense — for this very moment, she believes, her "purpose." But things don't work out the way she plans.

Some of the most popular YA has a little romance, and if you think that's not going to happen in a group with only one older teen boy (Kevin Alves as Travis), you would be wrong. It may be, as Sunday's episode "Doomcoming" shows us, a sort of mushroom-induced romantic frenzy that gets the group into cannibalism in the first place, like the worst performance of "A Midsummer's Night Dream" ever.

From goalkeeper Van (who wasn't asked to the dance before the crash, like she cares) played by Liv Hewson, finding what appears to be pretty intense, true love with teen Taissa (Jasmin Savoy Brown) to Misty's (Samantha Lynne Hanratty) nauseating and one-sided crush on Coach, love is the air, along with probably snow. "Yellowjackets" has one of the most classic YA romance plots: enemies to lovers as Natalie (Sophie Thatcher) and Travis physically compete to be the hunter for the group. It's a slippery slope from a shooting match along the lines of the film "The Favourite," to angrily then grudgingly working together, then to making out in the wreckage of a plane.

The show also has the traditional love triangle seen in YA from "Twilight" to "City of Bones." Maybe in "Yellowjackets" it's more of a love rhombus — I wouldn't know; I was reading "The Clan of the Cave Bear" behind my textbook during Geometry — but we have the ghostly shadow of a love triangle between Shauna (Sophie Nélisse), Jackie (Ella Purnell), and Jeff (Jack DePew) back home.

Then, once Jackie discovers through reading Shauna's diaries that her best friend was sleeping with her boyfriend (in a car! So YA!), we have a love triangle between Jackie, Travis and Natalie, as Jackie tries to somehow punish Shauna and Jeff in absentia by dynamiting an entirely different couple. In a sense, we also have a love triangle between Misty, Coach, and Coach's boyfriend Paul, at least in Misty's mind. Poor Paul.

Speaking of Coach and Misty, here we have the classic YA plot of fake dating. You may know it from Jenny Han's book "To All the Boys I've Loved Before," which was turned into a Netflix series of films starring Lana Condor. In "Yellowjackets," Coach pretends to return Misty's feelings for him in order to avoid being poisoned by her again. Good luck with that.

A big part of the penultimate episode is THE BIG DANCE. Some "Sweet Valley High" books were literally written about this one event. The girls discover Mari (Alexa Barajas) has been letting some berries rot into homemade wine. "If we have booze, let's have a party," Jackie reasons. "We have dresses, we have booze. We can decorate." Teens need little more than that to throw a rager, especially with no mom or dad at home at the cabin.

"We'll drink rotten berries and celebrate our impending death," Jackie says with the enthusiasm of Ohio University undergrads, who once threw a series of house parties called Fugitive Fest after classes were canceled due to an armed bank robber on campus. The full moon approaches after all, and that the girls know this and know it is a cause for celebration hints at their feral unraveling. 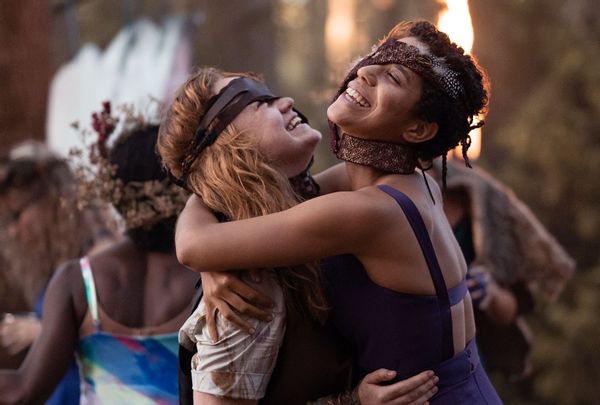 In "Doomcoming," dubbed so by slyly brilliant Lottie (Courtney Eaton), the girls get to decorating for their dance like the high schoolers they are, twisting twigs and leaves into stark decorations, making themselves up from the Caboodles they packed. The event itself is strangely beautiful and, before it gets chaotic, sad. The girls, in dresses they brought for an awards dinner they will never attend, enter under streamers made from rags. Taissa has crafted matching "Phantom of the Opera" type masks for Van and herself, so Van, severely scarred from the wolf attack that nearly killed her, feels more comfortable.

You can be who you are in the woods. You can love who you love. You can be something else too, as the girls, led by Van's primal scream of anguish, join in on the howls of approaching wolves. If you can't beat them, join them. Shrooms will help.

And groups, we know from books like William Golding's probably-should-be-considered-YA tome and from life, are capable of doing terrible things.

Trauma often freezes you in time, at the age you were when it happened. Take adult Shauna's journals, still kept and guarded by her after all these years; adult Misty's cartoonish-themed scrubs and child-like appearance. And the whole adult group's immature reactions. When Natalie (Juliette Lewis) can't get candy out of a vending machine, she throws a fire extinguisher through it. When Misty (Christina Ricci) witnesses Natalie about to use again, ride or die Misty (emphasis on die) busts in and takes the drugs herself.

And when a man hurts her, betrays her trust, Shauna literally turns into the child she was, Lynskey's character flashing back into Nélisse. It's scared teen Shauna that stabs him, not the adult who actually does the deed. It makes sense that YA and its many emotion-heavy threads would find its way into "Yellowjackets" — that stories for teens, about teens, would be the rules, unspoken or not, this story runs on.

Like the end of one of my beloved Christopher Pike books, where multiple teens are dead but the others move gamely on, adult Misty dismisses her time in the wilderness in typical chipper, detached fashion. "It wasn't so bad," Misty says. "We were all friends."