I was in a cult. Britney was in a conservatorship. Our situations are crazy similar

Secretly behind closed doors, we'd both been held hostage, our personhood and civil liberties stolen 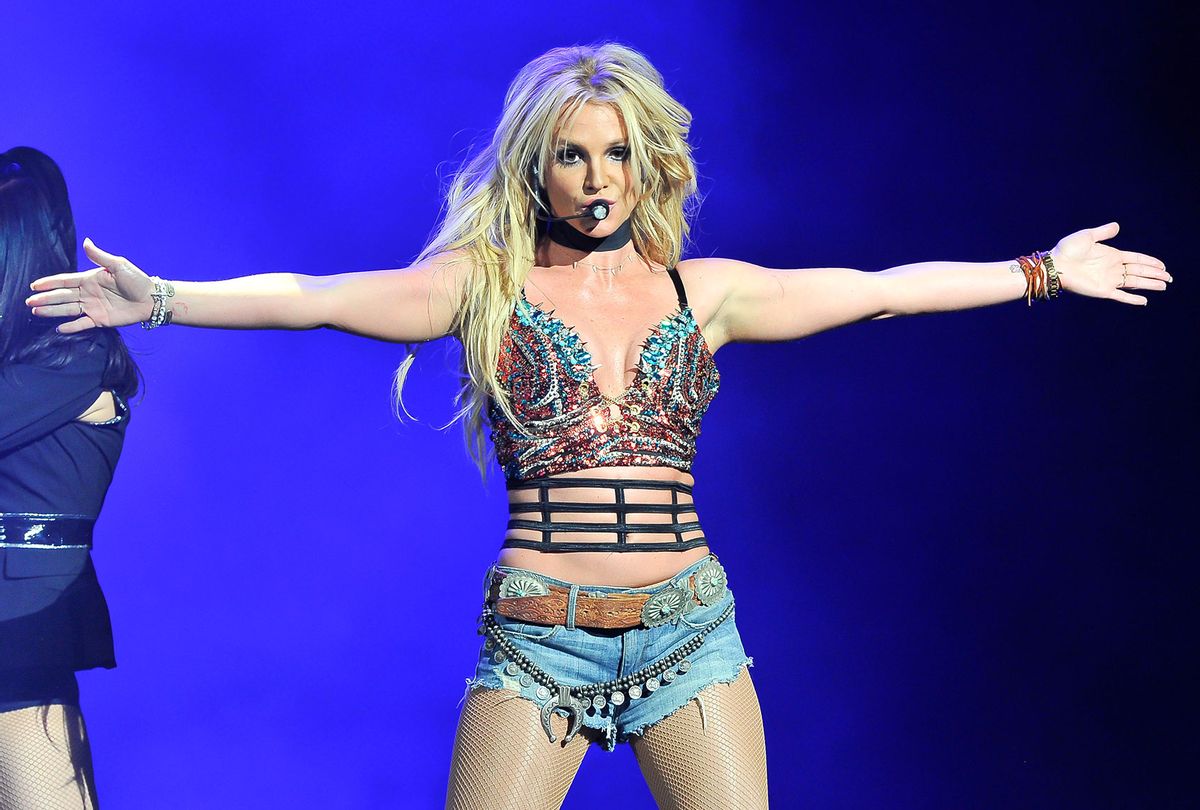 Nov. 12 marked the historic day when after 13 years, Britney Spears finally freed herself from her father's stranglehold, proclaiming, "I ain't a slave 4 u!" The termination process of Britney's conservatorship went into full effect after a court hearing, booting her father, James Spears, as her conservator.

My father converted from Judaism to Islam when I was five years old, and I grew up in a Sufi commune that turned into a cult in the Hill Country of Texas. So, unlike Britney, a legal document didn't tether me to my cult – my childhood did, so my exit was a lot less glitzy.

A judge, attorneys, and cameras weren't present. Nor do I have a paper or a plaque to commemorate the day of my freedom. I don't even remember the exact month, but I do know I was 20 years old living in England, where my leader had moved. I was caring for his eight children and three wives when I finally listened to the little voice inside me that said I needed to find my own path, separate from the belief system I'd been raised in.

I flew from London back to America, escaping the treacherous life I could've continued indefinitely.

Hail the #FreeBritney movement, whose members followed through on their promise to free Britney, proving it takes a pink village wearing feather boas, holding bright pink signs to create change against misogyny. What I wouldn't have done to have a #FreeTamara crusade during my childhood, battling for me to break free from all the men who controlled every aspect of my life.

I could've been saved years of labor trafficking and abuse.

RELATED: The disturbing history of how conservatorships were used to exploit, swindle Native Americans

Even though I was well past being in my teens, which were all the years I missed out on living in the cult, when Britney began dating Justin Timberlake, I was envious of her because in my cult, the girls weren't allowed to date, something we desperately wanted to do.

When Britney hit the airwaves as the sexy Pepsi spokesperson and performed at the MTV Video Music Awards wearing a giant albino python, I was also envious. My dream was to be a dancer, but girls weren't allowed to dance in our cult. We also couldn't wear revealing clothes – we were asphyxiated by swooping fabrics, covering almost every inch of our bodies.

I was 27 and married with two children under five when Britney Spears' "Hit Me Baby One More Time" debuted at No. 1. She looked like the representation of the high school girls I envied — blonde, skinny, a living plastic Barbie doll. She appeared to be carefree. I would've done anything to slip out of my complicated life and into her seemingly seductive life.

In 2007 when Britney began her media descent, she appeared more human and less Hollywood. She looked flabbier around the middle, her skin didn't glisten as much, and the sparkle in her eyes dimmed. But it wasn't until 2019, thanks to Britney's justice warriors, that I learned Britney's life wasn't as perfect as I thought.

Suddenly our lives appeared more alike than ever. Secretly behind closed doors, we'd both been held hostage, our personhood and civil liberties stolen.

The point of the cult was to break the girls' wills and to eradicate our identities so that we'd become compliant zombies and do whatever we were told. Cults are about power and control, and much is the same in a conservatorship, such as Britney's — the purpose is to abolish the selfhood of the conservatee, turning them into a puppet of the conservator.

In Britney's testimony, she claimed her dad controlled what she ate and whether she drank coffee. She also couldn't drive. In the cult, our diets were also controlled. The teenage girls were fed last, often only lentils and rice. For years, we weren't allowed to drink caffeine of any type, and surely not coffee. Just as how Britney wasn't allowed bodily autonomy, having lithium pills forced down her throat, we also weren't in charge of our bodies.

Men controlled how we dressed, how long we slept and when we prayed. Britney was held prisoner in her house, and we were also unable to leave our 100+ acre compound.

Usually, conservatorships are reserved for people in comas or advanced Alzheimer's, but in 2008 after Britney's "erratic" behavior, Britney's dad gained control of Britney's estate and personhood, in essence becoming Britney. My cult leaders also essentially became Tamara. They wriggled their way into my body through mind control, snatching my thoughts and emotions.

Maybe Britney suffered from mental illness, but regardless, it's none of our business. A person's mental state is not up for public debate, ever. Labeling women as hysterical goes back centuries. So, of course, why not label Britney as crazy as a means to control her? Why not label the pubescent girls in our commune crazy when we disagreed with the asinine rules that governed our lives?

If this happened to Britney under the scrutiny of the media with camera lights flashing, what happens to the countless hidden girls and women, like me, who were/are controlled and manipulated by men in their families and in their communities?

When you see a woman "acting out," don't question her sanity. Instead, ask who and what is making her behave hysterically. Point to her social and political systems of control rather than spotlighting attention on her. Stop creating "crazy" women and then calling them cray-cray as a means to manipulate and control them into acquiescing.

Even though I officially left the cult when I was 20, I still suffer from Complex PTSD, including flashbacks, nightmares, and hypervigilance. Breaking free physically is only the first step in healing from psychological trauma. Now that Britney is free from the domination of her father, she may behave in extremes, which is typical of people who've previously lived under chokeholds. So, don't be surprised if Britney acts a fool for the next several months . . . or even several years.

Leave Britney alone. Britney is traumatized, and trauma doesn't have a timeline.

When Britney posts nudes, flaunts her stomach, her thumbs gently moving her white low-hanging shorts lower and lower or seductively sways while rolling and unrolling a pair of black stockings or shows us her yellow thong, she shouts: You don't control me. I'm free.

"Sorry, I'm not sorry," Britney posted on her Instagram. Now that Britney is the ringleader of her circus, and she controls her fertility, her money, what will come next? How lavish will her wedding be? What will her custom Donatella Versace wedding gown look like? What juicy surprises await us? Already, on Insta, Britney wrote, "I'm thinking about having another baby!!! I wonder if this one is a girl . . . "

Britney's fans wait with bated breath, watching as Britney unleashes herself from shackles.

Although womanpower keeps me bound to Britney, a vast chasm still separates us. I didn't jump out of my cult into a plane's cockpit. I've spent my adulthood struggling with finances, relationships, and in finding home. Britney's whiteness, money, and fame will afford her certain privileges I'll never experience.

So am I still envious of Britney? Sure. But much more so, I admire her fierceness, her roar.

Twenty-one years ago in "Lucky," Britney sang, "And the world is spinning, and she keeps on winning." That same year in 2000, in "Stronger," she sang, ​​"Stronger than yesterday. Now it's nothing but my way. My loneliness ain't killing me no more. I'm stronger."

Were these prophecies that would later come true? I do believe forces greater than ourselves work their magic. Hallelujah, here, today, Britney stands stronger, a winner. May she and we all become spokespeople for the people in the world who are still bound, still gasping for air.

Britney posted on Instagram, "I suggest if you have a friend that's been in a house that feels really small for four months . . . no car . . . no phone . . . no door for privacy and they have to work around 10 hours a day 7 days a week and give tons of blood weekly with never a day off . . . I strongly suggest you go pick up your friend and get them the hell outta there!!!!!"

If you know of a girl or a woman held against her will, don't remain complacent. She may use code, like wearing yellow. Her voice may not be audible, but she's screaming for help. May we all become her pink village. May we all allow her to become the pop princess of her life.

Let's fire confetti cannons for all the women in the world who are still chained. In Britney's words, "Hold your head high, fingers to the sky."

More stories you may want to read:

Dr. Tamara MC is a linguist who researches identity in the Middle East. Her memoir-in-progress is titled "CHILD BRIDE."