Spears compared a rehab program she was forced to enter to "sex trafficking," among other horrifying revelations 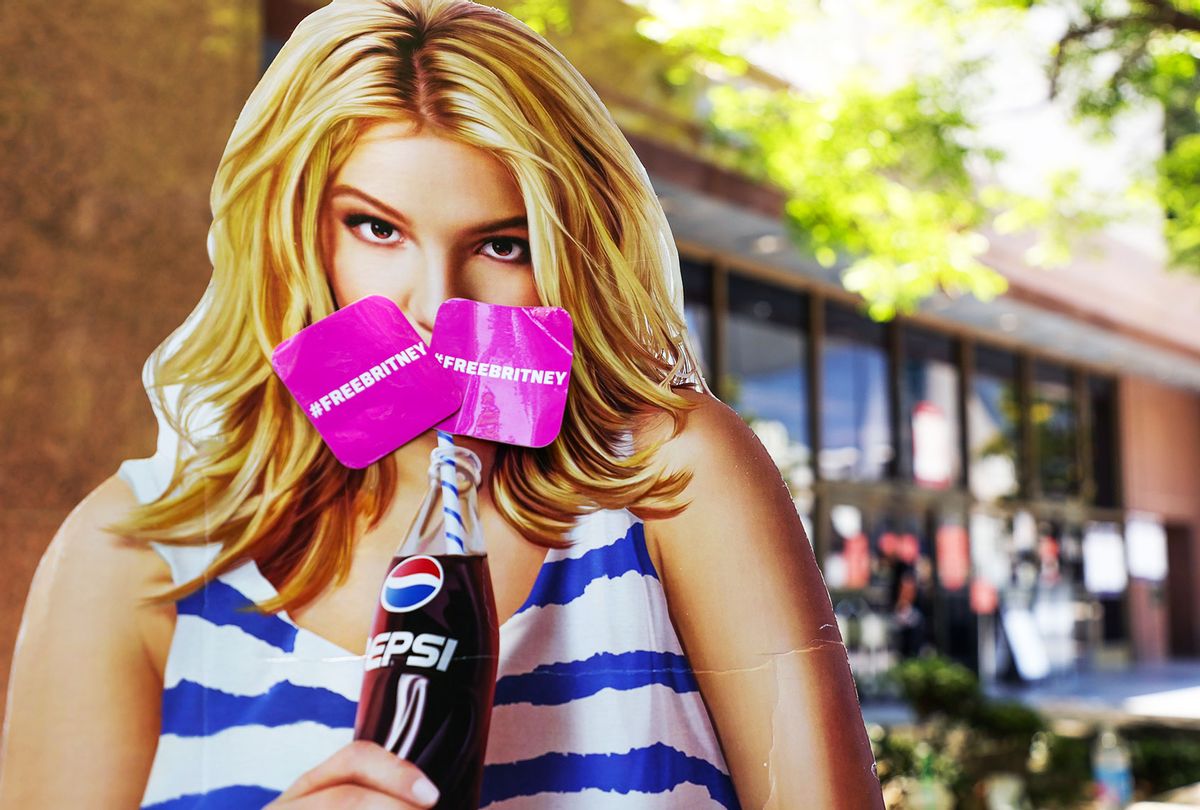 A cardboard cutout depicting Britney Spears is seen during a #FreeBritney protest at Los Angeles Grand Park during a conservatorship hearing for Spears on June 23, 2021 in Los Angeles, California. Spears is expected to address the court remotely. Spears was placed in a conservatorship managed by her father, Jamie Spears, and an attorney, which controls her assets and business dealings, following her involuntary hospitalization for mental care in 2008. (Rich Fury/Getty Images)
--

Two years after pop star Britney Spears' last court appearance, she finally broke her silence in a devastating testimony on her ongoing court-ordered conservatorship before the Los Angeles Superior Court on Wednesday, according to CNN. Spears is currently suing to end the conservatorship, which has been in place since 2008 and has given her father, Jamie Spears, almost full control over Spears' life, career, medical decisions, and fortune.

Conservatorships have traditionally been put in place to protect mentally infirm people who aren't able to advocate for themselves. But many advocates – and a recent documentary "Framing Britney Spears" – have long questioned the ethics of Spears' conservatorship, which has required her to work intensely and with little autonomy for years.

While the numerous, horrifying allegations made by Spears throughout her testimony shocked many, superfans of the artist have long been at the forefront of the #FreeBritney movement, and showed up in big numbers to support Spears in downtown Los Angeles.

Megan Radford, one of the founders of #FreeBritney, told BBC, "Everything she [Spears] said was absolutely heartbreaking and it was actually even worse than I really thought it was."

FreeBritney.net first launched in 2009, shortly after the beginning of the conservatorship. On Wednesday, protesters near the court held signs that read, "Conservatorship = Slavery" and "Free Britney Now," while some particularly dedicated fans even shaved their heads in solidarity with Spears, who famously shaved her head at a particularly difficult time in her life, in 2007.

According to Variety, Spears' testimony contained numerous bombshell allegations, including that, according to Spears, she had been forced to perform and go on tour against her will, and had also been forced to take powerful lithium medication when she wouldn't. Spears also recounted being forced into a rehabilitation program that she says required her to work "seven days a week, no days off." Spears added that "in California, the only similar thing to this is called sex trafficking."

While at the rehab program, Spears says she was given no privacy, and not even given a door for her room. "They watched me change every day — naked – morning, noon and night," she said. "My body – I had no privacy door for my room. I gave eight vials of blood a week."

One of the most alarming revelations from Spears' testimony was her claim that despite how she wants another child, her conservatorship isn't allowing her to remove her IUD, which prevents her from getting pregnant.

"I was told right now in the conservatorship, I'm not able to get married or have a baby," Spears said. "I have an IUD inside of myself right now so I don't get pregnant. I wanted to take the IUD out so I could start trying to have another baby. But this so-called team won't let me go to the doctor to take it out because they don't want me to have . . . any more children."

According to Spears, despite how her social media and other media appearances have presented a facade that she's "OK and happy," this image is "a lie."

Spears also cleared the air about her family situation, and her frustrations with the control her father has exercised over her life for the past 13 years. "I would honestly like to sue my family, to be totally honest with you," she said. "I also would like to be able to share my story with the world, and what they did to me, instead of it being a hush-hush secret to benefit all of them."

In particular, at one point in Spears' testimony, she criticized her father for enjoying the power he held over her. "The control he had over someone as powerful as me — he loved the control to hurt his own daughter 100,000%," she said. "He loved it."

And while Spears petitioned earlier this year for Jodi Montgomery, an experienced conservator and professional care manager, to take over her conservatorship full-time after Montgomery temporarily filled the role in September 2019, on Wednesday, she said that "even Jodi is starting to kind of take it too far with me.

"They have me going to therapy twice a week and a psychiatrist. I've never in the past . . . had to see a therapist more than once a week," Spears said. "It takes too much out of me going to this man I don't know."

In addition to #FreeBritney mega-fans who protested in Los Angeles Wednesday, other celebrities and activists, from Spears' ex-boyfriend Justin Timberlake, to Planned Parenthood President Alexis McGill Johnson, and even Piers Morgan, have expressed support for Spears to be free from the conservatorship.

"We stand in solidarity with Britney and all women who face reproductive coercion," McGill Johnson said in a statement. "Your reproductive health is your own – and no one should make decisions about it for you. Every person should have the ability to make their own decisions about their bodies and exercise bodily autonomy."

The next step in Spears' legal battle for freedom from her conservatorship is an upcoming hearing on July 14.