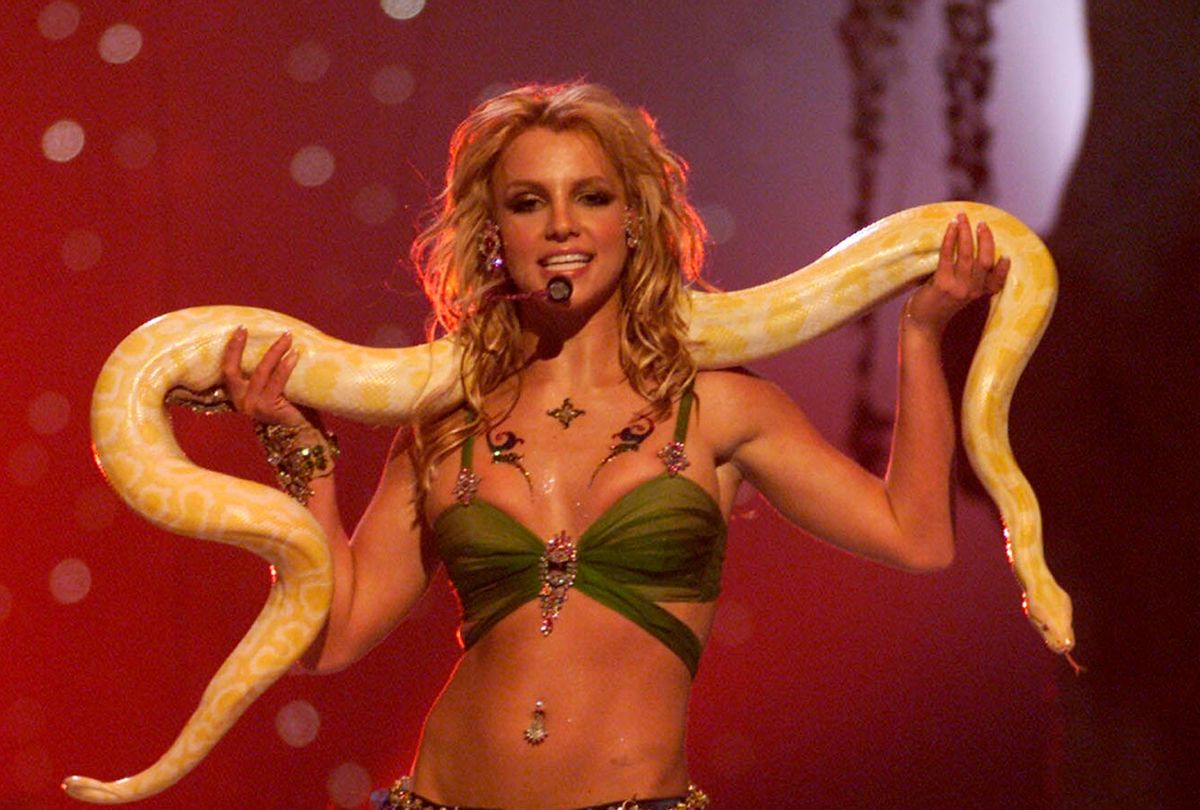 On June 7, Britney Spears shared with her 30.5 million Instagram followers a carousel of photos. In it, the superstar struck a series of poses wearing green snakeskin.

"I held a snake at the @VMAs one time but decided to go ahead 20 years later and become the motherf**king snake myself!!!!" she captioned the post. "And since TRICKS ARE FOR KIDS you tricky little s**ts . . . who knows what color snake I will be tomorrow."

At the time, this was a feel-good millennial throwback post, referencing the iconic "I'm a Slave 4U" performance at the 2001 MTV Video Music Awards ceremony. Like her usual Instagram content, full of quick dance videos, Bible quotes and cute animals paired with exclamation points and platitudes, it seemed innocuous. It wasn't until two weeks later, when Spears addressed a Los Angeles probate judge, that the context became clear. "I'm not here to be anyone's slave," she proclaimed in a prepared 24-minute statement, one of the first times the public has heard her speak in 13 years. After 20 years, the aspirational embodiment of Y2K girlhood was no longer the lucrative performer draped by a symbol of danger and deception. She was the motherf**king snake, tightening her grip on the oppressive conservatorship that has restricted the majority of her adult life with one horrifying revelation after another. Her photos were clever foreshadowing, contrasting the height of her zeitgeist success and power with this pivotal plea clawing out from years of helplessness and loneliness.

She is smarter than pop culture gives her credit for. But for the millennial generation of women that watched her rise and fall and disappearance, we knew that. We felt it in our bones. Her story is an extension of our own.

The New York Times Britney Spears documentary, "Framing Britney Spears," premiered in February 2021, just as an end to the COVID-19 pandemic was taking shape as a reality. The vaccines and a new presidential administration were promising a return to "normal," even though the American normal had failed us in every way. The documentary focused on the conservatorship formed in 2008 to control Spears's career and finances in the wake of a perceived mental health crisis. Over that bleak winter month, creeping into our one-year anniversary of quarantine, the film became the latest must-stream content. Not only did it reignite interest and concern from the public in the unusual case, it forced a reckoning with the late '90s and early aughts celebrity machine. In glaring hindsight Justin Timberlake, Sarah Silverman, and Perez Hilton all issued apologies for the roles they played in discrediting Britney and gleefully celebrating (and profiting from) her downfall.

For all of us old enough to remember staying up late on a school night to watch that famous VMA performance, watching her story brought back a barrage of memories of the era's social conditioning. We were all supposed to want to be her. Out of the lot of us, she'd done it. Reached level Perfect. And yet, it still wasn't good enough. And when she realized this, recoiled and pushed back at the insatiable media torture, she was suddenly considered insane. Watching the most successful, famous, influential performer of our generation cornered into a powerless legal agreement capped off a long year of communal vulnerability.

Women, especially those of color, have had their lives uniquely decimated by the pandemic. According to the Center for American Progress, "Four times as many women as men dropped out of the labor force in September [2020], roughly 865,000 women compared with 216,000 men." The most commonly cited reason for leaving the workplace was child care. The equation of school suddenly going remote, along with daycares closing or vastly reducing operations, left parents with an impossible choice: career, or family. Unsurprisingly, the child care burden fell disproportionately on women.

Women and minorities also made up a majority of essential workers in sectors like retail, hospitality and other service-industry jobs that cannot be performed over Zoom. Many of these functions were exempted from stay-at-home orders, and with the lack of a national mask mandate and the Trump administration's protracted denial and mismanagement of the pandemic, this set up yet another double-bind. Put food on the table and pay the rent, and risk exposure to a deadly and little-understood disease. Large chains like Kroger had a public relations blitz proclaiming their love of essential workers, but pulled their "hero pay" wage increase just two months into the pandemic.

For women unlucky enough to get sick, studies have shown that they are at increased risk of enduring long COVID with symptoms including headaches, breathlessness, coughing, fatigue, and cognitive impairment. This lingering manifestation of the disease compounds women's inability to resume career functions, and puts their livelihoods, and those of their families, in further jeopardy.

One of the most disturbing revelations from Britney's June 23 testimony was the suppression of her reproductive rights:

I would like to progressively move forward and I want to have the real deal, I want to be able to get married and have a baby. I was told right now in the conservatorship, I'm not able to get married or have a baby, I have a (IUD) inside of myself right now so I don't get pregnant. I wanted to take the (IUD) out so I could start trying to have another baby. But this so-called team won't let me go to the doctor to take it out because they don't want me to have children – any more children. So basically, this conservatorship is doing me waaay more harm than good.

In the same year that parenthood became more expensive, more difficult and less supported than ever before, Republican lawmakers spent huge swaths of their energies on restricting abortion services. Near-total bans have been enacted in Arkansas and Oklahoma, while Idaho and Texas have limited access to abortions for fetuses more than six weeks old — even though commercial pregnancy tests cannot reliably predict a pregnancy until four weeks post-fertilization. If the pregnancy is unplanned, it's not likely to be detected until at least a week after a missed period, right when the legal window is closing. With a conservative-stacked Supreme Court, contraception options are poised to shrink even further.

Spears's requests of the court are breathtakingly simple. She wants to set her own work schedule. She wants to own the money she's made. She wants to have autonomy over her body and free rein over her reproductive choices. They are the same things that we all want: to be paid a living wage without working ourselves to death. To fall in love. To decide whether we want kids, and not worry that our livelihoods will suffer because of that choice.

It is not some illicit scam that has trapped Britney Spears and forced her to beg for her freedom. Her situation is formed and supported by California conservatorship law. Although this arrangement is typically reserved for those suffering from illnesses such as dementia, and said to be a "last resort" to protect a vulnerable person's assets, these implied guidelines are not written into the law. Once a court has placed an individual under a conservatorship, the burden falls on the conservatee to prove they no longer need guardianship.

The system is failing Spears by doing its job. Just as the labor and social policies that have made 2020 and 2021 an unsolvable quagmire from which millennial women are unlikely to recover were written with intention, and remain unchanged even after proving a million times over that they are detrimental to the stability of low- and middle-class Americans. In Britney's story is our own, and the truth — that none of us, no matter how smart or talented or beautiful or successful, can evade the traps set by a thriving patriarchy. Seeing our fears, frustration and impotence reflected in this universal idol kindles an empathy and rage two decades in the making. And there aren't enough window-smashing umbrellas in the world to quell it.

Tabitha Blankenbiller is the author of "Eats of Eden," a collection of essays about food, writing, family, sex, coming-of-age, and overcoming personal odds to live your best life. You can follow her on Twitter @tabithablanken.