"If we were heroes last week, why aren't we heroes next week? Nothing has changed." 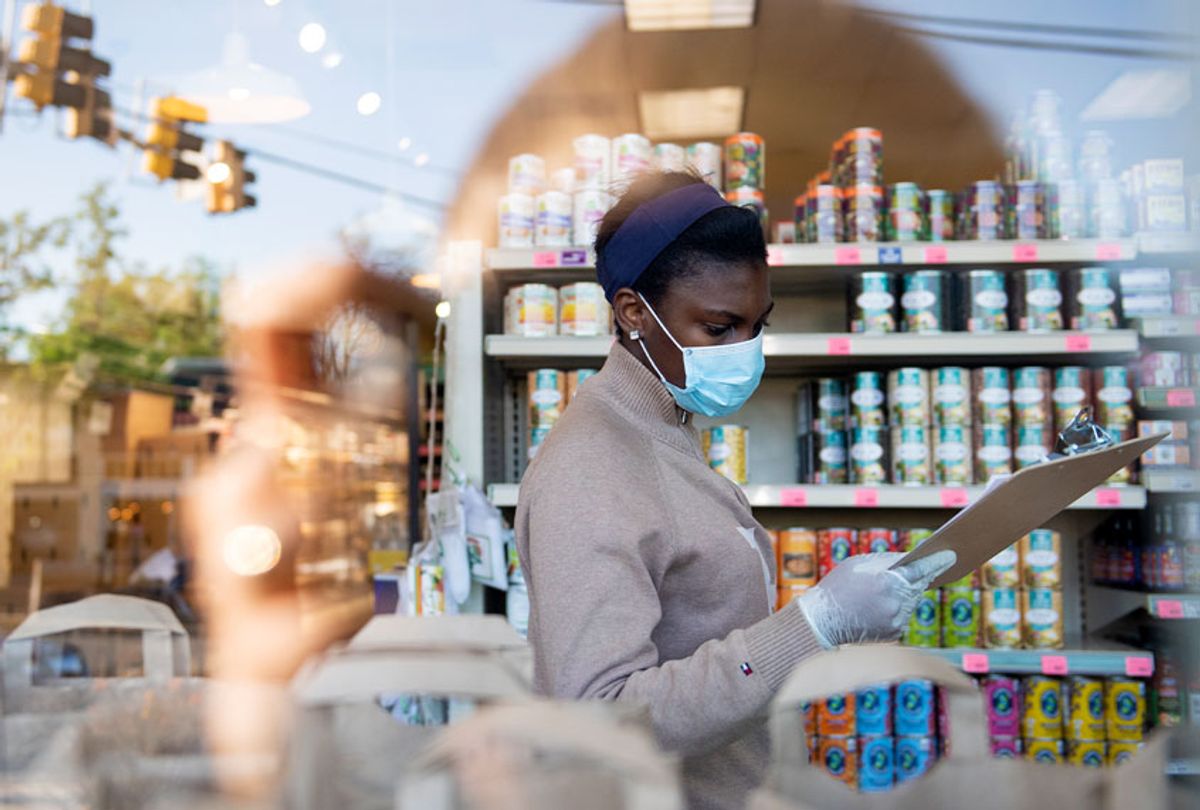 An employee glances at a clipboard as she fulfills grocery orders (Caroline Brehman/CQ-Roll Call, Inc via Getty Images)
--

Shortly after the novel coronavirus was declared a global pandemic by the World Health Organization on March 11, the definition of who could be considered an essential employee began to expand in public discourse beyond medical personnel and healthcare workers to include grocery store employees.

It became clear that these workers are integral to keeping Americans fed, especially after a rash of panic-buying in early March, evidenced by empty shelves and purchasing limits on certain items, illuminated what the country's food system would look like without them. Additionally, due to the customer-facing nature of many of these employees' jobs, they are at heightened risk to come into contact with a carrier of COVID-19. In April, four Michigan Kroger employees who had contracted the novel coronavirus died, and now, a Tennessee Kroger employee has died from coronavirus complications on May 12.

Despite such grim evidence of how much these essential workers have put their lives on the line for their jobs and the public, on Sunday, May 17, the national grocery-store chain will end a $2 per hour hazard pay, which they dubbed a "hero pay" bonus, for workers. This decision has caused many employees, and the union representing them, to push back.

Jonathan Williams is the communications director for the United Food and Commercial Workers (UFCW) Local 400, the union representing Kroger store associates. He says the union is calling on the company to extend the bonus, which was enacted in April, indefinitely until the end of this crisis for all Kroger associates continuing to work.

"As much as Kroger wishes it were so, this is not a normal time and we can't return to normal right now," Williams said. "As some members have pointed out, while we're still being required to wear a mask at work, there is still a hazard. There's still a risk and the dangers are very real. So, if we were 'heroes' last week, why aren't we heroes next week? Nothing has changed."

According to Williams, the UFCW Local 400 has also launched an online petition addressed to Kroger CEO Rodney McMullen and is gathering signatures from Kroger union members in Virginia and West Virginia, as well as stores on the Kentucky, Ohio, and Tennessee borders. As of May 12, the petition had gathered over 2,000 signatures within the 24 hours it had been live online.

"Unlike many other industries, Kroger is thriving, right?" Williams said. "Same store sales are up an astronomical 30% last month."

"So this is not a time where [the cuts to hazard pay] are financially necessitated," he said. "It doesn't make sense on any level, this rush to normalcy."

In an emailed response, Kristal Howard, Kroger's head of corporate communications and media relations, said the company is aware that in the coming month's associates' needs will "continue to evolve and change as our country recovers."

"Our commitment is that we will continue to listen and be responsive, empowering us to make decisions that advance the needs of our associates, customers, communities and business," Howard wrote. "We continuously evaluate employee compensation and benefits packages. Our average hourly wage is $15 and with benefits factored in, like health care, the hourly wage is over $20."

But Williams clarifies that the majority of Kroger employees aren't currently making $15 an hour.

"The majority of people's pay is going to be less than that," he said. "And that's one of the reasons that we, for many years, have pushed for a $15 minimum wage across the board for every worker, including Kroger workers. I was just speaking to a member this morning who has been with the company for nine years and does not make $15 an hour."

In a 2018 article from Dayton Daily News, the chain held an event in late October to hire 400 new associates in the store's Dayton and Cincinnati division. It was reported that clerks had starting minimum wages of $10 an hour. Deli and bakery workers started at $11 per hour, and third-shift workers started at $12 an hour.

Despite the stance on pay, Howard wrote that the company was prepared to continue working with the UFCW to expand their employee protections, including the following: continued implementation of customer capacity limits and special shopping hour for senior shoppers and higher-risk customers; continued plexiglass partitions and physical distancing floor decals; expanding contact-free payment solutions like Scan, Bag, Go and Kroger Pay; and offering a no-contact delivery option, low-contact pickup service and ship-to-home orders.

These safety measures are in line with a suite of new policies UFCW has recommended to protect workers and customers.

This announcement came a day after a Salon reported that as demand for Kroger's curbside delivery option had skyrocketed, some employees said concerns for their own health were at an all-time high, as well.

Kroger employees described navigating crowds — filled with unmasked people who weren't abiding by social distancing recommendations — to fulfill increased orders, which were then taken back to cramped fulfillment rooms.

"It's impossible to keep the social distancing protocol right now, no way we can stand 6 feet apart," Don B., an employee who requested that his full name not be used because he feared losing his job during the pandemic, had said.

When asked in a follow-up conversation about the company's decision to retract the "hero pay" bonus, he said it feels like a "slap in the face."

"The virus isn't going away, but we aren't 'heroes" any longer?'" Don B. said. "If we have to get our temperatures taken and wear masks, then the threat is still there."

However at this point, according to Williams, the onus isn't on Kroger or large grocery chains alone to ensure that workers are compensated fairly and protected in these unprecedented times. One of the measures the union is recommending is that all states declare grocery store workers as "first responders" or emergency employees so they have access to the benefits and protections others in those categories receive, especially access to testing, treatment, and personal protective equipment.

Massachusetts, Minnesota, Michigan, Kentucky and Vermont have already done this, showing they recognize these essential workers on the new frontlines.