Chicken wings with a side of human flesh: A look at the meaty food cravings on “Yellowjackets”

With apologies to the vegans and vegetarians ... 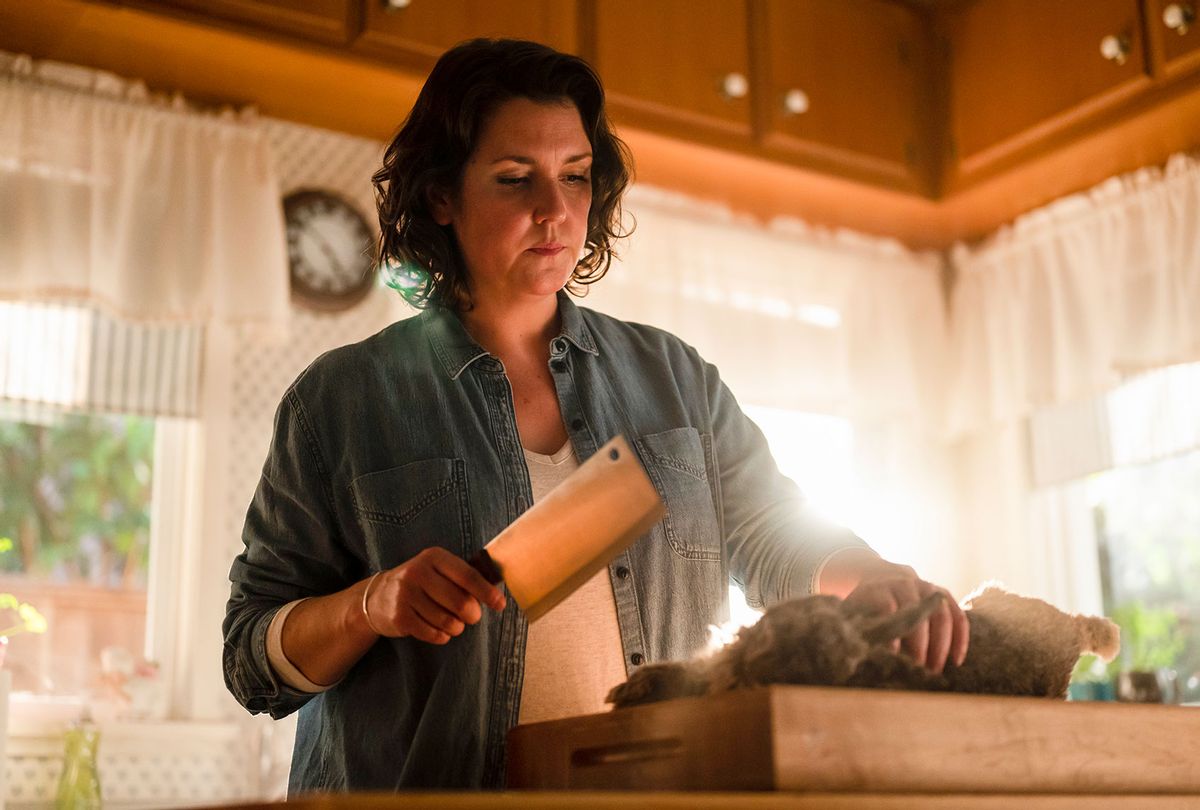 Have you ever seen a human shish-kabobbed from head to toe?

The girls on Showtime's thriller "Yellowjackets" sure have. They've even indulged in the luxuries of devouring fresh human flesh — draining out the blood of their victims before searing the butchered meat on a fire pit. Cannibalism becomes the ultimate way of life for the remaining members of the Yellowjackets girls' soccer team when they live through a harrowing plane crash in 1996. After losing a once-in-a-lifetime opportunity to compete in nationals, they're left to fend for themselves in the forested boonies of Canada. Over the course of 19 months, the team's once prevailing sisterhood soon descends into pure savagery as former teammates are hunted as prey and sustenance.

While consuming one's peers could be rationalized as a desperate, last-ditch effort to stay alive, it's enough to put one off meat afterward. Or so you'd think.

Fast-forward 25 years later, and a few surviving Yellowjackets still crave the taste of meat, undeterred by their traumatic past diet. In fact, for some, there's still the satisfaction in consuming what one has caught and butchered personally. We see this in the second episode, when an adult Shauna (Melanie Lynskey) targets a rabbit from her garden and then skins, guts and minces it before preparing the critter in homemade chili. The sounds of skin ripping against flesh and a cleaver piercing through bone ricochet against the walls of her quaint kitchen.

RELATED: The swarming secrets of "Yellowjackets"

This isn't Shauna's first time slaughtering an animal. After the plane crash, a young Shauna (Sophie Nélisse) painstakingly slits open the throat of a dead deer before cooking it for dinner. Blood oozes out from the animal's neck as its wound grows larger and wider. But Shauna continues her task unfazed — a little too unfazed if you ask us. Just moments before, she had opted out of a team gun practice for hunting, presumably out of squeamishness for killing. But once her pals brought back the deer, she was quick to get her hands on a knife and start slicing.

In the present, Shauna's unsuspecting husband and daughter savor every spoonful of chili and marvel at how goddamn good her new recipe is. "Callie forgot to take the meat out of the freezer, so I killed a rabbit in the garden," Shauna says drily. "Skinned it chin to anus . . ." She's dead serious, but of course her family dismiss what they assume is dark humor because she's "in a mood." They continue relishing in what they believe is beef. But joke's on them. They're actually eating spicy rabbit.

What does this scene actually tell us? Decades later, Shauna's butchery skills still prove sharp and handy. But perhaps, they also came in handy when the team started hunting for a different kind of meat, the two-legged kind. 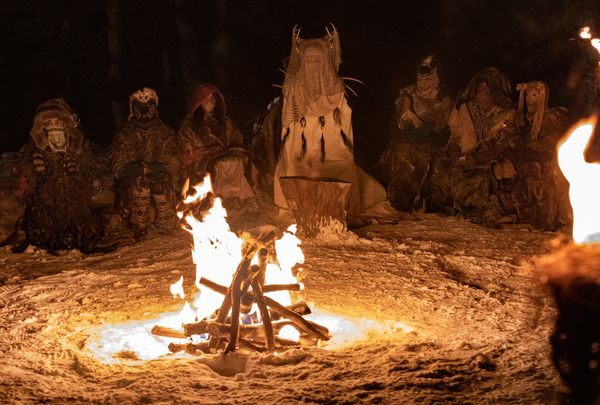 A flashback scene from "Yellowjackets" (Showtime

In the flashback scenes we watch a teammate (unidentified except for a signature heart necklace) fleeing in the snowy forest, falling into a trap and then later being consumed by the others. The resulting dinner tableau is disturbing, almost ritualistic. Everyone's head is covered by some sort of animal fur or pelt or scrap of clothing. While this is no doubt necessary to protect their faces from the harsh winter weather, it also serves to make them anonymous to the viewers, to each other and maybe even from the innocent selves they once knew.

One survivor with a fur mask arrives with the chunks of cooked flesh on a tray, serving one particular teammate who appears to be exalted; they're seated higher than the others and is adorned with an antler headdress, perhaps indicating leadership. But what could this hierarchy mean? Did this person select the victim to be hunted? Are they cold-blooded enough to have devised a society that determines who lives and who becomes barbecue? Just how deep did these teens go into their heart of darkness? This psychological speculation is just one of the many intriguing mysteries in the series.

Meanwhile Shauna's former Yellowjackets companion, Misty (Christina Ricci), also shares a hankering for red meat in adulthood as we see her gnaw on a pack of jerky from a small-town gas station. Then, when she and ex-teammate Natalie (Juliette Lewis) arrive at the abandoned home of a friend, Misty suggests they go out for a spontaneous meal of chicken wings: "We can go back in town, check it out, get some wings, come back later."

Really Misty, chicken wings? If you think about it, consuming chicken wings is pretty darn gnarly. The entire eating experience involves ripping chicken meat off of its bones with your teeth and nibbling on pieces of cartilage.

How can one do this and not be reminded of ripping your teammate's flesh from their bones? How can one know the exact taste, smell and feel of human flesh and still crave meat or even look at it without feeling queasy? And on top of that, how can one live with the knowledge of eating their teammates, friends and lovers and still regard meat as palatable? Beats us. 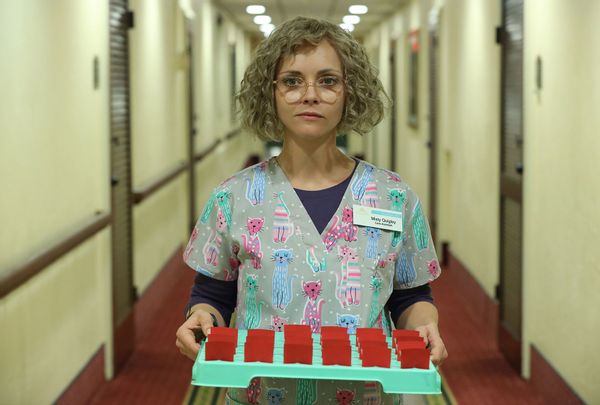 Christina Ricci in "Yellowjackets" (Paul Sarkis/Showtime)It's almost as if Misty misses those wilderness days and yearns to relive them. Maybe gnawing on meat is less about enjoying the actual taste or texture and more about satisfying the sadistic pleasures she left behind in the woods. After all, from the first moment she emerges from the wreckage of the plane, she tackles the most gruesome tasks with an undisguised glee and baffling lack of nausea – from hacking off her soccer coach's leg (to save him of course) to volunteering to butcher the team's kills.

Furthermore, of the masked survivors who consume their teammate's flesh in flashback, we learn that it's Misty who wears the fur pelt mask and serves the antlered leader. After dinner, Misty pulls off the mask, dons her glasses and smiles, satisfied. It's good to be needed. And better yet, others value her for these very skills. Let Misty do the dirty work.

RELATED: "Yellowjackets" is a fantastic, terrifying plummet into the darkness of female rage and desire

No wonder teenage Misty is thrilled about being stranded. She even selfishly goes out of her way to destroy the plane's flight recorder shortly after crashing so that rescuers wouldn't be able to find them quickly. This rather ruthless drive to get her own way and feel needed prevails in her adult years when she tampers with Natalie's car in order to offer to carpool for a forced girls' roadtrip. Also, as an elder care assistant, Misty is only sympathetic to her charges to a point, but withholds painkillers at the first sign of disrespect.

Her deranged enthusiasm, which seesaws between charming and frightening, hinges on being appreciated, no matter what the cost. It's clear that she had no qualms – back as a teen or now as an adult – about eating a cohort as long as it meant that the rest of them accepted her.

That's not necessarily the case with another surviving Yellowjacket, Taissa (Tawny Cypress). She's the only known teammate who has a strong aversion to meat — whether it's ground up into bits or as a whole carcass. During her senate campaign party, Taissa promptly spits out a meat-filled hors d'oeuvre into her napkin once she determines its contents. And the sight of a whole roast pig – displayed proudly snout to tail on an elaborate tray – immediately conjures up memories of the wild-caught venison she once feasted on. Her wife Simone (Rukiye Bernard) catches Taissa's expression and correctly surmises that she didn't eat before the party – a strategy that many people with dietary restrictions resort to in public spaces when they can't control what they're served.

While we never specifically hear the word "vegetarian" uttered by or about her, it's clear that her diet preference is plant-based (or at least animal-free!). In their home, Taissa and Simone prominently display bowls of expensive fruit – such as dragonfruit – in their kitchen. These ladies like their fancy produce. 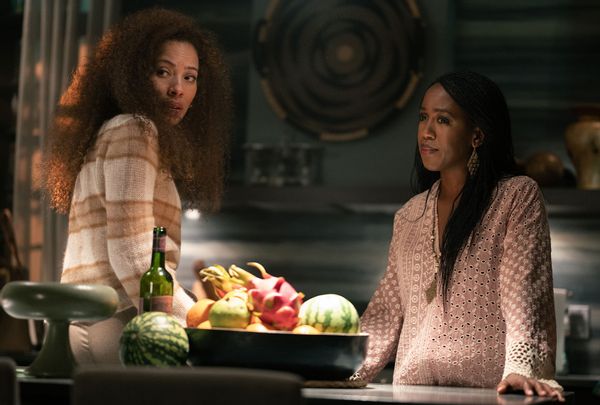 What's curious is that Taissa seems to be hiding her non-carnivorous ways from the public. She could have easily mentioned her dietary needs at the party or even beforehand. It's not unheard of to have vegetarian options at big events, even in New Jersey. Is there not one dinner roll anywhere to sop up pork jus?

But if we're to take our psychological musings further, maybe announcing she's off meat feels like an admission of guilt . . . and cannibalism. Young Taissa apparently survived her ordeal in the wilderness, and that probably means she had to partake of human flesh. But she didn't have to like doing so. Of all the ways to adjust to life after eating your teammates, swearing off meat seems to be the most understandable. But running for public office also comes with a certain set of expectations to fit in and not give any indication that you may have chomped on roasted leg of Mia Hamm once upon a time.

RELATED: An America that eats its young

While resorting to cannibalism is too horrifying for most viewers to conceive of actually partaking in, that's precisely why it's such a fun subject to chew on (so to speak). It's a far-off fantasy that allows us to delve into our dark side, and it's clear that the show knows the visceral power it holds as well.

"Yellowjackets" gets its food scenes right by appealing to the five senses. There's special attention paid to the salivary sounds of young women hungrily eating their roast. There's close-ups on the dribbles of fat that encase the team members' fingers and coat their lips. This is not the pristine presentations of "Chef's Table" or even the ASMR-touting joys of mukbang on TikTok.

It's also a complementary approach to the gorgeous yet cheeky cannibalistic preparations seen on NBC's dear-departed "Hannibal." The darkly humorous thriller glamorized eating human flesh with elaborate spreads and captivating entrees concocted by a deranged gourmand (and in real life designed by none other than acclaimed humanitarian Chef José Andrés). It was mainly a feast for the eyes and for our funnybones.

But here, we're meant to feel like we're right there with the teenagers, consuming flesh with gusto. It's supposed to be gross and disturbing. "Yellowjackets" takes food to the next level and beckons us to also join in on the gory fun. And while we're at it, we can ponder how our diets and psyches would evolve if we were lucky enough to survive such extremes.