The best Sunday night comfort meal is rotisserie chicken chili, especially with a pinch of cinnamon

An ode to rotisserie chicken and "no recipe recipes," with expert advice from New York Times food editor Sam Sifton 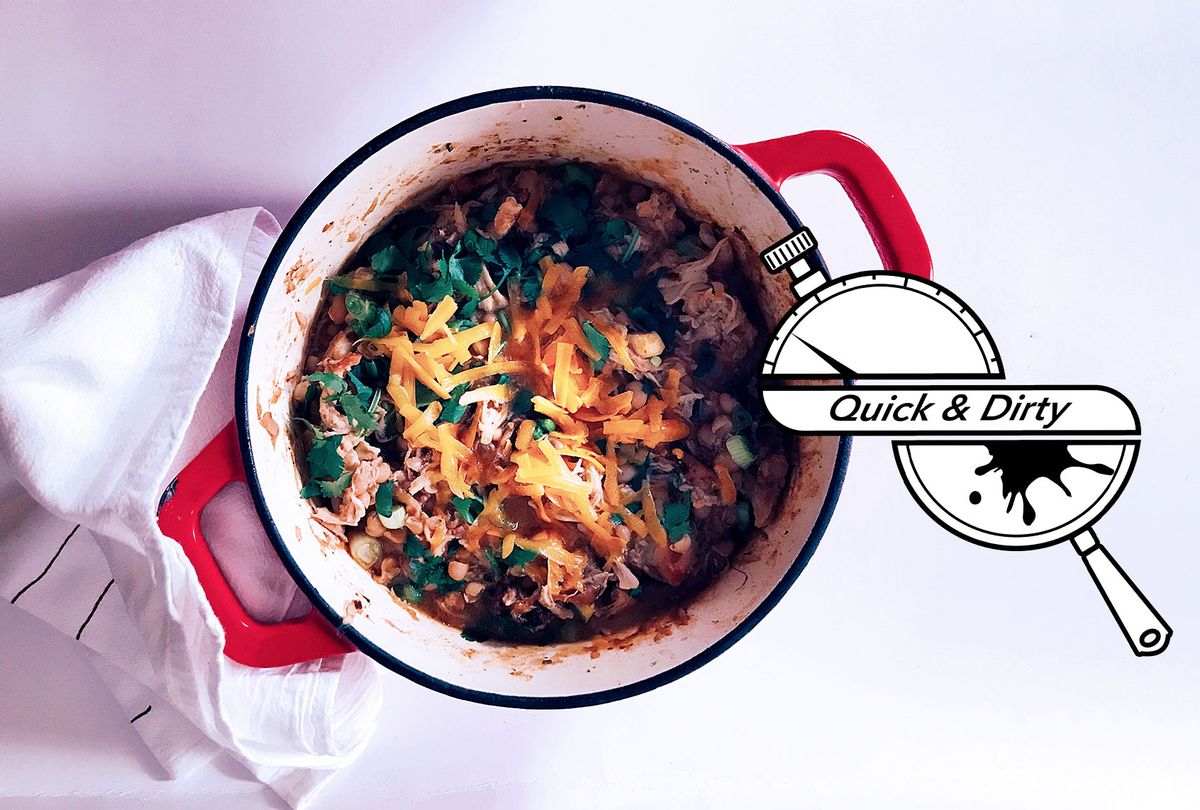 From the title alone, I was all in on Sam Sifton's new book of "The New York Times Cooking No Recipe Recipes." I've been a fan of Sifton's relaxed, flexible and confidence-building approach for ages, and his latest is a treasure trove of unfussy, intensely flavored dishes and desserts for people who truly love to eat.

Yet I'll admit that the book and its bold first line — "You don't need a recipe" — would have seemed an absolutely ludicrous concept for a large portion of my life. Maybe that's true for people who grew up in their family kitchens, standing on chairs, stirring stews and peeling potatoes. I was in my thirties the first time I ate a homemade pie, and I was sincerely flabbergasted to learn that pie didn't come from Drake's.

You probably do need a recipe to make a pie, even if it's a pretty loose one. But getting satisfying food on the table isn't very hard, and it definitely isn't rigid. Above all, the results don't have to bland or boring. Low maintenance doesn't mean compromise, as amply evidenced in Sifton's adjective-dense collection of dishes, which feature words like "buttered," "glazed," "roasted" and "spicy."

"I think," Sifton tells Salon Food during a recent phone call, "this is an argument in favor of more cowbell, always." That's the simplest but often most overlooked advice to make your food taste better. As Emeril would say, just kick it up a notch.

"I've long said the reason that restaurant food tastes better than home-cooked food so often is because they use more butter and salt than you can imagine — and that's true," says Sifton, adding that "I'm talking a lot about big flavors here, but I'm not talking about big portions."

RELATED: Few things taste as good as roast chicken. This is Sam Sifton's secret to cooking a perfect bird at home

As a product of a watery, canned vegetable upbringing myself, I've found this the most revelatory trick I've ever learned. Add another clove of garlic. Add an extra squeeze of lemon. The secret to my unstoppable chocolate chip cookies? I double the amount of chips. Bam!

Sifton's newest work arrives at exactly the moment we home cooks are ready for it. We've done our homework for more than a year, perhaps without even knowing it.

"Because so many of us have spent so much time cooking over the course of the past year, our skills have improved to the point where the barrier to entry to a new 'no recipe recipe,' which is confidence, has been cleared," he says. "People are more confident in their cooking now and understand that they actually can put stuff together on the fly, should they choose to. And it's freeing to do that, both creatively but also physically freeing as well, because you're released from the tyranny of the printed recipe. You're released from the tyranny of the cookbook that demands that you have a precise amount of star anise in this dish or that one."

"It's an argument for looking into your pantry and making of it what you will," he adds. "If you have chicken thighs, I've got plenty of ideas for what you can do with them, and I don't need to give you a proper recipe to do that. I can just give you the prompt, and you'll make something delicious. And that will be your recipe — not mine."

Like Sifton, my recipes frequently involve a rotisserie chicken. You can transform one purchase into so many different meals.

"There's so much that you can do with them both in the moment and later on," he says. "I, of course, have no problem with just plopping that thing on the table and just having at it. [Or] shredding that meat off and using it in tacos and quesadillas. Freestyling a chicken salad for a chicken salad sandwich the next day is sublime, and you can take that chicken salad in any direction you want. It can be a curry chicken salad. You can go old-school waspy, and get some grapes and nuts in there. And then, at the end of the day, you have a carcass that you can turn into stock that you can use in something else."

I came late to rotisserie game, perhaps because I pride myself on my roast chicken. That all changed one particularly hot, stressful summer, when all I wanted for dinner was something that required not heating up our small, stuffy kitchen. Sifton's rotisserie chicken salad and rotisserie chicken panzanella are kindred spirits of the salads I put together in a regular rotation. While the last gasps of winter still bring blustery nights, I turn more to something cozier.

On weekends these days, my spouse stays a few towns over to care for his elderly mother, and my high schooler and I mostly hunker down with our respective school work. On Sunday nights, however, we emerge, bleary-eyed, and spread a picnic blanket on the living floor. We watch dumb YouTube videos together, and we usually eat something out of a bowl. Often, it's chicken chili.

The first time I ever made chicken chili, I read the recipe wrong and added cinnamon instead of cumin. Oddly enough, it somehow worked. Over time, the cumin returned, but I still always add a little cinnamon. Every time I do, I remember that even if I have a recipe right in front of me, I can always go off book.

Inspired by The Pioneer Woman and Cooking Light

Pro-tip: This is delicious with plain old cornbread baked from a box of Jiffy (and it's even better with a handful of corn kernels stirred in to the batter!). If you are committed to vegetables, serve with a salad or add some leafy, wiltable greens like spinach or chard to your chili.