From smartphone apps to confusing websites, vaccine sign-up is anything but simple for the elderly

In many states, the vaccine sign-up process is downright hostile to seniors who aren't internet or phone savvy 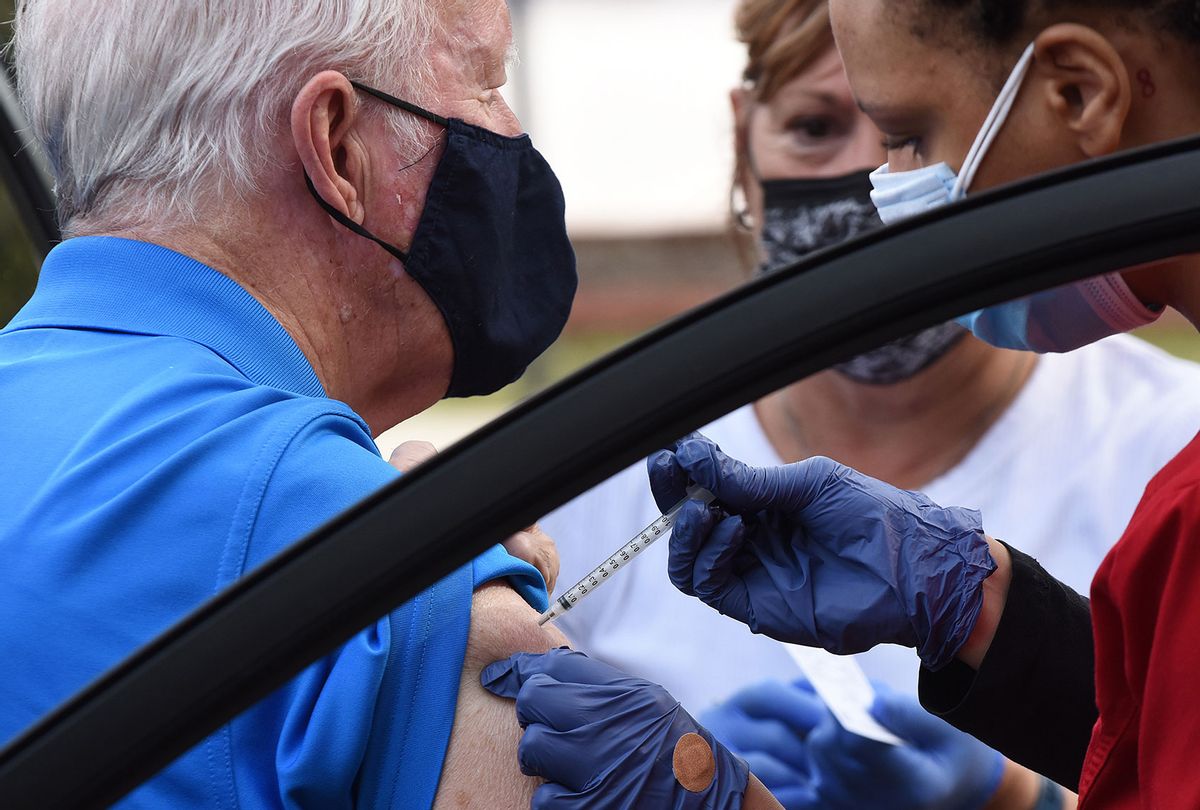 Tony Dix receives his second dose of the Moderna COVID-19 vaccine at a drive-thru vaccination site operated by the Florida Department of Health at St. Patricks Catholic Church on January 26, 2021 in Mount Dora, Florida. More than one million seniors 65 and older have been vaccinated in the state. (Paul Hennessy/NurPhoto via Getty Images))
--

How do 80 year-olds who don't have adult children do it? The scale and the ambition of the COVID-19 vaccine — from its development to its clinical research to its rollout — has been an unprecedented challenge, and in many ways, achievement. It's also a real garbage fire for our parents, a development that's creating newly deputized patient navigators of millions of Americans.

This is not a rant about the ineptitude of production or distribution. This is a rant about communication, and design. This is about, wherever you live or whatever your community's current vaccine plan may be, the multitude of ways in which it almost assuredly does not make a lick of sense to an old person.

There is an adage that translates to "Nothing about us without us." The concept is simple: Don't make or do things for a population without input from that population. So I have to ask, did anybody who created any of the catastrophically useless vaccine signup websites out there ever talk to their grandmas?

My mother's vaccination, unlike anything else about her care, has been straightforward. She is in a facility in New Jersey, the state with the highest nursing home death rate in the nation. When the vaccine was approved, long term care residents in the Garden State simply went to the front of the line. My mom didn't have to figure out how to sign up online, or wait outside in the cold.

My mother-in-law's story, in contrast, has been one of daily exasperation. It began with a terse email from her doctor, punting her to the New York State's vaccine site. Here's what happens when she goes there. A message informs her that "The Am I Eligible app is the quickest way to see if you're eligible and make an appointment."

Like roughly 60% of seniors, my mother in law doesn't own a smartphone. But she can, presumably, fill out the eligibility requirement form and find out where to get an appointment. She can then attempt to make the single available appointment open in her area today, and discover when she tries to confirm it that it's disappeared. Or she could try to book one a five-hour drive away, get sent to a page that reads, "Please Select an Event," and realize she has to scroll all the way down to the bottom of the page to get to a live link.

Our state's site informs her, "Once you have successfully scheduled an appointment, you will receive a confirmation email that contains a barcode," a system she definitely does not understand. If she's like her neighbor couple in her Westchester suburb, she can then go downtown to the vaccine distribution facility and be turned away because they've run out, and start the whole process all over again.

I know all of this because my mother-in-law did not actually do any of these things today. My spouse did, as he does every day. (The New York state vaccine site, at the moment of this writing, bears a message that it's "down for maintenance.") His mother is 88, has the beginnings of dementia, and arthritis that makes standing and walking difficult. But, sure.

My mother-in-law, by the way, has boatloads of privilege. She has a professional caretaker who's with her every weekday. She has a family that can do all of the heavy lifting of slogging through a process being conducted almost entirely via a technology she is deeply uncomfortable with, one that is riddled with bugs, glitches, errors and outdated, incorrect information. She has a group of friends in similar circumstances, who call each other when an appointment, briefly, opens up. It's a desperate, stressful situation. Now imagine adding another layer of obstacles to all of this, like the one my neighbors in upper Manhattan have been facing.

Earlier this month, the state opened up the Fort Washington Armory for New Yorkers over the age of 65 "to fight back against those forces of inequality." It's in Washington Heights, a neighborhood where 69.5% of the population identifies as Hispanic, and has a poverty rate of 18.4%. But as The City reported from the Armory earlier this week, "At the door, most people entering appeared to be white and unfamiliar with the neighborhood…. None of the handful of guides and security guards outside directing people spoke Spanish." After speaking to a dozen people who'd come in for vaccines, the publication found that ten of them were "suburbanites who are either retirees or work from home." Only one, a 69-year-old Spanish-speaking man, said he lives in the neighborhood. (The Armory is now moving to reserve a majority of appointments for local residents, and adding Spanish-speaking staff.)

It's true that not every area is facing as difficult a process. A colleague's elderly aunts recently had a relatively smooth experience of appointment making and vaccine obtaining. But there are myriad problems and frustrations in communities across the country, and a common theme is that seniors with internet proficiency and supportive intermediaries are vastly privileged. An Associated Press story earlier this month notes that "16.5% of U.S. adults 65 and older lack internet access," and that "more than 25% of Black people, about 21% of Hispanic people and over 28% of Native Americans 65 and older have no way to get online."

Even for the fortunate, the process is daunting. On Thursday, Mindy Kaling posted a photo from her journey to Dodger Stadium with her dad and wrote, "We signed up for a slot online and I wanted to keep him company in the car because we thought we might have to wait hours. There's a lot of stress for older Americans about getting the vaccine. Will it be far away from them? Will there be bathrooms? Will they have to wait in the cold? Will the paperwork be confusing? And like most of us adult children of older Americans, their stress becomes our stress because we are worried about our parents since we know how badly the elderly are treated, generally."

The situation is additionally fraught because once a loved one manages to jump through all the hoops and get the vaccine, they have to come back and get the second dose. Which is, in a best case scenario, very well may involve a daughter or son having to assist them in getting to the site and getting home. Somebody who may be also homeschooling their kids right now, or unable to pay for gas because they lost their job. Somebody already in extreme circumstances. And at every turn, everything seems harder than it has to be.

My friend David, who works in the healthcare industry, recently sent me a screenshot of the signup form in his New Jersey town. The questionnaire offers a long list of yes/no questions, most of which require a negative reply — "Do you have a fever? Have you received another COVID-19 vaccine?" The last one, however, requires a yes — "Will you be available for your second dose in 3/4 weeks?" It's easy to see how anyone could reflexively click in the same column down the line, because the form is literally designed to encourage it. And it's easy to see how a person eager for the vaccine and qualified to receive it would unwittingly rule themselves out. This is the kind of negligent design that can truly do harm, especially to a vulnerable older person. It's enraging.

David added, "There was a lot of 'intelligence' built into the website. If you started typing your address, they would try to look it up and figure out your whole address for you. Because the website was getting hammered so much, those pick list type things weren't loading. It would just kind of freeze on the page." It also asked for the applicant's insurer, but offered an incomplete list of possibilities.

It's heartening that plenty of generous, motivated individuals across the nation have been pitching in to help our older Americans, like the California doctor who acquired 500 doses and set up a vaccination station at a Lafayette middle school, or the Facebook groups that have sprung up to match seniors with volunteers willing to help them set up their appointments. And there is the hope every day that we are learning from mistakes made in the frenzy of trying to fix a disaster few of us could have ever comprehended just a year ago.

In the meantime, though, David says that "I think the most any of us can do is handhold. I have taken care of registering personally, I've done two or three neighbors already, and I have a couple more in mind for the next time that there's vaccine available." We love our parents and grandparents and neighbors and friends, and want them to be okay. So we take on the challenging job of getting them vaccinated. So we keep holding their hands. We keep filling out confusing forms and crashing government websites that were clearly not created with their habits or limitations in mind, as if they didn't have any say in the story of a crisis that has so far killed 291,000 Americans over the age of 65, and climbing. And we keeping hoping somehow they won't be counted among them.