From kimchi, to turkey subs to caramel corn — get creative with all those extra condiment packets lying around 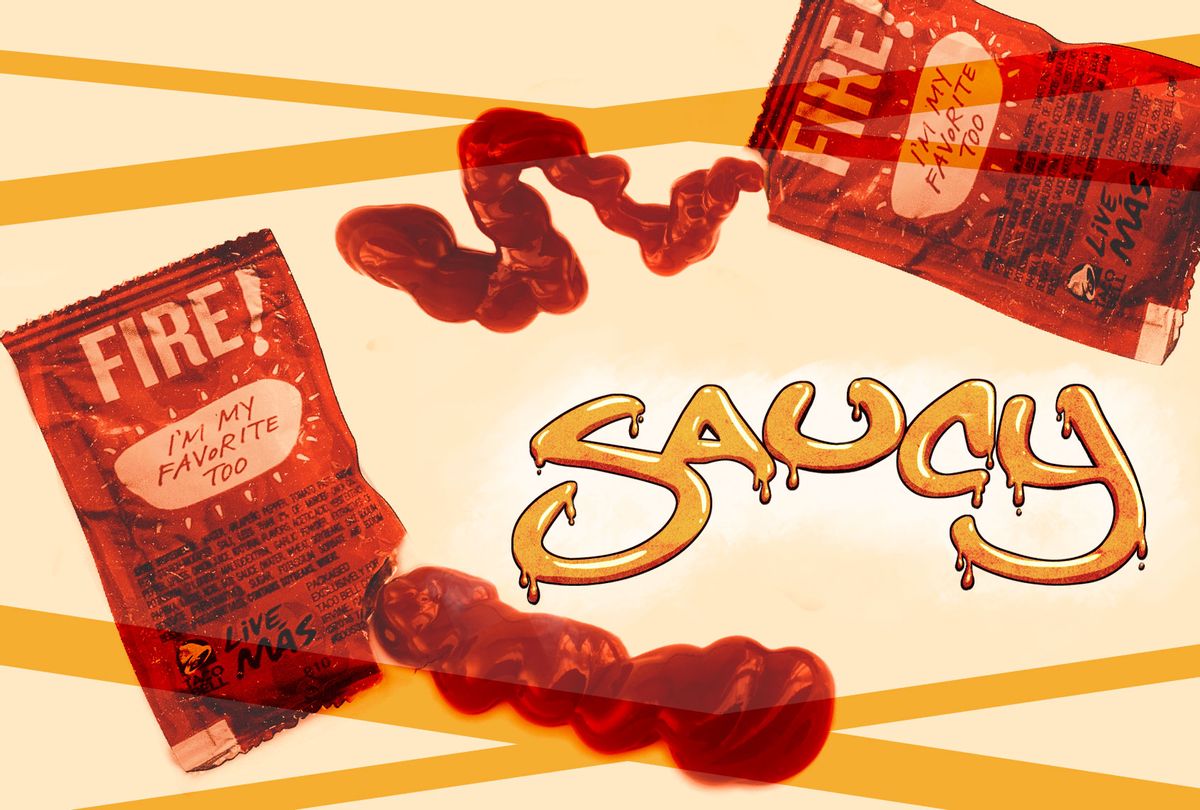 What is Taco Bell Fire Sauce?

Fire Sauce is one of Taco Bell's five sauces. It is made with jalapeño peppers, tomato puree, chili pepper and onions.

In March 2019, 36-year-old Jeremy Taylor and his dog, Ally, were rescued by the Deschutes County Sheriff's Office after being trapped for five days in a car on a snowy Oregon back road. Taylor told police that he had survived the ordeal by occasionally turning on the vehicle for heat and breaking into his glove box ration of Taco Bell hot sauce.

Several hours after returning home, Taylor made a Facebook post sharing the news that he was safe. "Taco Bell fire sauce saves lives," he wrote.

Bizarro survival stories tend to be a staple of cable news; it seems every week there's a new headline like "Man Stranded in Desert Survives on Beer, Crackers and His Own Urine." But this particular story has lived rent-free in my head for almost exactly two years, largely because it speaks to a nearly universal, if under-discussed, truth: the existence of the emergency condiment stash.

Maybe it's in your glove box or center console. Perhaps you have a condiment drawer, which is likely also stuffed with flimsy paper carry-out menus and unused plastic utensils. Some people hoard condiments, some casually collect and others still end up with extra by happenstance. Whatever the case, most folks have a location where they squirrel away vibrant packets of fast-food and takeout sauces — and Taco Bell Fire Sauce is a consistent staple.

Ingredients-wise, Fire Sauce, which was released by Taco Bell in the early 2000s, isn't wildly different from many other hot sauces on the market. It has a Scoville heat rating of 500, which makes it hotter than Louisiana Hot Sauce (450 SHU) but more tame than Cholula (1,000 SHU). Per the packet, it contains: water, tomato paste, jalapeño, vinegar, salt, chili pepper, dehydrated onion, sugar, modified food starch, onion juice, spices, chili seeds, soy sauce, some additives and "natural flavors."

And the biggest anomaly on that list? It's actually the tomato paste. If you take a look at the ingredients of some of the most common grocery store hot sauces like Valentina, Texas Pete, Tabasco, Crystal or Cholula, they rely on peppers and often vinegar to make up the bulk of the heat and flavor. No tomato paste in sight.

This probably lands Fire Sauce more soundly in taco sauce territory. For example, the cult-favorite taco sauce from California's Taco Lita is made with water, tomato paste, distilled vinegar, corn syrup, spices, preservatives (and a touch of cocoa powder!). Commercial brands like Ortega and Pace have a similar make-up.

It seems like a small distinction, but it's one of the reasons that there are numerous Reddit threads full of people who have failed to find a Fire Sauce stand-in in the hot sauce section of the supermarket. That little bit of tomato paste goes a long way. It's also one of the reasons that Fire Sauce has earned an esteemed spot in fans' condiment stashes. For many, it's much more than just as an at-home or on-the-go burrito and taco topping.

How should I use Fire Sauce at home?

Andrew McCabe, the Louisville-based chef of the bar Vetti, describes himself as a "kind of a purist when it comes to condiments." Frank's Red Hot goes on American diner staples. Valentina or Cholula go on Mexican and Tex-Mex. Sriracha, sambal and chili crisp go on Vietnamese, Chinese and other Asian-inspired food. "Taco Bell sauces are saved for the next time I go to Taco Bell, and I might need some more sauce," McCabe says. "The one exception to this was the time my friend Joe and I made black kimchi."

What's in black kimchi? Per McCabe, the base has eggplant and an assortment of 20 or so ingredients, most of which are black like squid ink, black sesame paste and black garlic. But the most important ingredient is a ton of packets of Taco Bell sauce.

"I brought some black metal records over to listen to while we were making it," he says. "We probably drank some black beers. It was a whole thing."

After I put out a call on social media for Fire Sauce hoarders, a couple of respondents posted links to Claire Lower's "Taco Bell Salt" recipe. It's made by saturating kosher salt with a half dozen or so Fire Sauce packets, baking the mixture on low heat for about two hours and then giving it a whirl in the blender.

Others said they go the resale or care package route. Packets sell for decent money outside of the U.S. on eBay, and I remember how the mom of my childhood friend would send boxes of jarred peanut butter and Fire Sauce packets overseas when said friend was studying abroad in Estonia.

Christian, a woman with whom I crossed paths in a local runner's group several years ago, told me that she uses extra packets to spice up plain turkey subs. In the style of Jeremy Taylor, another friend, Aaron, added this: "I will admit that if I get hungry and I don't want to get something to eat I will open a packet and eat it. I know it sounds gross, but I like them."

Someone else chimed in, saying that Fire Sauce is an underrated popcorn topping. "Yes, you people yelling 'SOGGY THO,' underrated," they said. That idea absolutely captured my attention. After consulting a few recipes — specifically Bon Appetit's 2015 recipe for Buffalo Wing Popcorn — I set out to make a sweet and spicy Fire Sauce Kettle Corn. Finished in the oven, there's no sogginess — only the right amount of stickiness.

1. Line a rimmed baking sheet with parchment paper, and lightly coat it with nonstick spray. Pre-heat your oven to 300 degrees.

2. Add brown sugar and 1/4 cup of water to a medium saucepan and bring to a boil, stirring until the sugar is dissolved. Boil, swirling pan occasionally, until caramel is a deep amber color, 10 to 12 minutes.

3. Remove from heat; stir in the Fire Sauce and butter, and return to a boil for an additional 3 minutes. Remove from heat, and stir in salt, baking soda and paprika. Working quickly, pour caramel mixture over popcorn and toss to coat.

4. Spread out popcorn on the prepared baking sheet and bake for 15 to 20 minutes, tossing once midway through, until dry. Remove from the oven and enjoy.

A note on condiment drawer organization

There's something kind of endearing about the chaos inherent to a condiment stash; you toss packets in and just shut the drawer behind you until it's time to rifle through for a fix. But if you're looking to streamline things a bit, the best advice I can give you is to simply purchase a thin utensil tray.

The slots are exactly the right width to store sauce packets vertically, and you can organize — alphabetically, by color, by heat-level, by restaurant — to your heart's content.