How ketchup, an invention of imperial China, eventually became a polarizing American staple 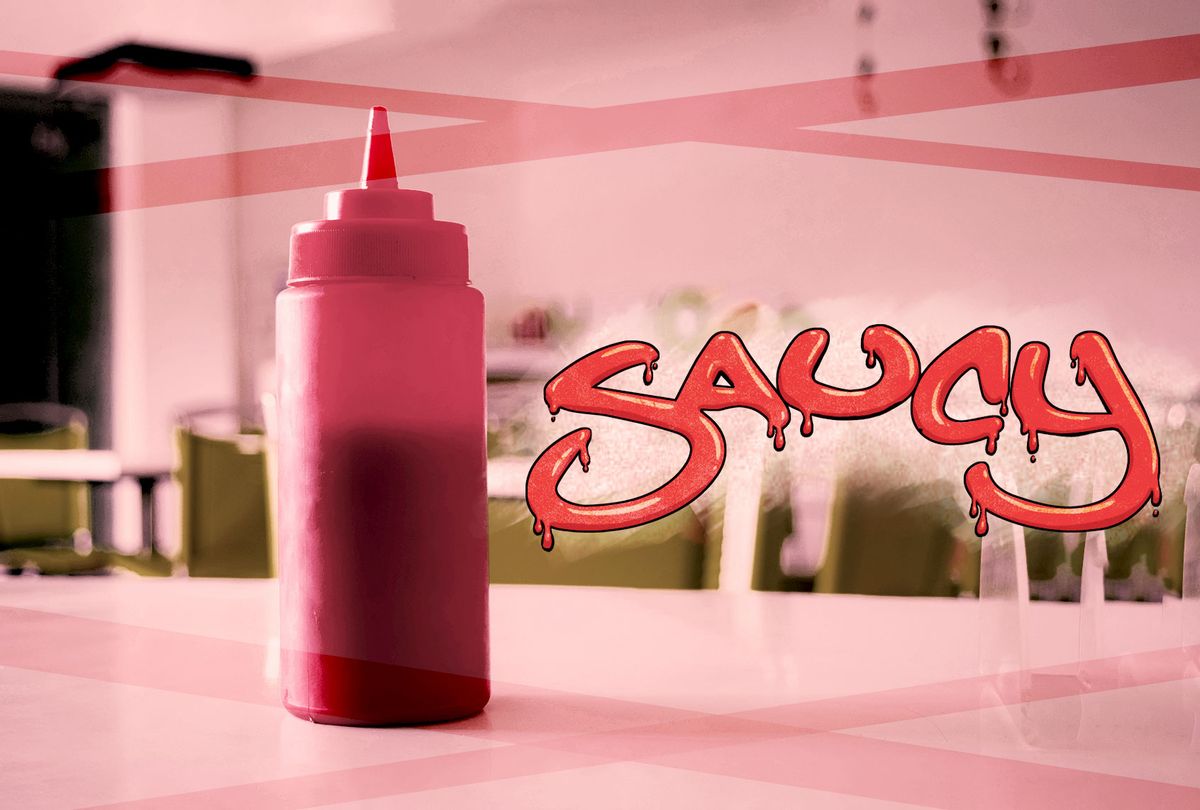 It's a smooth sauce now typically made in the U.S. with pureed tomatoes and vinegar. Historic variations have included chestnuts, fish, mushrooms, oysters and stone fruit.

How ketchup, an invention of imperial China, eventually became a polarizing American staple

Once you scroll past the first few rows of cheerful apple pies and almost incandescently orange Buffalo wings, you'll end up in an endless loop of hamburgers, french fries and hot dogs punctuated by occasional images of chicken tenders and slabs of meatloaf. These are the stars of the photos, but inevitably, there's some supporting talent in the form of a little red pool or drizzle of ketchup.

Tomato ketchup is a 19th century American invention, the union of, as Malcolm Gladwell described it for The New Yorker in 2004, "the English tradition of fruit and vegetable sauces and the growing American infatuation with the tomato." Bottles of ketchup are now standard on many tables — from burger and breakfast joints to some steakhouses. (Former President Donald Trump is known to have visited only one restaurant during his time in the White House: BLT Prime by David Burke at the Trump International Hotel, where he ordered a well-done steak and a side of ketchup.)

It's enmeshed enough in the fabric of American dining that it's the subject of multiple "Seinfeld" riffs. "Do you have a ketchup secret?" Elaine (Julia Louis-Dreyfus) coos to Russell Dalryple (Bob Balaban) in the show's fourth season. The following season, George (Jason Alexander) informs his parents after they criticize the amount of ketchup he's using that "this is my ketchup. I bought this ketchup just so I could have as much as I want."

To that end, overuse is a common complaint surrounding the condiment, enough so that the Facebook group "Ketchup is a Garbage Condiment" — which was created with a satirical mission centered partially on exposing "over use of ketchup we see on our feeds" — has almost 13,000 members. Contained within are entire folders of photos of ketchup used in increasingly unorthodox places: on macaroni and cheese, as a "dip" for Cheez-Its or smeared on croissants. A recent post shows a kid's breakfast plate that's more ketchup than scrambled eggs. Most comments are a variation on the joke, "This one's broken. Toss the whole kid, and make a new one."

Like many condiments, ketchup is polarizing — check out Saucy's column on ranch for another feature on a divisive dip — but if you look beyond the bottle, there's a lot to be learned about the food science behind what makes something cravable or palatable, as well as the static nature of certain condiments like ketchup.

A little history first: While tomato ketchup is deeply ingrained enough in American cuisine that it's present in 97% of American refrigerators, its roots trace back to imperial China, where sailors popularized a fermented paste made from fish and soy beans called "ge-thcup" or "koe-cheup," because it was easy to store on long voyages.

As their trade routes widened, so did the knowledge of the sauce, until it finally landed in Britain in the 18th century by way of British traders who were posted up in the Philippines, where banana ketchup is still a staple. (Keep an eye out for our deep dive into that soon.) There, British home cooks made variations on the paste featuring celery, mushrooms, nuts, oysters and stone fruit. The end results differed wildly, but the goal was the same — to create a flavorful, pungent sauce that could keep for a long time and augment meals at a time when household spices were still a luxury and to help stretch less than choice cuts of meat, especially if they were on the verge of going bad.

In 1812, James Mease, a Philadelphia scientist, was credited with creating the first ketchup from "love apples," a term given to tomatoes for their then-purported aphrodisiac qualities. Heinz ketchup came along in 1876, which contained tomatoes, brown sugar, salt, spices and distilled vinegar, a key ingredient that helped prevent tomatoes from decomposing as quickly.

That recipe was mimicked by home cooks, as well. Remember the opening scene of "Meet Me in St. Louis," where Katie and Ms. Smith argued over whether the ketchup was too sugary? For both, the end result was sweet, a little bitter, salty, savory and sour. Or, the five fundamental, primal tastes in the human palate.

That savory flavor, also described as umami, is inherent to tomatoes and some historic ketchup ingredients, such as fish, mushrooms, oysters and nuts. And it's a subtle component, but one that enhances the flavors around it, according to Tom Gibson, a flavor scientist with the Louisville-based food and beverage consulting firm Flavorman.

"In layman's terms, umami is typically associated with savory flavors, such as beef, chicken and pork," Gibson said. "But most people don't stop and think, 'Wow! What a great umami on this apple!' In the world of a flavorist, umami is used in a slightly different context."

To put it in simple terms, Gibson said, flavorists look at umami as an "effect" flavor, because certain molecules that create an umami experience can render an effect on overall taste. For example, where esters are often "fruity" and hexyl compounds are often "green," umami is not "fruity" or "green." Instead, it can serve to lift or alter the way someone perceives those types of flavor notes.

"Unami creates a Miraculin effect, where flavors usually perceived in one way may be experienced differently, sometimes even opposingly to their original state," Gibson said. "Although it can be challenging to work with in some flavor combinations, unami can function to mask off-notes, reduce bitterness and enhance sweetness in a variety of food and beverage products."

So why are we so drawn to umami flavors? Well, Gibson said, because they help enhance the profile of a variety of other flavors we enjoy in a dish or beverage. "Unami provides depth and creates harmony by — as the Japanese translation suggests — contributing 'deliciousness," he said.

And, as Malcolm Gladwell put it, "What Heinz had done was come up with a condiment that pushed all five of these primal buttons. The taste of Heinz's ketchup began at the tip of the tongue, where our receptors for sweet and salty first appear, moved along the sides, where sour notes seem the strongest, then hit the back of the tongue, for umami and bitter, in one long crescendo. How many things in the supermarket run the sensory spectrum like this?"

Despite being a condiment that engages all parts of the human palate, ubiquity can breed boredom. "Seinfeld" again addressed this in 1992. "Salsa is now the number one condiment in America," George told Jerry, who responded, "You know why? Because people like to say 'salsa.' 'Excuse me, do you have any salsa? We need more salsa. Where's the salsa? No salsa?'"

There are nuances to George's assertion. As Robin Teets, a spokesperson for Heinz North America, told SFGate, while salsa may have taken the top spot in dollars earned, "by volume, ketchup was always the leader." Salsa, he explained, has different "host foods" (i.e. not hot dogs) and is more expensive, so it naturally gained on ketchup in dollar amount.

But the point remains the same — at a certain point, for some, ketchup lost its love-apple luster. This plays out in current market data: Ketchup's profits have stayed pretty flat for the last five years, as cult condiments like sriracha and endless variations of age-old standards — avocado oil mayonnaise, garlic mayonnaise, chipotle mayonnaise, Kewpie mayonnaise — now line the grocery store shelves.

Mike Richardson, a food industry analyst at the Freedonia Group, told Marketplace in 2019 that storied brands like Heinz and Hunt's are continuing to try their hand at more adventurous adaptations of basic ketchup. There's Kranch (ketchup and ranch), Mayochup (mayonnaise and ketchup) and Hot and Spicy (ketchup with a hint of Tabasco). Unlike the Heinz green EZ Squirt — which was released in support of the first "Shrek" movie and remains forever seared into the brains of '90s kids —these aren't intended to be limited-edition flavors. They're a play at trying to direct market dollars back to the ketchup section of the condiment aisle.

"The development of some of these new variations of ketchup, whether it's with different ingredient formulations or more exotic flavor profiles, has been an effort to retain the customer base for ketchup that might otherwise have gone in search of something more exciting," he said.

That's not to say, however, that there aren't gourmet or artisan ketchups. My local specialty market has a truffle ketchup that offers a tasty, if a little cloying, play on truffle fries when drizzled over some shoestring potatoes. I've bought and enjoyed 'Chups' selection of fruit ketchups, which with their cherry and mango flavors, are a nice nod to the stone fruit-based ketchups of yore. I've also had a tamarind ketchup, served with lamb fritters, that absolutely blew me away.

In the war between the "Ketchup is a Garbage Condiment" and "I Put Ketchup on my Ketchup" crowds, I consider myself a neutral party. I have a couple of hard limits — as a Chicago native, ketchup doesn't have a place on my hot dogs, and I'm likely never going to toss it on croissants or pasta — but I see its inherent value in the home cook's arsenal, especially when you get some of the good stuff that's more tomato than corn syrup.

As star chef Jose Andrés told the New York Times upon the opening of America Eats Tavern — his 2011 pop-up restaurant, which had a separate menu of eight traditional ketchups made from local and foraged ingredients — "It is time to embrace and celebrate ketchup, not be ashamed of it."

How should I use ketchup at home?

Beyond the basics, good ketchup can serve as a shortcut to more flavorful sauces — again, since it hits all parts of the palate — especially if you're pulling out some of the cooler fruit and mushroom-based varieties on the market. Think quick barbecue sauces, marinades and dips. Remember the inaugural "Saucy" column about mumbo/mambo sauce? For the homemade recipe, you could absolutely ditch the tomato paste, reduce the pineapple juice a few tablespoons and sub in 8 ounces of ketchup.

But one of the more classic ways to use ketchup is as an ingredient in "secret sauce," which is essentially Thousand Island dressing spiked with some acid. Slather it on burgers, club sandwiches and wraps. I'm partial to it on any number of fried things: pickles, onion rings and mushrooms.

1. Combine all ingredients in a bowl, and mix until fully incorporated.

Making ketchup at home is a fun project recipe. For something that's a little different than your basic Heinz knock-off, check out the recipe from Mary Karlin's cookbook, "Mastering Fermentation." As the title suggests, this version is fermented — a nod to ketchup's ancient roots. In her review of the recipe for Serious Eats in 2013, Kate Williams wrote, "It's a simple mixture of tomato paste, salt, Worcestershire (if you're really ballsy, you could make your own), raw honey and a starter culture, and it only needs a couple of days to get all bacteria-fied."

Here's the recipe if you want to give it a whirl.