The story of ranch, the "Cool American" condiment that has divided a nation (and taken over Etsy)

For every person who thinks ranch is pasé, there's someone else who has a Hidden Valley Ranch tattoo 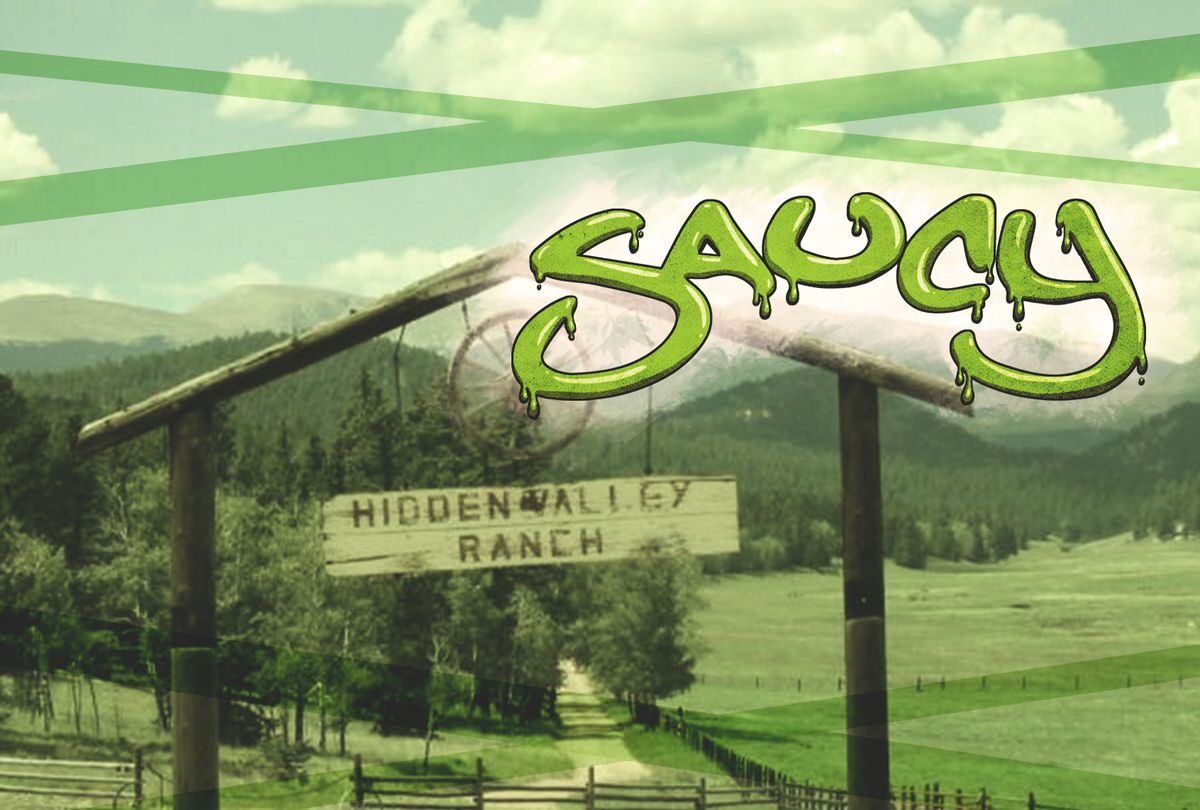 What is ranch dressing?

Ranch dressing is a salad dressing and dip usually made from buttermilk, salt, garlic powder, onion powder, mustard, herbs, and spices. This mixture is then typically combined with mayonnaise.

In the third season of "Man Seeking Woman," the FXX surrealist romantic comedy, Josh Greenberg (Jay Baruchel) prepares to take his girlfriend of several months, Lucy (Katie Findlay), to meet his mom and stepfather. Before making the trip out to the Chicago suburbs, the couple stops over to see Jay's sister, Liz, who, with the enthusiasm of a seasoned anthropologist, explains her parents' mannerisms — from their penchant for clipping out random articles from outdated newspapers to displaying copious holiday-themed decorative towels in the bathroom.

Liz holds out a spoon of something for Lucy to taste. "It's called 'ranch dressing,'" she explains.

Lucy complies and immediately recoils. "I did not like that," she says. "It's very thick."

"You just have to pretend," Liz counters. "Ranch is central to Mom and Tom's diet. To them, it's like liquid gold."

This episode, which was appropriately titled "Ranch" and aired in 2017, encapsulates a surprisingly prevalent opinion about the dressing-turned-multipurpose condiment: that it's a pasé and kind of cringey thing to order or have on-hand (sort of the culinary parallel to "Life is Good" sweatshirts and wooden "Live, Laugh, Love" kitchen signs). This is only further illustrated by ranch's frequent appearances on meme sites like Middle Class Fancy. 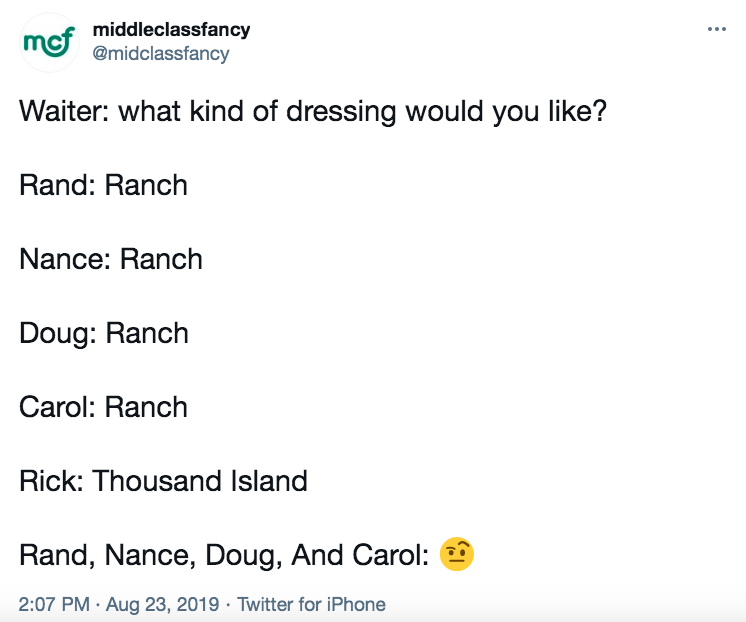 And, like anything that has come to serve as an emblem of middling suburban tastes, ranch dressing has garnered some impassioned detractors who voice their opinions in articles like "Ranch dressing is what's wrong with America" — wherein The Washington Post's Ben Adler writes that "fancy restaurants need to stop experimenting with this revolting milk-rot" — and Delish's "7 Reasons You Should Never Eat Ranch Dressing." In it, contributor Maya McDowell summarizes her feelings by writing, "Keep your processed AF, globby dressing away from me."

Ranch: Great or gross? Tell us in the comments below!

Now, it should be said that here at Saucy, we hate no condiments (borrowing and bastardizing a phrase from the New Testament, "Let all the sauces and dips come to me"). As a '90s baby born in the Chicago suburbs, I have vivid memories of when ranch was king of both the snack aisle and the salad bar.

And for many Americans, ranch still reigns supreme. According to a 2017 study done by the industry group the Association for Dressings and Sauces, 40% of Americans say ranch is their favorite dressing. Italian dressing comes in second, with a comparatively meager 10% citing it as their dressing of choice. For some, it's superseded mere condiment status, as evidenced by the emergence of multiple crocheted Hidden Valley Ranch bottle pillows on Etsy and a shocking amount of ranch dressing tattoos. With that in mind, let's dive into the Great Ranch Divide ™. 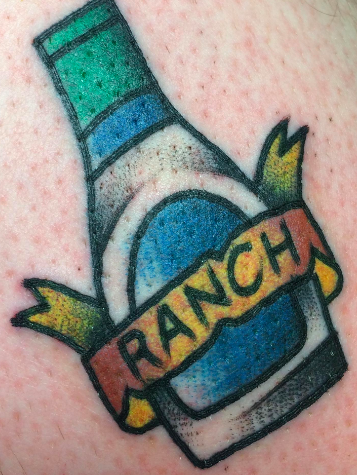 Ranch dressing was originally created by plumber and construction worker Steve Henson, who came up with the dressing while working in the Alaskan bush in the 1950s. Since perishable ingredients — like fresh herbs and garlic — were difficult to acquire in that part of the country, Henson experimented with dry seasonings like garlic and onion powder, dried herbs and powdered pepper. They could be added to mayonnaise and buttermilk for an herbaceous and tangy dressing.

In 1954, Henson and his wife, Gayle, opened the actual Hidden Valley Ranch, a dude ranch in San Marcos Pass in Santa Barbara County, Calif., where they hosted guests and eventually opened a steakhouse. Henson's ranch dressing, packaged in mayonnaise jars, soon became popular souvenirs for guests. Within a few years, the couple began packaging the dry seasoning mix in envelopes, which could be shipped cross-country to customers who could then add their own buttermilk and mayonnaise at home.

By 1983, shelf-stable ranch arrived on supermarket shelves across the country. Cool Ranch Doritos followed a few years later, signaling to snack companies that the tangy, allium-heavy bite of the dressing was a welcome addition to foods beyond salads. The global marketing of the chips also cemented ranch as a uniquely American dressing — in countries other than the U.S., Cool Ranch Doritos are known as "Cool American."

Thus, it's perhaps unsurprising that ranch eventually found a kind of spiritual home in the Midwest. It became a dip for vegetable sticks and chicken wings, a dry seasoning for Chex Mix and "fire crackers," and perhaps most contentiously, an accompaniment to pizza.

It's one of those pairings that feels like a real stoner creation, and I say this with affection and without judgement. As Max Balliet — the owner of my favorite local pizza place, Pizza Lupo — once texted me, "It's sacrilegious in serious pizza circles."

"If you need ranch with your pizza, you should really think about why the pizza isn't enough," he wrote when I asked him about his personal views on the combination. "That said, I don't think there's anything wrong with using it, so long as you understand it doesn't need it . . . Or if it does need it, maybe find better pizza."

"That being said, I don't mind offering it (homemade), because it makes people happy," he continued. "It helps us not take things too seriously (even though I obsess over pizza personally), and I'd be a liar if I said I'd never indulged."

Jason Goldstein, the recipe developer for Chop Happy, is soundly in the pro-ranch on pizza camp. "I love ranch dressing on pizza, because its sweet and tangy goes amazing with spicy, cheesy pepperoni pizza," he wrote via email. "Also because dipping anything is fun."

Meanwhile, chef Franklin Becker of Benny Casanova's in Philadelphia, has more mixed feelings. "For me, ranch dressing is delicious," he said. "But unless it's a Buffalo chicken pizza, I don't think it belongs."

I think this is actually a decent encapsulation of some of unfavorable contemporary reactions to ranch — at least the ones that aren't solely taste-based. Ranch started popping up in places where perhaps it didn't traditionally "belong" — take a look at Twisted Ranch in St. Louis with its "33 proprietary ranch flavors." And when something is ubiquitous, there's bound to be pushback — the view that something popular is also representative of the lowest-common cultural denominator.

But there are a lot of chefs across the country who have recognized that the building blocks of ranch dressing — the cream, the acid, the spice and the umami — are also the same elements that make an ideal condiment. (I wrote about this late last year when I detailed my love for snack plates as an anecdote for kitchen burnout).

As such, there are now cute little bespoke jars of ranch infused with millennial-friendly ingredients like black truffle and extra dill lining the shelves of the supermarket. But if the plethora of Hidden Valley-themed jewelry and accessories on Etsy are an indication, many people are just as enthusiastic about the original as Steve Henson's customers.

How should I use ranch dressing at home?

As discussed, ranch dressing is as multi-use as you want it to be. In my own kitchen, I'm partial to using the dry mix as a seasoning in other things like the base for this play on a buttermilk-brined fried chicken sandwich (inspired by J. Kenji Lopez-Alt's famous Serious Eats recipe).

1. In a large bowl, stir the paprika, cayenne pepper, ranch seasoning, buttermilk and large egg until fully combined. Add the chicken breasts, covering it completely with the buttermilk. Move the entire mixture to a gallon-sized freezer bag and refrigerate overnight.

2. Combine the dry ingredients in a bowl, and several tablespoons of the spice mixture from the marinade bag, stirring until incorporated. Toss chicken breasts in the flour mixture until a thick coating forms.

3. Heat the peanut oil to 425°F in a large cast-iron chicken fryer or a large wok over medium-high heat. Using tongs, tap any excess flour off the chicken breasts and place into the oil, frying for about five minutes on each side. Remove from the oil one piece at a time, and place on a clean wire rack set on a rimmed baking sheet.

4. Place the sheet into a 350-degree oven, and bake for about 10 minutes or until an instant-read thermometer inserted into the thickest part of the breast registers 150 degrees. Remove from oven, and place the breasts on a paper-towel-lined plate until slightly cooled.

5. Serve the fried chicken breasts on toasted potato buns with sliced lettuce, tomato, red onion and a drizzle of mayonnaise. (But feel free to double-down and substitute more buttermilk ranch.)

I also have a go-to dip that I make at home that mimics all the high notes of ranch but is also reminiscent of Green Goddess dressing (you know, for health). It's perfect for the aforementioned snack plates.

1. Add all the ingredients to a blender and pulse until well-combined. Add salt and pepper to taste.