We are all the “Fraggle Rock” Trash Heap now

Face it, we're made of trash, like Marjory the Trash Heap, and mired in one place these days 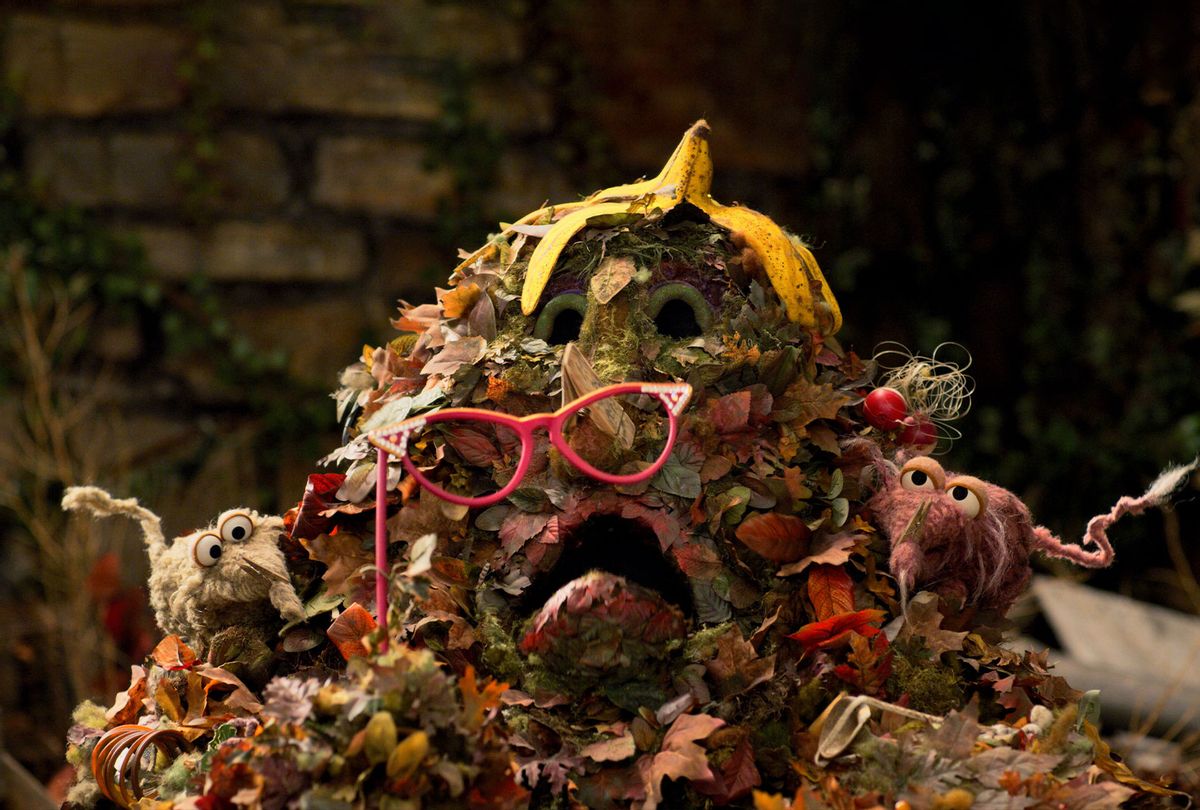 Trash Heap in "Fraggle Rock: Back To The Rock" (Photo courtesy of Apple)
--

I was afraid of her at first. Intimidated. Like the Gogans from the original "Pete's Dragon," like baths and clowns, the Trash Heap from "Fraggle Rock," the Jim Henson-created, children's puppet musical comedy show, scared me as a young child.

"Fraggle Rock" premiered in 1983. What was interesting about the show immediately was that it invented a whole biosphere of characters in various sizes and with varying roles: the Fraggles, furry-tailed creatures who live in caves and like to have fun; the Doozers, tiny construction-minded beings who diligently make mini buildings out of radishes, which the Fraggles then eat; large monsters called Gorgs who are the monarchs or think they are; and even humans, known to Fraggles as "the Silly Creatures from Outer Space."

Outside of the Fraggle caves resides the Trash Heap. The Muppet Wiki describes the character, named Marjory, as "a large, matronly, sentient compost heap." Picture a puppet made of dead, brown leaves. "The Trash Heap knows all and sees all," according to the Muppet Wiki. "In fact, Marjory is all." Along with the leaves, Marjory is made of banana peels, citrus rinds. Occasionally one may glimpse a bottle or egg carton or tin can in her dark folds. Originally voiced by Jerry Nelson, she sometimes wears a horn-rimmed lorgnette, fans herself with plastic and sings torchy, bluesy songs.

In 1987, the original "Fraggle Rock" went off the air. Now in 2022, Apple TV+ is airing "Fraggle Rock: Back to the Rock," executive produced by Lisa Henson and Halle Stanford of The Jim Henson Company and longtime Henson collaborator John Tartaglia. The main Fraggles are back in the welcome reboot, characters like Gobo, Mokey, Wembley, Boober and Red. So is the catchy, joyful theme song.

So, blessedly, is Marjory.

As an adult, I've turned into a connoisseur of bubble baths. Clowns are okay. But the Trash Heap has become simply excellent. Not only that, but Marjory can speak to us, pandemic-weary and burnout, now more than ever more. In 2022, we are the Trash Heap.

Related: What the fuzzy animals of Netflix's "The House" can teach "Don't Look Up" about climate anxiety

The Fraggles come to the Trash Heap for sage advice, which she freely dispenses, along with those jazzy tunes. Many episodes of the original series feature an adage from her, always memorable: "Relax. Go with the flow. Go with your nose." Most of her wisdom is about trusting yourself, even or especially if you are a tiny, uncertain creature.

Unlike the other characters in the "Fraggle Rock" world, there's only one Trash Heap. She exists by herself at the edge of Fraggledom, sinking down when she's sleeping or feeling dejected (relatable). Fraggles visit her, but they always want something. Usually, help or hope.

Community was always huge in "Fraggle Rock," how the groups live together and help each other—sharing the same water system, for instance. The Doozers rely on the Fraggles to eat their buildings, so that they have room and reason to build more, just as the Fraggles rely on the Doozers for tasty, crunchy construction. With this and other environmental storylines, "Fraggle Rock" was an early lesson for me in ecosystems.

But the Trash Heap doesn't really have that support. She's isolated, relying on the randomness of objects thrown away to survive. She lives outside of safety and is alone. Her only consistent companions? Two rats who may be acolytes, lackeys — or sons, home all the time now thanks to remote school.

Like the Trash Heap, we're mired. Most of us can't travel, or even move about our world safely in the ordinary ways we did before (at this point, I would be excited to go to the post office). Plans are canceled, put off indefinitely. We're as stuck as a garbage mound.

Still, the Trash Heap stresses the importance of fresh air, of taking advantage of the small breaks available to us, especially in nature. In an episode of the original show, when a Fraggle tells her he doesn't have an idea, the Trash Heap answers: "Go sit quietly under the tree at the end of the garden and think of one."

Most of the Trash Heap's 1980s proclamations are timeless, advice we would do well to listen to now, like wearing a hat. "Get eight hours sleep," she admonishes a Fraggle who has come to her for unrelated assistance. "Exercise and eat well," her rat boys chime in. "Oh, like cherry cheesecake!" the Trash Heap says.

Face it, we're made of trash, like Marjory. "I'm orange peels. I'm coffee grounds. I'm wisdom." Like us on our best days, Marjory makes the best of what she has — even though all she has, quite literally, is garbage. "Let this be your lucky blanket," she advises Fraggle Boober, who has lost his good luck charm, giving him a quilt that just landed in her dump. She lies a little, inventing a mythology of someone great who owned the blanket before. When Boober asks why the previous owner would give the blanket up, if it was so lucky, the Trash Heap magnanimously answers: "Maybe he wanted to share. Sometimes that happens when you have everything you want."

The Trash Heap is a moldy mound of resilience. There's drama in season 2 when the Gorgs (who don't understand she's alive and magic) move her in order to build a gazebo. But she escapes the fate of many fall leaf piles and is not burned. She's not thrown into the river, even though that's threatened. She weathers the crisis. She reinvents herself and is relocated, a process which, oddly, turns her briefly into a man, and changes her accent (Nelson's somewhat fluctuating accent has been described as Eastern European, Russian, and with Yiddish inflections). But who hasn't been through it since 2020?

"It's hard to kill a trash heap," Marjory says simply.

Like the oracle of leftovers, we have everything we need inside us — it just doesn't always feel that way, maybe especially not right now. "Listen to the little voice inside," Marjory reminds. In the Apple TV+ reboot, which is refreshingly faithful to the original's look and spirit, the Trash Heap is a little quieter. Her accent faint or gone, she's gained (garbage) bags beneath her eyes, but she's no less powerful. The Fraggles call her "an icon."

Listen, we've all changed (the show also replaces elder inventor Doc with a science grad student, who is a young woman). But trashy wisdom remains the same. "Don't be alone. Get some friends. Friends help." Things are better with a song and with company, even the virtual kind. And things are better with "Fraggle Rock."

"Fraggle Rock: Back to the Rock" is now streaming on Apple TV+. Watch a trailer for it below, via YouTube.