The white wine mom is social, casual and easygoing. The red wine mom is none of those things 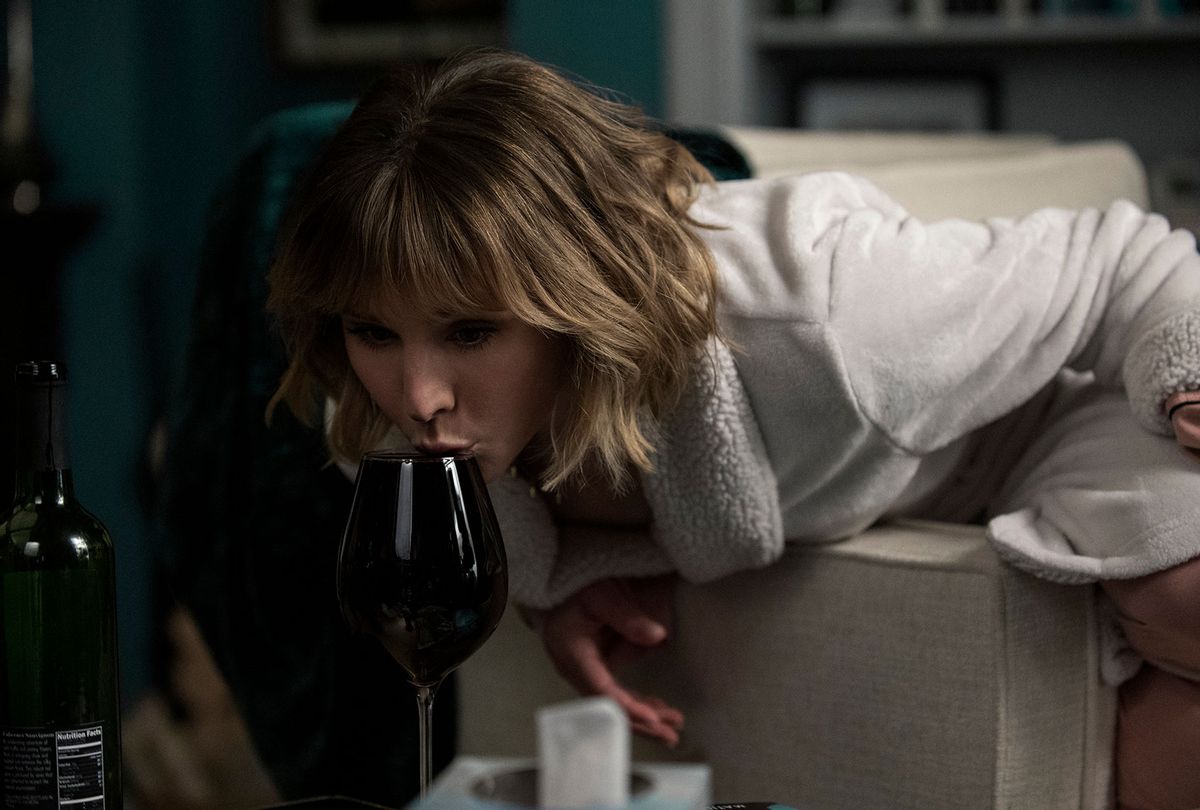 Kristen Bell as Anna in "The Woman in the House Across the Street From the Girl in the Window" (Colleen E. Hayes/Netflix)
--

Ah, the wine mom. You may know her from "The Good Wife." Or as Skyler White, the wife of Walter White in "Breaking Bad." What these female characters have in common, along with being mothers, is the wine glass frequently in their hands or omnipresent by their sides. Wine is their constant companion. Often, their only one.

There is so much drinking in "Bad Moms" and "A Bad Moms Christmas," a series of films about overworked and unappreciated mothers, that the franchise has spawned signature cocktail recipes. Multiple ones. The demands of parenthood, marriage, careers and the general overwhelm of the world push the moms in these movies to the breaking point. And the breaking point involves alcohol. A lot of free-flowing alcohol.

But from Tami Taylor on "Friday Night Lights" to Jen Hardy on "Dead to Me," the wine of choice for many fictional wine moms is frequently white. "The Woman in the House Across the Street from the Girl in the Window," Netflix's murder mystery spoof that features "Bad Moms" star Kristen Bell, doesn't break new ground in just about any way. But every time Anna (Bell) of "The Woman" drinks — which is an incredible lot — it's red. Her choice of wine says volumes (or milliliters) about her as a character and the idea of the wine mom in general.

Related: All hail the holiday aunt: the most untraditional character in traditional Christmas films

Lucille Bluth has her vodka. The southern women of "Sweet Magnolias" have their margarita nights. But many moms who are wine moms on television, film and books are white wine moms. It's white wine in the glasses of the ladies in the "Saturday Night Live" skit "Birthday Gifts" who all give their friend kitchen signs about being a wine mom. (And none of them except the birthday girl see the problem with this.)

White wine is easy. It's drinkable, even the wine that is objectively terrible. Sometimes, wine moms make it more drinkable — and more terrible — with the addition of ice cubes. Liz Lemon on "30 Rock" calls a lethal combination of white wine, Sprite and ice cubes her "funky juice."

The often-high sugar content of dessert wines and late harvest wines make them go down easier perhaps than say, a meaty Cab or full-bodied Malbec. Easier possibly to get drunk without realizing it, and pretty catching the light in a glass. Sometimes you need a good hot tub wine.

White wine just feels casual, something the wine mom could drink in the backyard by the pool. In the afternoon. Maybe, mid-morning. "Wearing black to their house parties/Crosby, Stills and Nash is playing/Wine is flowing with Bacardi" the (notably sober) Lana Del Rey sings in her song "Bartender" — and you just imagine it's Riesling or white wine sangria the "ladies of the canyon" are quaffing.

Beyond its sweetness and ease, there is a practicality to white wine. In graduate school, I stopped drinking red wine at university functions, even though I prefer it to white, because the red would sometimes stain my lips. I was also terrified of spilling on a professor's expensive carpet or down my inexpensive clothes.

Red wine seems . . . dangerous, especially in a house with children. But Anna is a mother whose child is dead, something "The Woman" makes frequent and terrible light of. The fact that she's alone in the house means she can pour herself a full glass of red in motion as she walks quickly through her immaculate, childless living room. She can stay up all night drinking that red, wearing light-colored loungewear (more danger). She can fall asleep over her glass. And Anna spills, creating a massive red wine stain which ruins her armchair, looking like blood.

When Anna fills her wine glasses, she fills them to the brim, so full her first drink is a bent-over slurp. A frequent and only gag in the show is how she manages not to spill all the time, though really this is more scary than funny, like a wine car crash.

Add to Bell's sizable acting chops the ability to swing around full glasses of wine the size of her head without incident.

Unlike the wine mom sipping mimosas at brunch or a refreshing white at the afternoon garden party, Anna starts drinking early in the morning, after the elementary school drop-off. She starts with and only drinks red, so much so that she has a punchbowl in the kitchen full of corks. Drinking this early tells us: She's a serious drinker. (She also literally tells us this in a voiceover.)

But drinking only red tells us: She's a serious person. She's not mindlessly binging a streaming service at night, but reading a book, what looks like a literary thriller titled "The Woman Across the Lake" (not to be confused with "Yellowjackets" fake book club novel "The Girl in the Train Window").

Sometimes you need something that you don't have to think about. And wine moms in shows often do not want to think. Frequently, they drink to forget. But along with that, Anna is puzzling things out. She's gonna solve a murder and save a girl — or thinks she is. Even the dress Anna manages to put on – when she decides to, then decides against, finally going on a date – is red wine-colored.

White wine is the social choice, according to the wine moms who drink it together like Jen and Judy in "Dead to Me," like Tami Taylor and everybody. Red is the solitary wine for sitting by the window alone in the dark, night after night, and scrolling through your ex's photos (where he's pictured with a new woman who also drinks red). It's the wine Anna curls up with, pretends is a hearty enough substitute for a meal, or for a friend, for a life outside her house.

Men drink. Men drink quite a bit more than women. A good 68% of men compared to 64% of women consume alcohol according to a 2020 study, but men drink in larger quantities: almost three times more alcohol than women per year, and nearly twice as many men as women are diagnosed with an alcohol abuse disorder. Still, it's mothers who drink who have acquired that label. The wine mom.

As Ashlie D. Stevens writes, we don't hear about the wine dad. We also don't really hear derisively about the beer dad, even though that is many dads. But the wine mom label has stuck, likely because it is big business: T-shirts, message wine glasses, memes, those signs that "SNL" mocked.

It's easier to laugh at a type than it is to think closely about it, to consider what about the conditions of motherhood might drive mothers to drink in the first place, conditions that have only and drastically worsened under the pandemic. What is drinking concealing? As Megan Garber writes in the Atlantic article "The Women and the Wine": "wine, to varying degrees of acuteness, indicates the pressures that bear down on [women], constantly. And the notion that those pressures must be borne, ultimately, alone."