No amount of wine can make "The Woman in the House" spoof work, despite its charismatic star

Kristen Bell would be terrific in a satire of a cheesy psychological thriller. Just not this one 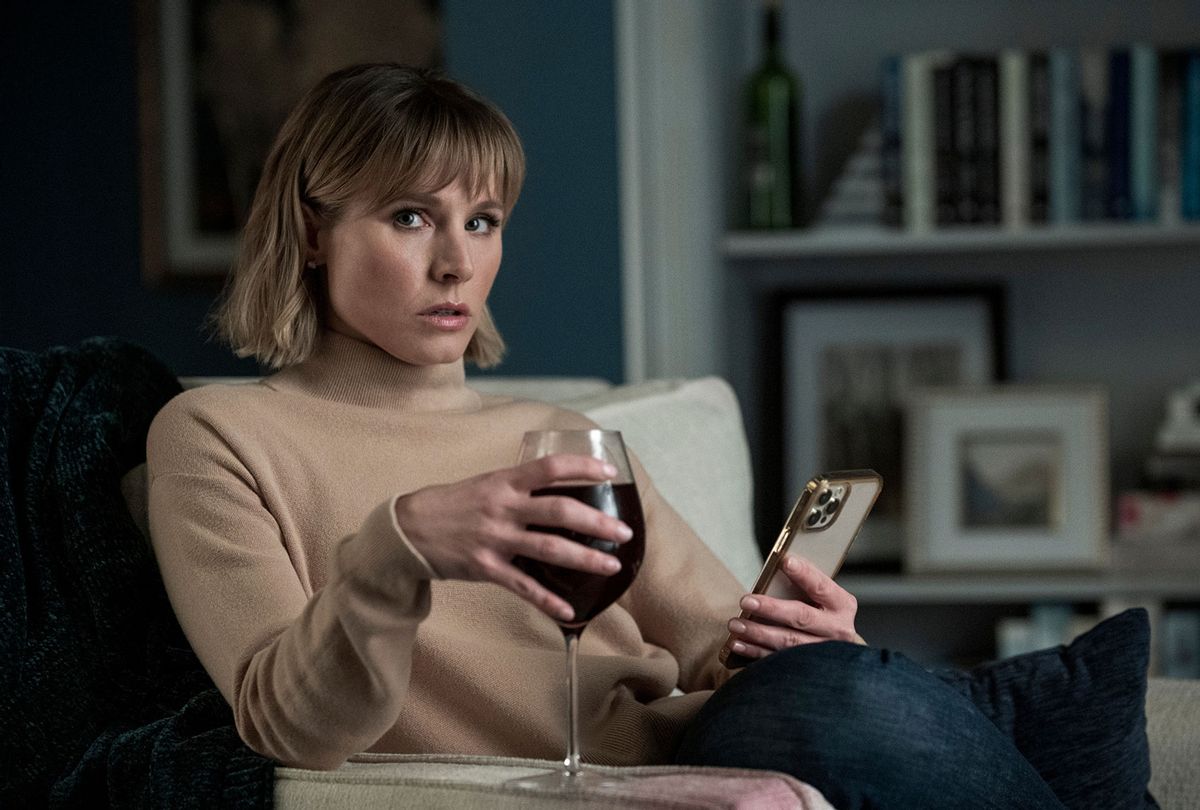 Kristen Bell in "The Woman in the House Across the Street from the Girl in the Window" (Colleen E. Hayes/Netflix)
--

Is there such a thing as a "slow burn" satire? Here's a follow-up question: Is trying to describe "The Woman in the House Across the Street From the Girl in the Window" as such being kinder to it than it deserves?

The answers, in order, are no and yes.

A person can't be blamed for digging in search of purpose or reason in a Kristen Bell vehicle, one whose satirical intent is alleged in its preposterously lengthy title. A headline like that beckons the viewer with the promise of brainless "Don't Be a Menace to Society While Drinking Your Juice in the Hood"-style shenanigans.

You'd be hard pressed to find a better performer than Bell to pull off something on that level. "The Good Place" proves she is as at home with screwball comedy as she is with drama. Fold that talent into any decent parody of mediocre psychological thrillers, and ideally all we'd have to do is sit back and watch all parties involved alchemize TV movie tin into gold medal foolishness.

But its writers Rachel Ramras, Hugh Davidson, Larry Dorf never fully exercise their license to spill the action into the realm of ridiculousness, which is where this belongs. Instead "The Woman in the House," and that's as much of the title as I'm going to spell out from this point on, flirts with outright lunacy but never fully somersaults into it, and that's a mistake.

RELATED: The cosmic joke's on her

Bell plays it straight in the opening episodes and escalates the lunacy as the plot progresses, trusting the viewer to find the spoofery in details. But when we meet her character Anna (Kristen Bell) there isn't much to laugh about. Anna drinks heavily to drown a lasting sorrow that's frozen her in place. It's been three years since her husband Douglas (Michael Ealy) left her, and her career as a painter has stalled out. She's also on heavy doses of Clonazepam, causing her to lose track of time and occasionally hallucinate, as one does in movies like this.

When the handsome Neil (Tom Riley) moves in across the street with his young daughter Emma (Samsara Yett), Anna finds a reason to pull herself out of her funk. But the more she finds out about Neil, the less will she has to resume living. Until, that is, the evening that she witnesses a woman bleed out from her neck in Neil's living room window. Then the nosy neighbor transforms into a citizen detective, bringing trouble on her house and his.

Some of you may have noticed this plot liberally borrows . . . no, straight-up lifts the script from Joe Wright's 2021 Netflix dud "The Woman in the Window," which earned its star Amy Adams a nomination for the Alliance of Women Film Journalists' highly prestigious She Deserves a New Agent Award.

One would think this limited series would look at everything that flop did wrong and go nuts with dancing all over it, amplifying its flaws into grand slapstick. Instead it makes other errors, some of which kill its comedy potential.

At this point I'm obligated to drop a spoiler, albeit one that's revealed minutes into the opening episode, because it deflates a sizeable amount of the comedy that follows.

Early in the premiere we find out that Anna's grief is weighted with the death of her daughter who, like the little girl across the street, would have been around nine years old. The circumstances of the child's death are eventually established as being bizarre and farcical, and along with a recurring gag involving the epitaph on her little headstone, it's all supposed to be hilarious.

But Bell is actually too convincing at playing a damaged woman saddled with dialogue that's only slightly screwier than what we'd encounter in a Lifetime movie script. That means that "The Woman in the Blah Blah" is only as funny as one finds the recurring gag of Bell pouring voluminous glasses of red wine to the brim while believably behaving like a bereaved mother with a drinking problem.

The caricature works as far as one can laugh at her destroying one Corningware casserole dish after another for the silliest reason and others that make sense if you've ever struggled through the fog of despair.

Taken as a whole, these fleeting moments lead to the realization that the series' creators and the cast have conflated satire with absurdity. The former finds hilarity in hackneyed entertainment genres and worn-out tropes. The latter helps a person make sense of overwhelming sadness, like some down-in-the-dumps guy constantly losing his house key on one terrible day and having people return it to him, only for it to break off in the lock as he's trying to enter into his apartment. (This device was recently used in a critically acclaimed TV show, by the way.)

But straight-faced spoofs blunt the impact of such subtleties, souring what should be jokes into examples of bad form that rely to heavily on the viewer to search for laughs that the joke-teller swears are right in front of us, thus defeating the show's effectiveness as a work of satire.

Granted, there's the natural compulsion to find something positive in a project that should have been a slam dunk for Bell, an actor most people deeply enjoy. The best that can be said about "The Woman in the House" is that it is equal in heft and worth to your average women-in-peril cable movie. But if you expect more from Bell and everyone else in the cast, its shortcomings just kill it for us.

"The Woman in the House Across the Street From the Girl in the Window" streams on Netflix on Friday, Jan. 28. Watch the trailer for it below, via YouTube.