"The Good Place" comes to a worthy end, where it finds the bittersweet joy of what makes us human

Saying goodbye is the hardest thing we'll ever do, but this lovely, tearful & funny ending rewarded our faith in it 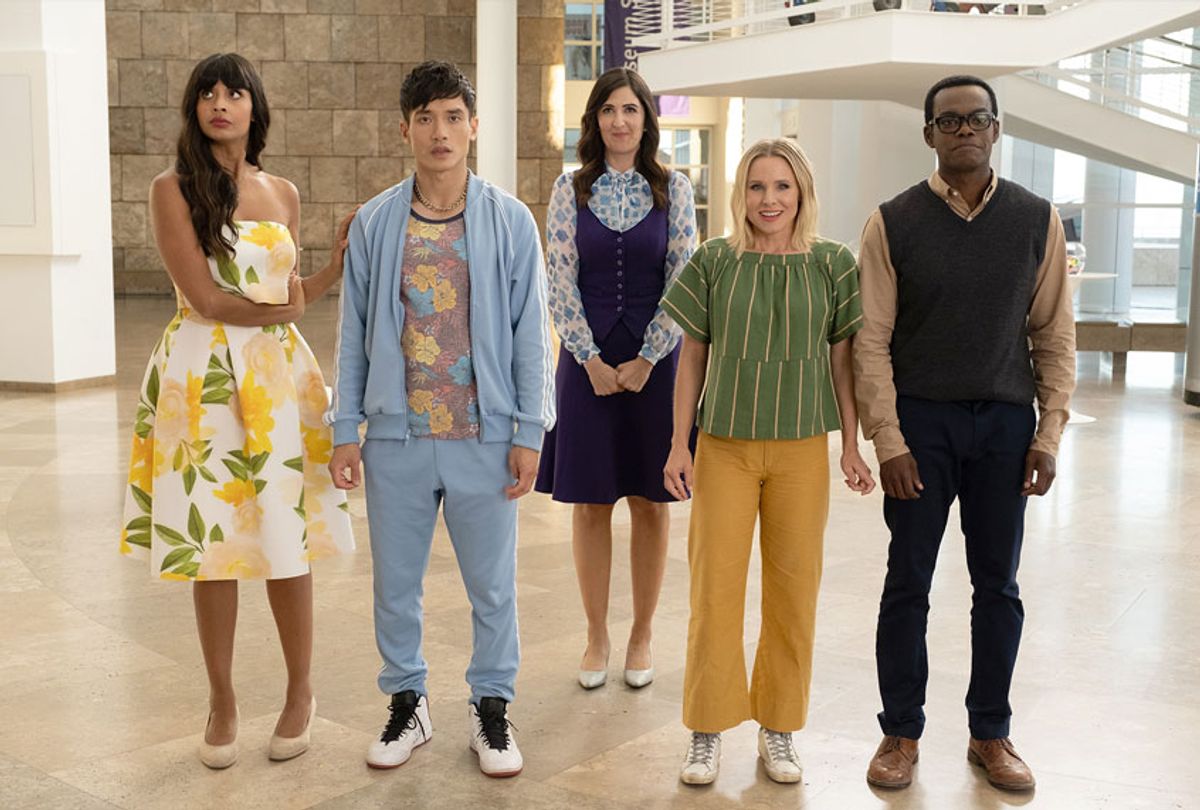 The following article discusses major spoilers from the series finale of NBC's "The Good Place."  If you're not caught up on the series, stop reading now and go watch it! Past episodes are streaming on Hulu and Netflix.

Affectionate endings have their place in television. We need them as much or more than a so-called perfect or brilliant close to a television series. There are precious few of those anyway, and even they provoke debate over their merits. Whereas the ending of NBC's "The Good Place" consciously aims for the heart and nothing else, reminding us that our ultimate legacy, our greatest worth to the universe, is in the positive feelings we leave behind in the memories of those who know us.

This is the meta message nestled within "The Good Place" finale, "Whenever You're Ready," marking the ending of a sweet series the likes of which had never been seen before and, now that it's over, we'll not likely get again.

That's fine – that, in fact, is the conclusion that Michael Schur's comedy draws at the final door perched on the edge of its existence. Imperfection is the essence of what it is to be human, a notion that follows us into the afterlife whatever shape that takes.

And "The Good Place," for all of its greatness and nirvanic creative heights, delivered a thoroughly imperfect goodbye. Its finale season introduced a number of characters and brought back an established guest character, Simone (Kirby Howell-Baptiste), only to partially render their character portraits. Episodic plots focused more on propped up scuffles between the demons from the Bad Place doing their best to screw things up for Eleanor Shellstrop (Kristen Bell), Chidi Anagonye (William Jackson Harper), Tahani Al-Jamil (Jameela Jamil), Jason Mendoza (Manny Jacinto) and their reformed demon architect Michael (Ted Danson).

That said, there was never any question that all would be well in the end of the so-called Soul Squad. In fact, their main crisis was averted in its midseason premiere – four episodes from the end of the series.

Although "The Good Place" officially ended Thursday night, the writers stretched out its goodbye over the last three half hours by enabling the gang to save humanity from being wiped out by the Judge (Maya Rudolph) and devising a better and more equitable system for the afterlife that gives each soul a chance to prove itself. The humans even figured out a new purpose for the demons in The Bad Place, retraining them to test humans as opposed to torture them (although the test is still a version torture).

With the afterlife set right and both recently dead humans and long damned souls granted the opportunity to ascend to The Good Place (for real this time), the Soul Squad finally earned their ticket to paradise – only to discover that the ultimate prize of an eternity in bliss is, in reality, antithetical to human existence.

The writers revealed this by way of a Good Place encounter with Hypatia of Alexandria (Lisa Kudrow, one of several inspired cameos in these last installments), a Hellenic mathematician and philosopher who, after eons of getting everything she could possibly want, is rendered stupid, blank, and addicted to milkshakes.

"This place kills fun," she tells Eleanor and Chidi. "And passion. And excitement. And love. Until all you have left are . . . milkshakes." Therefore, the friends come up with the plainest, most elegant solution to the problem of eternity in paradise: the option of ending it. They create a door through which the blessed souls can walk and cease to exist in the universe, like a wave rejoining the ocean. This solves the problem of being human – for life or the afterlife to have meaning, we have to be aware that it will all end at some point.

To play the devil's killjoy for a moment, one might point out that this allows the writers an easy way out of a premise that was built upon posing all manner of philosophical questions and revealing, one by one, answers that shocked and delighted and occasionally plucked at our anxieties.

And "The Good Place" could have easily ended with the Jan.16 episode, where the gang finds out they've finally earned entry to paradise and ascend in a glittery golden hot air balloon.

That would have been nice and sweet, even apt, but utterly unsatisfying. A series that begins with tricking viewers into thinking they're watching a comedy about paradise when they are actually witnessing a silly version of hell cries for a more complicated ending.  The better way, then, is what the writers did, which is to expound the foolishness of attaching happiness and contentment with the attainment of one great goal. When we humans get what we want, the thrill of victory rarely lasts. That's true of our lot and of our expectations of how our favorite shows close out the tab.

"Whenever You're Ready" is a lovely bookend to the midseason finale's thesis which, you may recall, was "the answer is us." As Chidi observes in the show's penultimate episode, the Good Place is not really even a place. "It's having enough time with the people you love," he says.

In this last episode we get to understand what he means by that even if, at the time, he may not have understood. The key term here is "enough," not infinite. And this translates to accepting loss and leaving. First Jason realizes he's had his fill of endless wings and games of "Madden NFL" played at the center of football stadiums, and says his goodbyes.

Then Tahani is ready for something new – not dissolving into the universe, but finding some new purpose, something new to master. She trains to become an afterlife architect, like Michael.

The most bittersweet of moments is the series' most inevitable, the parting of Chidi and Eleanor. Soulmates declare eternity to one another, except when they're plopped into an actual version of eternity to endure.  So Eleanor takes Chidi to Greece, then Paris, and doesn't want to let him go until, in a moment of enlightenment and reckoning, she realizes it's the most loving act she has in her.

Not her last one. Before Eleanor heads through the door herself, she comforts Michael one last time – and leads Mindy St. Claire (Maribeth Monroe) out of the Medium Place, urging her to give happiness a shot by forming bonds with other people. Better still, she witnesses Michael get what he has wanted so badly – he actually gets to be a real human.

"The Good Place" finale hits all the emotional notes the show's followers wanted and a few we didn't expect. A cameo by Nick Offerman, who appears as Tahani's woodworking tutor, is a nice touch, along with a scene shared by Danson and his wife Mary Steenburgen, Michael's guitar tutor as part of his new life on Earth.  Depending on the kind of person you are, plenty of moments are designed to open up the emotional floodgates.

What makes this particular finale special is its intentional punctuation with a cheap laugh that's also one of the sweetest statements the show can offer to anyone who knows and loves it, and will miss it. "The Good Place" has often made us cry over the years, so to go out with a well-placed snort and giggle is kind and magical, and a nice way to remind us that in the end, as Janet sums it up, there was no bad stuff in this show. It was all good. Honestly, that's all any series worth remembering owes the souls that have faith in it.