In a final season focused on a shenanigan-driven experience, the heartfelt comedy returns to the ultimate question 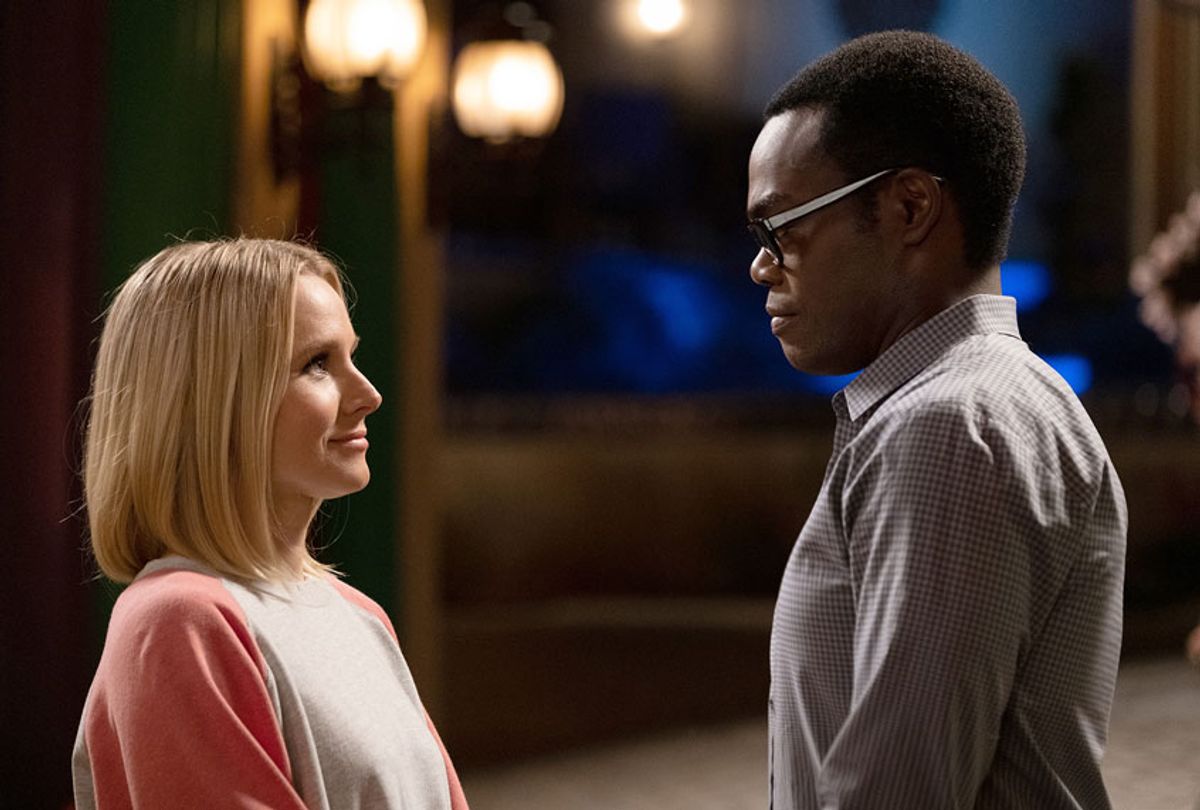 Midway through Thursday’s midseason finale of “The Good Place,” it dawned on me that to the best of my recollection, nobody has asked this specific question: “What is the meaning of life?”

Eleanor (Kristen Bell) dances around the idea in Season 3 finale when, in an anguished moment she asks the all-knowing Janet (D’Arcy Carden) , “Can you just, you know, like, tell me the answer? You  know, the answer to everything . . . There has to be meaning to existence, otherwise the universe is just made of pain, and I don't like the thought of that, so tell me the answer.”

Janet has a response — not a definitive answer gleaned from some divinely verified source, but a supposition based on what she's learned about being human.  “If there were an answer I could give you to how the universe works, it wouldn't be special. It would just be machinery fulfilling its cosmic design. It would just be a big, dumb food processor.”

“But,” she adds, “since nothing seems to make sense, when you find something or someone that does, it's euphoria.”

"The Good Place" creator Michael Schur and his writers reveal the reason for skirting the classic  “meaning of life” question in the dialogue in Thursday's episode, “The Answer,” concurrently a sprint-down-memory lane episode in which Chidi’s (William Jackson Harper) life flashes before our eyes and gives a preview of the final lesson the comedy may impart. And it’s so very simple, as Chidi confirms by way of a note he wrote to himself and left with Janet.

“There is no ‘answer,’” the note says. “But Eleanor is the answer.”

“The Good Place” is the rarest of rarest of rare shows because of plain-spoken sentiment such as this: economically presented, utterly true and in the way of all schools of moral philosophy, open to multiple interpretations.

Taken at face value it explains the relationship of opposites at the center of the story, Eleanor and Chidi.  The two could not have less in common when they met in the afterlife. They were assured they were soul mates even though, in reality, the architect who stuck them together, Michael (Ted Danson), intended them to torture one another.

Based on their profiles, his plan should have worked. In life, Eleanor was a mean and selfish woman, a self-described “Arizona trash bag” who used her intelligence to look out for herself and take advantage of anyone who got in her way. Chidi was a philosophy professor obsessed with ethics but paralyzed by indecision, continuously caught between the ethical quandaries presented by life's low stakes, banal choices.

And notably,  Chidi is the only character who didn't receive a perspective-altering family visit in the third season. Tahani (Jameela Jamil) was able to squash the rivalry with her more famous and celebrated sister. Jason (Manny Jacinto) had to make peace with knowing that he could not save his criminal father. Eleanor came to forgive her mother and accept that she's left her blunders in the past.

Chidi’s life is a lesson that cannot be adequately taught with a simple visit home, as we learn. “The Answer” makes up for denying a homecoming to Mr. Anagonye  by devoting an entire episode to a sprint through Chidi’s scores of lifetimes – more than 800 of them, including his life on Earth and all of Michael’s reboots afterward – and depicting what hundreds of years of falsely believing there is an answer to everything will get you.

His lifestyle of decision-making-by-research begins at 8 years old, when he delivers an hour-long lecture to his fighting parents on why they should not get divorced. This calcifies his personal philosophy at an early age, since what he believes to be a positive outcome to his lesson proves that answers to every possible question are merely a book or 10,000 away.

But we also see how this zealous consideration of every argument presented by every great philosopher prevents Chidi from forging lasting relationships. He's a creature of high intellect and stunted emotional expression.  He's in the midst of losing one of his longest friendships when his death drops out of sky, rendering all philosophies useless. Or so it would seem.

From here, “The Answer” amps up the absurdity by placing Chidi in a number of afterlife situations that defy logic, intentionally – the most illogical and heartwarming being the love he finds and stubbornly keeps finding over multiple lifetimes with Eleanor.

The events of the entire episode take place in the space of Michael snapping his fingers to restore Chidi's memory at Eleanor's request: they need him to make the case for humanity's existence and a new way of evaluating a soul's eligibility to enter paradise.

As for the note, the telling part is its simplicity. In life, we see Chidi presenting his mentor with a dissertation that’s well over 3,000 pages. His answer to the riddle of existence is nine words long.

This is not where “The Good Place” ends, thank goodness. The Chidi adventure is a cliffhanger designed to keep is hanging on until its January return.

Up until now, Season 4 has wrapped up Eleanor, Tahani, Jason, Janet, and Michael in a plot that casts them as the coordinators of a contest between their team of afterlife fugitives and the Bad Place, with the stakes being humankind's fate. The onus is on the quintet to prove to the Universe’s Judge (Maya Rudolph) that human beings are capable of improvement and therefore, worthy of redemption.

They succeed in winning this experiment — and as their reward, the Judge announces that she’s wiping out the human race and starting over. Twist!

But this is the logistical next step in the escalating chain of “what if” queries of which this show is comprised. What if the place we believe to be paradise is actually hell? Can condemned souls evolve into better humans? Is it possible for any modern-day human to ever be completely ethical and virtuous, and can the universe forgive us if we make our best effort and fall short nevertheless?

And as Eleanor asks, why are we here and what’s the point of it all? “The Answer” addresses this for her and for the rest of us, and not just in that note.

At the outset of the experiment, the Bad Place demons send the heroes four souls designed to be their worst nightmares. Tahani gets trashy gossip columnist John Wheaton (Brandon Scott Jones) who added to her Earthly miseries when she was alive. Chidi’s ex-girlfriend Simone (Kirby Howell-Baptiste) arrives to torture Chidi and Eleanor in a handy two-fer. Last, and best, there is rich, entitled, racist, sexist, and aggressively mediocre Brent Norwalk (Ben Koldyke), one of the Universe's designs to drive everyone out of their minds.

And while these guest characters’ relative under-development constitutes one of the fourth season’s weak spots,  Brent’s presence is a work of evil genius.

Koldyke’s hyperbolic portrayal makes Brent generally detestable. He's unapologetic, smug, and cannot fathom how anyone would consider him to be anything less than the greatest of all great people. Where Eleanor, Chidi, Tahani, and Jason attempt to sow patience and understanding, Brent demands loyalty, worship, and limo service from Janet. Where they offer honesty, he prefers flattery and agreeableness.

Even actual people who resemble Brent aren't likely to cop to any similarities in their conduct or demeanor. That is the point: the world is full of Brents, unfortunately. They run the place and deserve the lion’s share of blame for slowly destroying the planet.

While “The Good Place” is a love story in the obvious sense, with Chidi and Eleanor finding one another again and again; Jason somehow falling for not-a-girl Janet; and Tahani finally learning to love herself as the first step to loving others,  these final episodes also remind us of our obligation to be in love with humanity itself.

“What We Owe to Each Other,” Chidi’s life-defining work, is a thesis the series returns to again and again in many different guises.  “The Answer” represents that concept taking its final form, that of an epiphany that is also a challenge. Brent may be the worst the human race has to offer, and in the final seconds of what he knew to be his existence, he suddenly and genuinely became, if not good, then at very least better.

Bringing him to that point, though, is a slog. But – and it is a gigantic, crushingly heavy but – people like us owe it to people like Brent to trust that they can evolve into kinder, more considerate beings because our fate is tied to theirs. This is a hard truth being spoken aloud by Democratic candidates on the campaign trail and more timidly elsewhere; we are so divided as a nation, as a species, as a planet, that very few people want to hear this plea, let alone build toward finding common cause with people who don't share our views and beliefs.

In endeavoring to wrap that message in sincere humility, “The Good Place” assures us there’s no need to bang our heads against the wall or to overthink how to fight to the pandemonium. The solution is simple.

There is no answer. But the answer is us.