"The Daily Show" launched as a parody of news, but 25 years later it has become more important than the news 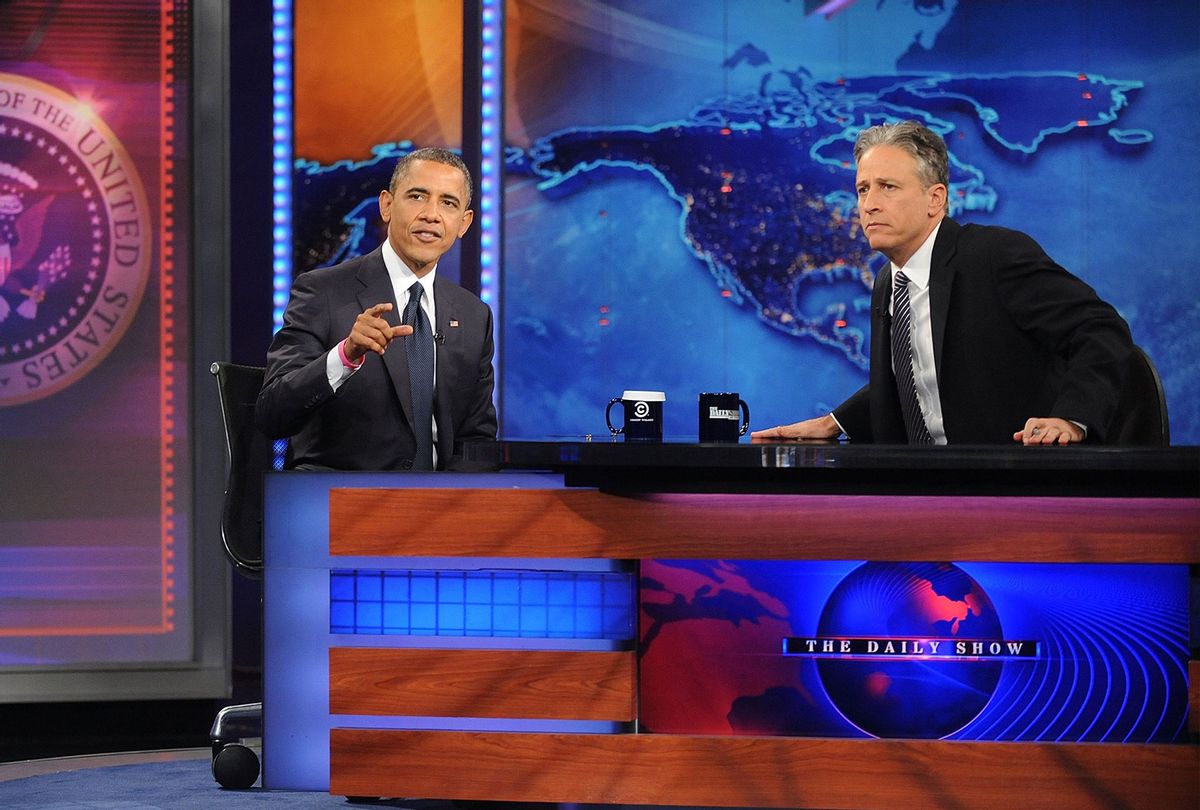 In 2004, former Fox News pundit Bill O'Reilly kept calling viewers of "The Daily Show with Jon Stewart" "stoned slackers." He even repeated the epithet to Stewart's face when Stewart appeared as a guest on O'Reilly's show in September of that year: "You know what's really frightening?" O'Reilly said. "You actually have an influence on this presidential election. That is scary, but it's true. You've got stoned slackers watching your dopey show every night, and they can vote."

In 2004 John Kerry was running against George W. Bush. So, we know that "The Daily Show" didn't change the outcome of that election. But we do know that by 2004 the show had already begun to permanently change the role of political satire in the United States.  In fact, in the face of the O'Reilly insults, executives at Comedy Central decided to ask Nielsen Media Research check on whether or not O'Reilly was right in demeaning the audience of "The Daily Show." Rather than confirm O'Reilly's insult of Stewart's viewers, they found the opposite. Far from being slackers, viewers of Jon Stewart's show were more likely to have completed four years of college than those who watched "The O'Reilly Factor."

That was only the beginning of research that showed the positive and powerful impact of "The Daily Show" and the politically informed, engaged, and savvy qualities of its audience.

This week marks the 25th anniversary of "The Daily Show," which launched on July 22, 1996. The first host was Craig Kilborn, who held the spot for two years before Jon Stewart took over and turned the show towards more political satire. Stewart hosted for 16 years and it is during his tenure that he not only redefined the show, but also redefined the role of satire in U.S. politics.

In 2015, Stewart stepped down as host and was replaced by Trevor Noah, who initially suggested he would be a less political host, but eventually has become at least as politically engaged, if not more so. Since taking over as host Noah has offered his own unique contributions to the social relevance of satire and continues to make "The Daily Show" one of the most significant sources of satire today.

These days the relevance of political satire to public dialogue is almost taken for granted. Candidates regularly appear on late-night comedy shows, satirists frame issues of social relevance, stories get "broken" by satire news shows, and comedians go beyond joking to address their audiences on issues all the time. But it's important to remember that this was not always the case. Comedy icons like Johnny Carson and David Letterman were not regularly engaged in politics. And those comedians who were, like Lenny Bruce or George Carlin, didn't have the impact that a show like "The Daily Show" has had.

As we celebrate 25 years of "The Daily Show," let's look back on five central ways that the show permanently changed US satire.

As Geoffrey Baym chronicles in From Cronkite to Colbert the turn of the millennium marked significant shifts in the ways that broadcast news was reported. News became increasingly more sensationalized, more focused on punditry than information, and more desperate to keep viewers glued to their show in order to watch the next crisis. As these shifts took place, Stewart's "The Daily Show" was offering viewers both a critique of the news media and an alternative form of news.

In 2004, the same year O'Reilly was ranting about Stewart's "stoned slacker" audience, The Pew Research Center released a study that showed that 21% of people under age 30 said they regularly learned about the campaign and the candidates from comedy shows like "The Daily Show." That number was up from 9% in 2000. Overall, over 50% of those polled in 2004 suggested they learned at least some of their political information from comedy. The point is that O'Reilly was right to worry, yet he was wrong about what to worry about: "The Daily Show" viewers weren't stoned slackers, but they were a threat to shows like his. Young viewers were increasingly pivoting to comedy shows like "The Daily Show" for their political reporting.

But, perhaps, what is most interesting is the fact that in 2004, "27% of all respondents under age 30 [said] they learn things about the candidates and campaigns from late night and comedy programming that they did not know previously." That self-reporting mirrors research conducted by Julia R. Fox, Glory Koloen, and Volkan Sahin, who found that in 2004 the "amount of substantive information in 'The Daily Show with Jon Stewart' and the broadcast network newscasts was the same." The difference was that "The Daily Show" mixed substance with entertainment; whereas the news combined substance with hype.

Considered this way, it isn't surprising that over the years "The Daily Show" – and other shows like it – have only become more central in attracting viewers as a source of news and no longer just ironic commentary on it.

Over the years, when Stewart would be confronted with these shifting attitudes and habits, he would regularly insist that his main job was to tell jokes and he didn't want to be a journalist. Yet he often signaled that he felt compelled to step in because the mainstream news was doing such a lousy job.

Perhaps one of the most famous instances of this took place in 2004 when Stewart criticized Tucker Carlson on CNN's "Crossfire" and asked him why he was doing such a lousy job. "You're doing theater when you should be doing debate," said Stewart. "What you do is not honest. What you do is partisan hackery."

He then went on, "You're on CNN. The show leading into me is puppets making crank phone calls. What is wrong with you?" CNN canceled the show shortly thereafter.

In 2007, Stewart was tied with Dan Rather, Tom Brokaw, Anderson Cooper and Brian Williams for "Most Admired News Figures." What made that ranking exceptionally weird was the idea that Stewart — a comedian -– was even included on the list of "news figures" in the first place. The results clearly showed that he had changed the public relevance of satire news.

Then, when Walter Cronkite died in 2009, Jon Stewart was voted in an online poll by Time magazine as "America's most trusted newscaster." What's more, the result wasn't even close: Stewart carried 44%  of the vote, leaving NBC's Brian Williams (29%), ABC's Charles Gibson (19%) and CBS' Katie Couric (7%) in the dust.

These trends continued well after Stewart stepped down. When Donald Trump was elected, we witnessed satirical comedians increasingly stepping in to defend institutions, rather than just critique them.  Seth Meyers schooled Trump on how to be presidential, Hasan Minhaj lectured him on the First Amendment, and Michael Moore revealed his fascist tendencies.

Satire viewers are informed and engaged

It isn't just that "The Daily Show" changed the role of satirical comedians; it is also that it changed its viewers. Over the years various studies have shown that viewers of satire news are educated, intelligent, informed, politically engaged and politically active.

One 2012 study by Fairleigh Dickinson University showed that viewers of "The Daily Show" were some of the most informed and viewers of Fox News knew less than viewers of no news.

Even better, it is common to worry that consuming satire makes one cynical and apathetic. But no research confirms that satire makes its audience apathetic. In fact, quite the opposite. A study by Hsuan-Ting Chen, Chen Gan, and Ping Sun showed that the link between cynical anger and political satire was directly tied to citizen engagement. The researchers found that when "people consider an issue personally important and anger serves as a motivating factor, exposure to cross-cutting political satire can transform people into active citizens."

What has yet to be thoroughly proven, but seems to be backed by a number of correlating studies, is the fact that the unique blend of satirical critique, commitment to democratic institutions and modelling of political engagement found on "The Daily Show" under both Stewart and Noah and on similar shows like those of Samantha Bee, John Oliver, Stephen Colbert and others has arguably created a new type of satire viewer who has an even higher propensity to not just enjoy the ironic wit of satire, but to also want to make a difference fighting the source of the folly.

Mark Twain once testified before Congress. So, the idea of a satirist testifying at Congress in the hopes of influencing policy is not exactly new. But the degree to which contemporary satirists regularly engage in direct political influence and leadership is new.

Stephen Colbert started his own Super PAC (Political Action Committee) in order to teach viewers about campaign financing. Stewart and Colbert held a rally on the National Mall hoping to encourage voter turnout in 2010. Jimmy Kimmel used his show to draw attention to healthcare reform. Samantha Bee has helped raise funds for the U.S. Postal Service and raised money to support Puerto Rico.  Hasan Minhaj's "Patriot Act," which aired on Netflix, regularly offered shows with political impact. And John Oliver is considered to have moved satire news to a level far beyond "just" comedy.

What's amazing about this list is that all but one of the comedians worked with Jon Stewart. Stewart offered a form of political satire that really cared about offering the public leadership. The idea was to do more than get the audience to engage intellectually and think critically; it was to ask them to get involved and to show them ways to do it. For example, Stewart, himself, became a strong advocate for the health care needs of 9/11 first responders and was instrumental in getting a bill passed to support them.

It wouldn't surprise us to know that there are satirical news shows in the U.K., but what about in Nigeria? Or Iraq? Over the years that Stewart was hosting "The Daily Show" we saw a boom in satire news and current affairs programs in countries as varied as Bosnia and Herzegovina, Iraq, Kenya, North Macedonia, Nigeria, Serbia, Venezuela, and Zimbabwe. Okey Bakassi hosted the popular "The Other News" in Nigeria, and Chumel Torres, referred to as Mexico's Jon Stewart, hosted a satire news show on YouTube that eventually migrated to HBO before being canceled in 2020. In 2018 Taiwanese comedian Brian Tseng launched the first ever political satire news show in Mandarin.

In fact, the current list of satire news shows is quite long.

So, what's up with all of these seemingly copycat shows to "The Daily Show"? The answer is that, as is the case in the United States, there is increasing skepticism across the globe of traditional news outlets. Satire news ends up seeming more transparent to viewers, which, in turn, offers these shows greater potential impact on the political conversations in their countries.

In mid-June, Noah announced he was taking a break from "The Daily Show" until mid-September. Noah suggested that when he returned the show would be different but has yet to reveal in what ways. While we wait for the newer version, there is one thing we can be sure of: the social significance of political satire created by 25 years of "The Daily Show" is here to stay.