"The Daily Show" launched 25 years ago to tackle the news: "We didn't lampoon it, we became it" 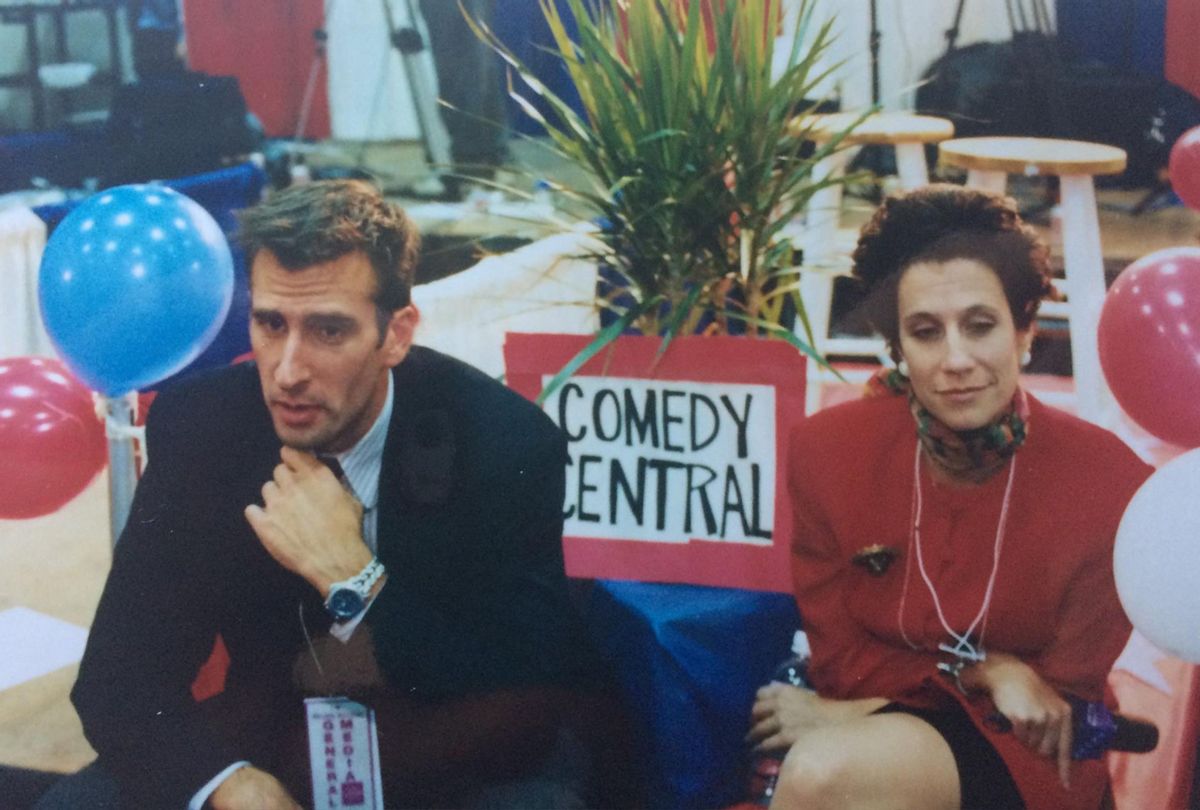 Twenty-five years ago, the best news show on television debuted — on Comedy Central.

From its beginning, "The Daily Show" distinguished itself with its combination of brutally funny cynicism and furious hope, a balance refined when Jon Stewart became host in early 1999, and maintained today with Trevor Noah behind the desk. And from its beginning, it's been a show much about the news media as the news itself.

The endurance of "The Daily Show" remains a testament to its creators, Madeline Smithberg and Lizz Winstead, who helped set the show's meticulously crafted tone. Salon spoke to Winstead recently via phone about the show's genesis, the grueling, pre-Google days of newsgathering and the "Daily Show" reunion benefit livestreaming this week.

This conversation has been lightly edited for length and clarity.

I think what made this different is that we didn't lampoon it; we became it. We really gave the audience credit. We didn't want to be cartoons. We wanted to, by being as realistic as possible, by looking like and having their same tone, by using the same bullsh*t that the media focused on, really shine a light on what it was that wrong with the media.

A lot of times, in previous iterations where there was a news desk, it was snarky commentary about the news. For us, we felt like the media itself needed to be a character. Back in 1996 when we launched, there was only CNN. We launched in mid-July. MSNBC launched a couple weeks later. [Note: MSNBC launched July 15, 1996]. Fox News launched in October. All of that happened in 1996.

When we started, we were really satirizing the whole if "If bleeds, it leads" local news stories, and also the fear-based news magazines. There were 17 news magazines on network television when we launched. They would all do,"Will your pasta kill you?" You know, everything was about terrifying the viewer and then finding obscure ways to tie it into a think piece and then put it out there in this supposition language. That was happening all over. You would look at the cover of a magazine and it would say, "Do you have AIDS?" Then there would be an article and it was just, "Of course you don't have AIDS." But they would just try to scare you. We really followed that trajectory. The show, when we launched it, was actually more like Colbert in the sense that every single person on the show was in character. We just took the audience on this newscast full of people who were utterly reprehensible on some level. You could see the essence of what you knew and what you saw every night in real news.

One of the reasons "The Daily Show" is 25 years old and has been going strong is because Brian Unger came from news, and trained every correspondent. He was the first correspondent we hired. He was a producer and he was an on-camera person. He trained everybody on how to light a shot, how to shoot to create a mood, how to deliver your lines. He really helped all of us learn how to go straight with the ridiculousness, so it sounded like you were delivering the news.

Was the show a hard sell to the public, as female creators?

To create a news show back in the day, and to do good satire, you had to satirize the existing thing. And the existing thing was full of white men. So as two women, the one thing we did know was that if we wanted to blow the lid off the news, it had to look like the news. That meant that the spaces that needed to get occupied needed to be white dudes, right? To this day — and this part is frustrating —I don't think a lot of people know that two women created that show.

I think that they also don't know that our two co-creators, executive producer, head writer, executive in charge of production, senior producer, all of field producers except for one, were all women. It was a bummer because we got over 150 writing submissions, and only two from women, when we launched.

It was a lot of fun, but it was also really challenging. Madeleine and I had to fight a lot of battles with the network because they didn't want this to be a news show. I think they wanted it to be wackier, and more pop culturey. I'm not sure that "The Daily Show" would have lasted 25 years if Madeleine and I would have acquiesced to turn it into some kind of "Entertainment Tonight" kind of comedy show.

When did you know that this was something? That this was a thing that people were paying attention to and that it was having an impact?

The second the show went on the air, I had a feeling. Then we got flooded with fan mail. Then there were so many requests that it was almost a year in advance to get tickets. That happened within like the first week. And that audience wanting to be part of it thing was really cool.

There was nothing else really quite like that out there to pin your conversations around, that was reflecting the way that we were talking about the news.

What gave us a great boost was broadcast news had just really done a disservice around real news. CNN was like "the trial of the century of the week." A lot of people were really wondering what the hell was going on in the world and not seeing it, and then watching the news. They knew the conventions.They knew the local news guy. They knew that scary story. They knew Stone Phillips. They had a working knowledge of the conventions. Within the subtleties of how we did our characters, we still made sure that the audience was with us on how we satirized the people and the genres and the type of stories that we did. So we didn't try to be too inside baseball. And you know, print journalists were so excited that we were sh*tting all over television journalism. They were writing glowing, glowing stories.

Was there a moment early on in it, where you had a story where you thought, "We're doing this story in a way that nobody else has looked at it?"

I think everything we did was sort of that. I mean, even "Weekend Update" never used footage. There was never a lot of designing over-the-shoulder graphics that looked like how they did on the news. We were the first to do that. Taking the trends of news genres, like, "When animals attack," then we did "When the elderly attack."

We really just satirized how they did the coverage, the terms, and how many times they're just throwing to somebody to say, "Over to you," when there was nothing going on there. Car chases. Storm watch. We were the first people to really take it to the next level and out into the field, and bring it back into the studio. Instead of it being skits, it was actually a fully formed show that had to operate like a newsroom, because we were making a news show, but we were satirizing it.

And remember, without Google. I think we stole a LexisNexis login. We had like 45 newspapers delivered to the office. People split up the country in regions, and they would just find stories. I think we had the AP wire. But it was digging around, and then just watching, and observing what the trends were, and then satirizing it.

The show came at a moment in the midst of the Clinton administration and post O.J., all these media circuses. Do you think that that was part of what made us ripe for the show, or was the show ripe for America?

I think it's what made the show ripe for America. The media had set the agenda for the circus. We didn't have to point out there was a circus; the circus was self-evident. The circus started after the first Gulf War. People forget that right when it was winding down, and everybody was panicking about how they were going to keep ratings going, Rodney King happened. So they were able to keep their media jones going, and then that just keeps perpetuating itself.They didn't even really learn good lessons in that. They just amplified the furious nature of the rage, instead of examining the rage. That should have been our reckoning.

Instead of what it's become, which is the model.

Then you had the baby-shaking nanny, and then the Menendez brothers, and then Anna Nicole Smith. It just became this furious churn factory. We just followed it. It was like, that's how you're going to help people? That's insanity to me. Part of what was fun was by holding a light up and becoming them, without having to hit somebody over the head to say, "Careful who you trust when you get information."

You've got a reunion event with Madeline Smithberg, Brian Unger and other "The Daily Show" originals. Tell me about the show.

The good news is, I really want to promote this special, because it's also benefiting Abortion Access Front, which is really cool. All these people are getting together to support us.

I really would love to make sure that people know that they can watch all these cool people get back together and tell the original story with stories they've never heard before. I'm really excited that this fall, we are launching a YouTube talk show — a 30-minute weekly hilarious feminist comedy talk show that's going to talk about all the issues that don't get talked about, and that is really doing deep dives into all these laws that are happening around reproductive access, and just patriarchy, and white supremacy, and with comedy and fun. That's called Feminist Buzzkills Live, and that's launching in October. That's one of the projects that we're working on with Abortion Access Front as well. I'm also going back out on the road to do a bunch of touring. People really need a catharsis and to gather. We need a 12-step program to get off Nextdoor. Just stop going online and getting weird information from your vaguely racist neighbors. Like, we need to regroup.

So, all eyes on the prize and in Washington, D.C. in the fall, on the Supreme Court, when they're going to decide the fate of abortion access as we know it in the United States. And that is pretty intense.