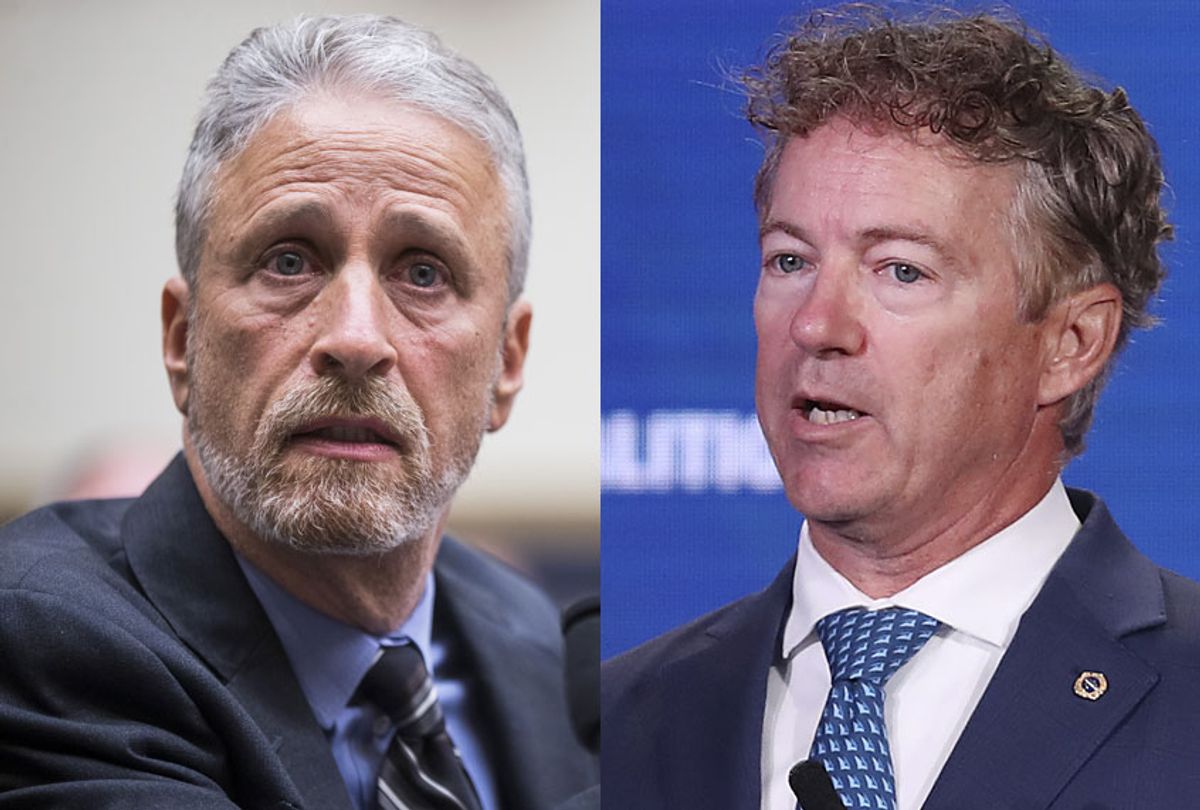 "It's absolutely outrageous, and pardon me if I'm not impressed in any way by Rand Paul's fiscal responsibility virtual signaling," Stewart told Fox News host Bret Baier on Wednesday. "Rand Paul presented tissue paper avoidance of the $1.5 trillion tax cut that added hundreds of billions of dollars to our deficit, and now he stands up at the last minute after 15 years of blood, sweat and tears from the 9/11 community to say that, 'It's all over now. Nw we're going to balance the budget on the backs of the 9/11 first responder community.'"

He added, "Bret this is about — what kind of a society do we have? At some point, we have to stand up to the people who have always stood up for us, and at this moment in time, maybe cannot stand up for themselves due to their illnesses and their injuries. And what Rand Paul did today on the Senate was outrageous. He is a guy that put us in hundreds of billions of dollars of debt. He was the 51st vote on that cut, and now he's going to tell us that $1 billion a year over 10 years is just too much for us to handle? You know, there's some things that they have no trouble putting on the credit card, but somehow when it comes to the 9/11 first responder community — the cops, the firefighters, the construction workers, the volunteers, the survivors — all of a sudden, 'Man, we got to go through this.'"

Paul was not alone in his efforts to block funding for first responders' health care from passing unanimously. He was joined by Sen. Mike Lee, R-Utah, who also said that he did not want the bill to pass without a vote, according to CNN. More attention was given to Paul, however, who thwarted Sen. Kirsten Gillibrand, D-N.Y., when she requested that the bill pass with unanimous consent so that it could bypass several steps that usually precede a bill's passage and receive a vote more swiftly.

"It has long been my feeling that we need to address our massive debt in this country. We have a $22 trillion debt. We're adding debt at about a trillion dollars a year, and therefore any new spending that we are approaching — any new program that's going to have the longevity of 70, 80 years — should be offset by cutting spending that's less valuable," Paul said regarding his move.

"We need to at the very least have this debate," he added. "I will be offering up an amendment if this bill should come to the floor, but until then I will object."

Stewart drew attention to Congress' neglect of 9/11 first responders in a viral video last month in which he scolded a Senate committee by saying, "I'm angry and you should be, too. There is not a person here — there is not an empty chair on that stage that didn't tweet out, 'Never forget the heroes of 9/11. Never forget their bravery. Never forget what they did — what they gave to this country.' Well, here they are!"

You can watch Stewart's appearance on Fox News here: