There is nothing funny about police violence. But Noah's satire exposes the racism and stupidity supporting it 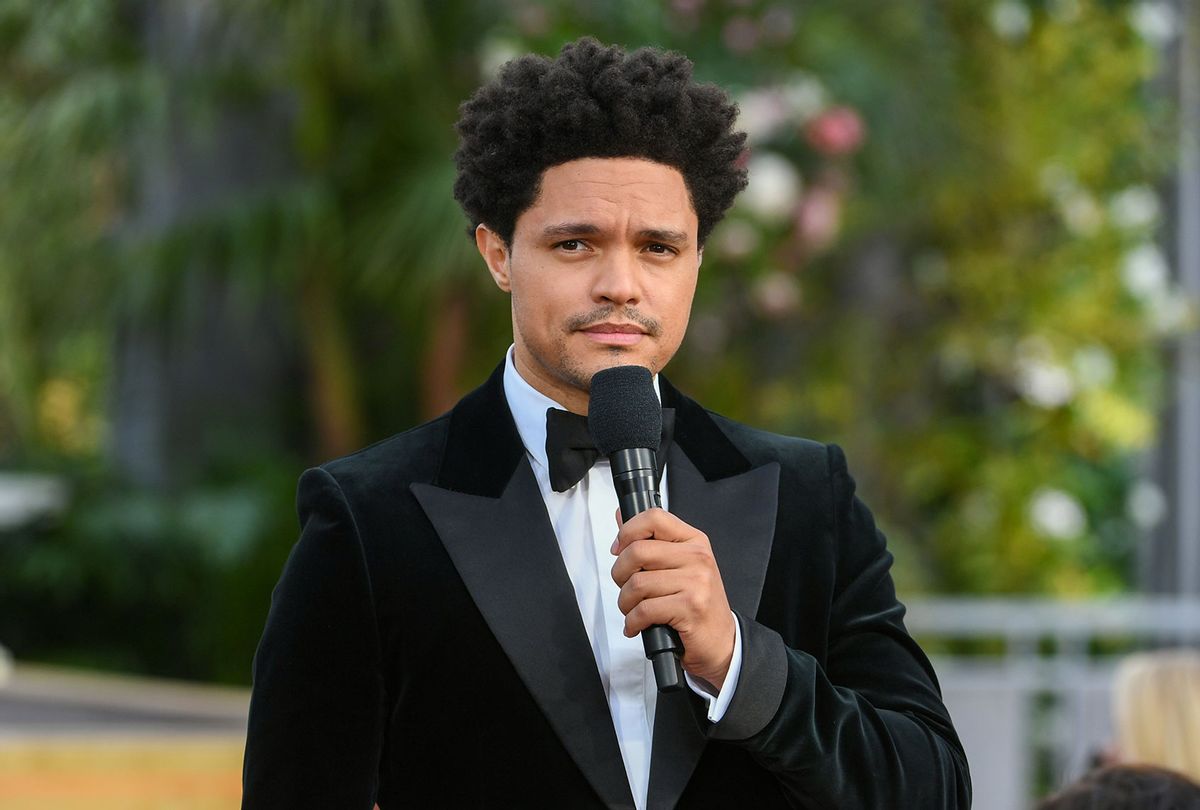 On June 12, 2020 Netflix released Dave Chappelle's "8:46," a standup show recorded in the wake of the death of George Floyd and subsequent protests. At the center of his monologue is the number 8:46, which at the time was thought to represent the amount of time that Derek Chauvin kneeled on George Floyd's neck. Chappelle explains that 8:46 has a personal reference for him: "I can't get that number out of my head because it was my time of birth on my birth certificate," Chappelle said. "I was born at 8:46 in the morning and they killed [Floyd] in eight minutes and 46 seconds."

The special went viral. It wasn't just the sharp, moving and insightful way that Chappelle described the death of George Floyd as both inconceivable and predictable; it was the basic outrage that Chappelle channeled in solidarity with protesters. Perhaps more importantly, the special stood out for the way that it did not use the signature, deadpan irony Chappelle famously tends to use when discussing race and racism. Noting the shift in his own tone, at one moment, Chappelle states, "This is not funny at all."

Buzzfeed noted that "Chappelle tends to be subdued, dispositionally cool and observant" when discussing race, making the way that "8:46" displays "the full height of his anger" even more powerful.

Chappelle's "8:46" was an important cultural moment in the Black Lives Matter movement: this is true not only because it was viewed almost 30 million times, but also because it reminded us how hard it has been for comedians to use their art to discuss racism and police violence.

The prevailing attitude is that Black Lives Matter supporters should be angry or somber or respectful or righteous, but not snarky or sarcastic. Sure, we had Michael Che's 2016 special, "Michael Che Matters," where he does an especially powerful bit on how ridiculous it is that some people bristle at the phrase "Black Lives Matter," but that pre-dated the death of George Floyd.

Protests around the world increased after that. The sheer gravity of how frequently police kill Black people has demanded a grave and determined call for justice, one that seems totally out of step with any sort of comedy. Some critics even took issue with the idea that protesters would have any fun whatsoever at BLM protests.

And that's where Trevor Noah comes in. Since he first took over for Jon Stewart as host of "The Daily Show," Noah has used his satirical wit to cover race relations in the United States, and his insight only grew sharper in the wake of George Floyd's death. What Noah does is use satirical wit, sarcasm and ironic commentary to show how most anti-BLM chatter is not just racist; it's also stupid. He dissects their arguments and shows that they literally make no sense whatsoever.

At the core of Noah's satire is his harpooning of white supremacist hypocrisy and the totally idiotic arguments those on the right make to support these views. The same year that Michael Che did his "Black Lives Matter" bit, Noah interviewed Tomi Lahren, then of the conservative outlet TheBlaze.

That interview offered deep insight into the very specific ways that Noah uses satire to dismantle right-wing critiques of Black Lives Matter. As Vox explained, "Noah interviewed Lahren less to argue with her views than to reveal them."

One of the real highlights of the interview was the moment when Lahren stated she didn't think Colin Kaepernick's decision to take a knee during the national anthem was "the right way" to send a message. This was the perfect opening for Noah, who then asked, "What is the right way, I've always wanted to know," Noah said gently, "for a Black person to get attention in America?"

As Lahren sat there and fluttered her eyelashes, it was clear that the unspoken answer was that there is no "right way."  It was also clear that the right-wing habit of claiming that the "real" problem is that protesters are just not protesting the right way — whether they are marching or taking a knee or organizing a rally — is really cover for their not-so-subtle racism.

Since that interview Noah has amassed a long list of similar interventions, all of which have in common the fact that he questions the premises and the core assumptions that ground most white supremacist ideology. It is a brilliant reminder of the special comedic charge of satire, which, in this case, is not after laughs but rather after using wit and reason to expose the faulty logic, BS and irrationality of those defending police violence.

Recently, for example, during the Chauvin trial, Noah posted a segment in which he asked where all the good apples on the police force are. Similar to his exchange with Lahren, he doesn't dispute the core idea that grounds the bigotry. In this case he concedes the point: OK, let's say there are "bad apples" on the police force. If that is true, he then muses, then logic suggests there have to be good apples. Where are they? After walking us through the fact that the stories of good apples simply don't line up with the bad apple theory, he then concludes, "We're not dealing with bad apples, we're dealing with a rotten tree."

In another signature Noah move, he went after the absurd excuse that the Minneapolis police gave in the wake of Daunte Wright's death on April 11, 2021. Using a similar WTF expression to that which Jon Stewart made famous, Noah began his monologue by pointing out the stupidity of the excuse given by the police:

"A man was killed at a traffic stop because the police officer mixed up their gun and their taser. Is that even supposed to be a legitimate excuse? Like, we're supposed to watch that and go, 'Ah, OK, one time I used sugar instead of salt so I can relate.' Look, I'm not saying that tragic mistakes will never happen, but what I am saying is that maybe if the police weren't so quick to draw any weapon then maybe people wouldn't die."

What Noah exposes here is the question we really should be asking: Why are cops constantly pulling weapons on Black people? But then he takes his satirical wit to an even smarter irony: Why is it that cops always think everyone else has guns in their hands, but don't seem to know when they actually have a gun in their own hand?

Noah remarked how ironic it was that BLM protesters had to hit the streets to protest yet another death of an unarmed Black man at the hands of the police at the exact same time that the murder trial for Chauvin was underway.

He then discussed the recent case of Second Lt. Caron Nazario, a Black and Latino U.S. Army officer, who was pepper sprayed by police while in uniform in Virginia. Noting that the man was holding up his hands and dressed in his fatigues, Noah asked, exactly what does a Black man have to do to not be harassed by the police — sing the national anthem while being arrested? In a tragic display of ironic wit, Noah exposes the basic idiocy of much white nationalism, which tends to value empty symbols more than the lives of fellow citizens. He suggests that cops would likely respect someone singing the anthem more than someone who defends the nation.

In the aftermath of Derek Chauvin's conviction, "The Daily Show" team posted a "If You Didn't Know, Now You Know" segment that focuses on "Being Black in America." The segment was perfectly timed to show that, as satisfying as the guilty verdict may be, police violence is only one part of the problem of racism in the United States. From unequal access to vaccines to housing to unemployment to mental health support to discrimination in corporate America, Noah's piece reveals the ongoing ways that U.S. culture is hostile to Black lives. Singling out the fact that many corporations think that tweeting in support of Black Lives Matter is enough, Noah makes it clear that if these corporations really think Black lives matter, they will do a better job in the workplace, from increasing hires to reducing microaggressions.

Going after the faulty logic of much white supremacist ideology is Noah's special skill. And this is why his comedy offers such an important complement to the Black Lives Matter movement. There is no question that the constant cases of police violence against Black people call for anger and energy and taking to the streets, but those well-founded emotional responses also need the biting insights of satire.

Real change needs not just trial convictions; it requires a shift in how these issues are discussed and debated and defended. And satire is exceptionally good at reframing narratives and exposing hypocrisy and hubris. By outwitting the stupid arguments that attempt to justify police violence, Noah helps offer his viewers a critical, cognitive defense that is an essential tool in the fight for Black Lives Matter.

Chauvin will be heading to prison for the murder of George Floyd, but we can be sure that the arguments used to defend his actions are not going away along with him. Luckily, we can count on Noah to keep using his ironic wit as the judge these racist ideas deserve.