Where are the "wine dads"? How gendered alcohol merchandise speaks to inequity in domestic labor 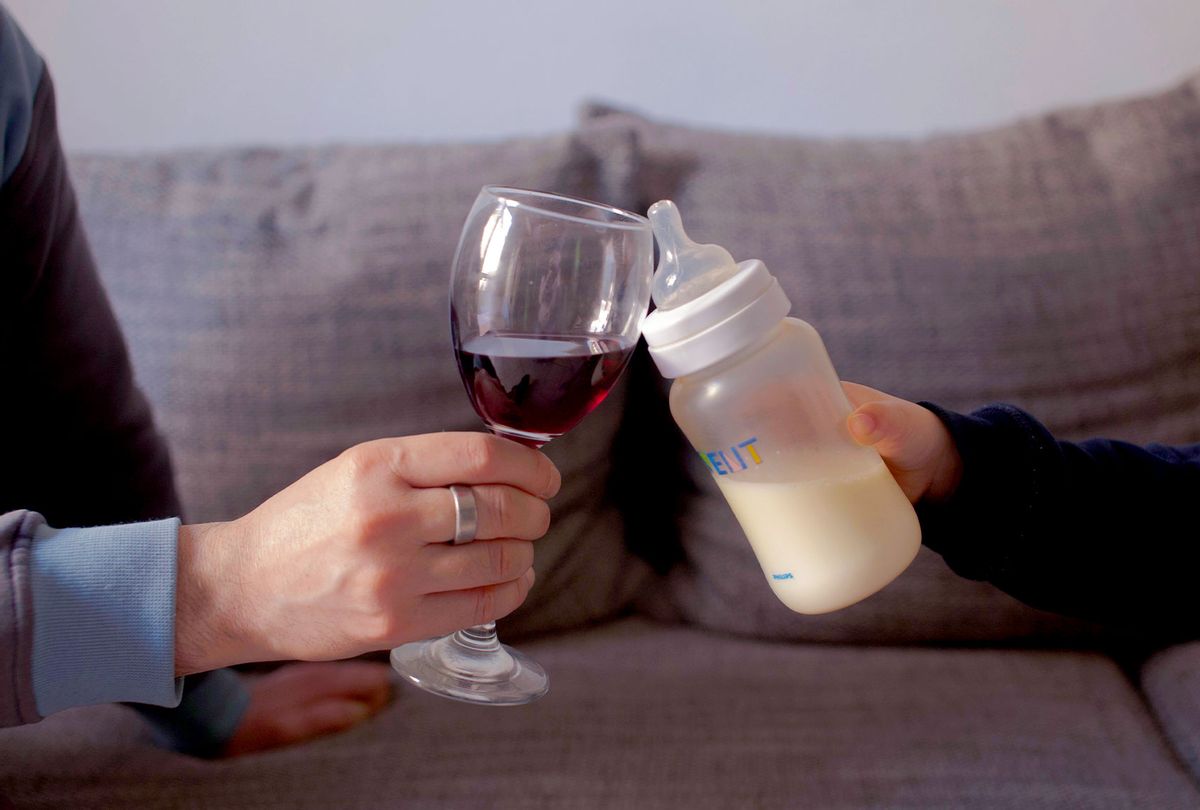 I'm not a mother, but I often find myself surrounded by "wine mom" merch. Really, we all do, whether we're paying attention or not. Tucked into the racks of suburban staples like Target and Kohl's are burgundy-hued T-shirts with slogans like "Mama needs wine" and "You whine, I wine." A few aisles over, there's likely an assortment of plastic wine tumblers with sippy cup lids, brushed with the phrase "Mommy Juice." (Recently, I saw a version of this cup that comes in a set with a smaller, plastic baby bottle labeled "Boob Juice.")

Retailers — from boutique home and partyware shops to big box liquor stores — profit from and perpetuate the trend. The term "wine mom" was itself popularized in the 2010s after the founding of the Facebook group "Moms Who Need Wine" quickly surged to a following of around 600,000 members.

There's been some pushback in the ensuing years, namely from public health and parenting experts who are concerned that diaper bags with wine bottle holders and sparkly "Bad Moms Club: Wine Provided" jacket patches could normalize high-risk drinking behavior. Meanwhile, some mothers simply decry the merchandise as basic or cringeworthy.

RELATED: From country music to "Kevin Can F**k Himself," the politics of pop culture's meat and potatoes man

However, its popularity endures. In December 2020, the term "wine mom" hit an all-time high in Google searches, ostensibly as a result of gift-givers shopping for frazzled pandemic mothers; when I plugged "wine mom" as a search term into Etsy, it returned 65,339 results.

According to KC Hysmith, a cookbook writer and food historian with a particular interest in gender and motherhood, the meming and merchandising of the phrase is "kind of a public acknowledgment that parenting is super hard."

"That's why it works," she says, "because even if you hate it, it's a little bit true for effectively all parents."

That said,  "wine dad" merchandise is basically nonexistent. It's a marked discrepancy I discovered while researching what I've come to call "wine mom" font — the loopy, hyper-feminine script that's similar to what Vox termed "bridesmaid font." For kicks, I googled the term in a variety of ways to see what would come up, and it was very much a "does not compute" situation.

Within the images, there were some photographs of older men dressed in cozy cardigans advertising a list of the most elegant wines for Father's Day. There was a bunch of "Disney Dad" merchandise that popped up, complete with the signature mouse ears logo — so I'm not quite sure what happened there. I was redirected to a single "Daddy needs Vodka" tote bag, and the one "Wine Dad" T-shirt that I stumbled across was modeled by a woman.

Those silly cups, T-shirts and home decor signs are actually clues to how domestic work — and its associated stresses — is assigned and valued. Put another way, the discrepancies in merchandise availability are actually a clue that points to enduring discrepancies in the division of parenting labor — something that has only come into clearer focus amid the novel coronavirus pandemic.

Despite having a long cultural history associated with men, male production labor and the male-dominated professions of wine grape grower and sommelier, Hysmith says "wine (and most importantly, the general concept of wine, rather than the specific varietal or vintage) is now largely considered a woman's drink."

That's apparent in the way that many wines are marketed, especially the varieties that can be found on supermarket and Target shelves, according to Andrea Hernandez, a food and beverage trend forecaster and founder of the immensely popular Snaxshot. However, the face of the "wine mom" is shifting.

"I'm definitely a '90s kid, and by the time Instagram arrived, I don't think I was even 21," Hernandez says. "But now, I have friends who are millennials who are having kids, and they want to go for the cute canned wines — the kind that look good in a photo grid."

There are brands (think Babe, Beach Juice, Pampelonne and Recess) whose packaging seems custom-made for filtered summer social media photos. They're in, Hernandez says, while bottles of Yellowtail and some less trendy boxed wines are out.

However, that doesn't mean the implications of the "wine mom" label — and associated merch — have shifted. As a mother who does enjoy wine at the end of a long day of parenting or dealing with the stress of academia (a world that isn't known for doing favors for mothers), Hysmith says she cringes reading the term but understands its appeal. Parenting is an exhausting endeavor, and embracing the "wine mom" moniker can serve as an exercise in self-deprecating humor or be used to signal solidarity and sympathy with other parents in the same boat.

"But there's the rub, it only applies to mothers, which is how so much of parenting already functions: along a gender divide," Hysmith says. "This divide exists in the food world, too, and wine is already part of the gendered stereotype of 'feminine foodways.' The fact that dads don't really get an alcoholic beverage label is likely due, in part, to the way we gender alcohol intake and the consumption of reward foods, the 'treats' we get for doing hard things: wine, chocolate, ice cream."

It's cliché, but merchandisers know the stereotypes around "treat foods" are universally recognized enough to sell T-shirts with slogans like "Chocolate, Wine, Ice Cream — Repeat" until the end of time. In pop culture, these food items are positioned as the proverbial carrots at the end of the stick for mothers; they're cute rewards for making it through another day of child-rearing, offered with a wink by a society that consistently undervalues the labor of primary caregivers.

However, these food items are benign and beloved enough that they are actually merchandisable as an identity signifier, unlike, say, valium, a commonly-prescribed benzodiazepine that became known as "mother's little helper." You might remember The Rolling Stones' 1966 song of the same name. One of the stanzas goes like this:

"Things are different today, " I hear every mother say

Cooking fresh food for her husband's just a drag

So she buys an instant cake, and she burns a frozen steak

And goes running for the shelter of her mother's little helper

And two help her on her way, get her through her busy day

According to music historian Nicholas Schaffner, the song was meant to point out the irony in the fact that as adult media "rant[ed] about teenage drug use . . . harried middle-aged housewives incapable of getting through the day or getting to sleep at night, without the help of their legally prescribed 'little yellow pills.'"  While things don't end well for the titular mother ("No more running for the shelter of a mother's little helper / They just helped you on your way, through your busy dying day"), the use of valium as a coping mechanism for American women remained a punchline for decades.

"I remember growing up as a kid in the '80s, and it was just so normal to have these jokes about how moms need to take a valium to deal with motherhood or to be a housewife," Jordan Shapiro, a psychologist and author of "Father Figure: How to Be a Feminist Dad," says.

He continues, "We've always acknowledged, on the one hand, that women and mothers are juggling so much, but then people sort of just shrug and say, 'You know, there's drugs or alcohol for that.'"

However, a "Valium Mommy" pill holder probably isn't going to sell as well as a "Wine Mommy" tumbler these days, though the sentiment is reminiscent of a 2021 "Saturday Night Live" sketch in which a woman (Aidy Bryant) is given a variety of kitschy home decor signs that get increasingly dark as her birthday party progresses. The first sign she's given is branded with the cheeky, "Wine gets better with age, I get better with wine."

By the end of the night, she's been given signs that say, "Hey barkeep, I wanna die tonight" and "I did 'dry' January. I never took a bath all January because I was always too hammered & I was worried I would slip under the surface of the water."

"At least in a modern consumerist society, it is pretty normal for us to use some kind of product as an identity badge," Shapiro says. "You could be an audiophile, and everything's caught up in the way you think about your hi-fi equipment. You could be a whiskey drinker, and you might put a bourbon sticker on the back of your car. That's normal."

As such, the bulk of the T-shirts and tote bags that are alcohol-themed and marketed to men display a pretty benign indication of enthusiasm. Think phrases like "Brew Bro" and "Support your local craft breweries: Drink local."

However, once you wade into the intersection of alcohol and fatherhood, the tone is a little different. You've got slogans like "If you can read this, bring me bourbon," "Shhh and bring dad a beer" and "You say beer belly, I say father figure."

Sure, there's some self-deprecating humor, but there's also a decidedly misogynistic "Bring me my cocktail and slippers" throwback vibe. (It's worth noting that the shirts for women have phrases like "Hey, Siri — or Alexa — bring me my wine," so the demand is being made of a virtual assistant instead of a husband or a child.)

"In the marketing of these items, there can almost be a notion of entitlement or privilege," Shapiro says. "Like, 'I should be allowed to have a hard drink at the end of a hard day.' It's not rebellious. It's not escapism. It's part of 'being a man.'"

While subtle, much of the messaging in the available merchandise inherently references traditional gender roles: Men have a hard day at the office, while women are homemakers. Pandemic lockdowns spotlighted some of the hidden labor that takes place in the home — a Brookings Institute report found that mothers spent twice as much time doing direct child care than fathers in two-parent households over the past year — but culturally, it hasn't changed.

"Responsibility for household food labor and food knowledge historically and statistically falls to women and mothers," Hysmith says. "What and how you feed your kids, your partner, and then ultimately yourself — which extends to how you look — is all part of a complex (and precarious!) gendered food landscape."

She adds, "This is perhaps why wine is sometimes called 'mommy juice.' A toddlerfied way to acknowledge the difficulties of motherhood without actually acknowledging the alcohol."

More stories by this author: