I cannot believe that brunch — a concept that, like Tucker Carlson, peaked in 1997 — is still a thing 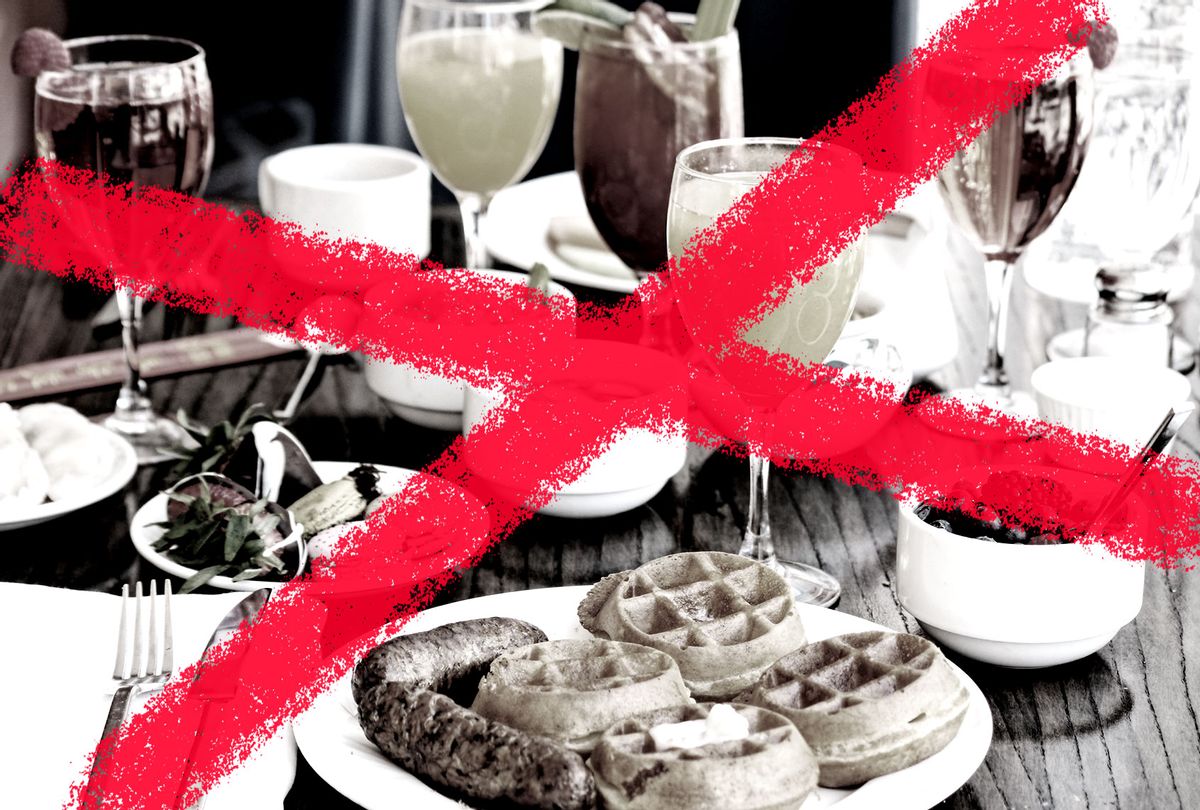 Here we are, tentatively peeking our heads out for what for many of us qualifies as an actual post-vax, post-mask holiday. Maybe gathering our families together for the first time in a long time, perhaps even inside a restaurant. You say you love your mom? Then don't you think she deserves better than brunch?

I can't believe that brunch — a concept that, like Tucker Carlson, peaked in 1997 — is still a thing. Brunch has been a bourgeois punchline forever, shorthand for a long wait for watered-down cocktails. In fact, it's been decades since Anthony Bourdain declared brunch just a restaurant business trick to move leftovers.

"The 'B' word is dreaded by all dedicated cooks," he claimed. "We hate the smell and spatter of omelets. We despise hollandaise, home fries, those pathetic fruit garnishes, and all the other cliché accompaniments designed to induce a credulous public into paying $12.95 for two eggs."

And yet, brunch persists. As the Washington Post observed in 2015, "Data from Google Trends show that search interest in brunch has been rising steadily since 2004 . . . Nothing, it seems, says 'Thanks, Mom' like a bottomless mimosa." Though searches for "brunch" understandably bottomed out last April, as we hurtle toward Mother's Day 2021, they're currently even higher than they were two years ago — and spiking toward their 2016 peak.

In recent years, brunch has enjoyed a kind of public rehabilitation. It's perhaps the most easily Instagrammable of meals, what with its high quotient of powdered sugar on berries. Writing in the New Yorker in 2018, Sadie Stein outright asked if we were done hating brunch yet, offering a telling insight. "I find the clichés of the form reassuring," she wrote. "I like eggs and coffee, I love a pastry basket and I enjoy the festivity of a weekend-only meal."

Perhaps brunch endures for the same reason that Starbucks endures. It's there, it's fine and it doesn't ask you to think too hard. That's a pretty low bar to celebrate the woman who raised you, though.

I understand the logic of brunch when you're young and a) hungover, b) waking up late with someone you're just getting to know. Weekdays may be made for granola bars in your car, but Saturday and Sunday are made for wearing sunglasses while you order waffles and Bloody Marias and wonder why you feel like throwing up. They are for that interlude between questioning where you left your underpants and that nap that you will awaken from, confused, after it's gotten dark out. But I ask, what part of any of this sounds like your mom?

Of course, brunch didn't start out as America's most staggered to meal, and the roots of its synonymity with Mother's Day are clear. Talking to NPR in 2015, Farha Ternikar, author of "Brunch: A History," revealed its feminist origins, explaining how it helped normalize the idea that "Americans didn't need to have three formal meals on Sunday anymore." For a busy homemaker, especially on church day, that was a welcome respite. And for going out on for her special day, Ternikar continued, "Mother's Day was about really treating your mom and giving her a break from domestic chores." It remains the busiest restaurant day of the year.

This is my biggest beef with brunch — this notion that it's an act of benevolence to take a woman out to a restaurant on the busiest restaurant day of the year. You know what moms get plenty of all day, every day? Chaos. Noise. Meals that have gone cold. You know what maybe they don't need? To be confined among strangers and subjected to noise, chaos and meals that have gone cold. Please, just give my table to the nice people over there who clearly forgot to wash their faces last night. I'm good.

There is, more now than ever, always the option of homemade brunch. What if mom just kicks back at home — or somebody else's home — and is waited on by her loving family? Slightly better, sure, but it doesn't mitigate the yawning abyss of a day with brunch plunked in the midst of it. The boredom of it. The pancakes in the middle of the day of it. The, "It's 3 p.m., now what?" of it. The orange juice and cheap champagne of it.

I love day drinking and hash browns, too. But as an adult human who wakes up early and hungry, there's nothing I want less these days than the mediocrity of a portmanteau meal. And it seems entirely unfair that fathers get cookouts and mothers get the gastronomic equivalent of a "Good Vibes Only" wall hanging. So in non-pandemic years, I've spent Mother's Day with my family at the bowling alley at Port Authority. There, I've been able to drink beer, eat wings and enjoy a few uncrowded hours in the lanes with my loved ones. This year, I'm thinking pizza and a spirited game of Parcheesi. Every mom is different, so why not tell us you love us in different ways? Preferably ones that don't involve frantic waiters . . . and aggressively garnished plates of eggs.