From country music to "Kevin Can F**k Himself," the politics of pop culture's meat and potatoes man 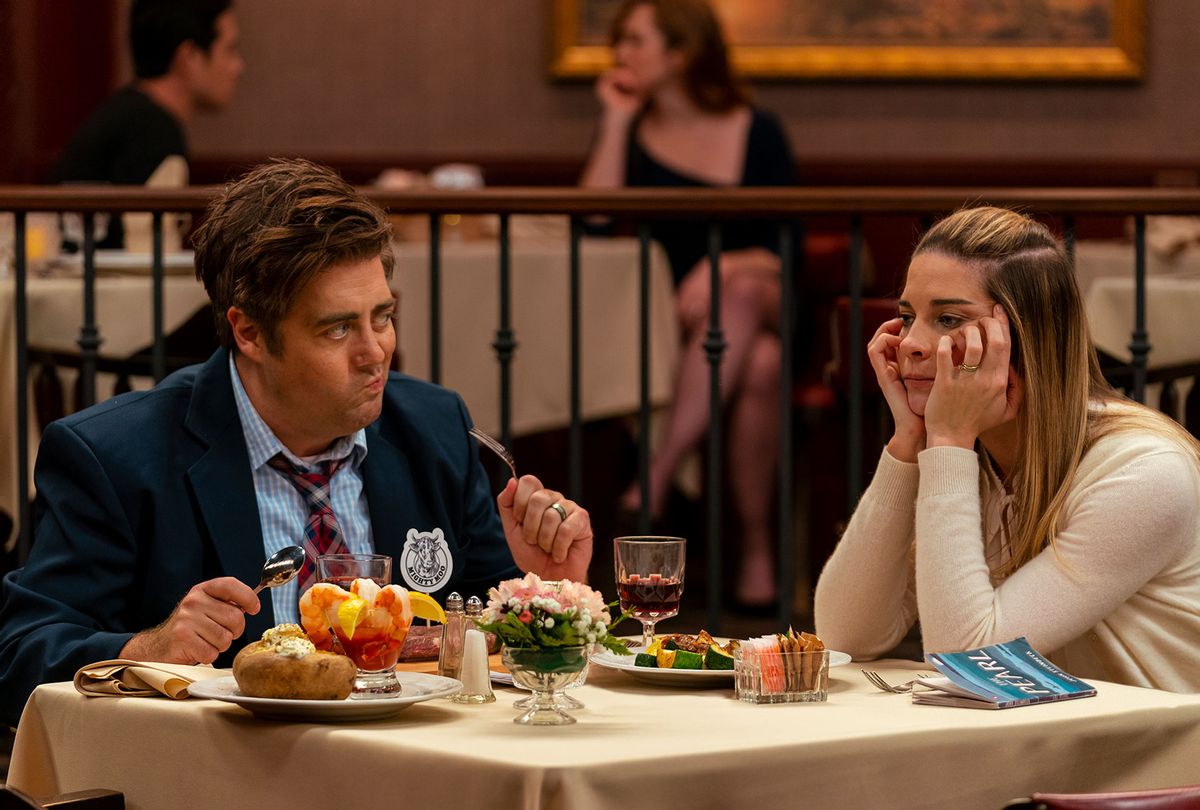 Kevin Can F**k Himself (Zach Dilgard/AMC)
--

In the most recent episode of "Kevin Can F**k Himself," AMC's dark dramedy about a housewife named Allison (Annie Murphy) who has had enough of her infuriatingly self-centered husband (Eric Peterson), it's Kevin's birthday. In typical sitcom fashion, Kevin has double-booked himself. He'll spend part of the evening with Allison at a fancy hotel restaurant, and occasionally duck across the street to an arcade where he and his goofy best friend will gorge on wings and play skee ball.

The idea is that neither party will know about Kevin's other engagement, and he will get by doing everything he wants to do. After all, he is the 30-something-year-old birthday boy, and in his universe, he's never had to make a sacrifice. He wasn't written that way.

Alas, there's a snag. When Kevin sits down in the dining room with Allison, he realizes that Sean Avery of the New York Rangers is at the table across from him. Moments after talk turns to Boston-versus-New York sports, Avery challenges Kevin to finish the Mighty Moo, a restaurant meal featuring a 32-ounce steak, two baked potatoes, all the fixings, a jumbo shrimp cocktail . . . and a roll.

Keep in mind, Kevin has dozens of appetizers waiting for him over at the arcade. But here's the thing: He commits — in front of God, Sean Avery and the citizens of Dorchester — to eating this comically oversized slab of meat and the accompanying potato, and his fragile ego hangs in the balance.

It may be that the creators of "Kevin Can F**k Himself" were simply satirizing the unbelievable bravado of sitcom husbands. If these characters have nothing else, they have the audacity. But the choice of meal is interesting here. When people talk about the "meat and potatoes" of an issue or item, they're referring to its ordinary but fundamental properties.

However, the "meat and potatoes man" is a trope and social shorthand that has long been pervasive in popular culture and politics — and speaks to a particular kind of masculinity bolstered by complicated, often idealized values like simplicity, wholesomeness and success.

In 2000, country star Alan Jackson released "Meat and Potatoes Man." The conceit of the song is simple; it's a melodic list of the things that he likes (hot women, cold beer, Wrangler jeans, cornbread, beans) and dislikes (the IRS, caviar, phony stars). The refrain is a self-aware shrug, of sorts: "It's just who I am, a meat and potato man."

On the surface, Jackson's song could be billed as an easygoing reflection on personal preferences, devoid of an agenda — he even lists "politics" as one of his dislikes — but there's an inherent dichotomy in the characters presented. There are the meat and potato men like Jackson, and then there are the "folks who dress their poodles like kids" and spend their evenings at sushi bars.

In contrast, those people are fussier and more frivolous, and there's ostensibly humor to be found in plumbing those differences. After all, they're the basis of almost every odd couple and stranger in town sitcom that's ever existed. Food has long been a striking, though easily understandable, lens through which to assess them.

Almost four decades prior to the debut of Jackson's song, the second season of "The Andy Griffith Show" was finding its rhythm. In the 1962 episode "Andy and Barney in the Big City," the pair, played by Andy Griffith and Don Knotts, leave the comforts of Mayberry to pursue a jewel thief in Raleigh. The swanky hotel dining room has a menu that's primarily in French, leaving them flustered.

Ever-pragmatic, Andy wants to flag down a waiter to ask some questions about what the words on the menu mean. Barney fears looking less than cosmopolitan, however, so he tries to convince Andy just to point something out and let fate decide his dinner.

"Nah, I don't like to gamble like that Barn," Andy responds. "Besides, a little plain talk never hurt anybody."

Andy summons a waiter and asks, "Have you got a nice steak on here somewheres?" They do, and he asks for a baked potato to accompany it. Barney opts to follow his own advice and points at two items on the menu. As the French waiter finishes jotting down their orders, he confirms their selections.

"Steak, baked potato and green beans," he says, looking at Andy. He turns to Barney: "Snails and brains."

The laugh track swells because, here, Barney is the rube and other cultures' foods are a punchline, much like when Alan Jackson proclaimed his disdain for sushi. In Barney's effort to look sophisticated, he made the wrong choice (at least in Andy's mind) and will pay for it when his food arrives.

"There's worse things than being a plain hick," Andy says to Barney. "Like being a hungry one."

"The Andy Griffith" show itself is both steeped in and perpetuates a certain type of nostalgic Americana where, as Gabe Bullard wrote in his "Bitter Southerner" piece "The Weird History of Hillbilly TV," the series' characters are "living in modern times, but they have a simplistic, wiser way of life achieved through a rejection of outside agitation — like, say, passing comedians — and inextricable from its rural setting."

In this case, the plate of meat and potatoes is emblematic of what, in that TV universe, is perceived to be some of the best facets of America: plain talk, honesty about what you want and the self-assuredness needed to get it. By ordering and consuming that dish, Andy embodies those characteristics as a man.

Also woven throughout the meat and potatoes man narrative is commentary about sustenance and strength. It's real food for real men — not the "rabbit food" that's reserved for ladies and lesser men. Pop culture has toyed with this belief in everything from children's movies — Disney released a collectible "Hercules" plate in 1997 that features the character flexing his giant biceps with the caption, "I'm a Meat and Potatoes Kind of Guy" — to dark comedies.

In Tig Notaro's 2015 series "One Mississippi," for instance, Tig's brother Remy (Noah Harpster) goes on a strict diet in order to lose some weight. While at a church potluck, the congregants, including Remy, stand for prayer before the meal, and his stomach audibly growls. A blonde woman named Desiree (Carly Jibson) smirks and proceeds to bring him a full plate of food when she spies him later picking at a salad.

"Lettuce? No wonder your stomach is growling," she coos. When he reveals that he's trying to lose weight, she further strokes his ego: "A diet? What on earth? You don't need that. You are a big, strong man."

Food and diet companies capitalize on the "big, strong man" flattery all the time. Hungry-Man Frozen Dinners (tagline: "Eat Like a Man"!) recently released a series of double meat bowls, one of which includes two Salisbury steak patties packed onto a bowl of mashed potatoes and gravy. When Charles Barkley appeared in a series of advertisements for Weight Watchers, he assured male viewers that they would still be able to eat "man food" while seeing results.

This exact conflation of meat and masculinity is also soundly interwoven throughout American politics. As a Texas Tribune assessment of the state's 2019 legislative session put it, when politicians promise they care about "meat and potato issues" on the campaign trail, they're trying to communicate that they prioritize the things that directly affect their constituents — not fussy "social and culture war issues." However, the people most impacted by those so-called social war issues — like the Texas "bathroom bill" that attempted to dictate which restroom transgender individuals could use — are members of marginalized communities. Put another way, they aren't the target market for "Hungry-Man Frozen Dinners."

Meat and potatoes masculinity is, however, perhaps slightly more subdued than straight-steak masculinity. For instance, the "carnivore diet" has become intensely popular among so-called men's rights activists. Created by Canadian psychologist Jordan Peterson, the diet was like extreme keto — only beef and water. When he appeared on the Joe Rogan Experience podcast in 2018, Peterson claimed that he'd lost 50 pounds and curtailed his depression and gum disease. In the wake of that appearance, he became something of a right-wing celebrity.

"Peterson is also particularly appealing to disaffected young men," Zack Beauchamp wrote for Vox. "He's become a lifestyle guru for men and boys who feel displaced by a world where white male privilege is under attack; his new best-selling book, '12 Rules for Life,' is explicitly pitched as a self-help manual, and he speaks emotionally of the impact his work has had on anxious, lost young men."

Whereas the carnivore diet appeals to men who feel that their masculinity is intensely under threat, meat and potatoes masculinity is more for men who feel like they have a lifelong membership card to the Good Ol' Boys Club. They're the kind of men who — as Alan Jackson sings — would describe themselves as apolitical while still benefiting from the age-old systems that allow them to be so.

It's the same system that the creators of "Kevin Can F**k Himself" are satirizing. As Allison dryly observes, everyone loves Kevin — no matter how backwards, petulant or ignorant he may be. That's why, when his Mighty Moo arrives, some viewers may hope that he chokes as he takes a bite — even if just momentarily.