The many betrayals of "Ted Lasso" 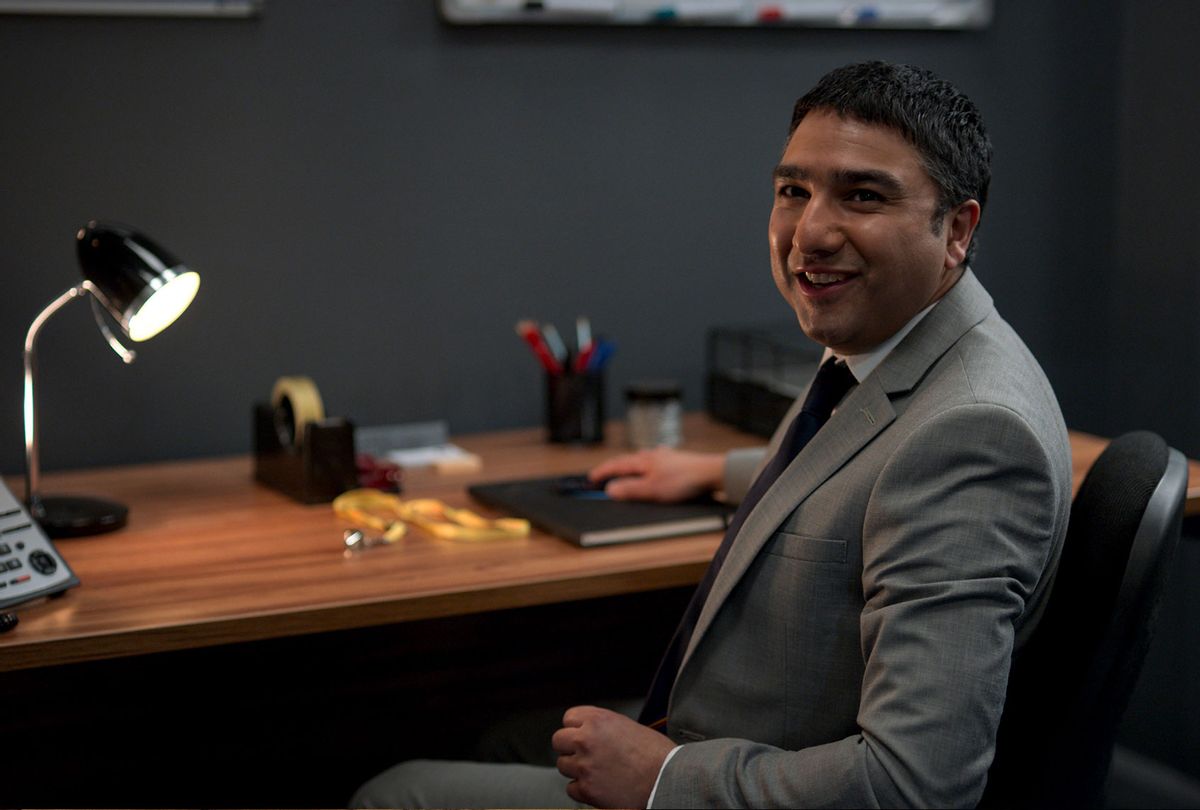 "Here we go again. Give Ted another idea he'll take all the credit for," Nate grouses in the latest heart-wrenching episode of  "Ted Lasso."

AFC Richmond assistant coach Nate Shelley (Nick Mohammed) has just sought out head coach Ted's (Jason Sudeikis) approval for a tactic called the "false nine," which would pull back strikers to midfield. As an American football coach who knows little to nothing about soccer, Ted agrees to try out the play in a routine brainstorming exchange. But the mood changes the moment Ted leaves the room, and Nate privately expresses his resentment with the statement above.

Since the beginning of this emotional second season of Apple TV+'s Emmy-winning comedy, former fan-favorite Nate has been going down what can really only be called "a path." The ex-kit manager was promoted to assistant coach, a role that has come with simultaneous feelings of gratitude and frustration when Nate perceives he isn't properly respected for his contributions . . . especially when it makes the ignorant American coach look good.

This downward spiral into insecurity and cruelty comes to a head in the last shocking moments of the episode, which is preceded by hints of Nate's true feelings.

It begins innocuously enough as fellow assistant coaches Roy Kent (Brett Goldstein) and Beard (Brendan Hunt) try to assure Nate that supporting Ted is part of their communtal job. Hell, it's in their titles to "assist." Undeterred, Nate voices a question he's possibly been pondering all season:

"You guys ever want to be in charge? You're the boss? Get all the credit?"

His coworkers both appear visibly uncomfortable, before Beard offers a charming response, comparing teamwork and collaboration in nature. "The forest is a socialist community, and trees work in harmony to share the sunlight," he says.

It's a nice thought, but it's clear that Nate is definitely not buying Beard's rosy views.

The next clue about what Nate feels he deserves occurs outside of work. While trying on suits with the team's marketing/PR manager Keeley (Juno Temple), they share an exchange about their mutual desires to lead empowered careers and "be the boss." As a former model, she is offering her fashion expertise and appears particularly excited when Nate dons an all-black suit, not unlike the attire that Keeley's own boyfriend Roy wears.

Keeley, who is receiving recognition from Vanity Fair as a "Powerful Woman on the Rise," perhaps inadvertently encourages Nate's ambition and scheming by hyping him up to do whatever it takes to be successful.

"People like you and I, we can't help but dream big," she says. "And no one is going to fight harder for their dreams than us, right? The scariest part of all of this is making the decision to go for it."

The next thing we know, Nate "goes for it." He kisses Keeley – a woman who is in a committed relationship  – without her consent. While she tries to awkwardly downplay the incident to make him feel better and less embarrassed, Nate returns to the dressing room and spits at his own reflection in disgust.

It's not the first time we've seen Nate malevolently gazing into a mirror this season. No matter what advice he's been given or what he wears, nothing seems to give him the ego boost he desires and make him the man he wants to see reflected. A black suit does not suddently transform him into the beloved Roy Kent, and "making himself big" in the mirror doesn't give him the confidence that team owner Rebecca (Hannah Waddington) naturally exudes.

That sad dressing room scene is the last time viewers see Nate in the episode. But his name comes up once more, in a crucial moment.

In the final mintues of the episode, Ted receives texts from The Independent journalist Trent Crimm (James Lance), who has been reporting on and following Richmond's progress under Coach Lasso from the beginning. Trent tips him off about an upcoming story he's publishing revealing that Ted's sudden absence from a game weeks earlier wasn't due to a stomach bug after all, but was in fact a panic attack.

And one last text: Nate leaked that information.

It's a devastating moment for "Ted Lasso" fans, drawn in by the show's abundant positivity and ragtag team that's presented as an extended family – sharing dating dilemmas, personal loss and even Christmas dinners away from home. This betrayal shatters that illusion, mostly invented by Ted himself, reminding us that the AFC Richmond Greyhounds are, at the end of the day, a business. This is how big businesses, and capitalism at large, operate, no matter how many "BELIEVE" posters the football club might hang on its walls.

Power-hungry, aspiring "bosses" like Nate will do what they usually do to acquire power: push others out of the way. After all, it's all he's known personally, having been relegated to the sidelines and as the butt of jokes for years before Ted finally recognized Nate's strategic smarts.

There's also a deeper message at play here. Nate seems to equate "being the boss," "fighting for your dreams," and "going for it" with hurting and taking something away from other people. In this episode alone, he seems set on taking Ted's coaching position and (unsuccessfully) attempts to steal Roy's girlfriend. Earlier in the season, we watch Nate consistently bully and disrespect the replacement kit man, owing to his own insecurities.

This is the attitude of someone who feels entitled but doesn't have what they want. If Nate isn't happy, he doesn't want to look in the mirror – literal or metaphorical. It's easier to believe someone else is at fault for his misery. Ted Lasso is getting all the attention, yet relies on everyone else for his winning plays and isn't reliable emotionally. In exposing Ted's mental health issues to the media, Nate can rationalize it to himself: What's a little violation of consent when it means that Nate can finally discredit his undeserving boss? And wouldn't Richmond be better off with someone more competent at the helm?

Then again, Nate's meteoric rise from cleaning cleats to being lauded for brilliant plays should have been expected to have growing pains. As many employees will attest to, answering to managers who know how to perform the duties of a job but not the interpersonal aspects – the actual managing of other people – can lead to toxic work environments. Nate knows soccer; he doesn't know coaching or managing. Therefore he doesn't recognize that he and the team are the beneficiaries of Ted Lasso's interpersonal skills if not his knowledge of the game. It's why he's angry every time someone points out his grey suit as the one Ted gave him; in Nate's mind, he owes Ted nothing. At the same time, Ted has been so caught up in his own issues that he doesn't see he's imperfectly prepared Nate for his new bump in status. Ted doesn't check in on anyone unless a perfomances on the pitch are affected. This man, who's more cheerleader and philosopher than strategic mastermind, has betrayed his responsibilities to Nate.

Nate's dark turn also speaks to a bigger issue with how "Ted Lasso" has thus far treated its relatively few characters of color — primarily as vehicles to advance white characters' stories and development. Richmond's beloved Sam (Toheeb Jimoh), a Black man, has a romantic relationship with Rebecca, which allows her to find a sense of identity after her disastrous marriage. And more recently, Dr. Sharon Fieldstone (Sarah Niles), a Black therapist, moves Ted's character forward from his unresolved grief.

Meanwhile, Nate started off as a shy, bumbling background character with self-esteem issues, frequently pulled in for comedic relief. Now, as of the end of this week's episode, he still has self-esteem issues, but they've twisted so that he's decisively become the show's villain as the instrument to knock Ted Lasso down.

Beyond the Nate of it all, the episode's cliffhanger revelation implies an additional betrayal. Specifically, Trent's text disclosing Nate as the not-so-anonymous source for the story is cringe for another reason: journalistic ethics. No matter what viewers (or even Trent) think about Nate's despicable actions or Ted's good nature, revealing an anonymous source is a breach of trust.

Television and movies seldom bother to accurately portray basic conventions of media and reporting (think: the journalists of political drama "House of Cards" often sleeping with sources). But on top of being a show with a significant and growing viewership, "Ted Lasso" has also impressed upon its audiences that Mr. Trent Crimm is a Very Serious journalist, which makes his behavior inexcusable. He's the one who's violated consent this time.

Public distrust of media is at an all-time high, and many consumers have little to no idea what reporting involving anonymous sources entails thanks to the lies of our last president. A popular television show depicting a presumably credible, respected journalist breaking rules and playing favorites with Coach Lasso almost certainly isn't going to help alleviate rampant media illiteracy.

Ultimately, for all the issues that go hand-in-hand with Nate's dark descent and his back-stabbing of Ted, the themes of his story are worth exploration by the show. It's an interesting and important concept: how a sudden influx of power can transform a deeply insecure person for the worse, and how businesses and companies that purport to be "families" are often anything but.

If "Ted Lasso" has previously been accused of toxic positivity and being out-of-touch with harsher realities, this episode and Nate's arc in particular, take us in an entirely new direction. Nate's betrayal of Ted may have felt shocking, but his change in demeanor has been a long time in the making this season. Starting shortly after he received an influx of attention and support on social media after a successful game, his eyes were at once glued to his name on Twitter. From then on, we watch as Nate's obsession with his image and status grows and grows. This is what society has impressed upon him as important, and as a result, he embraces Machiavellian ways.

Aside from this episode's eyebrow-raising writing of a character of color and misrepresentation of Journalism 101, it presents a compelling, relevant story from which we can all learn something. Nate is — among many things — a symbol of how capitalistic greed and thirst for individual fame and glory can tear teams apart from the inside.