OK "Ted Lasso" fans, time to have a conversation about our dear, wonderful Sam Obisanya

He's dreamy. He's single. He quotes great poets. And it bothers us that we don't know much else about him 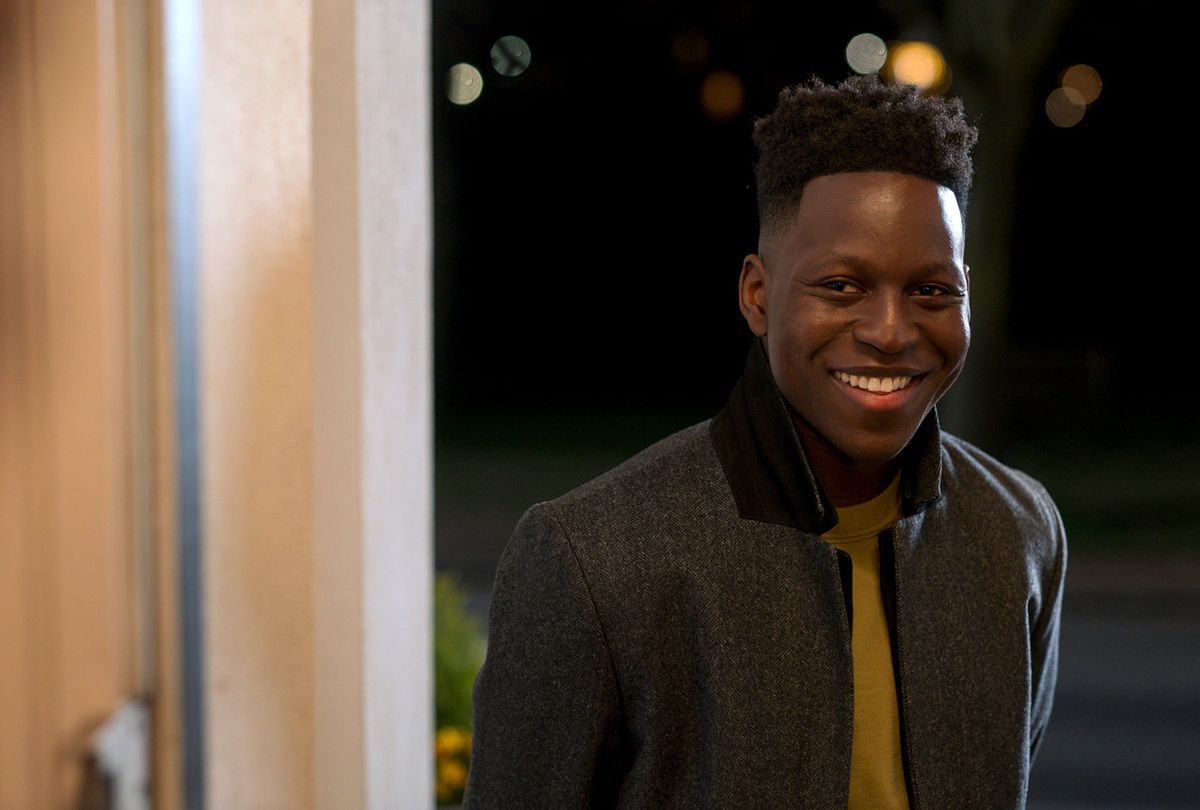 The following article contains spoilers from the second season of "Ted Lasso." Stop reading now if you're not caught up.

When we're fully in the flush of a new, deep romance we tend to find little wrong with our lover. Each utterance is pure poetry. Every step glides on silk. Their attention is ambrosia, their style flawless.

But it's only a matter of time before a friend plays the well-meaning killjoy by asking questions like, what does this guy really want? Does he have any lifelong friends, and what are they like? Is there something in his past or present that may inform how he'll behave once the lust wears off?

What we're getting at here is, how much do we really know about Sam Obisanya?

In case you're sensing the urge to defend the honor of that other Perfect Boyfriend on "Ted Lasso" – the one who isn't Roy Kent, but who Roy Kent respects enough to trust with his copy of "A Wrinkle in Time" – we're not trying to pick a fight here.

We love Sam. Honestly, we do. Look at most of the AFC Richmond football team: they're handsome, single and athletic. But they're also immature, unrefined, and as Jamie Tartt demonstrates, complete himbos.

Not our Sam. He quotes Rainer Maria Rilke, unironically claims "Ratatouille" as his favorite film and doesn't suffer from a chronic case of dumpster mouth. He's intellectually curious and emotionally intelligent, and he loves his parents – especially his father, whose loving support inspires Sam to maintain his integrity above all else. His earliest move in his second season arc was to reject a spokesperson opportunity with Dubai Airlines, Richmond's major financial sponsor, after his father shared that its parent company is destroying the environment in his homeland, Nigeria.

Sam led the team in a spur-of-the-moment protest, where the entire team played a game with tape placed over the Dubai Air logo on the their jerseys. His boss, Rebecca, could have had him fired. Instead, thanks to a technology-enabled courtship, the two end up in a fiery tryst she breaks off before it goes too far.

Rebecca lets him down ever so sweetly in the episode "No Weddings and a Funeral" when she whispers, "Sam . . . you're so kind and loving and wise. But . . . there's just this one issue that I can't get past." Here, the viewer is primed to predict their age gap is the problem – she's in her 40s, he's 21 – given that she's fretted about it with him and the few friends who know about their affair.

But while this show wrings pleasure out of the obvious, its emotional revelations are never arrived at so simply. "What is it?" Sam asks.

"You're wonderful," she whispers, and when he asks why this is bad thing, Rebecca tells him that he could really hurt her. To maximize the tragedy, this exchange takes place in a closet in Rebecca's childhood home right after her father's funeral, a highly vulnerable moment for anyone. But the scene is notable for its tight quarters, tight shots and low voices; it is strangely intimate, warm and achieves a balance between sadness and hope. And the only reason we're not utterly shattered is that Sam takes it well by being understanding, gently optimistic and implying, quietly, that he doesn't intend to give up.

People were supposed to fall in love with "Ted Lasso" in its second season, or more in love, provided you'd already tumbled for the show. Instead the Discourse (capitalization intentional) has been passionately mixed. The same sweetness that had people swooning in its arms during in first season became cloying  . . . to some  . . . in its second.

But Roy and Sam are the few subjects upon which many people agree. Contrasting those two, however, highlights the relative paucity of Sam's character development.

There are justifiable reasons for this that anyone can read on the series call sheet: Roy has been a major character since Season 1, and Brett Goldstein, who plays him, is also a writer on the show. Only one other character who is a player on the Richmond team, striker Jamie Tartt, is part of that rank.

Sam is a recurring figure who proved such an effective foil to Jamie that they bumped up his prominence in Season 2. And the man who makes the player so seductive, Toheeb Jimoh, imbues him with a divine blend of gentlemanly grace and a burgeoning youthful confidence.

Now, based on all of these descriptions one may be led to think Sam's character has been quite extensively developed. But most of what I've written has been mentioned by others in conversation or gleaned from close viewings of Sam exchanging texts or phone calls with his dad. It's only slightly more detail than the type of trivia one might find on a dating app like Bantr, inviting us to assign all types of fantasy assumptions that haven't borne out in the script.

But the difference between hanging charming details around a character's neck and writing layers into his personality that expand him from a minor role to a major one is the difference between knowing someone's address – which we do, courtesy of the eighth's episode's close – and spending time with them, in their space.

Ten episodes into the second season we've yet to do the latter or fundamentally know anything substantial about Sam beyond the playlists and reading material we'd encounter on his iPad, and how he behaves in the moment.

Understand, this is not a relationship deal-breaker with this show. Indeed, "Ted Lasso" deserves to be applauded for resisting the urge to heave all their weight into the flashback method favored by shows with large ensembles, as popularized by "Lost."

It's an effective, efficient means of spreading the audience's investment across multiple characters, but it has also been plowed into the ground, particularly after "Orange Is the New Black" pounded that narrative mechanism into scrap. We should be very glad this show hasn't gone there.

However, there are a few warning signs in the way the writers are building Sam up in our imaginations without adequately shoring up the character's foundation.

All of those qualities people love in Sam – his calm consideration, gentleness and perpetual optimism – flirt with some "White Lotus" version of an ideal African man. And it also underscores the ways that Sam is very often used as a device this season. Instead of assigning direct focus to his own growth, Sam's storyline becomes part of Jamie's redemption arc and Rebecca's healing process, and part of the reason Ted starts to recognize that his repressed feelings about his father's suicide may be behind his panic attacks.

Sam is, essentially, a good guy whose dad raised him right and cultivated in him a taste for reading and Disney's animation catalogue. But we don't know what scares him or gets him out of bed each day, any more than we know those things about Dani "Futbol is Life" Rojas or the team captain Isaac McAdoo, who moonlights as an a master barber and dispenses a scary version of tough love.

Calling this out in such a lovable character featured on a show I adore is painful.  But such thoughts wouldn't occur to me if Sam were allowed to be flawed and human as opposed to either a romantic magazine ad or a houseguest who guilelessly points out how Christmas reminds him of colonialism, in the same episode where his white host recoils at the thought of eating goat.

By the way, this is not necessarily indicative of a larger problem with the way the series looks at race (which, for the most part, it sidesteps) proven by the arcs for Sarah Niles' Dr. Sharon Fieldstone and Nick Mohammed's Nate Shelley. This is especially evident in Dr. Sharon's steady introduction, through which the writers display care in lending individual quirks and breathing true interiority into a character who could have easily become another TV trope.

But they successfully navigate around the-Black-woman-therapist-as-modern-wise-woman type by revealing her flaws, hinting she has a few unhealed wounds she bandages by skillfully tending to others.

Remembering how we came to embrace Niles' character is why our disappointment with Sam's present arc is simply that, as opposed to a reason to end things. That would be silly. There are far greater crimes than painting a gorgeous picture, the details of which could be played up by adding more shadow.

Then we remember that our relationship with "Ted Lasso" is still quite new. Another season is on its way, with additional pickups likely to be announced up thanks to its Emmys conquest in major comedy categories, including top prizes for the show and its star and co-creator Jason Sudeikis. That means the comedy should have many opportunities ahead to expand other stories, hopefully starting with Sam.

Even Sam knows he's worth the effort and wait, telling Rebecca before granting her the space she asks of him: "There's something I should warn you of: I'm only to going to get more wonderful." From his lips to the writers room, we hope he speaks the truth.