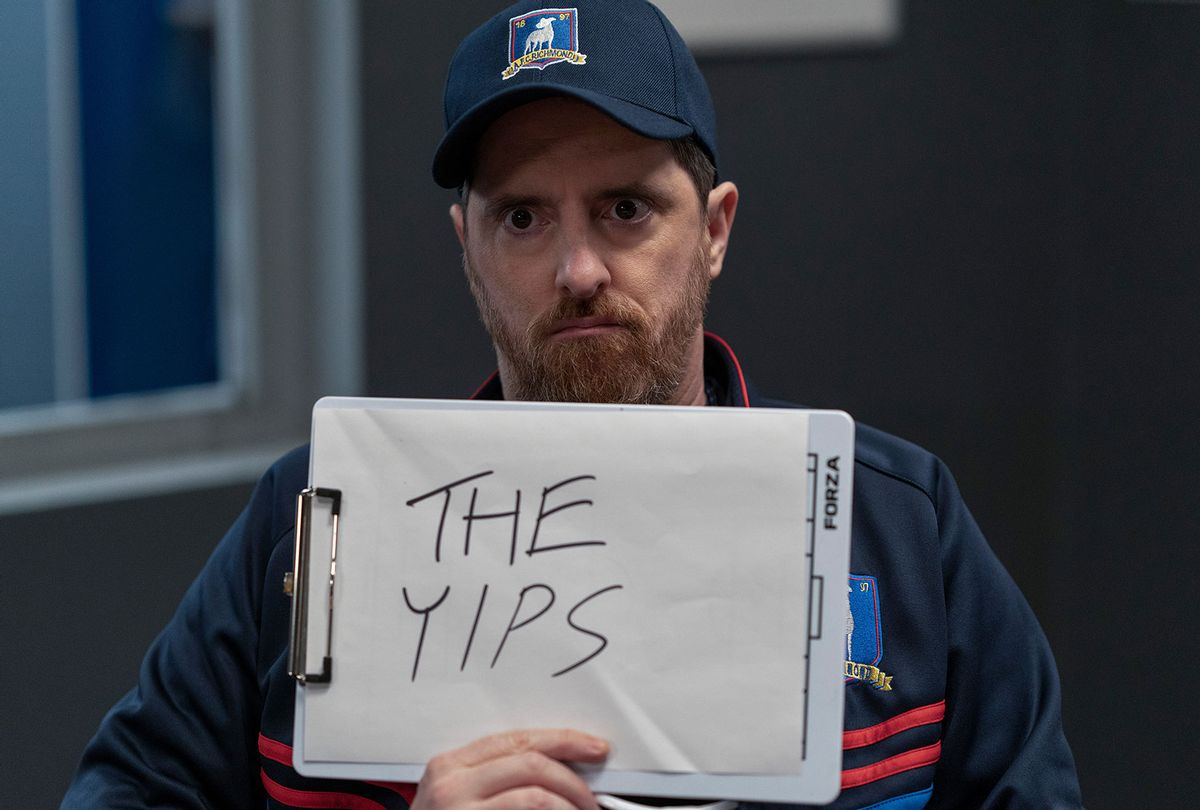 Mental health has center field placement in the second season of "Ted Lasso,"  starting with an issue highly relevant to USA gymnastics champion Simone Biles' decision to withdraw from the Tokyo Olympics competitions this past week: a condition known as the yips.

Maybe you're familiar with the term. Ted (played by Jason Sudeikis) and Coach Beard (Brendan Hunt) would insist that you refrain from reading it aloud. "It's like saying Macbeth in a theater or Voldemort at Hogwarts," he tells his British colleagues Higgins (Jeremy Swift) and Nathan (Nick Mohammed), when they ask for a definition.

Coach Beard breaks it down for them: "It's when just out of nowhere an athlete suddenly can't do the basic fundamentals of their sport."

The athlete to whom they're referring is AFC Richmond striker Dani Rojas (Cristo Fernández), who unravels after a high-pressure penalty kick derailed by a freak accident. His goal shot should have ended a streak of frustrating draws for Richmond. Instead the team's canine mascot leaps in the ball's way, and it hits the dog hard enough to kill it . . . in front of a stadium full of fans, no less.

Immediately Dani dims from a beacon positivity with supernatural accuracy to a gloomy, shambling pile of insecurities. Afterward, none of his kicks hit their targets. He can't even execute simple passes.

"Wow. We're watching the end of someone's career," Dani's unfiltered Dutch colleague observes during a miserable practice before other teammates chastise him.

Season 2 of "Ted Lasso" was written and filmed long before Biles experienced the gymnast's version of the yips, known as the twisties, and subsequently announced her choice to step off the mat for the rest of her team's competition in the 2020 Olympics summer games.

People who watch the types of sports that are broadcast on a regular basis are more familiar with the yips than the twisties because generally, we only gather to watch champion gymnasts compete every few years. However, people mainly associate the yips with uncharacteristically poor performance on fields or courts leading to errors and low scoring.

However the twisties, which involves a sudden loss of spatial awareness mid-air, can result in serious injury, possibly even death. Most of us heard about it for the first time after other athletes came forward to defend Biles from attacks accusing her of a weak mental fortitude, citing feats from past Olympic medalists as evidence that pushing through physical pain is what makes a champion a champion.

After witnessing the bitter invectives hurled at her for recognizing the warnings her brain and body were providing, I really wish that these episodes of "Ted Lasso" were more broadly available.

I don't say this with any Pollyanna-ish expectations that ignorant trolls taking shots at the Olympic champion might suddenly find their hearts growing three times normal size. That will never happen. My reason is simpler: I would like as many people are possible see Ted, Beard and sports psychologist Dr. Sharon Fieldstone (Sarah Niles) acknowledge that the yips are real, serious and require care to overcome.

For the many Higgins and Nathans out there who have never heard of such phenomena as the yips or the twisties and perhaps don't understand how serious they can be, the way the show processes Dani's tragic accident is illuminative.

So is how the writers do it, which says a lot about our national inclination to hang failure around the necks of athletes for refusing to break their bodies to thrill us.

Before hiring Dr. Sharon, Ted tries to help Dani with some good old American "walk it off" encouragement. "It's a tragic occurrence. A one-time thing!" he tells his player. "So let's get away from the bad mojo coming off of that penalty box and have some fun. Let's kick some corners!" From there he hands the kid a ball, and a distraught Dani boots it right into his coach's backside. This results in coaches and Higgins deciding that talk therapy is in order.

Nearly all American entertainment behaves as an extension of the tales we tell ourselves about our exceptionalism. Nowhere is this more assuredly perpetuated than in sports entertainment, whether in live events or documentaries.

Hence, one of the more widely circulated responses to Biles' withdrawal on social media was the archival broadcast clip of Kerri Strug's gold medal-winning vault in the 1996 Olympics, in which she lands on one foot before collapsing on the mat.

If you have Netflix, you can see other gymnasts place this moment into context in 2020's "Athlete A."

Like 2019's "At the Heart of Gold," "Athlete A" focuses on the decades-long pattern of predation by convicted and imprisoned sex offender Larry Nassar, the one-time USA Gymnastics doctor alleged to have sexually abused at least 265 women and girls, including United States national champions and Olympians such as Biles.

But the larger point it and other documentaries make about champion athletes is that uncompromising coaches such as Béla Károlyi and Márta Károlyi drill into them, and us, a mentality that getting hurt is part of the path to victory. Complaining is not allowed. Former Olympians speak about competing through fractured and broken bones.

As for Strug's extraordinary feat, "She'd been competing on a severe injury," says USA Gymnastics national champion Jennifer Sey, who watched the 1996 competition from her home. The archival footage shows Strug's face contorted in pain as she crawls off the mat, and we hear the announcer expressing concern her injury . . . until the score comes in. Then his focus on Strug's well-being dissolves into screams of glee at her gold medal victory for the United States.

"Everybody's cheering her on as this hero," Sey continues, "and all I could think was, why are we celebrating this? Don't pretend she had a choice. She was not going to do anything but go do that vault."

Sey doesn't present Strug's choice as some spiritual mandate to boost America's glory. She's referring to how the Károlyis would have reacted if she refused, lending a sinister tone to Béla Károlyi flatly telling a dazed Strug to "wave to the people" as he carries her off the floor. (Biles has said that one of the reasons she feels safe and supported enough to prioritize her mental and physical well-being is that her new coaches, Cecile and Laurent Landi, encourage her to do so.)

Other documentary series about champions, including Netflix's latest on Naomi Osaka and ESPN's "The Last Dance," are carefully polished stories of overcoming. Serena Williams' story follows her comeback after a childbirth experience that nearly killed her. Osaka's Netflix limited series mentions the toll her demanding career takes on her mental health without much in the way of her expressly explaining how that impacts her well-being.

I'm not saying that would have changed the negative reaction to her withdrawal from the French Open because of her discomfort with doing press – she's an introvert who battles depression, two concepts most people don't fully comprehend. Neither mixes well with public interaction, to say nothing of being a focal point of engaged attention. But like "Being Serena," it's more of a celebration of her greatness than an examination of what it means to be a famous introvert in a culture that loves you one day and relishes trying to take you down the next.

Michael Jordan confronts this in the seventh episode of "The Last Dance" as he recalls his 1993 retirement. Earlier in the same year he led the Chicago Bulls to their third consecutive NBA championship win, only to suffer through his father's murder a month after getting his ring. The press mourned with him . . . and soon began spinning conspiracies that his father's murder was somehow related to his gambling problem. Or printing circumspect stories that Jordan was secretly suspended by then-NBA commissioner David Stern.

Jordan explains that none of that was true. "I needed a break," he explains in his present-day interview. "My father just passed, and I retired."

"The Last Dance" transcends the expectations of the standard sports documentary treatment because Jordan doesn't try to be anything more than human. The journalists who cover him remind us time and again how weighed down and exhausted he was, even in his prime. His retirement was a refusal to cater to the expectation that he play through the pain. People respected that decision because he's Michael Jordan.

Serena Williams, Naomi Osaka and Simone Biles are saddled with the dual taxes of womanhood and Blackness; we expect them to excel beyond what we think is possible and criticize their lack of gratitude when they say they've had enough. The good news in Biles' case, and Osaka's before her, is that nowadays more people understand the necessity of protecting one's mental health.

But they and we still don't exist in a "Ted Lasso" kind of world.

Much of what occurs in that show would not happen so easily in real life, if at all, which is the point. Sudeikis, Hunt and their fellow writers present an aspirational view of the world as we and they wish it were. Therefore we'll never, ever see Dani or other non-white players be subjected to death threats or racist taunts for mistakes made during games. We wouldn't want to.

This is a world that runs on understanding and forgiveness, another way that it is far less concerned about the intricacies of soccer – or football – than exploring what makes the people who play it tick.

"The yips are not a superstition," Dr. Sharon tells Ted and Coach Beard in response to their attempt to write off Dani's state as some kind of hoodoo. "They are a mental condition, one that can be fixed with discipline, not denial."

Dani recovers, but not alone and with ample care. Dr. Sharon speaks to him in his native language and gets him back on his feet. Other players witness the success she has with Dani and line up for counseling sessions by choice, not by force. Watch closely, America. We could stand for more of this to be put into practice in our games, and in life.

New episodes of "Ted Lasso" stream Fridays on Apple TV+. "The Last Dance," "Naomi Osaka" and "Athlete A" are streaming on Netflix. "Being Serena" and "At the Heart of Gold" are available to stream on HBO Max.