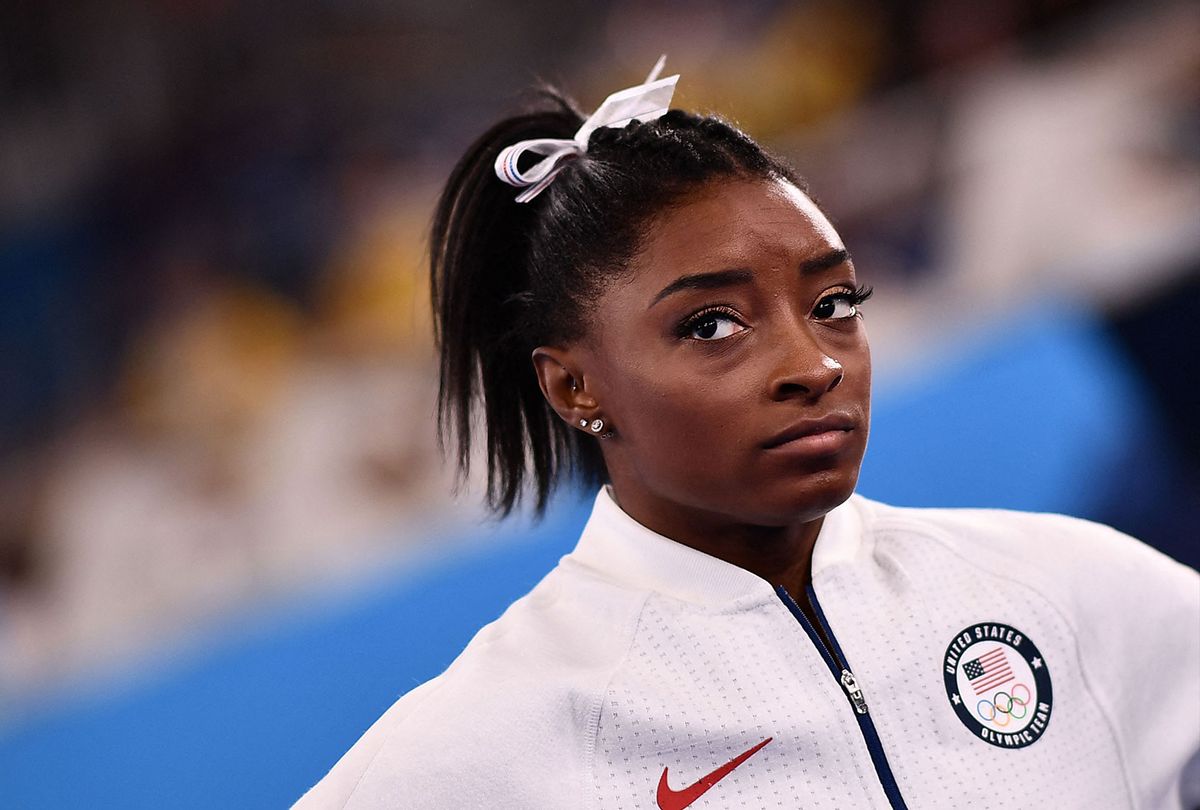 USA's Simone Biles at the Tokyo 2020 Olympic Games at the Ariake Gymnastics Centre in Tokyo on July 27, 2021. (LOIC VENANCE/AFP via Getty Images)
--

American gymnast Simone Biles is withdrawing from the individual all-around competition at the Tokyo Olympic Games. Biles did so after putting in a disappointing performance and, in her own words from earlier this week, realizing that she needs to focus on her mental health.

"I have to focus on my mental health and not jeopardize my health and well-being," Biles explained. "It just sucks when you're fighting with your own head."

In the past, it would have been difficult to imagine anyone competing in the "toughness is its own reward" culture of athletics and openly taking time off for mental health reasons. When NFL quarterback Kerry Collins benched himself in 1998 because he realized his mental health issues were inhibiting his ability to play (he later admitted to struggling with alcoholism), the press reacted with befuddlement. The stigmas associated with mental health are not limited to sports: In 1972, Democratic vice presidential candidate Thomas Eagleton was revealed to have been hospitalized multiple times for depression and even received electroshock therapy. The news was a death sentence for the Democratic national ticket that year — even after Eagleton was replaced.

Thankfully, there are already signs that our culture is becoming more informed and progressive in its views on mental health. This was recently demonstrated by the ongoing movement to liberate pop star Britney Spears from an allegedly oppressive conservatorship, one that she entered after suffering from public mental health issues in 2008. For many years, Spears' breakdown was the butt of jokes, mocked everywhere from tabloid magazines to popular movies like "Meet the Spartans." Over time, however, attitudes toward mental illness have evolved. And as that has happened, the public began to question the assumption that someone with a mental illness automatically should lose basic freedoms.

Biles, thankfully, is receiving a somewhat healthier public response than what Spears, Eagleton and Collins faced in years past. HuffPost senior wellness editor Lindsay Holmes, for instance, tweeted, "No one would bat an eye if Simone Biles had to leave the Olympics because of a broken ankle. There should be no line drawn between a 'mental' or 'physical' health issue. They're the same and they should be treated like it." Chirlane McCray, New York City's First Lady and a mental health advocate, posted on Twitter that "mental health challenges are a part of the human condition and can't be ignored. I am proud of [Simone Biles] for showing the world you can prioritize your mental well-being above all else — even at the Olympics. You are a champion Simone, in so many ways, and we love you!"

"I'm glad that there's athletes willing to talk about the mental aspect of sports," sportscaster Dan Patrick told his audience. Dr. John Whyte, the chief medical officer at WebMD, offered his appreciation: "Thank you #SimoneBiles for reminding us there is no physical health without mental health. #mentalhealth," he tweeted. Rep. Cori Bush, D-Mo., tweeted that she stands by Biles and Naomi Osaka, who withdrew from the French Open in May after officials would not allow her to protect her mental health by skipping press conferences.

"Your health and peace matters," Bush wrote. "You're reminding Black women that we can take the space we need for ourselves."

Given the culture war in the United States today, which consigns everything and everyone to one of the two sides of the political aisle, it is not surprising that Biles' announcement was not received with universal equanimity. Indeed, Biles has been outspoken in her criticism of former president Donald Trump and support for Black Lives Matter, and thus many right-wing types view her as an indelible line on their bulleted list of irredeemable public enemies. "Football players risk severe physical injury every time they take the field," conservative commentator Matt Walsh tweeted. "You people are desperately trying to justify an Olympic athlete quitting on her team, and your arguments get dumber by the second. Just cut your losses here." Breitbart's Joel Pollak rhetorically posed: "How about the mental health of the gymnast who missed the Olympics by one spot before Simone Biles decided this was the time to take a mental health break?"

There are unique pressures facing black athletes that adversely impact their mental health, as Salon's Kylie Cheung wrote after Osaka withdrew from the French Open. Cheung points out as example the racist epithets hurled at NBA players, writing, "this mistreatment of basketball players by fans may seem separate from the French Open rules that pushed Osaka out of the tournament, but it's not. Rather, it's an extension of the same, dehumanizing sports culture that often treats disproportionately Black athletes as objects of entertainment that owe media and racist fans unlimited access to their performances."