The creator/star of HBO's "I May Destroy You" became the first Black woman ever to win Best Writing, Limited Series 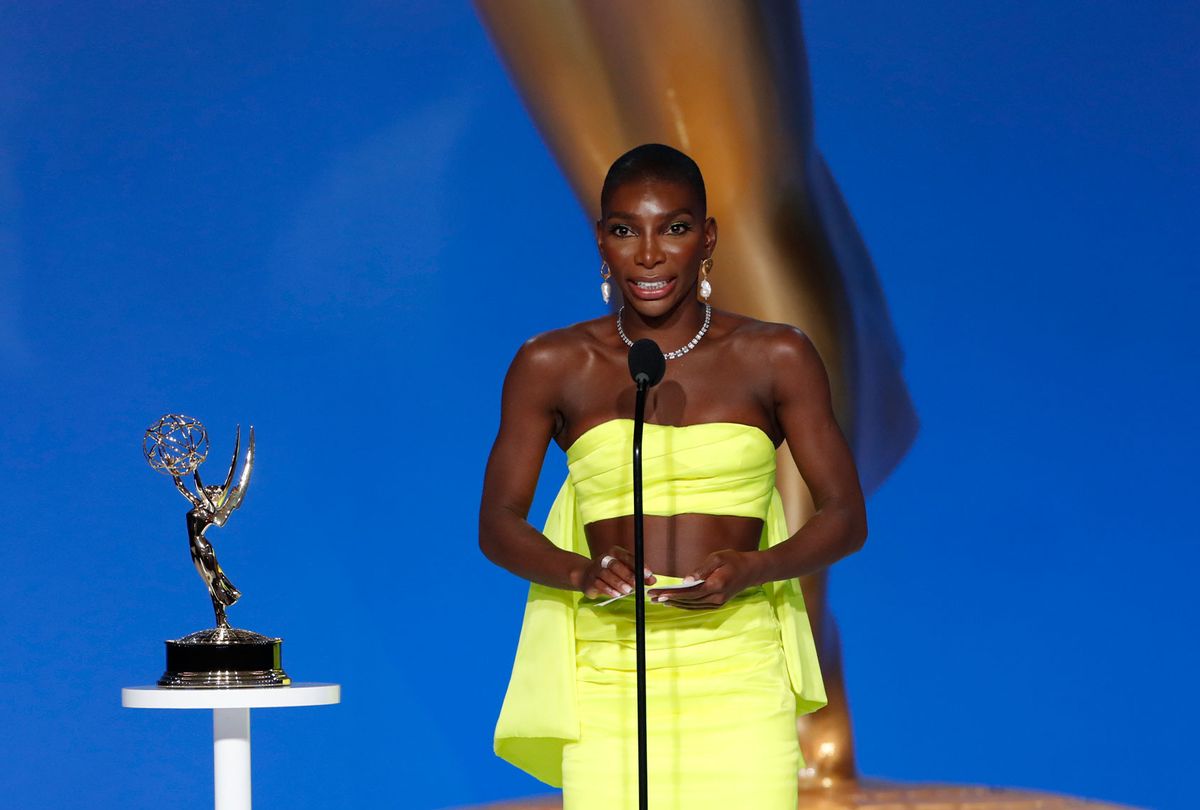 At Sunday night's 73rd Primetime Emmy Awards ceremony, Michaela Coel made Emmys history. The creator, writer and star of HBO's "I May Destroy You" became the first Black woman ever to take home the top honor in the Writing for a Limited Series category, besting Scott Frank (Netflix's "The Queen's Gambit"), Brad Ingelsby (HBO's "Mare of Easttown") and the Disney+ "WandaVision" nominee slate of Chuck Hayward, Peter Cameron, Jac Schaeffer and Laura Donney. When Coel took the stage she unfolded a small piece of paper and shared her acceptance speech.

"I just wrote a little something for writers, really: Write the tale that scares you, that makes you feel uncertain, that isn't comfortable. I dare you," she said. "In a world that entices us to browse through the lives of others to help us better determine how we feel about ourselves, and to in turn feel the need to be constantly visible – for visibility these days seems to somehow equate to success – do not be afraid to disappear from it, from us, for a while, and see what comes to you in the silence."

She finished by dedicating her limited series to sexual assault survivors. In total, her speech lasted 53 seconds.

Pointing that out is relevant, because Coel's win followed that of Scott Frank, who directed "The Queen's Gambit," and Governors Award winner Debbie Allen.

Allen is an actor, producer, director and choreographer who has been working in the industry for more than 30 years and has five Emmys, a Golden Globe and is a Kennedy Center nominee. She accomplished all of this while overcoming racism and sexism in the industry.

Thus, when producers started signaling her to wrap up her speech just as she was warming up, and Allen declared, "Honey, turn that clock off, I ain't paying no attention to it. Turn it off, turn it off!" the room erupted in cheers. Few have earned their right to speak to the industry without a time limit, because it is understood that those people treat such moments as precious and use them well.

Allen is one of them. She spoke for two minutes and 50 seconds about the courage it took to be the only woman in the room on most occasions, to keep going, and on top of that, to bring other people with her.

Frank came to the stage with a detailed two-page peroration and zero intention of editing what he had to say. The rest of the winners mostly adhered to time constraints, joking about being played off while dashing through their list of thanks. Not this director. Strains of Andrea Bocelli's "Time To Say Goodbye" came up multiple times, once quite loudly, but Frank kept talking for a total of three minutes and 28 seconds. Nobody cut his mic.

To quote comedy performer and writer Keisha Zollar's observation, the contrast of these three speeches, and the fact that a white male director was allowed to go as long as he wanted while women winners cut their speeches short, sent some fascinating signals about "who takes up an appropriate amount of space, who could take more and who just TAKES" in the TV industry.

And it goes quite a distance in explaining how and why, in a pandemic year when TV became more central to our lives than ever and hundreds of shows were put in front of us, Television Academy voters honored 12 shows in 27 Emmy categories, according to fellow TV writer Rick Porter. Twelve. Out of those, only one individual Emmy award went to a person of color. That would be Coel.

The triumphs of "Ted Lasso," "The Crown," "Mare of Easttown" and "Hacks" are worth of celebrating, mind you. Each won big at this year's Emmys, with "Ted Lasso" earning Apple TV+ four awards on Sunday including the statue for outstanding comedy series, a best comedy actor win for Jason Sudeikis, and supporting actor victories for Brett Goldstein and Hannah Waddingham.

The complete sweep in the top drama categories by Netflix's "The Crown" is more telling, though. This show has 21 Emmy wins, including the seven it netted Sunday for outstanding drama, best actress in a drama for Olivia Colman, a best actor win for Josh O'Connor, and individual supporting performance wins for Gillian Anderson and Tobias Menzies, another writing Emmy for Peter Morgan and a directing win for Jessica Hobbs.

HBO's "Mare of Easttown" duked it out with "The Queen's Gambit" among the limited series categories, with the Netflix show taking home the top prize and "Mare" herself, Kate Winslet, winning best actress. Co-stars Juliann Nicholson and Evan Peters scored hardware in their respective supporting actor races.

For that matter, the majority of Peters' competition for supporting actor in a drama came from people of color, including "Hamilton" stars Daveed Diggs, Lin-Manuel Miranda and Anthony Ramos, and Paapa Essiedu from "I May Destroy You."

These are among the categories hailed in post-nominations round-ups as reason to be hopeful about the Emmys diversifying its choices. The Hollywood Reporter calculated that 44 percent of the acting nominations and at least half of the nominations in the lead drama actor and actress races went to performers of color.

When it comes to selecting winners, however, voters' tendency to gravitate toward familiar titles showed up in force, shutting out outstanding work from non-white performers and series centering them. "Ted Lasso" is an inclusively cast show, but only one of the main leads isn't white — and among all the actors nominated, Nick Mohammed went in as the underdog.

"The Amber Ruffin Show" also was longshot in a category that includes 23-time Emmy winner "Last Week Tonight with John Oliver." But the highly acclaimed "A Black Lady Sketch Show" had a one-in-two chance of winning in the Variety Sketch category and still lost to 81-time Emmy winner "Saturday Night Live." Award show voters tend to reward previous victors, but even that is absolutely ridiculous.

It also means that when the Academy's largely white voting body had the option to select winners that didn't fit the status quo of white actors they know, they went with the folks who look like them. No offense to Colman, but not even she expected to win her category. (She also gets points for giving a bleeped shout-out to her fellow Brit with "Michaela Coel, f**k yeah!") Voters could have rewarded Porter's work in the best actor race; instead they went with the British guy who did a solid but not exactly unforgettable job of playing Prince Charles.

Set all of this against an awards telecast hosted by "The Neighborhood" star Cedric the Entertainer, co-executive produced by Reginald Hudlin and featuring Reggie Watts as its DJ and MC Lyte as the announcer, and the dissonance escalates. The comic's pre-recorded skits were duds, but he did a fine job in his live bits, although about half of his monologue probably lost many of CBS' regular viewers who bothered to tune in.

Cedric the Entertainer may not have presented a watertight case that hosted telecasts are better than ones that forgo an anchor, but he didn't entirely bomb either. Between the lighthearted Emmys-themed sing-along to the late Biz Markie's "Just a Friend" and an understated In Memoriam whose acoustic performance by Leon Bridges and Jon Batiste hit all the right notes, the production fit the intimacy of this year's setting.

Some — OK, Seth Rogen — would say it was too close. "There's way too many of us in this little room. What are we doing?" Rogen said in his bit. "They said this was outdoors. It's not! They lied to us! We're in a hermetically sealed tent right now!"

But a tent is a tent, including one staged at the L.A. Live events deck. Some are much more expansive than others, metaphorically speaking. Some claim to be open for political purposes while still being shaped by the same people who have been responsible for limiting who we see and which stories they'll tell for decades now.

So women who won, including Smart, acknowledged they're being played off. The "Hacks" creators joked about it but ultimately conceded their time at the podium. But Frank, a man most people have never heard of, just kept talking. And talking. Occasionally he'd look up with a dismissive wave of his hand and say, "Really? No," or "Seriously? Stop the music," as if being played off were a new concept.

Later "Queen's Gambit" executive producer William Horberg praised star Anya Taylor-Joy with "you brought the sexy back to chess," moments before declaring, "patriarchy has no defense against our queens." Not once did we hear Taylor-Joy speak. What was that about the patriarchy again?

Sunday's telecast lasted three hours and 14 minutes, and most of it was the furthest thing from uncertain and uncomfortable.

Still, Coel proves it's possible to speak powerfully and convey gratitude a very short amount of time, taking up a concise amount of space when she could have taken up more. Allen and anyone receiving accolades for decades worth of work in the industry and service to her community deserves to go long; she took up an appropriate amount of space by uplifting with her words and committing to inspire.

Speaking to women and young people across the country and the world, she said, "It's time for you to claim your power, claim your voice, sing your songs, tell your stories," she said. "It will make us a better place. Your turn."

With any luck the voters and future Emmy telecast producers will take those words to heart when the work of the people to whom she's speaking shows up in front of them. But if this year's outcomes and displays of entitlement are any indication, we have a long way to go before the gatekeepers genuinely commit to stepping back from the mic to applaud others striving to be seen and be heard.