The profoundly heartbreaking, astonishing and gorgeous conclusion ends the series where Michaela Coel needs to be 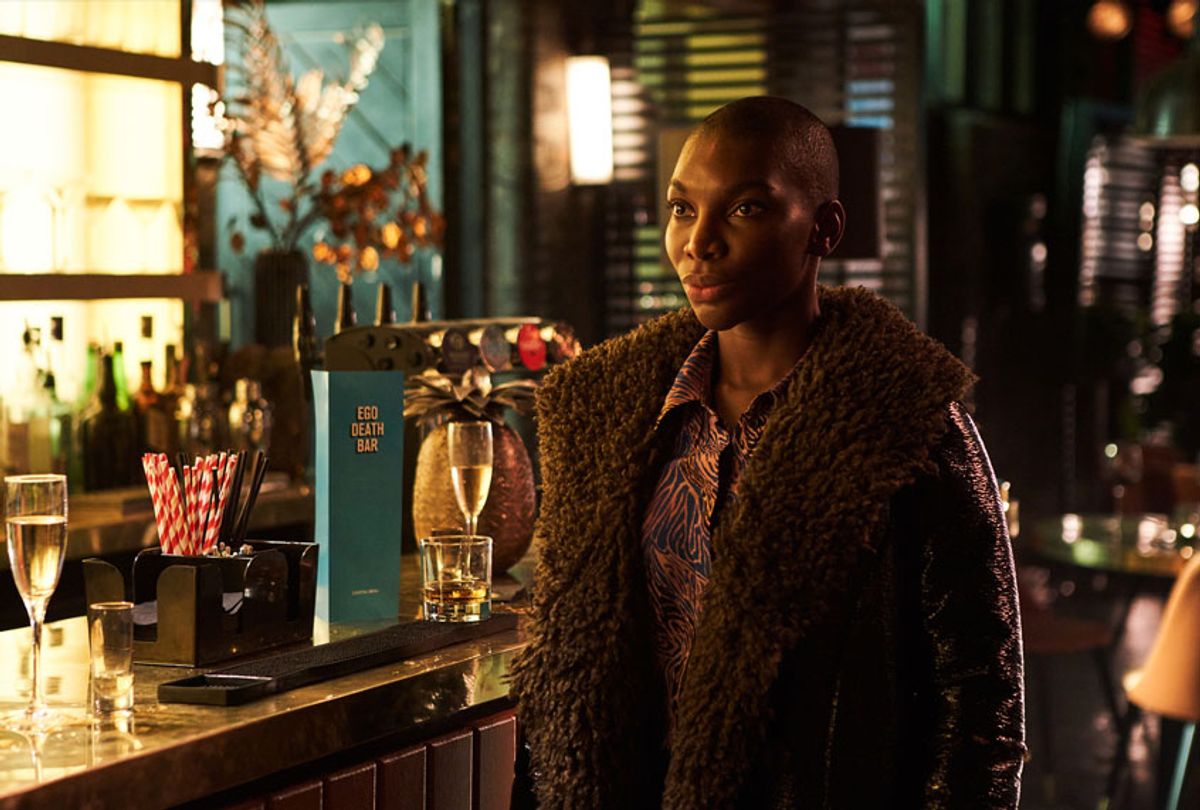 Sometimes the only satisfaction there is to be gleaned from being horrifically wronged is to take charge of the story, name the lesson within and walk through its darkness. "I May Destroy You" completes its heroine's journey by expressing this wisdom through multiple possibilities, all of which conclude with this singular truth.

For the entire season series creator Michaela Coel holds the viewers close as she recreates her own experience with trauma through her main character Arabella, a promising young writer on the verge of publishing her second novel when she's drugged, sexually assaulted by a stranger, and left to piece together the memories of what happened in the wake of that violation. The finale is titled "Ego Death," taken from the name of the chic London bar where Arabella was drugged and abducted by a man who goes on to rape her. It's also a psychological concept explored in other literary sources, all of which are applicable to this episode and the series in general.

Over the course of "I May Destroy You" Arabella stakes out Ego Death from a place across the street, hoping that a glimpse of something or someone familiar would jog her memory. It's a solid plan for solving a mystery; for whatever reason the perpetrator can't help but return to the scene of his crime . . . which he does, at long last.

Arabella's eyes fly wide open in shock when she sees him, realizing the moment she's been waiting for is at hand.

Now what? Revenge? Compassion? Prosecution? Coel, through Arabella, chooses all and none, allowing for a new type of brilliance to light the way ahead.

"Ego Death" is the culmination of Arabella's winding journey through the part of her story she never chose and as a result cannot easily write. Extreme imbalance colors the plot threads unspooling after Arabella's assault, with her moods becoming more erratic as fragments of memory return.

A crucial step to understanding what transpires in the finale lurks in the penultimate episode of the season, where Arabella obtains guidance from a writing peer whom she initially believes to be the mirror image of herself. In meeting her previously unknown idol she realizes everything she presumes about the person is an illusion; I won't spoil the surprise of that twist. Suffice it to say it serves a purpose beyond simply jolting us with surprise. It brokers a bridge, allowing Arabella to obtain what she truly needs: a framework to write a new plot.

Together they jot down notes on cards and tape them to the walls of her bedroom, building her story into something solid, a favor that memory hasn't granted her. Her ally points out the novel Arabella intended to write was supposed to revolve around the theme of consent, like the series itself.

Neither was ever about that, as it turns out. The real moral of the story lurks in the season's opening installment and is named in the finale. In this ambiguous ending, "I May Destroy You" becomes the story of an individual's disintegration and rebirth.

With her thoughts organized into a structure, all that's left is the ending – and the engine for that is right in front of her and her best friend Terry (Weruche Opia), who happens to be at her side. And, she tells Terry, she has a plan. Arabella calls their old high school friend Theo (Harriet Webb), changes into shiny, avant-garde black vinyl dress she happens to have with her and dons a white pixie wig. From there she saunters up to the man who raped her as he casually stands by the bar, and dangles herself as bait.

True to her expectations, he attempts to repeat the crime. Only now Theo is watching, Arabella knows better than to down her drink, and Terry is there as a backup, distracting the man's accomplice.

Arabella pretends to become woozy again, and the rapist steers her into the bathroom and takes her panties. But the women are ready. Theo has pickpocketed the drug, prepared it in a liquid and placed it into a syringe. On Arabella's signal, Theo injects the man with his own malevolent medicine. They keep him long enough for the drug to take effect, then follow him as he runs out of the bar until he collapses in the street, realizing they have to reclaim her underwear . . . which is now evidence.

Arabella then violates him before beating him to a pulp. Afraid to leave him in public, she takes him back to her apartment and tucks his bloodied and possibly dead body under her bed with the rest of her old secrets.

Arabella and Terry head in Ego Death, only now they're following Terry's plan. Terry gets her friend massively high on stimulants to counter the date rape drug, and Arabella again puts herself in the sights of the rapist – only this time, she's not wearing a wig or any disguise. She's just a heightened version of herself . . . and she drinks the drink.

As the man pulls Arabella into the bathroom, Terry calls the cops, with the idea of having the officers catch him in the midst of the crime, making his guilt irrefutable. By the time they get there, though, both Arabella and her rapist are gone. She has jumped to her feet as he's unzipping her pants, surprising him – but also terrifying him. He threatens her, but when she refuses to show fear, he collapses and even reveals that his real name is David. She takes him back to her place.

While they sit on her bed – which, again, baffles David –  Arabella listens as he unburdens himself, confessing to all manner of sexual assaults and quivering as he talks about being twisted by abuse and begs her not to leave him alone. The cops arrive anyway, and before they can take him away, Arabella embraces him.

Next we're presented with a fantasy of consent and control, where Arabella shapes the terms of the encounter. She walks up to David, whispers something in his ear that's never revealed, and after furiously making out in the bar's bathroom stall, they head back to her place. Next comes a carefully constructed and splendid love scene, crafted to highlight the pleasure Arabella and David take in each other's bodies, climaxing with her on top, penetrating him.

He's still there when she awakens the next day, smiling lovingly at her and informing her that he'll only go if she wants him to. Go, she tells him. At this he calmly rises out of bed and walks out of her bedroom door, entirely nude . . . followed by the version of him that crawls out from under her bed, still beaten and bloody, and follows his romanticized, vulnerable incarnation out of Arabella's life.

Coel has fielded multiple interviews about "I May Destroy You" and the part it has played in taking her work to the next level. "Chewing Gum," her Netflix debut as a series creator, announces her as a talent to keep in an eye on; this marks her as a creative force to the reckoned with.

The unfortunate connective tissue between "Chewing Gum" and "I May Destroy You" is a trauma she sustained while she was creating the second season of that comedy: in the midst of a marathon all-nighter, she took a break to meet a friend for a drink, was drugged, passed out, and sexually assaulted by two men.

The scenes of Arabella's assault mimic this incident, but the experience of all that happens afterward is the well from which "I May Destroy You" draws its essentiality. But it all comes down to what that bar represents.

"Ego death" is a term also present in Joseph Campbell's description of the hero's journey. It describes the warp and fracture of the previous sense of self and the eventual acceptance that the only way forward is through, that the persona that was must fade away to make room for a stronger, wiser self.

For most of the season Arabella's obsession with bringing her rapist to justice lurks behind her messy struggle to figure out her own self-concept. She lashes out at her friends, even her close mate Kwame (Paapa Essiedu), who is a rape survivor himself.

Arabella rages against the writer's block preventing her from completing a draft of her new book and getting it to her publisher on time. What sheen she once enjoyed as a promising writer vanishes with her contract. She becomes addicted to social media, where her extreme openness wins her empty adulation and anonymous abuse. She does what she can to press her case forward with the police until they hit a wall and cease pursuing suspects.

She comes apart at the seams in ways large and small until, at long last, she glimpses the man whose flaring nostrils and angry face have been dancing in and out of her memory.  But in the end, when she has her shot at revenge, she chooses a spiritual resolution, sitting her serene flat mate Ben (Stephen Wright) and watching his plants grow.

Time passes, Ben's deck garden blossoms into fruit, and Arabella, after so much tribulation, self-publishes her very different and triumphant next book.

The final act of "I May Destroy You" defies the common conventions of catering to the audience's presumed need for concrete closure. Viewers adore open-and-shut stories where the protagonist somehow obtains justice. When the law can't help the wronged party, they might take matters into their own hands to obtain the satisfaction they've been stalking.

Life is not like that. The depressing statistics pointing to low conviction rates for sexual assault, and the dead end in Arabella's case, tell us that a clean ending would be a lie. Coel's refreshingly unreal path in the finale takes on a new kind of power when viewed in that light, and it fits with her and director/co-director Sam Miller's presentation of Arabella's life as a montage of fantastic visual allusions. In one example earlier in the season, an expedition out for a night of painting and wine with Kwame and Terry, friends who patiently abide her fits of anger, shows them dressed as angels with her as a winged demon in black vinyl.

A disastrous return to Italy, where her lover shuts her out of his place (understandably) and leaves her to sleep outside, leads her to wander into the ocean, unmoored, and disappear under the water – not drowned, baptized. Music choices woven throughout the series (some selected by Coel, others placed by music supervisors Ciara Elwis and Matt Biffa) add their own subliminal messaging, with a few artists appearing time and again. One whose music Coel calls upon in key turns is Janelle Monae, particularly selections from "The ArchAndroid," Monae's concept album that tells the story of a synthetic being who learns how to become more human.

Two pieces from that work stand out in the finale, each narrating the weight of the choices before Arabella through swelling strings and Monae's ethereal spoken musings, asking her and the audience to contemplate which offers the best path. The heroine chooses another way entirely, one that turns out to be profoundly heartbreaking, astonishing and gorgeous, and not at all where we suspected she would take us in the first place.

The "I May Destroy You" finale is far from the only instance of a storyteller choosing an unconventional ending. But it confidently meets the expectation the creator promises to the audience at the series' outset. Most importantly I'm guessing it meets the pledge she made to herself. Resolution is a fine outcome, but revolution is even more fulfilling – and Coel, through her brave and open vision, gifts us with both.

All episodes of "I May Destroy You" are currently streaming on HBO Max.