As with all things made to be mindlessly inhaled over the holidays, gorge now and think about its flaws later 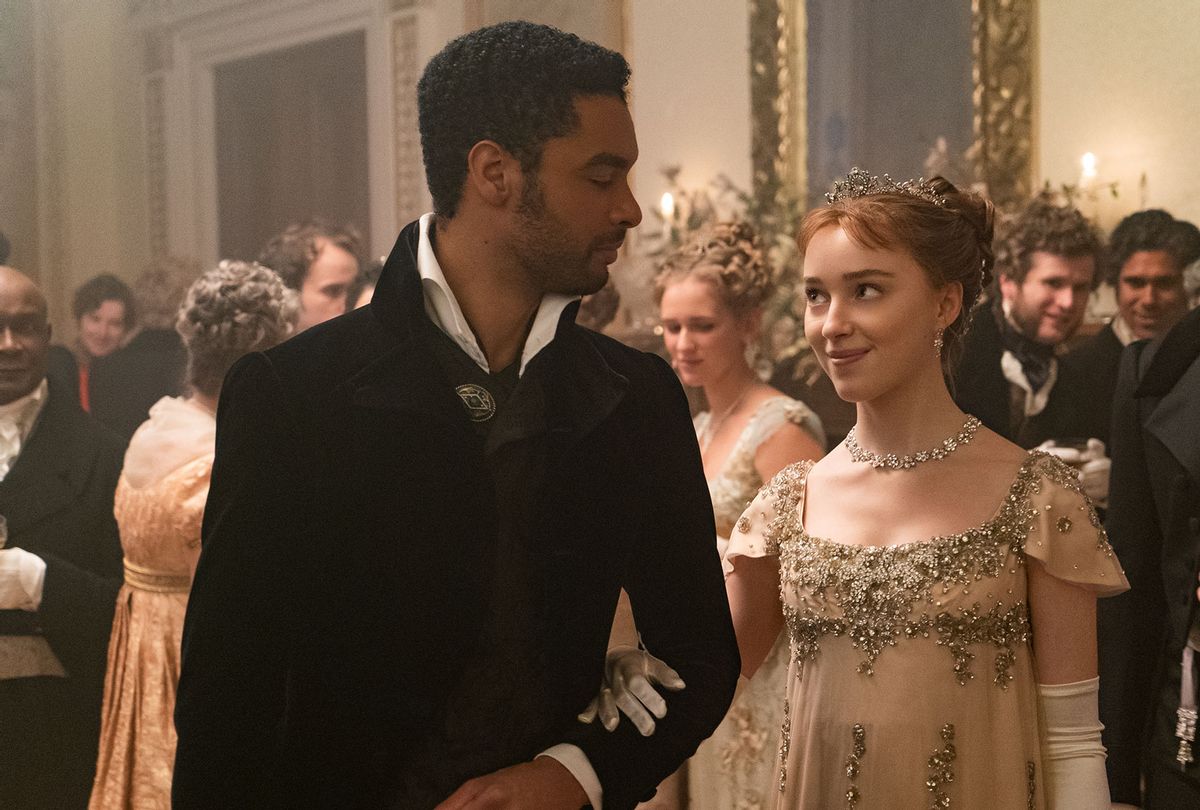 People with hearts set on spending Christmas Day  inhaling new Netflix series "Bridgerton" would best be served resisting the urge to compare and contrast it with strict Jane Austen interpretations. Some association is inevitable, as would be true of any story set within the bustle of Regency London society's upper crust. Austen reigns eternal as the queen of the form, and author Julia Quinn's series of "sensual" novels, from which the series is adapted, are patterned after what she wrought.

But "Bridgerton" is a Shondaland creation through and through – an idealized vision of a world where everybody's a little bit randy and nobody notices race. Specifically, it is the first product of Shonda Rhimes' reported $150 million deal with Netflix, brought to us by protégé and series creator Chris Van Dusen. And while it may not qualify as an instant classic, or even very good, it is good enough to smooth out the raggedy ending of 2020.

All the graces and visual splendor one expects of some dream version of 19th century England seduces the eye on the front end, but beneath this show's heaving decolletage beats the heart of "Scandal" and lust of "Grey's Anatomy." That is to say, this is a show devoted to casting the broadest of broad nets: careful social politics informing each character's move, interrupted by interludes of banging in back rooms and, in one very early moment, against a tree.

"Bridgerton" takes the physical yearning present in Austen's work and expands it into full-blown humpery during the back half of its eight-episode season, positioning all the exquisite balls, soirees, garden strolls and afternoons chastely nibbling ladyfingers with gentleman callers that are the hallmarks of Regency Era literature as extravagant pre-game stimulation.

Devoted Austenites could be scandalized. They might also want to loosen those bodice laces a little and settle in because honestly, for a little while this confection is all anyone's going to be talking about.

"Bridgerton" stirs cravings – for fancy cookies, mainly (the gentleladies do love their sweets!) but also for pops of wild floral colors and sparkle in all its forms, be it jeweled, fireworks or raindrops on roses. Netflix knew exactly what it was doing in releasing this as a holiday bauble – especially on this holiday, at the end of a miserable year.

Between the opulent set design and lavish costumes all lit and filmed to inebriate the senses, the production transports us to the center of its fantasy, making the narrative and dialogue secondary to the series' success.  Both those aspects do the job by the way, and follow the melodic pattern Austen established on the page; this is merely to point out that little jumped out from the scripts that qualifies as highly quotable.

"Bridgerton" really could use its own Violet Crawley, in other words. The imperious Lady Danbury (Adjoa Andoh) is the closest we come in that she does not mince words or suffer fools, but what style she has shows through her fashion . . . which, to be fair, is to die for. (Her top hats alone are enough to send a person down an Etsy rabbit hole.)

As for the story . . . honestly, if you've seen any modern film adapted from Austen's work, you've a notion of what to expect; now amplify the gaudiness and camp and banish the stiffness, save for those antiquated ballroom dances. A touch of the staid nature that crispens past films and BBC productions based on Austen's work remain in play here, but Van Dusen gussies things up to appeal to the "Gossip Girl" constituency.

Narration by a society pamphlet writer who goes by the nom de plume of Lady Whistledown provides a place for these two audiences to meet; Lady Whistledown has the goods on everyone in the "ton" (the colloquial name for high society in that era) and keeps everybody on their toes.

That the mysterious character is voiced by Julie Andrews further strengthens said bridge between classic and popular tastes. Somewhere between the two dances a line of anachronistic details, few more noticeable than the classical music covers of tunes by such artists as Ariana Grande and Taylor Swift.

But if you don't recognize the familiar pop song hooks here and there, whatever. The central charm is in the barely subtle rivalry between the Bridgertons, whose eldest daughter Daphne (Phoebe Dynevor) stuns in her society debut before the imposing Queen Charlotte (Golda Rosheuvel), and the status-hungry Featheringtons, whose family name is ludicrous and style, garish (and yet both mother and daughters have bolder gowns than the Bridgertons; go figure!).

Daphne starts the season in an enviable position but thanks to spirited cockblocking by her oldest brother Anthony (Jonathan Bailey) her prospects soon dwindle from an ocean of suitors to one persistent wretch with weird lips and broad gums.

Enter Simon Basset, Duke of Hastings (Regé-Jean Page), whose emotional unavailability, ill-temper and astronomical hotness make him the catch of the season. Simon rolls his eyes at all the women throwing themselves at him – save for Daphne, who claims to harbor no desire for him. Thus they strike a bargain, pretending to court so that the ladies will back off and the eligible men will try to win Daphne away from him.

As negging experts may guess, their initially platonic partnership progresses as one may predict, eventually culminating in marathons of furious rutting with very little foreplay in bedrooms, on stairs, even atop a lawn or three.

The Featheringtons are not as lucky, especially when their cousin Marina Thompson (Ruby Barker) joins them and surprises them by being a gorgeous flower as opposed to the bucktoothed bumpkin they were expecting. But Marina is not entirely as she appears. The same is true of many of the figures here, from Anthony, who hides a highly improper affair with a soprano, to his younger brother Benedict (Luke Thompson), who is lured into the more licentious side of the aristocracy.

All main roads lead to boinking anon, yielding subplots that poke at the stifling mores of a patriarchal era where men are free to roam and act as they please whereas for women, the smallest misstep can lead to ruin. Related discussions about honor and the worth of marriage occur within each drama, as does a twist related to, ahem, bodily fluids – all of which tips its hat to Austen's protofeminist bent while also taking matters to places that probably would have made her pass out.

Few gems are without flaw, even the prettiest of them. I suspect that it won't be long before analysts dig into the production's deeply suspect definition of inclusive casting as it manifests here, and they're not wrong.

While Rhimes and Van Dusen strive to break away from the all-white casts that have been the standard Austen tale palette set long ago, viewers aware of the role colorism plays in casting are going to have a few things to say about the fact that most of the Black characters playing major roles are light-skinned, starting with Page and ending with Rosheuvel, Parker and Kathryn Drysdale, who plays Genevieve Delacroix, dressmaker to the socialites.

To any who may say, "But those are four featured actors!" keep in mind this is a large, mostly white ensemble, and most the non-white characters populate the show's sea of extras and non-credited characters. "Bridgerton" in this respect is no great leap forward for inclusion but rather a hop from total whiteness to a teeny, tiny dot on a nearby tile.

That said, casting Rosheuvel as Queen Charlotte, the hub of power in this hive, can be interpreted as a nod to better intentions. The actual Charlotte is the subject of speculation over whether she had Black ancestry, explored more than a few times in the lead-up to Meghan Markle's wedding to Prince Harry. People who know that story might appreciate the show's choice. People who don't will surely enjoy Rosheuvel's mirthfully intimidating performance. Everyone watching will note that the Queen is, at best, a risky shade of beige.

Calling attention to these points matters, regardless of whether ones argues that these concerns are beside the point of a fictionalized historical tale mainly informed by class instead of race, which is in keeping with the Regency oeuvre. This also is an excuse given and heard many times whenever creatives are confronted about homogenous casting choices.

Another very valid response to all this is that maybe for one (more) day (in a string of days, years and decades) those of us who are tired of witnessing the hollow result of so-called raceless casting can either not watch or maybe decide to not care. (Again.)

For most, "Bridgerton" only needs to be the fluffy tail on a beastly year.  Despite its very real imperfections nobody should torture themselves for succumbing to whatever enjoyment it offers. Look at it in the same way you might view the combinations of sugar, flour and fat we're inhaling with abandon right now: eat heartily, love the sweetness, and save your worry over the longer-term impact for that inevitable post-holiday comedown.

All eight episodes of "Bridgerton" are available to stream on Netflix starting on Dec. 25.