Mj Rodriguez bids farewell to "Pose" and playing Blanca: "I don't want to let her go" 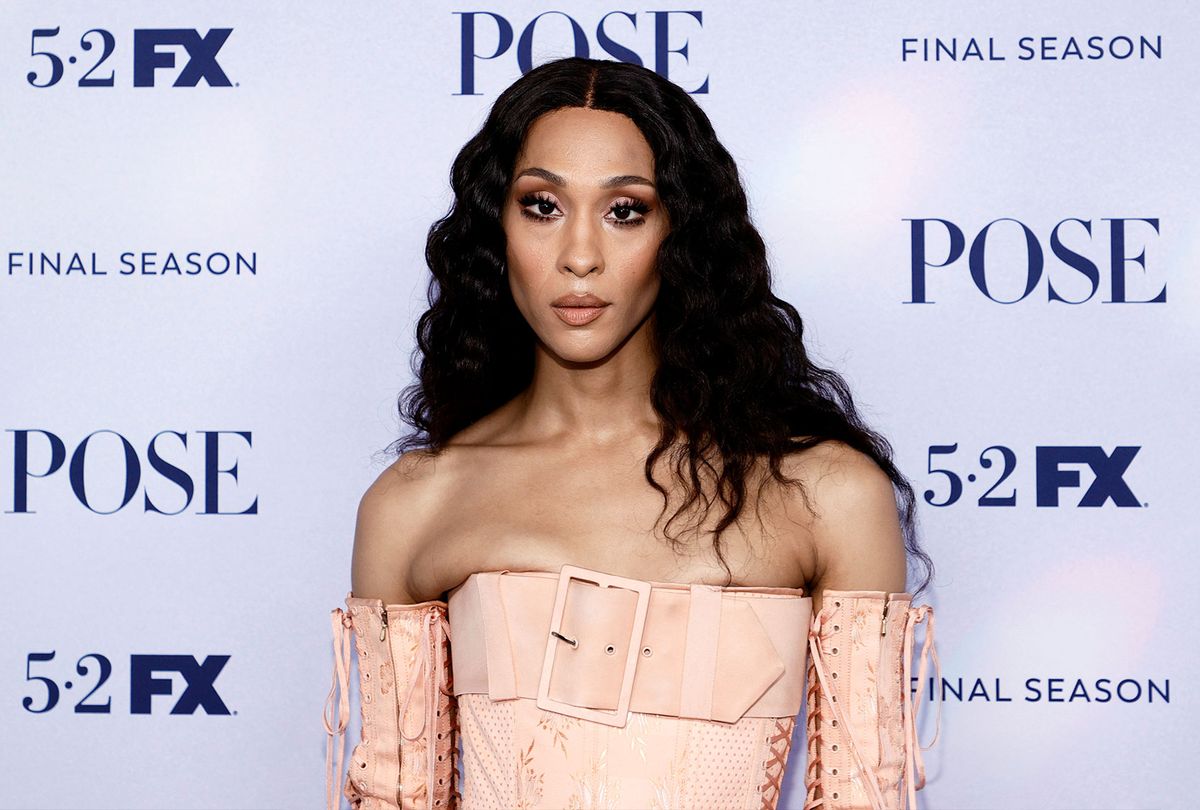 Just as Pride Month is starting, "Pose," the groundbreaking, award-winning series about the New York City ballroom culture in the '80s and '90s, is winding down after three seasons. Mj Rodriguez, who plays beloved house mother Blanca, is already up and running with a new series, but she's not quite ready to say goodbye yet.

The actress, singer, and stage veteran appeared on "Salon Talks" recently to discuss how "bitch-ass Rona" impacted her family, what ballroom taught her about "hard love" and using her platform to "knock some sense into people."

You can watch Rodriguez's interview here or read a full transcript below.

How are you doing, Mj, with this life-changing experience wrapping up?

Girl. I was okay in the beginning and now I'm a wreck. I'm sad that it's coming to an end. I love that we've crossed all the T's and dotted the I's beautifully, but I'm emotional. I just like watching it. I'm like, "Blanca, baby, I just want to hold your face in my hand." I didn't get a chance to look at her. Now I'm looking at her and seeing her instead of seeing the person behind, which is me playing her. It's just been beautiful seeing just all the growth of all the characters and getting to know them once again, officially. It's a dream, but it's sad.

What did it feel like returning to this show and these characters after you had to shut down production a year ago because of COVID?

It did. My grandmother and my aunt passed away from it during this time. When we closed down and got the notice that it was going to actually be three weeks instead of two weeks, I knew it was going to be longer. But from my grandmother passing away to us not knowing when to go out, how to go out, it was just a mixed kind of feeling.

It happened so quickly; so much growth happened. I still have a lot of my innocence, but there was some time for me to learn within this time of Rona. We went back and we were like, "Oh, okay, this is new." And then the next day we went right back to normal. But it was alive. It was alive.

You have talked about how a lot of younger viewers don't really know about the AIDS crisis, don't really know how politicized it was. Now, are people approaching you and saying they get it differently now, they understand this history because they're living their own version of it?

I receive it on the daily. Specifically the younger generation, they're seeing how much it ties in because now they know what it's like living in a pandemic and how it affects a whole bunch of people. A lot of kids come to me and say, "Now I understand why we need to release the stigma of HIV and AIDS, because it shouldn't be something that's held over your head." And I'm living for it. I'm like, "You're 14 and you know [how] all of this already works. Okay. We're going to keep teaching you, come on here." They're learning. Also, within them learning, they still manage to be themselves. I love it.

Let's talk about Blanca. You know how her story turns out, you know where we are at the end of it. Is it what you wanted for her? Is it different? Just this season alone, we've seen things that have been very surprising.

It wasn't surprising to me. When I read the script, I saw it as fit and I loved what people will see coming. I love that people will see that not only did her children receive everything that they wanted, living a life of normalcy in a world that doesn't necessarily beat down trans women, but also specifically for Blanca, the hopes and dreams that she's had, they're being achieved. She's getting all of the love and accolades she deserves from her community. That's what I love seeing. I'm so happy that it ended the way it did and that we tied the knots and crossed the T's dotted those I's the right way.

It ended the right way. I'm excited. I'm extremely emotional. I don't want to let her go. She just started teaching me in third season. Honestly, Michaela Jaé did not pay attention. Michaela Jaé just showed up to the job and did the work because she knew what she had to do. But third season and literally two weeks ago, that's when it hit me. That's when it really emotionally started pulling at my heartstrings. I finally saw Blanca, and not just saw Mj on a screen, judging herself and being insecure. I got to actually watch Blanca and take myself out of the equation. And I bawled because she is such a sweetheart. I believe I'm a good person, but Blanca, she's an angel. I just aspire to be like her. I aspire to be a leader. I want to keep things going.

This is not just a show about trans people's struggles. This is about joy and hope. Having that within stories that are really sad and really hard, seeing that joy, seeing that love, seeing that triumph and success is ferocious and powerful.

Yes, indeed. It is. We got to see that in every single last one of these characters.

You came up a little bit in the world of ballroom. I'm wondering what that taught you about this world, these characters and the way that they interact with each other and the demands that they put on each other.

Being in the world of the balls and being in the world of ballroom, you have this automatic connection of knowing that you're different. There's that right there. There's that instant connection and communication. Right there alone is the understanding. But more than anything, speaking specifically about the demands, there's a growth that happens quickly when it comes to LGBTQ people of color. With that comes mothers and fathers and brothers and sisters and developing those relationships. The reason why those demands are so hard is because they want to see you succeed. Sometimes it may come in a form of quote, unquote, "hard love."

I've received hard love too. I like calm love, but even though it may come off that way, it's still love and they're doing it to better you because there's a world out there that may not even accept you. The ballroom scene is rooted in familia, it's rooted in growth and learning and knowing what it's like to be marginalized and have so many different types of intersectionalities. That's what the ballroom scene did for me. It taught me. Not only did that teach me because I was going there from time to time throughout my four years before I delved into acting, but I had it from my mama too. She was a part of the scene when she was younger and she had friends who were in the scene. The ballroom scene is very powerful, especially for people of color.

We're in this place now where there is visibility; there are mainstream TV shows that win Emmy Awards that are showing trans people of color. Yet this year more anti-trans bills have come forward into legislature than ever before. You are very motivated. You have a platform. What gets you motivated and gives you hope?

Humans. I know that sounds cheesy, but it's humans. I pay attention to all types of humans. We have communities that we're close to that give us titles. I mean the straight community go by heterosexual, now cis. We have the LGBTQIA community, the POC community, all different types of communities. But at the end of the day, it's humans. I look at the actions of each and every last one of us, including myself. And I'm like, okay, so we have more in common than we think we do. That's what gives me hope. If I finally have a platform to speak for all humans, not just one specific [group], but being intersectional, then that gives me hope to change and to possibly knock some sense into people intimidated by us or afraid of the power that we could have and how we'll use it.

There are a lot of us out there that know how to use our power, through voice, through art, through whatever they choose to. I'm one of those people. I'm glad I can be one of the examples, amongst many like Laverne [Cox] and Trace Lysette and Alexandra Grey. These are so many trans women out there who are setting the tone for what people think and what may possibly be palatable for them. We're changing the landscape.

It goes back to those 14-year-old kids who are learning lessons and learning their history, and creating a new truth and a new reality.

And they love it, girl. I never thought as an adult now, that 14-year-old and 15-year-old kids would be hitting me up saying, "I want you to be my auntie." I'm like, wait, what, how? I thought your parents probably raised you not to talk to an individual like me? They go on and they have conversations with me, and I'm open to have a conversation with them. They want to know. Even though it takes a long time for change, change still happens.

Seeing that change, and seeing it happen faster than it was maybe five years ago, I'm living for it. I love that these kids are educated and they're not afraid to protect us. If they're in high school and they have a little crush on a trans girl or a trans guy, there's not a problem with that. I'm glad that they're learning this, and it's not being seen as something that's condemnable. I'm trying to be an example to just to show them you can be bomb and live your life.

It was just recently announced you got something pretty cool coming up on Apple TV+ with Maya Rudolph, called "Loot." Tell me about it.

"Loot" is about this woman named Molly who recently gets divorced from her husband. She now finds space for herself and within finding space for herself, she goes back to one of these places that she owns due to her husband. She meets this woman named Sofia, who is the boss of that place. And there's this amazing, beautiful relationship between the two, because even though Sofia is boss of this place, she still has to answer to Molly. I think there's going to be so much fun between that dichotomy and yeah, she's no games. She loves Molly to death, but she also knows that sometimes the whip got to be cracked.

I want to know what else you've got going on and you've got cooking. You said just in an interview you really would like to be doing some stuff that's a little darker and a more dramatic.

I have something that's on the horizon and I'm really excited about that's very dark and scary. It might shock you a little bit. I'm not going to say what kind of film it is because it'll give it all away. But yeah, I'm working with some darker things, and I'm excited for that.